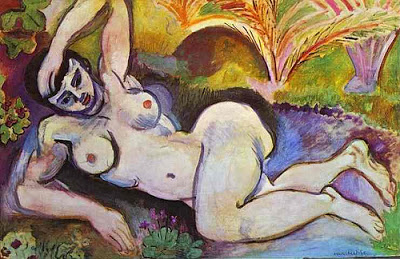 This post coincides with David Scott Allen’s current post (5/26/12) on Cocoa & Lavender.  Entitled “When A Brownie Isn’t A Brownie,” David writes about two desserts that may well have been served on Saturday evenings at 27 rue de Fleurus in Paris in the early years of the last century.

We had dinner with friends in Manhattan a few weeks ago.  The discussion naturally gravitated to what we were doing for the weekend.  Somewhere between the antipasti platter and my ragu alla Bolognese with fresh tagliatelle, I mentioned that we were going to see the New American Wing at the Metropolitan.  Suddenly, our friend Mary Bartos, a native New Yorker and art aficionado when not running her Upper East Side boutique Pan American Phoenix, sprang out of her chair, saying something about Gertrude Stein.  She was so excited that I couldn’t understand what she was saying “You simply must see the Stein Collection,” she said emphatically.  “The American Wing will be there this summer and every one after that, but the Stein Collection won’t and you must see it.”

Mary was right.  The exhibition, in its last days of its third and final venue, the Metropolitan Museum of Art in New York, is a formidable collection of about 200 pieces of art—paintings, drawings, prints, sculptures, letters, and illustrations from books—by Matisse, Picasso, Cézanne, Toulouse-Lautrec, Renoir, Manet, Gaugin and many other members of the Parisian Avant-Garde.
Although this is a blog about Provence, I had to find a way to write about this extraordinary…exhibition in New York, which is about a family of rather eccentric American intellectuals who collected the paintings of artists in Paris in the early 1900s, artists who, little did they know, would come to dominate modern art across the globe.

What is the Provence connection?  Matisse, Picasso, and Cézanne, whose works dominate the paintings in the exhibit.

Provence was the subject of many of their paintings, especially Paul Cézanne who was born in Aix-en-Provence and single-handedly made famous Mont Sainte-Victoire, the mountain overlooking his native Aix.

Henri Matisse fell in love with the Cote d’Azur, where he captured many domestic and coastline scenes in and around Nice.  The Rosaire Chapel in nearby Vence, where Matisse devoted four years to the architectural design of the building and every decorative detail, including the fabulous stained glass windows, was  the “fruit of [his] whole working life.”  He considered it his masterpiece.

Pablo Picasso was connected to several places in Provence and eventually bought a chateau in Vauvenargues, near the birthplace of Cézanne whom he felt was the father of his artwork.  The artists’ hectic lives in Paris were punctuated by frequent vacations in Provence and all chose to live out their final years in Provence.  All are buried in Provence.

As for their paintings in Provence, there is the Matisse Museum in Nice with its lovely collection of over 60 paintings, some drawings, etchings, and a nice collection of sculptures; the Picasso Museum in the Château Grimaldi in Antibes with around 150 paintings; and the Granet Museum in Aix-en-Provence where there are a handful of Cézannes (up from zero just a few years ago).  Really, there are other more compelling reasons to visit Provence. To see their work in France, go to Paris.

Or in the States, to see an unparalleled collection of Matisse, Picasso, and Cézanne, go to the Met…even if you are planning a trip to France. 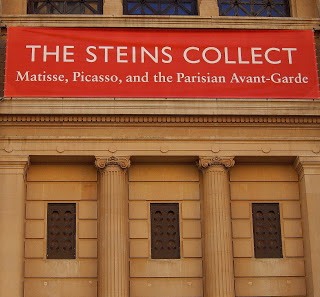 The Steins Collect: Matisse, Picasso, and the Parisian Avant-Garde closes on June 3rd. If you who are drawn to the artists who defined the dawn of modern art, get into New York this week and see this incredible collection.  You will leave in awe, gasping for adequate superlatives to fully describe what you have seen.

To think that most of these works hung on the walls of two apartments in Paris—27 rue de Fleurus and 58 rue de Madame, owned by young, not especially wealthy American siblings—is simply remarkable. Gertrude and her brother Leo Stein arrived in Paris from San Francisco in 1900 and their brother Michael, accompanied by wife Sarah and eight-year-old son Allan, came four years later.  They were three of five siblings from an immigrant German Jewish family.  Born in West Allegheny, Pennsylvania, they lived a comfortable life in Vienna, Paris, the San Francisco Bay Area, and Baltimore.  Their brilliance was evidenced in many ways as their art collection would eventually demonstrate but they were also well educated:  Leo studied at University of California Berkeley and Harvard and Gertrude at Radcliffe College (“the Harvard Annex”) and Johns Hopkins.

Unlike other Americans who traveled to Gay Paris at the turn of the century, pockets lined with money and in search of art mainly as a source of investment that they quickly shipped home to their mansions, the Steins, although by no means impoverished, often had to pool their money to buy their art and it stayed with them in Paris.  And with such limited funds, they were confined to artists who were just arriving on the Paris art scene.

This was radically unfamiliar artwork and many people thought the young Steins were crazy to spend their money on artists with little or no track record.  Pablo Picasso, said to have been dubbed ‘the crazy Spaniard,‘ and Henri Matisse, whose “Woman with a Hat” made people laugh, were the artists that the Steins befriended and whose art graced their walls from floor to ceiling.  Their growing collections comprised so many emerging artists that the Steins were soon compelled to open their homes so others could see these works.

Saturdays at theSteins’, as these salons came to be called, were irresistibly popular venues in which to learn about cutting edge contemporary art, discuss philosophy and William James’ theory of the stream of consciousness, and to see and be seen for the next four years.  The art was certainly not universally liked or even respected—as the current exhibition makes clear, many visitors were repelled by it.  The Steins, like their artwork, were not exactly conventional either but their eccentricities probably provided comfort and their salon a refuge for struggling artists not yet confident in their pursuit (as well as others who relished the thought of a captive audience). Little did the Steins or their guests know but these Saturdays included a veritable Who’s Who of artists who would eventually become some of the most famous artists of the 20th century.

The Saturday Salons lasted until about 1910 when, as Gertrude put it, the artists were known and even had their own agents.  Leo had moved out, Alice Toklas who would become Gertrude’s life-long lover had moved in, and Gertrude was intent on pursuing other interests, like writing. Sibling rivalry had clearly surfaced and tensions were mounting among the Steins—Leo and Gertrude, whose bond had started the project, were growing apart and eventually would go their separate ways over the direction of Picasso’s artwork (toward Cubism), supported by Gertrude and disdained by her brother, and over Gertrude’s lesbianism, about which Leo objected.  Leo moved to Italy. The War led to the dismantling of some of the art collection. Later, 27 rue de Fleurus would be the scene of other gatherings, but never with the same vibrancy that characterized the early years of the 20th century.  Some would say that the center of attention at the gatherings had shifted to Gertrude and her literary career, not nearly as captivating a subject as the controversial art the family had amassed.

The current exhibition consists of nine separate galleries—brimming with captivating paintings as well as postcards, letters, telegrams, personal photographs and furniture from #27—that tell the story of the Stein’s early years in Paris. Multimedia presentations supplement the exhibition making it one of the most educational shows I have ever had the pleasure of experiencing. There are some 60 paintings by Matisse, 40 paintings by Picasso, and at least a couple dozen by Cézanne among the paintings of many other now well–known artists.  It may take you several hours to make your way through this vast collection.

Can you imagine that this wealth of modern art hung on the walls of two otherwise unremarkable apartments in Paris and that every Saturday for several years the avant-garde filled those apartments with conversation, debate, and intrigue? The mere thought is enough to take my breath away. No wonder Midnight in Paris is so captivating. No wonder Alice B. Toklas’s brownies are so mysterious.

Picasso and the Parisian Avant-Garde, The Steins Collect: Matisse