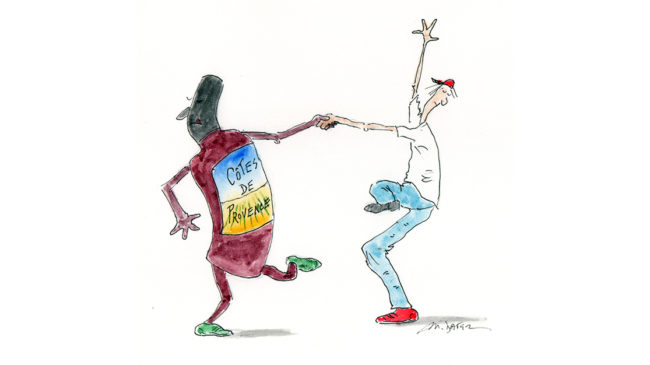 Raise your hand if you immediately recognize this title as coming from Dick Clark’s American Bandstand “Rate a Record” segment. Hmm, not as many hands went up as I thought would. Perhaps, readers of this blog were busy watching Julia Child’s The French Chef or Graham Kerr on The Galloping Gourmet or, as I think about it, perhaps many readers were not yet born. Dick Clark’s legendary TV show, on the air from 1952 to 1989, showcased at least one band and played the Top 40’s songs to which gaggles of teenagers danced the hour away. 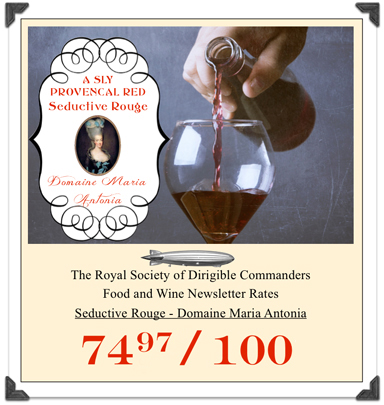 A fictitious shelf talker with Ratings

I am reminded of Dick Clark as I walk down the overstocked aisles in wine superstores these days and note the liberal use of “shelf talkers,” touting this wine and that wine and dominated by a large number.  Dick Clark had teenagers rate popular songs, on a scale of 35 to 98, but all teenagers—including me, watching from the comfort of my family living room—really wanted to hear was whether it was cool to dance to. The score was irrelevant.  Likewise with wine, for me, the various scores of wines are largely irrelevant. Some taster, at some given moment, made a personal judgment and put a number to it. Good for him, but for me? Perhaps not.  Most of the wines scored in America today are using a 100 point scale, promulgated to remind you that if you got a 93 in a Physics exam in school you had done great, so you should feel well about the 93 rating you see on the bottle displayed before you now (actually, I would have been overjoyed with a 75 mark in high school physics).

Nobody is touting wines rated at 75. The inference is that they are not allowed into the store, for fear of bringing shame on the wine merchant for selecting them. Where do they go? You won’t find them on WTSO (Wines Till Sold Out), principally a dumping ground of excess inventory, though not drawing from the ocean of common plonk which is very drinkable and awash in the market. Is there any stigma attached to listing such poorly scored wine? Of course there is. Just as I likely would throw away that physics test paper rather than take it home, no wine advisory is going to tout a wine as being worthy of some consideration if its rated under 80. Not good business, nor good for the image. But hey, if the wine is selling for $8.99, and is fruit forward and decently balanced, I will dance with it any night of the week.  For the past three years our white vin de table has been a California Chardonnay listed at $4.99.

Considering the three hundred year history of the British wine trade—Berry Brothers & Rudd opened in 1698—giving a numerical score to a wine would be considered a relatively recent phenomenon. When I first started taking an interest in wine, your pocket pal was a vintage chart card, which many wine shops made available to customers. Armed with that, when you opened The New York Times and saw a full page ad for a wine sale you had a chance to take some measure of the offerings.  Or if really curious, you could walk the aisles of a local wine shop, and quickly pull out your guide to check a vintage or two. Of course, there was no way of knowing which properties had faired better in tougher years—some did by picking before the rains came or being more selective in sorting the grapes. The only way to learn of that was from the merchant, or what had been written in books or periodicals. The pocket guide was of no help there.

In time, I came to learn that there were merchants that were happy to engage you in knowledgeable conversation. I will never forget picking up a half bottle 1957 Chateau Petrus with a price tag of $10 at Morrell’s in Manhattan. Happily when I queried owner Peter Morrell that it was likely mispriced he said it was not. The vines were still suffering the effects of a horrific frost, and the wine was not of its usual high caliber. It remains the only Petrus in my cellar.

Like so many things, wine appreciation was simpler then. There was more of an element of reverence for what the winemaker had brought forward from the vineyard. Before the Judgment of Paris induced the world to investigate California wine more seriously, my merchant (on the East Coast) choices came from a half dozen or so California Cabs, mostly coming from Napa. Today many shops provide twenty or so Napa choices, and the super stores even more. How does the plethora of Cabs now coming out of Napa distinguish themselves? By aggressively seeking the 90+ summit, glowing reviews, and most recently the anticipated caché attached to emerging new American Viticulture Areas (is terroir the most over-worked term in the industry today?).

For me, wine scoring took hold in late 1983 when I proposed to a few friends that we should meet three or four times a year to seriously taste some wine. We called ourselves “The Sunday Night Irregulars,” in deference to our host, a baker who only had that one day—Sunday—free each week. We tasted eight wines blind, always arrayed in two distinct groups of four, under a subject heading of some sort. By far the most memorable was “The 1966 Vintage in France – Bordeaux vs. Burgundy.” It was our wake-up call to Pinot Noir, then a grape practically unknown to any of us (Burgundy won by a large margin). The scoring sheets listed the names of the four wines in front of the taster. All one had to do was concentrate on the four wines just served, score, and then decide which wine was in each glass. Originally we debated serving in groups of three, but believed that if one wine was easy to identify then nailing the other two was like picking the right side in a coin flip. You had a 50% chance to guess right, and if you did, then voila, you got all three correct.  It was very much more challenging, even though you were confident you had one right, when there were still three wines to identify. We used a 20-point scale modeled upon the well regarded University of California, Davis scoring sheet. Up to two points for color, eight each for aroma and taste, and two for aftertaste. 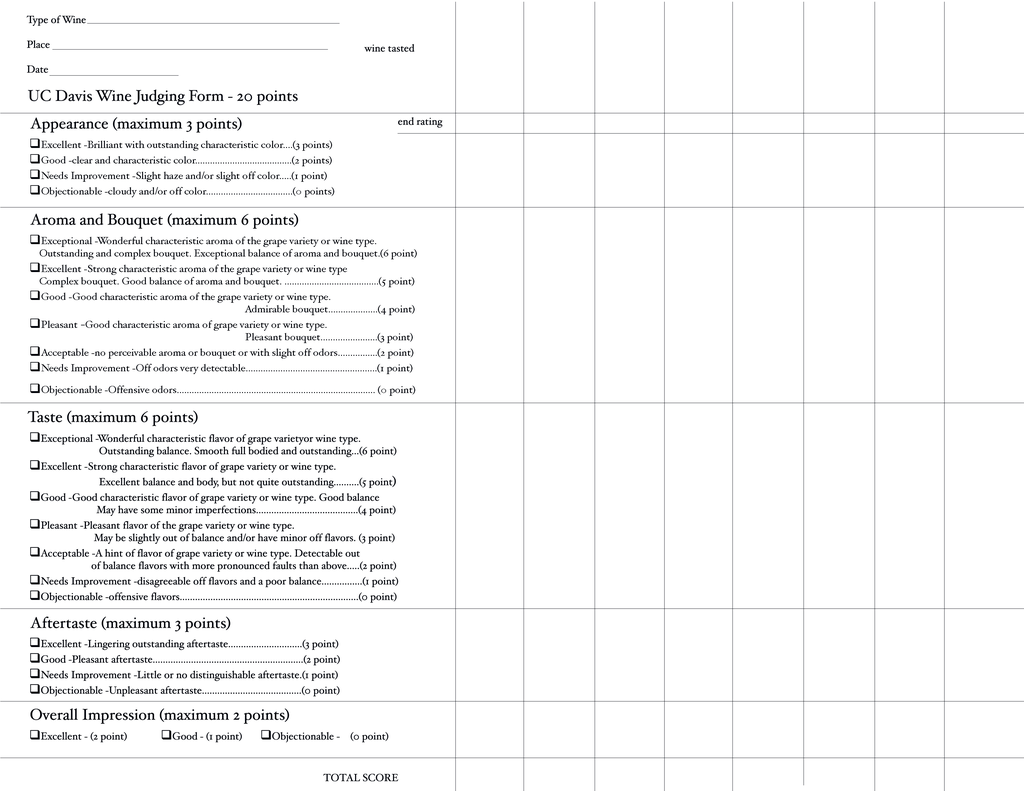 The disadvantage with this approach is that you need to provide the tasters with enough room to arrange their four glasses, and the nominal 8 x 10 scoring sheet to write upon. I no longer put anyone through this, as it inhibits the conviviality I seek in home entertaining here in America. If you walked in on us back then you might think we were accountants one hour away from finishing some company’s annual audit. We were a super serious tasting group, to be certain. When we moved to France, I introduced this approach to tasting to friends there and discovered it was more fun tasting on that side of the Atlantic. Our gang never let the reverence accorded such group imbibing in America interfere with their interpretation that first and foremost we were assembled to have a night of wine, food and merriment, accenting the latter. Dancing and champagne always ended the evening. If in the midst of the tasting someone started smoking it raised no eyebrow. Nor did spontaneous table chatter. I still recall one evening when a guest passed around a most unusual nudie magazine as we were holding our glasses under our noses. I could only smile then and wonder what our American tasting group would make of that. 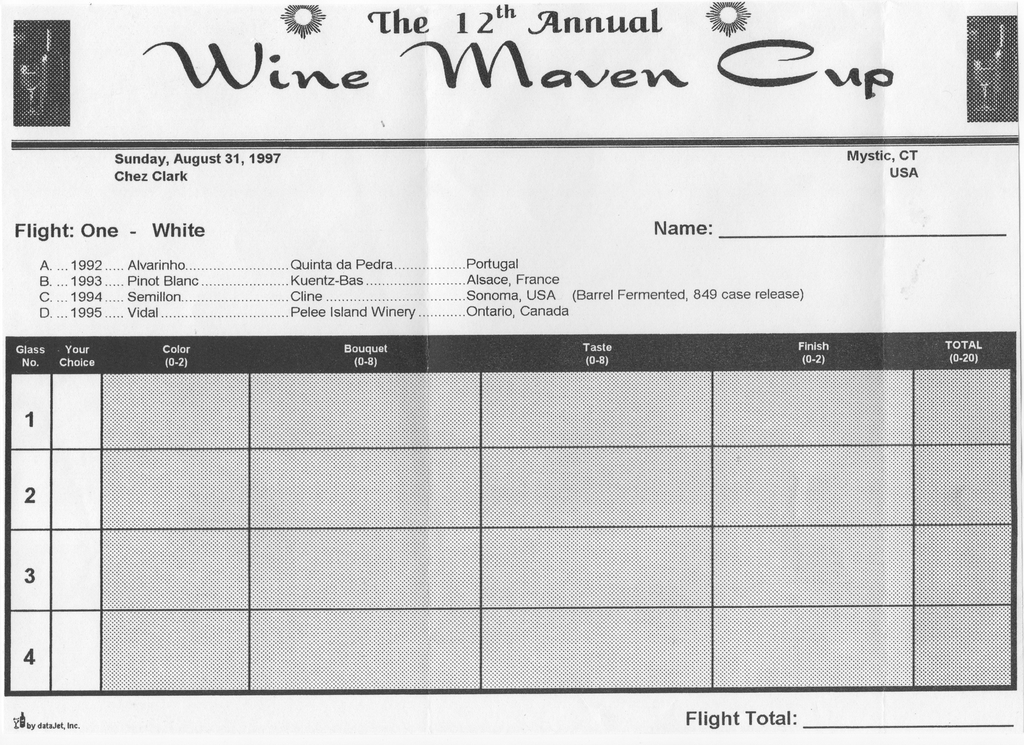 Though it is rare today, I do pull out those 20-point score sheets and set up four glass blind flights when I am sailing into what I consider unchartered water. A tasting I am thinking of now is with under-appreciated and under-valued Ugni Blanc and Rolle (Vermentino, as the grape is called outside of Provence). Blends featuring these varieties, normally in the $15-$20 price range, could stand up well in competitions with more expensive wines, in my humble opinion (and I am fearful that the huge clamor for rosé engulfing Provence will lead to a decline in their production in that region).

The scoring system can be whatever you want it to be. Today Jancis Robinson publishes her highly regarded evaluations using a 20-point scale, as follows:

Perhaps Robinson had the popular UC Davis system in mind as she launched hers some years back. There was no commonly used scoring system in effect in England at the time although the highly regarded Michael Broadbent, director of Sotheby’s wine department, regularly used a five star method. Robinson also may have been looking across the channel for guidance from the French (though I know most self-respecting Englishmen would never admit to any constructive influence coming from that direction). The 20-point system is very much in evidence in France. In fact, I can’t recall a published source, such as Gault & Millau, that does not use it.

Perhaps the inspiration there, as in America, is the domestic education system; secondary schools and universities in France employ a 20-point grading scale:

Five, ten, twenty or one hundred points, just pick one you like and stay with it…or opt for none at all.   If enjoying wine is anything, it is a hedonistic experience. Does it have a good beat? Is it easy to dance to? The score is irrelevant.

Did the satyrs score the virgins? I will go back and check my Rabelais Reader, but I think not.