I love arriving at a dinner party knowing that it isn’t going to be a “state affair.” I want to relax – from the apéros to the dessert – and none of it need be fancy, especially the food and wine. (N.B. I still want crystal, silver, and linen…) Today, I made a Crumble au Poulet – simple, elegant, and very tasty fare. To serve, I wanted something that would match the simplicity of the meal, and yet be sophisticated and complex. I also needed something to go with a bit of spice, as the crumble topping is laced with a sweet curry. I chose a 2013 Domaines les Fouques Cuvée de l’Aubigue, and was not disappointed. On the nose, I was greeted by honeysuckle and a dish of cinnamon.
We are grateful to David Scott Allen of Cocoa & Lavender for developing an original menu and to Win Rhoades (proprietor of South Street and Vine) for his knowledgeable recommendations on wine and cheese.  We are indebted to Mark Sammons for his erudite synopsis of the history of Bastille Day.
I was lucky enough to be in Paris on Bastille Day in 1974.  I saw tanks and military troops parade down the Avenue des Champs-Elysées, hundreds of French flags flying everywhere, and huge numbers of proud citizens lining the famous avenue from the Place de La Concorde to the Arc de Triomphe de l’Étoile, all waiting to view the festivities that take place on the 14th  of July every year.  A little later, planes took to the sky, creating tri-color contrails above the jubilant crowds, and much later, fireworks lit up the Tour Eiffel.  Talk about pomp and circumstance!  C’était magnifique!

It was my first Quatorze Juillet. I knew relatively little about the celebration that marks the July 14th, 1789 storming of the Bastille, the event that symbolizes the beginning of the rebellion that gave birth to the modern French nation; but,  I could see that it is a very meaningful day for a patriotic nation of people who are deeply proud of being French.
Un Petit Cours sur La Fête Nationale 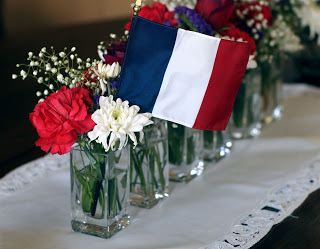 Bastille Day commemorates a hugely symbolic if somewhat minor incident in French history. Eighteenth-century France was the epicenter of the Enlightenment, its ideas and ideals were debated in aristocratic salons and common cafés alike.  Yet in political terms France remained impervious to Enlightenment ideas of reasoned social and political reform.
Even in the late 18th century, France still maintained a seigneurial system in which the king was synonymous with country, society stratified into ranks descending from church (First Estate), nobility (Second Estate), and all others (Third Estate, prosperous bourgeois, wage-earning laborers, and impoverished rural peasantry).  Special privileges served the first two estates, select corporations, provinces and towns. This system of estates and privileges distributed most wealth to the first and second estates. These two were effectively exempt from tax payment, shifting that burden to the general population. The economy was distorted in ways that exacerbated recurrent problems such as food shortages arising from drought and other natural conditions. Overall, the system left the third estate suffering from shortages and high prices while bearing a heavy tax burden.  The latter was aggravated by debt incurred by a recent shadow war against the English fought in the form of support of the American Revolution.

In 1789, yielding to popular pressure for tax reform, King Louis XVI convened for the first time in 175 years the Estates General, a convention of representatives of all three estates.  The Third Estate – the commoners – promptly declared itself the National Assembly, invited the other estates to participate if they wished. Ample support came from the outlying provinces. The King responded by militarizing Paris, and dissolving his privy council to restructure it. These moves were interpreted by the Third Estate as preparatory to a strike against its interests.

Their response was to demand weapons from the Bastille.  This was a medieval fortress that had been used as a state prison for the previous 150 years – not incidentally giving it a secretive and sinister reputation, though holding virtually no prisoners at the time. While the goal of the eight thousand rioters was securing powder, shot and more weapons to supplement the large quantities of weapons they had seized earlier in the day from L’Hôtel des Invalides on the Left Bank, the taking of the Bastille became symbolic of all that was intolerable in the current system. They negotiated surrender from the governor of the garrison of 120 invalides (semi-retired soldiers) then massacred them, seized the cache of weapons, and in a minor but symbolic gesture freed the seven prisoners held there.

The ensuing year saw immense change. The social estates were abolished. Monastic orders abolished, parochial clergy were made state employees, and church property confiscated to pay the national debt. Residual features of feudalism and seigniorial rights and privileges were abolished along with all titles. The old provinces were abolished, and replaced with new departments of equal size and population, under uniform administration.

In the coming months, the storming of the Bastille acquired considerable symbolic significance. In March of 1790, Lafayette presented the key to the Bastille to George Washington; it still hangs in the center hall of Mount Vernon. The first Bastille Day celebration, in the form of a multi-day Fête de la Fédération was observed starting on July 14, 1790, with the King and royal family participating, in a display of national unity under an anticipated constitutional monarchy. The latter never came to pass, and in the ensuing 170 years the French government lurched through a directorate, a consulate, two empires, two monarchies, three more revolutions, and five republics.

In 1878, a century after the storming of the Bastille, Bastille Day was revived, and two years later was consecrated as a permanent annual holiday. It symbolizes as an end of the Ancien Regime, and like La Marseillaise written a few years later, serves as a warning to tyrants, and a promise of a new and better life for all people.

Bastille Day 2011: Our Dinner Party
I have since celebrated Bastille Day many more times—although never with the circumstance that I saw that day in Paris when I was all of 19 years old. I have reveled in the pomp of the celebration in Provence in tiny village celebrations, in Boston at the Alliance Française street-side fête, in New York City at Lincoln Center where there is music and dancing, and in our own home.   One of my favorite celebrations was one summer when we had the pleasure of hosting two young French men; we asked our our Francophile friends to bring either a French or an American dish  We had everything from wedge salads to salade niçoise and apple pies to clafouti—it was a wonderful evening! 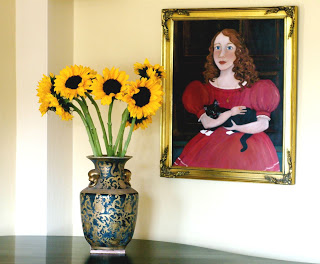 This year we have decided to have a small dinner party to mark the occasion.  Our menu was createdby David Scott Allen who is the publisher of Cocoa & Lavender and our cheese and wine selections were made by Win Rhoades who is the proprietor of South Street and Vine in Portsmouth, New Hampshire.
“What? No head of veal for Bastille Day? Our French teacher, Janine Kolb, inquired when I told her of our plans.
In contrast to the food I imagine was served at the first Bastille Day celebration back in 1790—heavy and garlicky—David created a very summery meal—light and cold—and has now posted all recipes on his blog, Cocoa & Lavender.  *
We–The Modern Trobadors–were tasked with selecting the cheeses for the second-to-the-last course, the requisite cheese course, and selecting the wines that would pair nicely with each of the courses.  For knowledgeable input on those subjects we consulted our neighborhood wine-and-cheese man, Win Rhoades who, with his partner, Claire Fleming, owns South Street and Vine in Portsmouth, New Hampshire.

As we all know, the French take their food very seriously.  The selection of a wine—or wines—to accompany their meal is approached with the same seriousness. In fact, even for the simplest café fare, they would shudder at the thought of selecting the wine without some knowledge of the meal.  For an haute-cuisine meal, that “marriage” of food and wine is elevated to a level that can generate anxiety–which is why we have sommeliers and knowledgeable proprietors of wine stores. 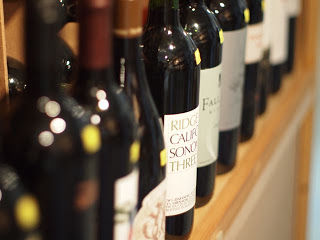 Win has been in the wine business for over fifteen years. His store is located on an inlet of the Piscataqua River in the historic South End of trendy Portsmouth, New Hampshire.  He enjoys a thriving business of loyal customers who live within what is generally known as the “Seacoast Area,” a cluster of communities along the coast of New Hampshire and into Maine.
Win is a wealth of information on both wine and cheese. We were fortunate to be able to consult with him about the wines that he thought would best accompany our meal.
Click on the video link to hear Win’s wine recommendations:
In France, the cheese course is an integral part of the menu.  It always follows the main course (or the salad course, if there is one) and precedes the dessert. In other countries, such as the United Kingdom and the United States, cheeses are more likely to be part of the hors d’œuvres course or are simply there to be nibbled on before the meal begins. Perhaps its late entrance into the French line up of courses is now dictated by custom, but I wonder if there is some practical basis to its position among the courses because there is now research that suggests that cheese contains enzymes that may help digest the meal. 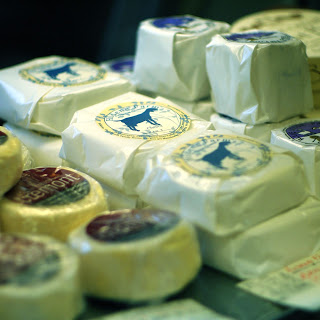 We asked Win to recommend cheeses and an accompanying wine.  Click on the video to find out which cheeses he recommended and why he suggested Champagne to accompany our cheese course!
With the wine and cheese selected and purchased, baguettes reserved, and groceries for the soup, terrine, salmon, and mousse in hand, we were ready to roll! 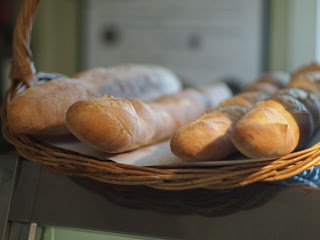 I asked one of our guests, Zoi Diamond, to make her haricots verts and she rose to the occasion with great aplomb, as you will see in the video below.

A cold dinner is a hostess’s dream dinner.  If I were highly organized (or not writing a blog), I could have prepared almost everything the night before.  As it was, I finished all the preparations by noon, leaving ample time to set the table, arrange the flowers, find the right music (e.g., a nice rendition of La Marseillaise and a little Edith Piaf), press the French linens for les toilettes, and practice my French.
Chez Manfull may be on the other side of the Atlantic, but we marked Le Quatorze Juillet with a little pomp and a lot of good food and fun.

We raised our glasses of rosé and saluted a country that’s been a friend to our own for well over two centuries, one that played a significant role in our own independence!

*  We veered from David’s menu only for our haricot verts because that dish happened to be one of the signature dishes of one of our guests, Zoi Diamond, and she graciously made them as well as provided the recipe.

Blanch haricots verts in large pot boiling butter about 1 and a half minutes.  Immediately drain and plunge into large bowl of ice and water to chill.  Pat dry on towels, and set aside.

Melt butter in large skillet.  Add shallots, stir for a minute, then add almonds and stir constantly over medium heat until almonds are almost brown.   Watch constantly or the almonds will burn.  Remove skillet from heat before they are brown, as they will continue to cook.  Set aside until just before it’s time to serve.

Place skillet back on medium high heat until butter melts or sizzles, then add beans and toss until coated and warm.  Add parsley, toss again, then serve.