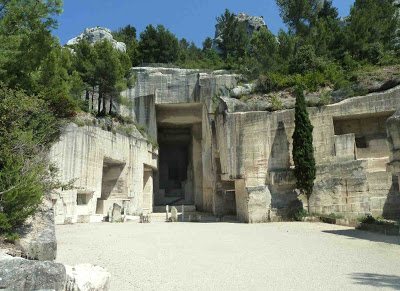 Entrance to Carrières de Lumières  © Culturespaces
The Carrières du Val d’Enfer–the quarries in the Valley of Hell–have provided limestone for over 2000 years. The Romans exploited the quarries for material to rebuild the nearby Celto-Liguirian town of Glanum back in 200 BC and later to create the Roman city of Arles. In the 11th century, the notorious Lords of les Baux built their formidable chateau out of limestone from these neighboring quarries. (Now referred to as the Chateau des Baux, it is a “must see” on our list of tourist destinations in Provence.) The quarries continued to provide limestone until they were closed in 1935.
Today, the quarries are providing something else: the largest permanent multimedia show in France. With 6000 square meters of surface and 14-meter high walls on which 70 video projectors shine their fantastic images, you can imagine that this would be a extraordinary show. Couple those huge colorful images with music amplified by a 3D audio system designed specifically for the unique surfaces of the quarries, and wow!

Then guess what the subject matter of show is–the art of Vincent van Gogh and Paul Gaugin! The focus is on the similarities and differences of their artwork, especially their use of color, across time and place.

Beginning with van Gogh’s early work in the Netherlands and Gaugin’s work in Pont Aven in Brittany, the images illustrate the roots of their inspirations, and how their work was liberated when they went to…

Paris and eventually to the South of France. Even their correspondence with one another and with others is projected up on the walls. The show concludes with the increasing contrasts in their approach to art when Gaugin went to the South Pacific and van Gogh stayed in France, most of that time in treatment for his mental illness.

The images are immense and captivating. The visitor is immediately enveloped by the brilliant colors, the details, the movement, and, of course, the music. The other dimension of this experience is that visitors walk through this experience and may do so at their own pace, taking their time to absorb the images as they would like. The show runs continuously. It is not just a multimedia presentation–it is a multi-sensory extravaganza.

The quarries have long been known for their multimedia shows. Called “The Cathedral of Images,” earlier audio-visual shows were also devoted to particular artists: Cezanne (2006), van Gogh (2008), and Picasso (2009) as well as other lesser known painters and photographers. The first time the quarries were used in any way other than their intended purpose was in 1959 when Jean Cocteau used them as a backdrop for his film, “Le Testament d’Orphée.” (Segments of this film are shown in the current show.)

Although, perhaps, the beauty of the quarries was recognized much earlier as evidenced by the many sculptures and frescoes created by the quarry workers.

In 2008, the owners of the Carrières du Val d’Enfer sought new management for the quarries. Culturespaces, the company that was already managing the Chateau des Baux, was awarded the contract. They renamed the site from the Cathedral of Images to Carrières de Lumières and reopened in March 2012 to much popular and critical acclaim.

The primary artist in charge of the project is Gianfranco Iannuzzi, a sociologist and photographer, who has long worked at this location and is currently overseeing several other significant projects in Europe and beyond.

When asked why people should come to see this show, Monsieur Iannuzzi reportedly replied, “it will be like dreaming with your eyes open.” What a great description of this unique show!

Carrières de Lumières is about 45 minutes from Lourmarin, the village where we hang our hats.  Check out our website www.RentOurHomeInProvence.com for vacation homes to rent in this charming town.

When you go, do bundle up! As the title suggests, the quarries are a cool place to visit…in more ways than one. 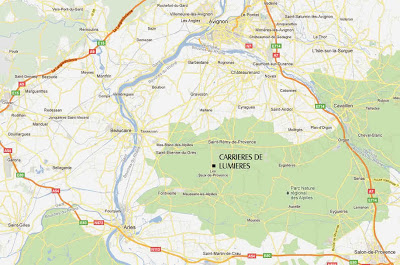