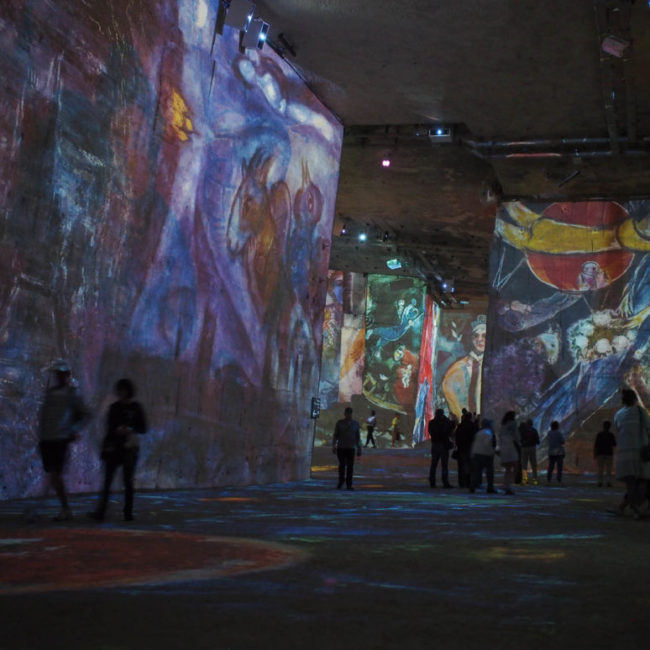 The Carrières de Lumières defy description.  One could say (aptly) that it is a multi-media extravaganza—about 100 projectors casting 3,000 images on walls as high as 14 meters, spilling onto the ceiling and the floor, and choreographed perfectly with music ringing out from about 25 speakers strategically placed within the 5,000 square meters of a former limestone quarry certainly qualifies as fantastic spectacle.

However, until you step through the door into the cavernous quarries where limestone was quarried from Gallo-Roman times to the early 20th century, you just won’t understand.  Until your eyes adjust and you stroll around, sit, dance, or stand and marvel, you just won’t get it. 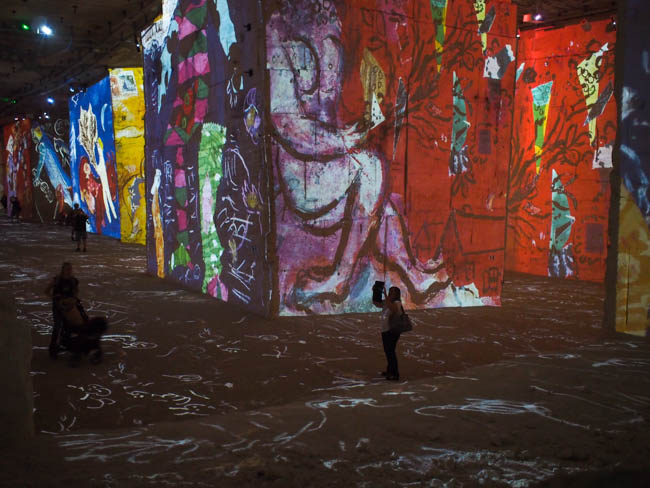 I’ve just seen the current show, Chagall: Songes d’Une Nuit d’Été, twice in the course of a week—the visits were on the itinerary of our recent Provence tours—and I can’t wait to go again with my daughter in August. 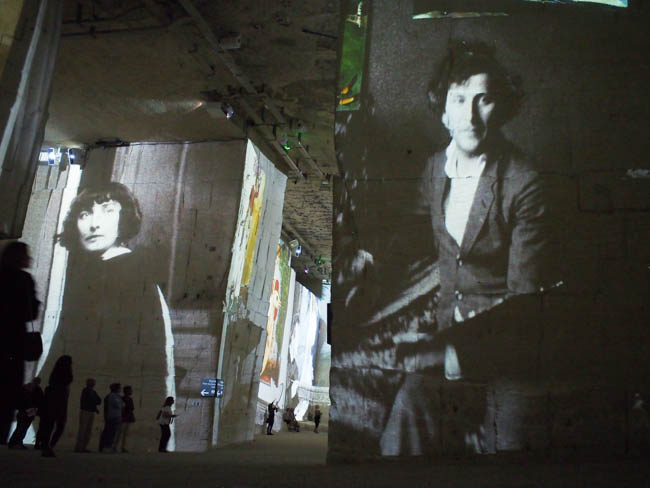 Marc Chagall (1887 – 1985) was a Russian-French artist, born in Belarus—the first of nine children in a Lithuanian Jewish family—and died in Saint Paul de Vence. He became a French citizen in 1937. His work is distinctly modern although, as the show will reveal, over the course of his long life, it reflected several styles of art and, from canvas to stained glass, he worked in just about every medium possible. He also worked on several large projects, including stained glass windows for the famous cathedrals of Reims and Metz, the United Nations, and the Hadassah Ein-Kerem Hospital in Israel, for example, and he painted a large part of the ceiling in Paris Opéra house.

These quarries, located in Les Baux-de-Provence, were once renowned for their abundant supply of limestone. Over 2000 years ago, the Romans made use of this limestone for rebuilding the Celto-Liguirian town of Glanum and for building the Municipal Arch and Mausoleum that still stand across from Glanum. The Roman city of Arles was built with limestone from these quarries.  Over a thousand years later, in the 11th century, the infamous Lords of Les Baux built their formidable citadel from the limestone in these adjacent quarries and, three hundred years after that, in the 14th century, the ramparts of Aigues-Mortes rose up from the ground with limestone from Les Baux (and Beaucaire). These quarries—quite famous when supplying limestone–came to be known as “Les Carrières du Val d’Enfer” or “the Quarries in the Valley of Hell” and were a significant source of limestone until 1935, when they were closed. 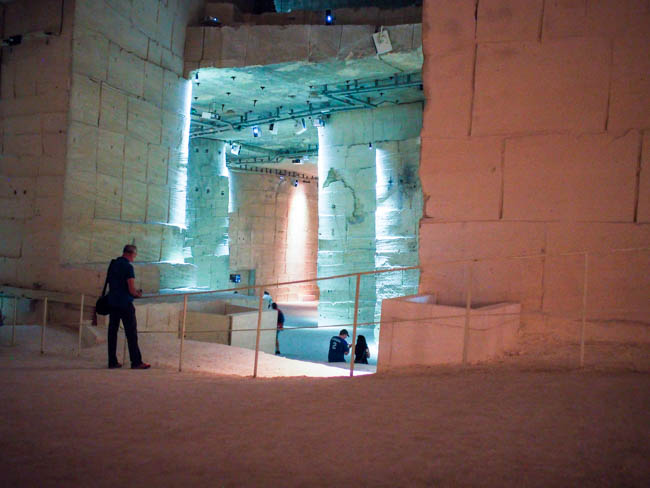 Today, these same quarries are famous again: the remarkably popular multimedia art shows that take place are a feast for the senses. The quarries were used for purposes other than extracting limestone as early as 1959—as a backdrop in Jean Cocteau’s film, Le Testament d’Orphée and, beginning in 1977, as a venue for music extravaganzas—such shows were not regularly scheduled until 2006.

Originally called “The Cathedral of Images” and organized by a different company than the current one, the subject of the first multimedia art show was Provence’s native son Cezanne (2006), followed by van Gogh (2008); and Picasso (2009).  In 2012, under the management of Culturalspaces and the leadership of Gianfranco Iannuzzi and team, the shows began again to extraordinary acclaim.  First came van Gogh and Gauguin (2012), followed by Monet, Renoir, and Chagall (2013); Gustav Klimt (2014); and Leonardo da Vinci, Michelangelo, Raphael (2015). 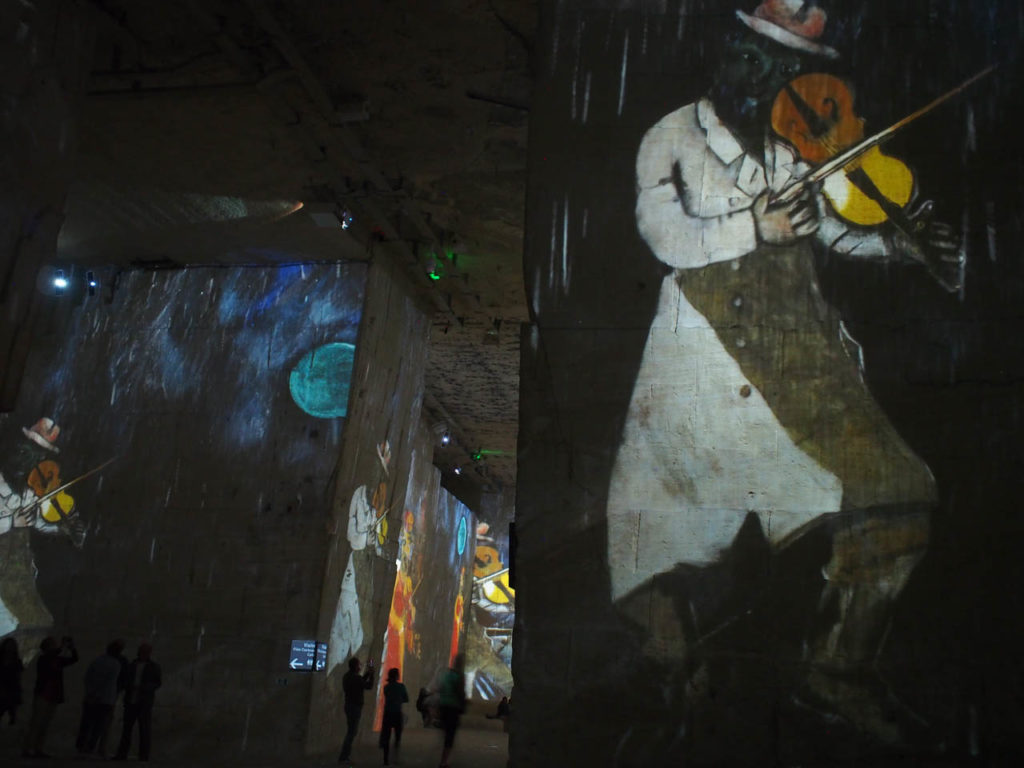 Try to imagine the huge digitized images of some of the most famous masterpieces in the world projected onto the walls accompanied by music specially chosen to harmonize with the images. It may seem peculiar at first blush, but it works brilliantly!

I am not alone in singing the praises of the Carrières de Lumières, as a quick google search will reveal.  Since Culturalspaces took charge four years ago, over 1.6 million people have attended these shows.  In 2015, some 507,000 attended. 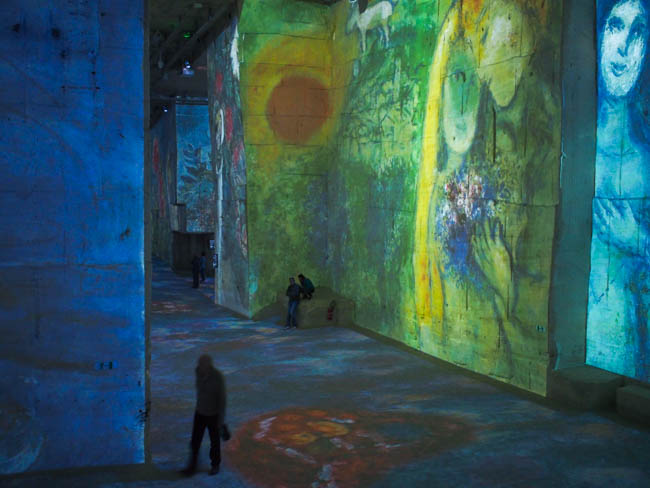 The current show, entitled, in English, Chagall: Midsummer Night’s Dream, is an “excursion” through 11 aspects of Chagall’s art, corresponding (roughly) to 11 periods in the painter’s life.  Bright times are masterly woven in with dark times, including, of course, World War II when the horrific events of that period propelled Chagall and wife Bella to Gordes, a hilltop village in the Luberon, just 52 kilometers (30 miles) from Les Baux. 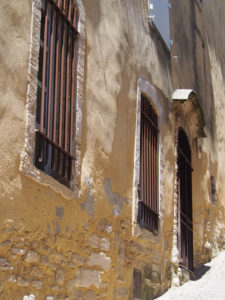 The Chagalls lived in Gordes (1940- 1941) in this apartment in the center of the village. Photo by W.T. Manfull

In June 1940, when Paris fell to the Nazis, the Chagalls left their home in Paris and eventually made their way to Gordes where they lived for about a year.  In February 1941, they were (finally) granted a visa to enter the United States but it would take until May 1941 before they could actually escape by crossing Spain into Lisbon.  His crates of artwork barely escaped confiscation and would not arrive in the U.S. until later, with daughter Ida and son-in-law who undoubtedly endangered their own lives getting them out of Spain and across the Atlantic. Bella died in 1944, leaving Chagall heartbroken and unable to work for several months. Chagall returned to France—to Vence, located just north of Nice—in 1948. He married Valentina Brodsky, whom he called “Vava,” in 1952.  Chagall’s amazing career is far too fruitful to cover here but much of the work he produced after WWII is seen in the show at the Carrières de Lumières

Look for early paintings of wooden houses, farmyards, and churches from his native Russia, his beloved Bella, his well-known bouquets of flowers, scenes depicting the horrors of war, scenes of music, dance, and the circus, scenes inspired by mythology and others by Yiddish folk tales, as well as images of his stained glass and mosaic work. Most of Chagall’s major pieces were digitalized for the show 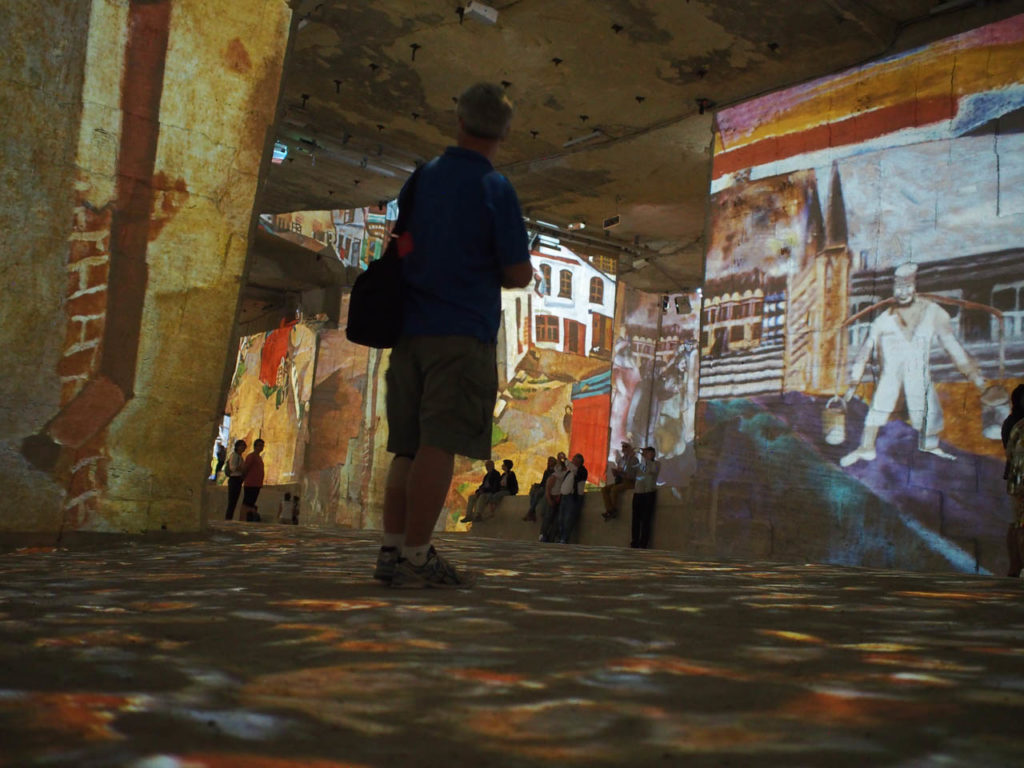 The images are stunning alone but when married to the selections of both classical and contemporary music, the result is breathtaking. Listen for the music of Tchaikovsky, Ravel, Mahler, for example, as well as Louis Armstrong, Ella Fitzgerald, Janis Joplin, and Chick Corea, to mention just a few modern performers. Pianist Mikhail Rudy, who was a close friend of Chagall, is said to have been instrumental in choosing the pieces. 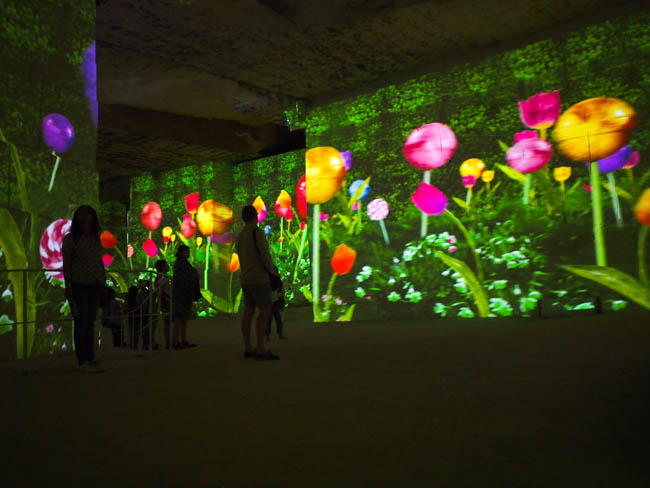 There is also a short and exquisite multimedia show about Lewis Caroll’s Alice in Wonderland. With a focus on “the form of consciousness we call imagination,” the show is “a fantasy in which viewers can explore the world with the curiosity and imagination of the child that lies within us all.”  Look for white rabbits, tea settings, and, of course, the Cheshire cat, all accompanied by perfectly paired music. 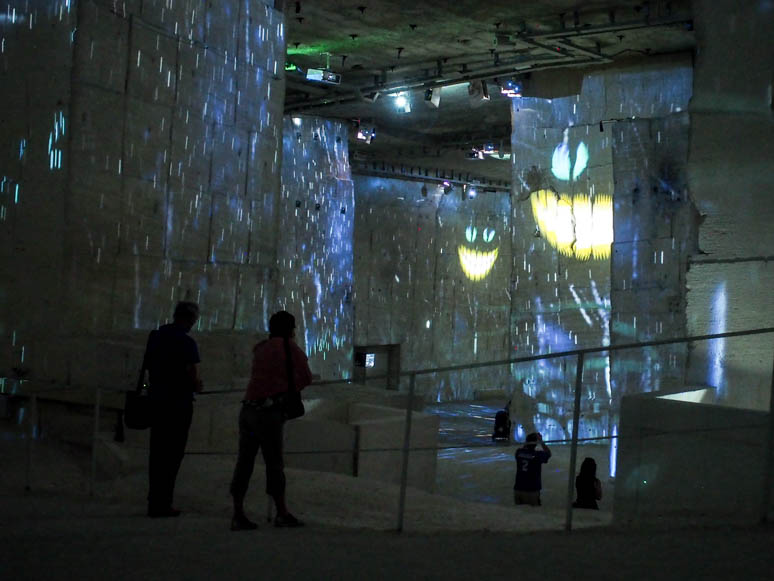 According to an interview with Gianfranco Iannuzzi, in the very informative book about the show (available for purchase in the gift shop), the show promises:

A sensory immersion in colors and shapes, themes and techniques, a deceptively dreamlike life and vision.  An excursion illuminated with light and hope, love and art.

They certainly kept their promise.

Next year, the work of artists Hieronymus Bosch, Pieter Bruegel, and Giuseppe Arcimboldo will be the focus. Wow! Any guesses what the music will be?

The show usually lasts about 35 minutes and visitors may enter at any time (or wait until the beginning of the show).  Make sure to pack a sweater!

To read more about the rescue of Marc and Bella Chagall, I recommend the brief and illuminating paper entitled The Rescue of Marc Chagall published by The David S. Wyman Institute for Holocaust Studies.