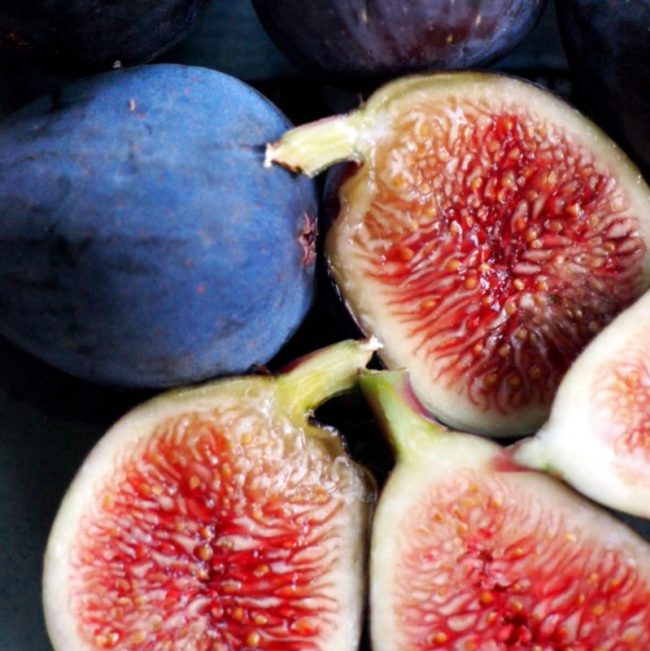 The luscious fig—its sweet flesh accented by crunchy seeds and enveloped by a deep purple skin—will soon reach perfection in Provence, arousing passions that border on obsession in folks who live in this part of the world. A cause for sleuthing, celebration, and, in Solliès-Pont, a lingerie fashion show that’s part of a three-day festival devoted to a particular variety of fig. 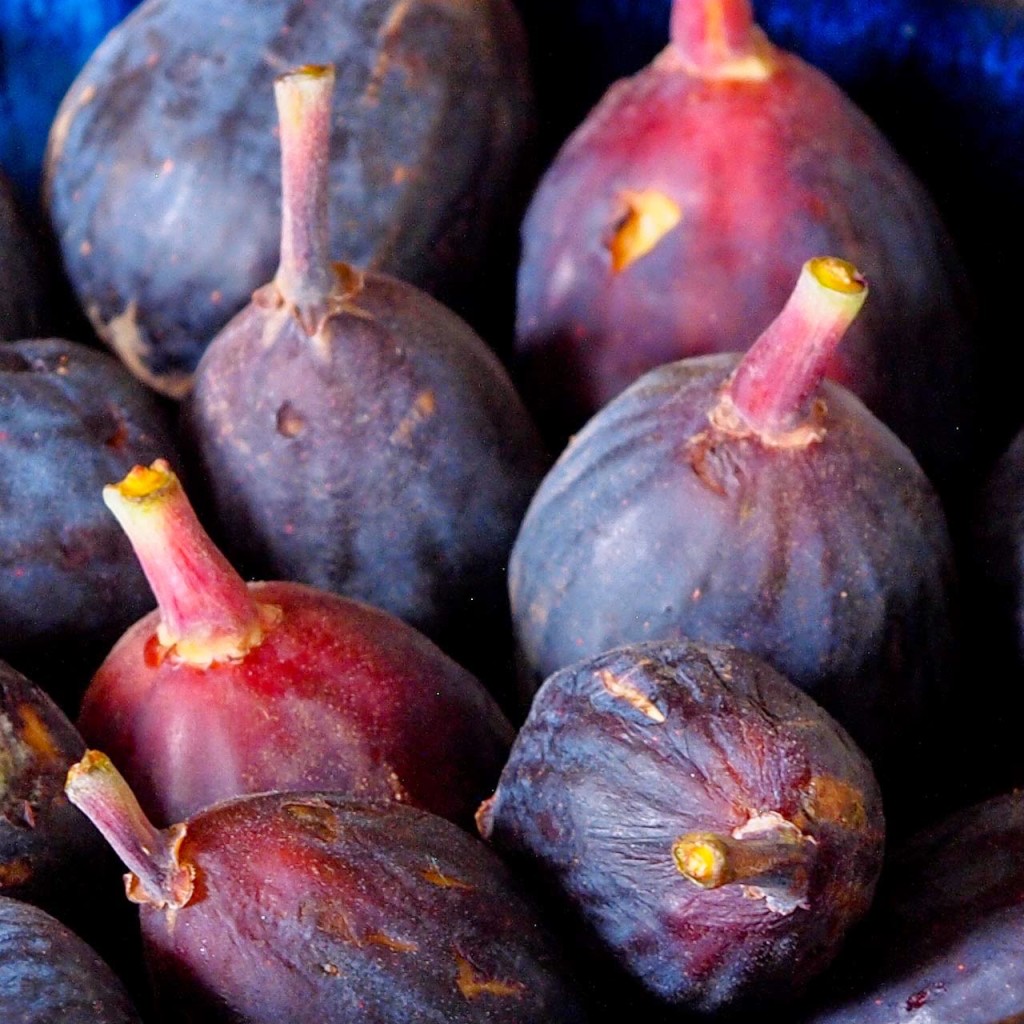 I am a lover of figs—plain; wrapped in jambon de Parme; topped with chêvre or with Fourme d’Ambert cheese and a dollop of honey; arranged in tarts; transformed into jams and chutneys; or sautéed in butter and brown sugar and slathered atop vanilla ice cream—so I understand the excitement and even feel some pressure myself to eat them in their various delectable forms—morning, noon, and night—during the short season they are available. 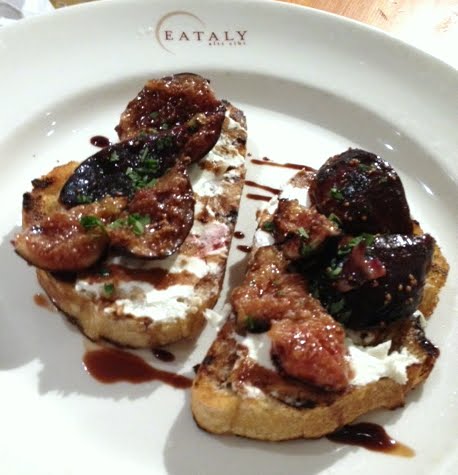 Bruschetta of chêvre and figs topped with aged balsamic vinegar

Already this season, I’ve eaten lots of naked figs, made two fig tarts, served lots of figgy hors d’oeuvres, and, over the weekend in Le Verdure in New York’s Eataly, enjoyed a bruschetta of chêvre and figs topped with aged balsamic vinegar. 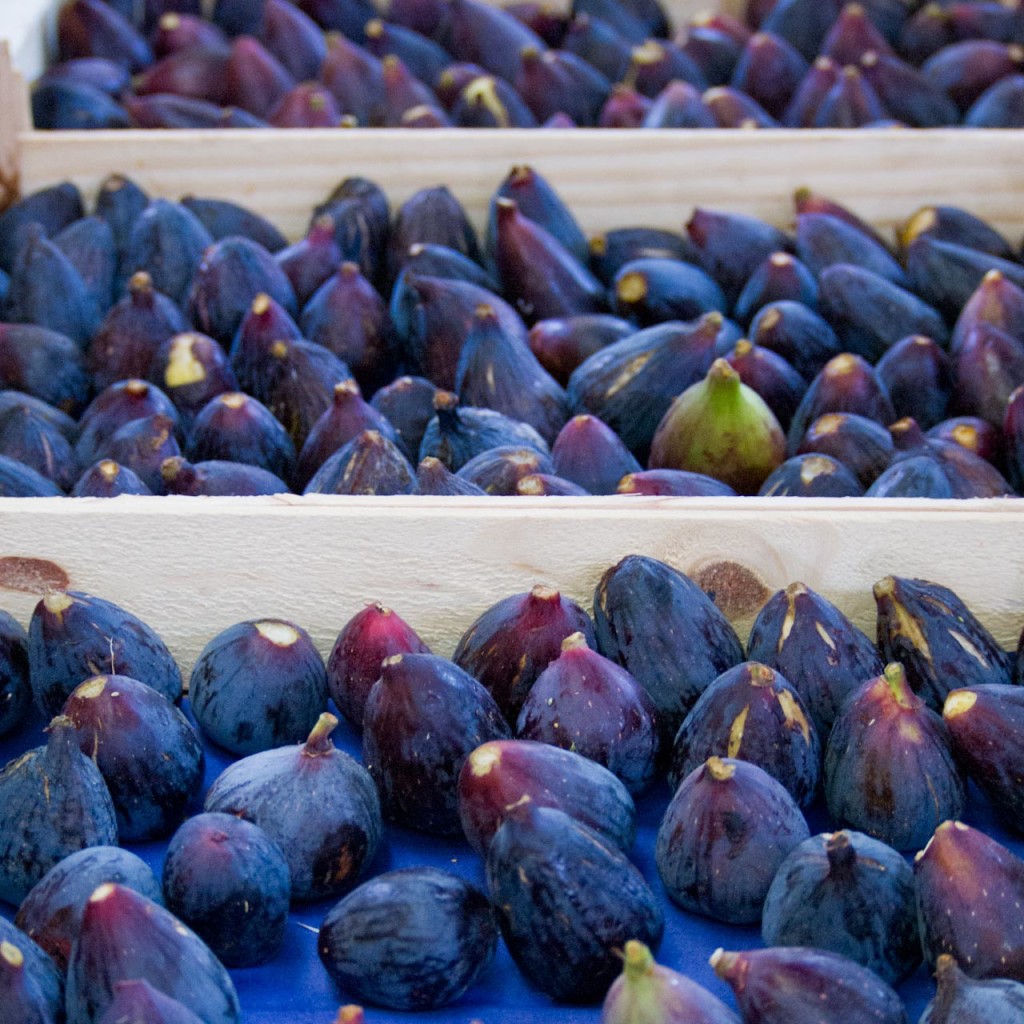 Figs for sale at the market in Cucuron

Figs are fragile and highly perishable, making them difficult to ship or even to stock in grocery stores. I often find myself scouring the markets in Provence and pleading with market vendors to set aside a dozen for me for the next week when their truck rolls into the village. Thus, it may not be hard to imagine my husband and me bumping along a narrow unpaved road, directions in hand, just outside the picturesque village of Lourmarin with the sole purpose of finding a tree said to be laden with ripe figs.

It all began one morning in early September when I was commiserating with a fellow fig lover over a bowl of figs, some of which had begun to weep and attract a small cloud of fruit flies. 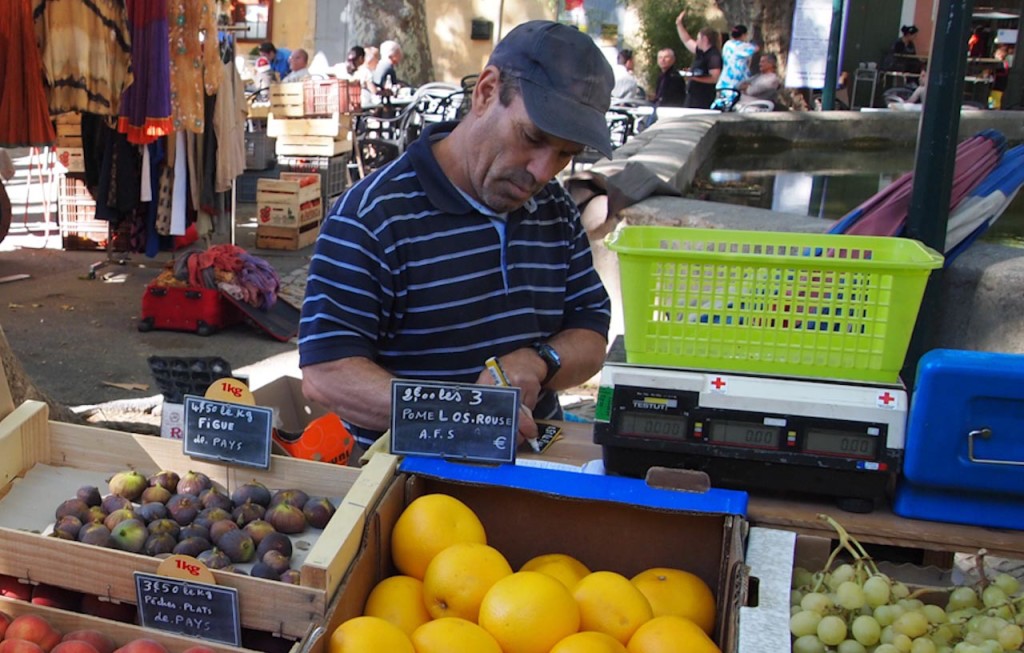 Figs for sale at the Cucuron market

In France, the majority of the country’s figs are grown in Provence—as much as 75% are harvested in the department of the Var. In the neighboring Vaucluse department, where Lourmarin lies, there are not nearly as many fig trees. 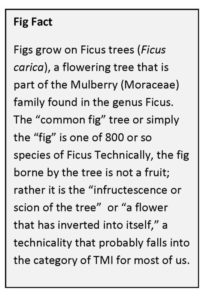 “I know where there is a fig tree. It’s on public property, so any one can pick the figs but only a few people know about it,” my friend said. I had visions of a secret fig-lovers society.

“Shall I tell you where it is?”

Thoughts of an induction ceremony went through my mind as the words came out of my mouth: “Oui, bien sur!” “Yes, of course.”

A few hours later—no induction was necessary to get the directions—our car was rattling and rolling in a cloud of dust on the last stretch of a long dirt road said to lead to the fig tree. (I remember thinking about whether our auto insurance covered off-the-road excursions.)

We spotted the lone tree, limbs weighted down by its many figs and, as we pulled up to the tree, we could see that the ground was covered with plump, juicy figs, too. No one had been picking figs from this tree in many days. A quick assessment revealed that fig picking was not for those wearing white linen and Tory Burch sandals, as I was, so my husband grabbed the basket and proceeded to fill it.

The large tree’s canopy of limbs spread wide and low, requiring my husband to pull apart the branches and duck as he went in toward the center to pick the most succulent fruits that this generous tree had to offer. Feeling just a little nervous that someone else might pull up and trying to be fair in taking only what we needed for a small fig tart, we weren’t there long. The sap of the tree was starting to stick to my husband’s hands and the bees were getting too close for comfort, too. We would be back we thought.

As we drove away, mission accomplished and anxiety turning to excitement about the dessert we would bake that evening, my husband starting squirming. In a matter of minutes, his arms were covered in bright pink patches of bumps that were unbearably itchy and incredibly painful. He was frantic, writhing in pain, saying his arms felt like they were on fire, a sensation that was rapidly spreading to his torso and legs. We were both scared and drove directly to our omniscient pharmacist in Lourmarin. (Regular TMT readers may recall an earlier post on the Pharmacie de Lourmarin.)

It turns out that fig trees (and even the fig itself) can cause allergic reactions in hypersensitive people. The leaves and the sap, especially, contain substances called psoralen and bergapten, which can cause “phototoxic dermatitis.” In sunny Provence, this reaction may be particularly likely!

Much to my husband’s chagrin, the pharmacist smiled as he told her what happened: she was familiar with fig allergies and recognized a certain irony in the situation. Fortunately, his rash was easily treated with a topical ointment called “Apaisyl” and we were on our way but not before the pharmacist implored us to tell her where the fig tree was. Ah, the things we’ll do for figs… 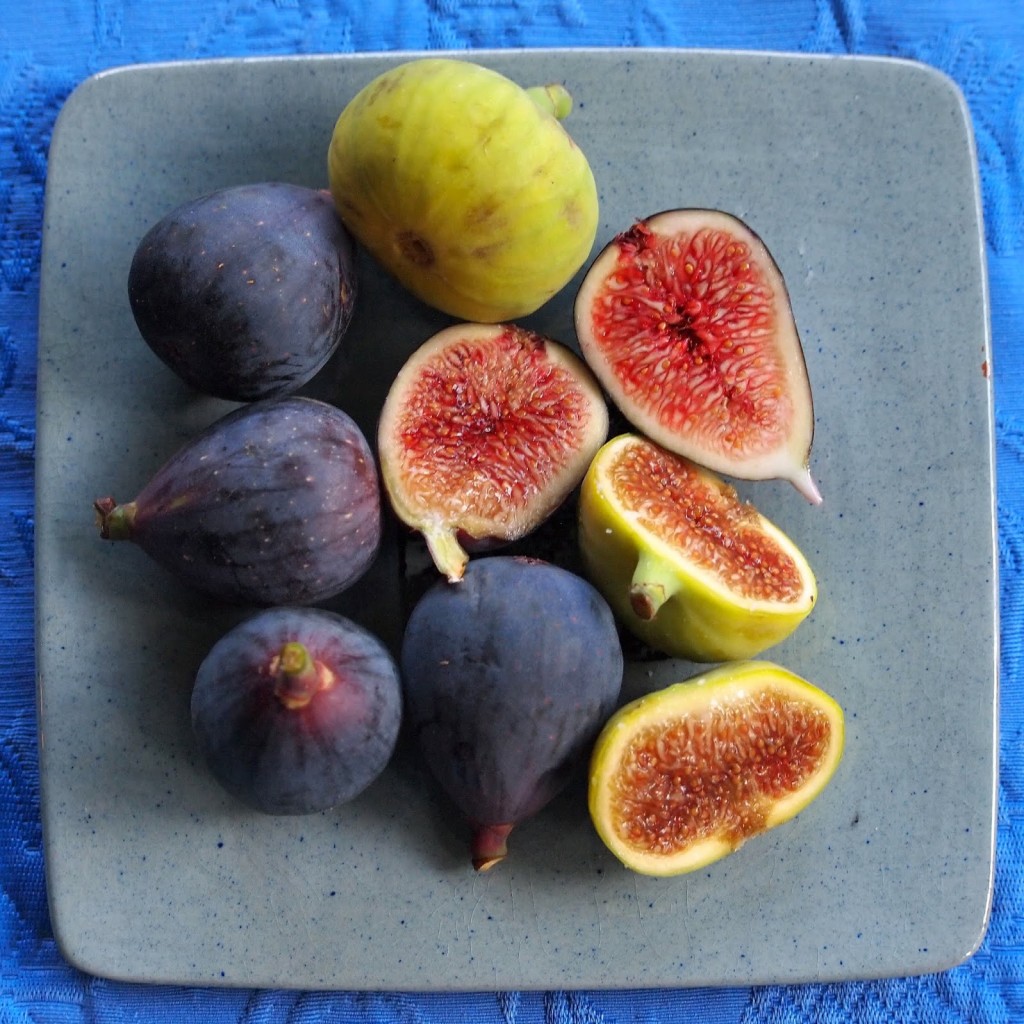 If sleuthing for figs isn’t your cup of tea, I suggest you head over Solliès-Pont, in the Var, just 12 km (7.5 miles) northeast of Toulon, for the 17th Annual Fête de la Figue. This small city, called the capital of the Solliès fig, will be hopping from the evening of Friday, August 23rd through Sunday the 25th.

The celebration kicks off with a “grand repas et son ‘menu tout à la figue.’” The meal opens with a serving of pan-fried foie gras with figs, followed by a confit of beef and figs with polenta, and a cheese course of fresh chêvre with fig jam. The dessert, called “Invitation au Voyage,” suggests perhaps a medley of desserts—I don’t know but we can be certain that figs will dominate the preparation! Red and rosé wines from the Var’s Vignoble Kennel (AOC Côtes de Provence) will accompany the meal. There will be live music, too. At €31 per person, this is a bargain! 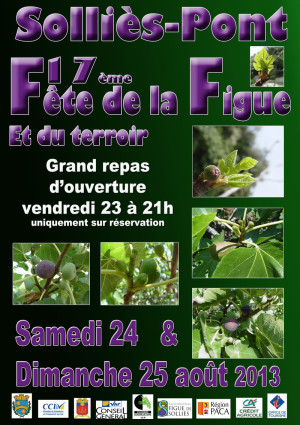 On Friday, we spoke with Phillipe Bellon, one of the organizers of the festival, who said that 900 tickets for the “grand repas” had already been sold, leaving just 100 tickets. They sold out last year and expect to do the same this year.

On Saturday, the festivities begin with a parade at 10:30 a.m. You can wander the streets where around 180 vendors will display their products; enjoy an aperitif at 12:30 in the village square; watch a boules competition; listen to music; or hike through the fig trees on the outskirts of the village. Dinner, “A Gypsy Fiesta” will be organized by the local Rotary Club at the Parc du Château (tickets are €35, with proceeds going to charity). 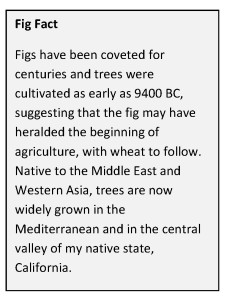 Two additional Saturday events that piqued my curiosity are a lingerie fashion show and an “Election de Bébé Figue 2013.” I couldn’t imagine what lingerie had to do with figs until I read that the show will feature “lingerie and other clothes the color of figs” which left me pondering what the criteria would be for the baby election!

On Sunday, the market continues as a backdrop to a 10K hike and the “messe et bénédiction de confréries,” during which, I think, the figs will be blessed by the Brotherhood of the Friends of the Figs of Solliès.

The Solliès fig, also known as the “Violette de Solliès,” is clearly revered by folks in this area. Indeed it is special: it is the only fig that has been awarded appellation d’origine contrôlée (AOC) status (in 2006), meaning that the French government guarantees the origin or “terroir” and quality of these particular figs.

The terroir is very important, Mr. Bellon explained. When he described what environment figs grow best in, he said, roughly translated, something like “figs want their head in the sun and feet in the water.” These conditions certainly prevail in this area of the Var. 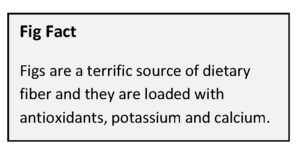 Mr. Bellon also said that Solliès figs are unique in that their skin is tough enough to be readily shipped. In fact, they are often still referred to as the “Parisienne” because they were so frequently (and successfully) shipped to the nation’s capital.

Peak fig season in Provence, Mr. Bellon said, is running a little late this year. “It usually peaks in mid-August,” he said, “but this year, it is about fifteen days late.” The season typically wraps up in October. There’s still time to book a flight. 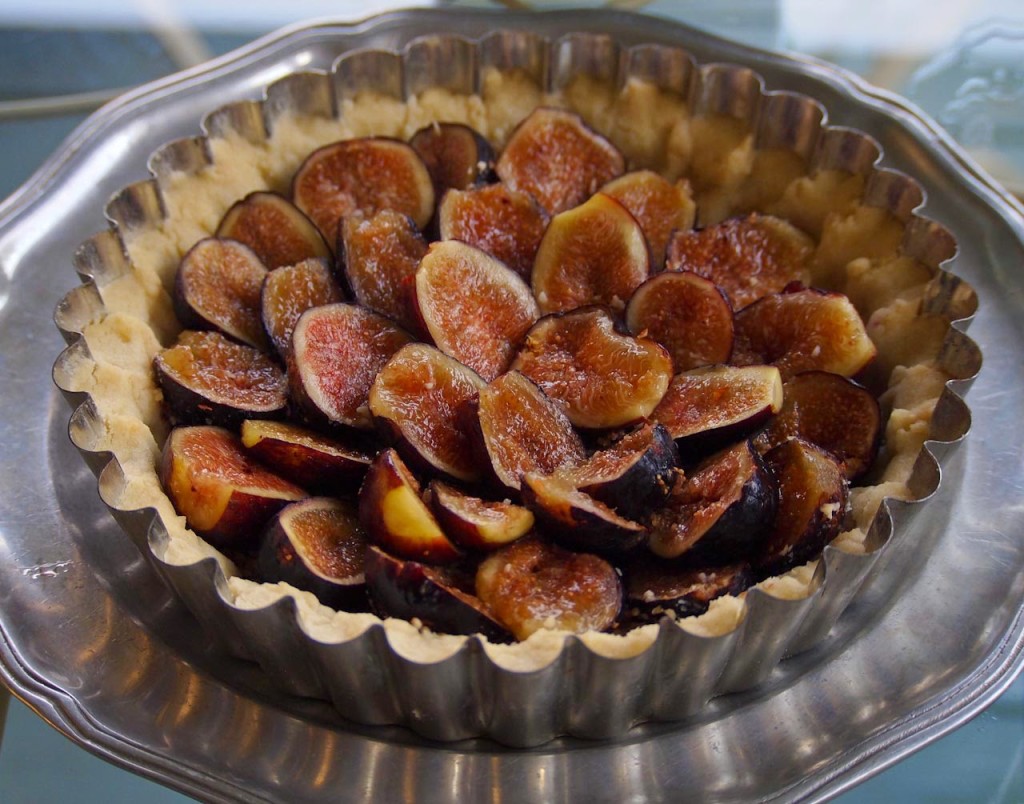 For me, for now, I will have to be content with another fig tart made of, alas, Black Mission figs from California. I leave you with a link to the recipe for my favorite tart, from Patricia Well’s At Home In Provence, one I have made so many times that the pages have fallen from their binding. (The link here is from a New York Times article about another person obsessed with figs.) Enjoy. 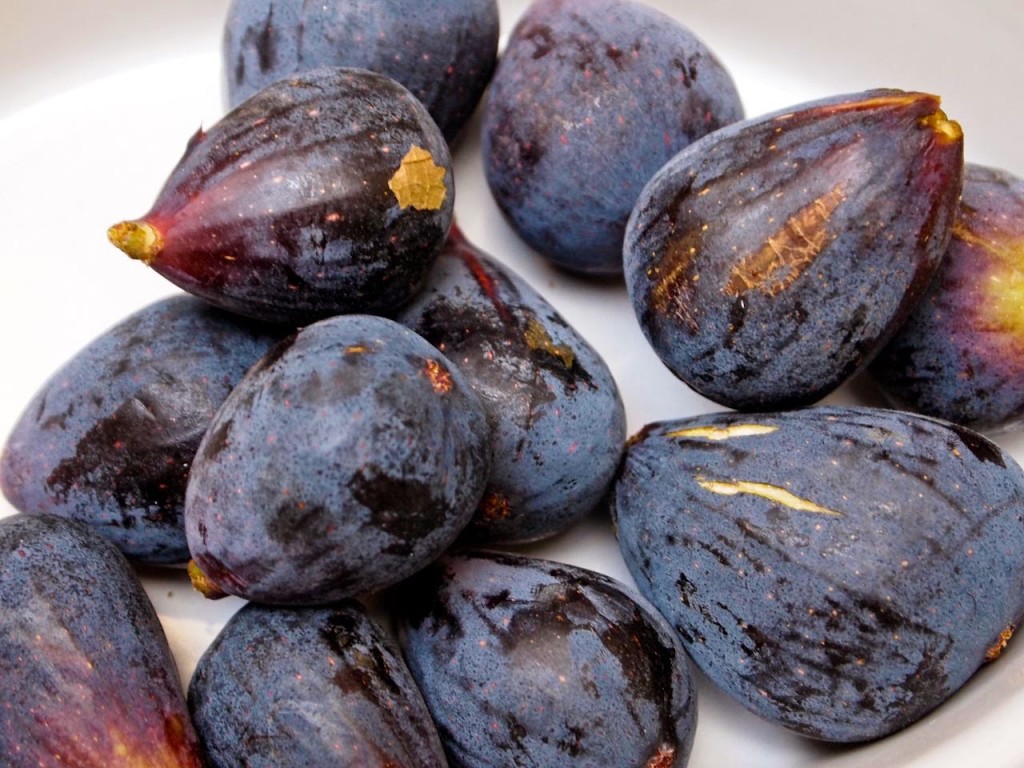 The bounty of our fig picking adventure in Lourmarin