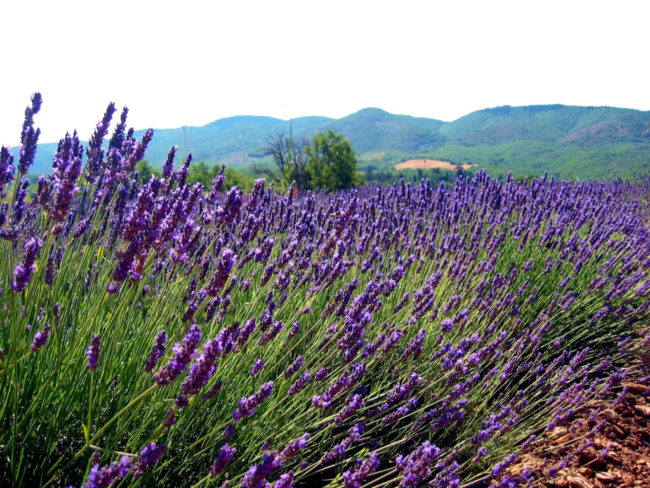 At the height of lavender season in Provence—the largest lavender- producing region in the world—the industry is worried. The iconic flower is in trouble and the culprit is the cicadelle, a tiny insect with a voracious appetite. Production has plummeted in the last decade, dropping to as little as one third of what it was in 2000.

Although lavender grows wild in many areas of the world and is cultivated in many countries (notably England, Spain, Bulgaria and the three west coast states of the United States), French lavender is considered to be the finest. Provence sets the standard—its lavandula angustifolia (synonym, Lavandula officinalis and also called English Lavender or “true” lavender) is renowned for its delicate sweet fragrance. 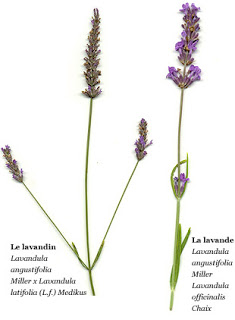 A little bit of botany before we proceed further. (Go get a café crème for this part!) Lavender is part of the Mint family with siblings as familiar as sage, thyme, rosemary, savory, and oregano. The lavender genus Lavandula consists of more than twenty species. The three main species within the genus Lavandula that are used to produce essential oils are “true” lavender (L. angustifolia); lavandin (a hybrid of L.angustifolia and L.latifolia); and spike lavender (L. latifolia, synonym L.spica). Lavandin is hardier than “true” lavender, produces more oil, and is cheaper; however, its fragrance is inferior, lacking lavender’s subtle sweetness and slight woody undertones and suffering from unpleasing undertones of camphor.Where does the word lavender come from? Probably from the Latin verb, “lavare,” which means “to wash” or possibly from the Latin word, “livendulo,” which means “livid or bluish.”

“La lavande est en péril,” read a large purple headline in the popular regional newspaper La Provence. Just as the season was about to commence two months ago, the newspaper devoted a full page to his calamitous issue (affecting both lavender and lavandin). Lavender is both a fundamental part of the identity of Provence and an integral part of the local economy.
Lavender and Provence. Like lobsters and Maine, maple syrup and Vermont, soft-shell crabs and Baltimore, pasta and Italy, few products and places are more firmly ingrained in our minds than lavender and Provence. In the summer in Provence, it is everywhere. Fields of purple splendor are never far, no matter where you are in this region. 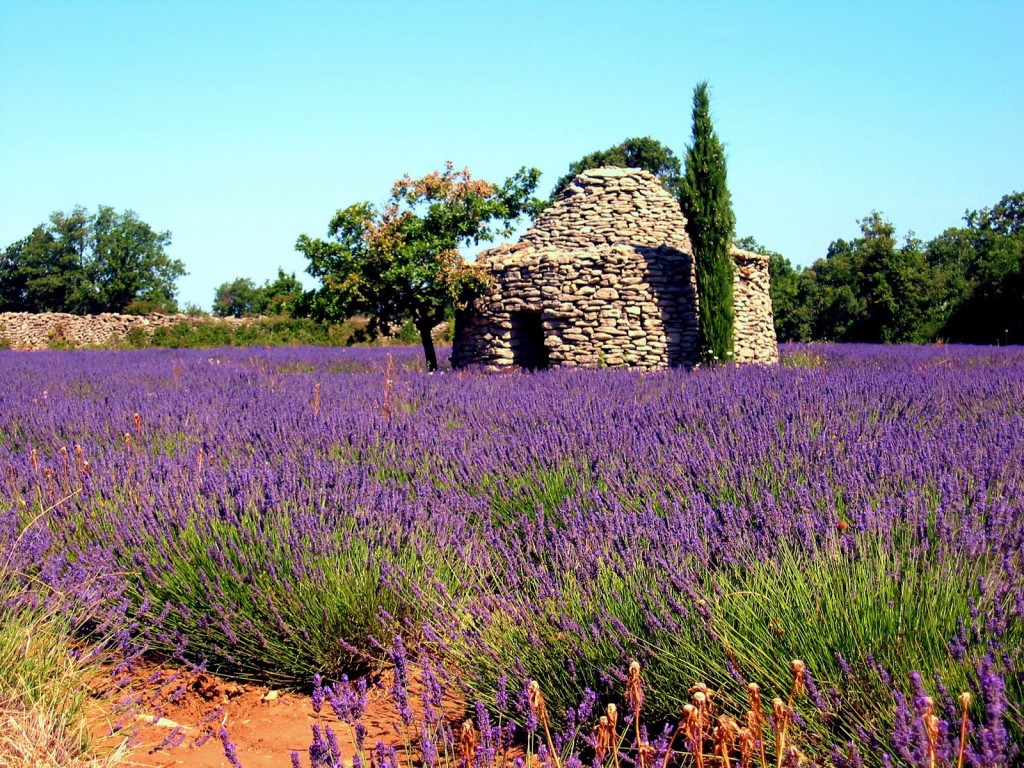 Field of Lavender in the Luberon on the way to Manosque

The perfectly aligned rows of lavender, looking more like solid swaths of purple, often dotted with bories or cabanons, are a magnet for tourists toting cameras and easels. The scent of lavender fills the air in local markets where essential oils, bunches of lavender, sachets of lavender, lotions and soaps of lavender, honey from bees who dined on lavender, and table cloths ablaze with lavender prints dominate many vendor tables.
The distilleries run over time and annual lavender festivals are popular destinations. Few products are so tied to a region’s sense of identity.
The economic importance of “blue gold” is also widely recognized. The French government confirmed this important role in the region by giving the essential oil of fine lavender from Haute-Provence appellation d’origine contrôlée (AOC) status in 1981, a status reinforced by the European Union (EU) stamp of authenticity, appellation d’origine protégée (AOP or, in English, PDO for Protected Designation of Origin). These systems, seemingly complicated by the various acronyms that reflect separate authorities and different languages, act in conjunction to protect the integrity of specific products for the benefit of their producers and consumers and to enable the enforcement of laws prohibiting counterfeit production and sale.
For example, the current price for AOC/AOP Haute Provence essential lavender oil is 120-130 euros per kilo. When compared to 90 euros for non-AOC/AOP lavender oil and 14.50 – 17 euros for lavandin, the temptation to counterfeit the real thing would be tempting for some unsavory sorts. 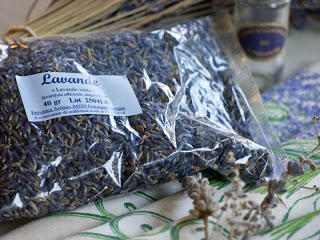 In sum, the French government, in conjunction with the EU, guarantees a product’s quality, the specifications of its production, and its origin (like it does for AOC/AOP wines, cheeses, butters, chickens, and so on). The AOC /AOP label certifies that the lavender oil is from fine lavender (lavandula angustifolia) that comes from a specific geographic area ( four towns in the Alpes-de-Haute-Provence; Hautes-Alpes; Drôme; and Vaucluse departments of France, collectively referred to as Haute-Provence) where it must be grown at an altitude of at least 800 meters (2625 feet) and then produced in a certain manner.

In 2010, 7 metric tonnes (almost 8 U.S. tons) of essential oil of Haute-Provence (AOC/AOP ) lavender was produced, more than half of which was purchased by L’Occitane en Provence, the fragrance and skin-care product company headquartered in Manosque. This company, founded by Frenchman Olivier Baussan after a serendipitous discovery in the middle of a lavender field, refers to lavender as “the fragrant soul of the region.”
It takes about 150 pounds of lavender flowers to make one pound of essential oil. L’Occitane uses a lot of Haute-Provence essential lavender oil and is therefore dependent on lavender fields forever; but, equally as important, the company also espouses a philosophy that promotes the preservation of knowledge and traditions revolving around nature in Provence. L’Occitane, now an international success, clearly has a vested interest in the health of the lavender industry and has contributed generously to research searching for a pesticide-free solution to the cicadelle’s destruction.
The cicadelle (known, in English, as the leafhopper) is closely related to another icon of Provence, the noisy but (largely) benign cigale (known, in English, as the cicada). It is tiny (barely a millimeter long) compared to the friendly cigale (about 20 to 50 millimeters in length, about 1-2 inches). It was first noticed in Provence in 1994 when it began its destructive feast of the sap in lavender stems, leaving behind deadly microbacteria (phytoplasma Stolbur) that dry up the plant. Its larvae devastate the roots of the lavender plant. Since that time, lavender production as plummeted in Provence.

Lavender has also had to battle drought due to climatic changes, prompting researchers to predict that lavender cultivation may move further north, away from Provence.

In the meantime, researchers with the Inter-Regional Center Régional Interprofessionnel d’expérimentation des Plantes Aromatic à Parfum, Aromatiques et Médicinales (CRIEPPAM), along with L’Occitane who contributed 55,000 euros in May to launch the research endeavor, are investigating more resistant types of lavender and organic methods of protecting lavender from the cicadelle. Some success may have been found by covering the plants with Kaolinite, a white powder made of clay minerals, but the results are inconclusive. It seems to offer some hope in the protection of healthy lavender (and lavandin) but its effects on bees needs further investigation.

None of this depressing news has seemed to put a damper on the annual enthusiasm for lavender in people outside the industry. I’m told that with few exceptions the fields of la petite fleur bleue de Provence are just as inviting as ever. The notable exception is the Abbaye de Sénanque where rumor has it that wheat has replaced the rows of lavender than famously graced the grounds of the entrance to the Abbey—I can confirm the lavender was removed but I am getting conflicting reports about what the future holds for the field.

Other fields of lavender are just a half-hour from Lourmarin, where we hang our hats (and provide rental properties for vacationers) and festivals celebrating its harvest are nearby as well.

Lourmarin is in the Vaucluse Department of Provence, which is where the largest amount of “true” lavender is grown. Vaucluse represents 13% of the cultivated area in France and produces 37% of France’s essential oil of fine lavender. The Lavender Museum—Le Musée de la Lavande—is just a half-hour’s drive, an excursion that can easily include lavender fields.
The three largest Lavender festivals are an easy day excursion. The villages of Digne-les-Bains and Valréas both hold their festivals on the first weekend in August. Sault, a charming village about an hour from Lourmarin, holds their festival on August 15th every year.

Simply tooling around the Luberon is a wonderful way to see the lavender, maybe taste some wine, perhaps enjoy a leisurely lunch, and have a peaceful afternoon.

Lavender has grown wild in Provence forever. As we gaze at today’s gorgeous fields of lavender, stretching out as far as the eye can see, we get the feeling that they do go on forever. But, not if the cicadelle gets its way.