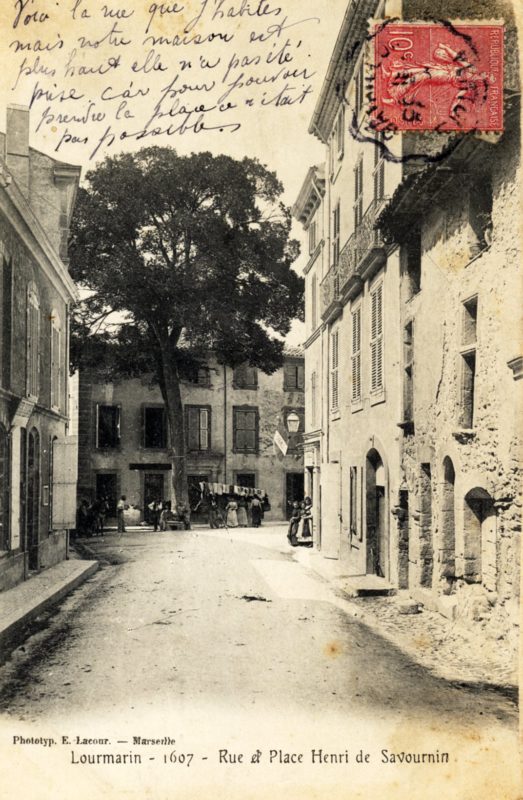 Part One of Two Parts

“Postcards from France” was inspired by the current exhibition at the Museum of Fine Arts (MFA) in Boston entitled “The Postcard Age: Selections from the Leonard A. Lauder Collection,” featuring over 700 miniature pieces of art from his very sizable collection of postcards. Today’s post focuses on postcards of Provence and the Côte d’Azur and what I learned from the curator of this MFA exhibit about the history of postcards. Next week’s post will feature postcards from the other regions of France and I will present what I learned about Mr. Lauder’s collection of postcards. I am grateful to two friends from France who made their postcard collections available to The Modern Trobadors.

When I am in Lourmarin, I can be found many a morning at Café Gaby. Look for my table at Gaby’s along the rue de Henri Savournin. It’s the one with a grand crème, the International Herald Tribune, and a stack of postcards. I am the one busily scribbling notes to friends and family on my carefully selected postcards. (My husband is the one bemoaning the cost of postage.)
I love postcards…both to send them and receive them. (Thanks Gerry and Ben for the postcard last week!) 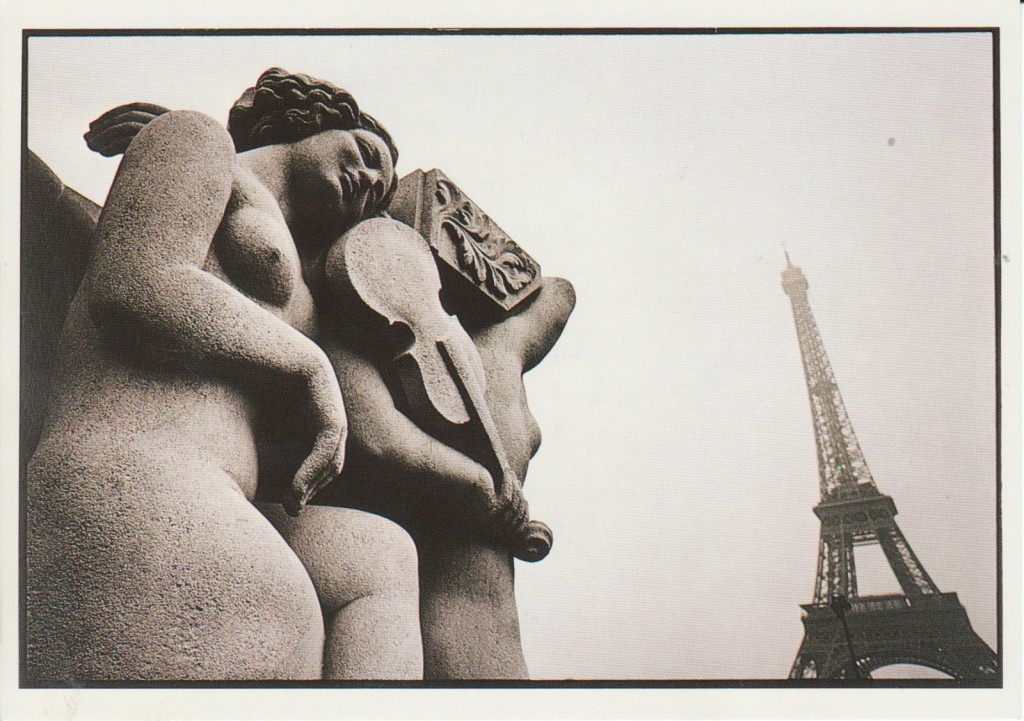 I like the artsy photographs like the ubiquitous rows of brightly colored lavender or the classic Provençal storefront such as Lourmarin’s (in)famous Super Taf II or the perfectly kept 2CV with a cat nonchalantly bathing itself on the hood. (If you’ve been to Provence, you know the ones!)

Postcards of the photos of popular tourist sites also speak to me. For example, Lourmarin’s château and the village Protestant church; Cucuron’s Étang; or Vaugine’s 11th century church.  Watch the slideshow below to see early 20th century postcards of Lourmarin and the surrounding area. (Wait for the show to load and then enjoy!)

I also like the cards that feature artwork—paintings or sculptures, for example—by well-known artists whose work I’ve just admired in a museum or by unknown artists whose names I many never see in print again.
I particularly like postcards of everyday scenes, ones that capture the daily life of the region. 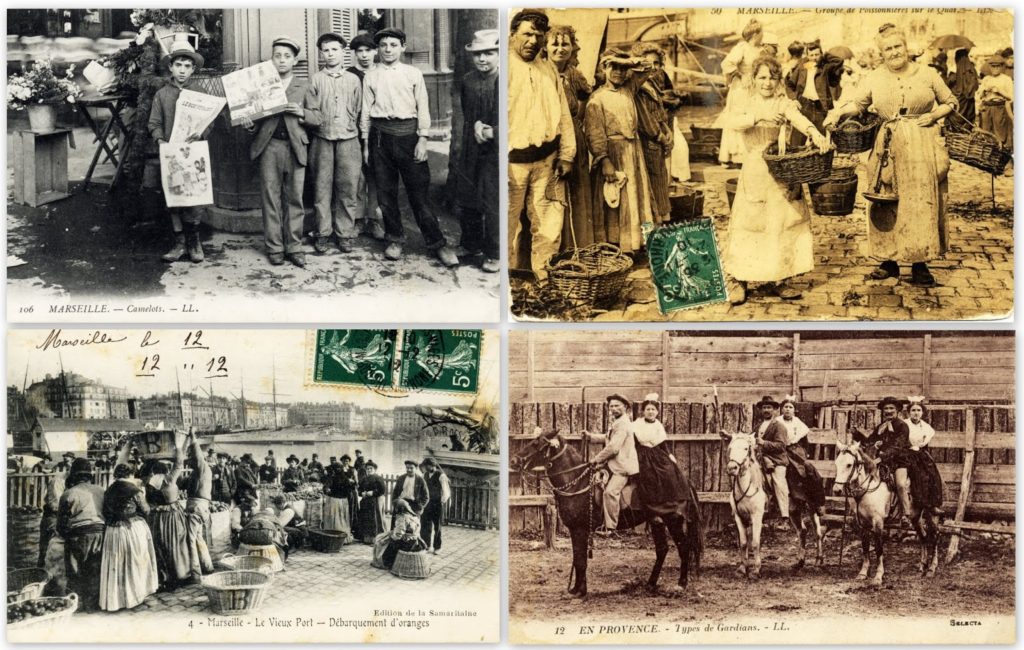 So, when I read about Boston’s Museum of Fine Arts exhibition of postcards from the vast collection amassed by Leonard Lauder, son of Estée and now chairman emeritus of Estée Lauder Companies Inc., I knew I had to see it. The show of 700+ postcards is just a tiny part of his collection of over 100,000 cards (which Mr. Lauder recently gifted to the MFA). The wonderfully displayed exhibition has the types of postcards I just mentioned as well as other genres such as those that are essentially advertisements, “news photos,” or “propaganda. “

The postcards in the exhibition are beautiful, humorous, clever, and moving, and they tell a story of life between 1890 and 1940—The Postcard Age—and especially between 1890 and 1920. The postcards in this post are not from the Lauder collection, of course, but, like that collection, they reflect the same period and are beautiful, humorous, clever and moving as well.

A little Provencal humor about the mistral and staying safe at sea!

It must have been excruciatingly difficult to select such a (relatively) small number of postcards for the show. But the curator of the show, Benjamin Weiss, along with Lynda Klich, rose to the occasion—the show is inspired. I recently had the pleasure of hearing Mr. Weiss talk about “The Postcard Age.” It was a full-house on a cold Thursday evening in January and it seemed everyone was pleased that they had braved the chilly weather to hear about the history of postcards and Mr. Lauder’s collection. My friend Audrey Gottleib and I were enthralled with both the talk and the exhibition.

Sanatorium de Courmettes “The cure of the sun on the terraces”. Wish I were there!

In today’s post, I will share with you what I learned about the history of postcards along with examples of cartes postales from Provence and the Cote d’Azur. Next week, I will share with you what I know about Mr. Lauder’s collection along with examples of cartes postales from other regions in France. I happened to have two friends who have collections of postcards and I am grateful they were willing to share some of them. (Looking at their collections gave me some sense of the enormity of the task Mr. Weiss and Ms. Klich faced with 100,000 postcards—although I looked at far fewer postcards, the culling process was very difficult–I loved them all!)
The first post cards, Mr. Weiss explained, were very simple: just a card with a brief note of a sentence or two on one side and the address on the other. No text was allowed on the address side. This rather primitive prototype had its start in 1869 when the Austro-Hungarian Postal Service said it was okay to send a card without an envelope. They were quick to write and inexpensive to send—they became popular almost immediately.

A postcard commemorating the “invention” of the postcard in France. Shown is a facsimile, pulled from the orginal printing plates, of the first postcard (published in 1870).

Very shortly after the introduction of this simple and unadorned postcard came a version with an image on one side, according to Mr. Weiss. The message was still short and it was confined to a small place, typically in the corner and away from the image. Eventually the images grew larger and, before long, there was only room for a signature and date.
It would not be long before the postcard’s popularity spawned an industry: advertising was introduced on the postcard; postcard clubs were formed; magazines and conferences about postcards and the collecting of them were created; and paraphernalia for their collection were manufactured. 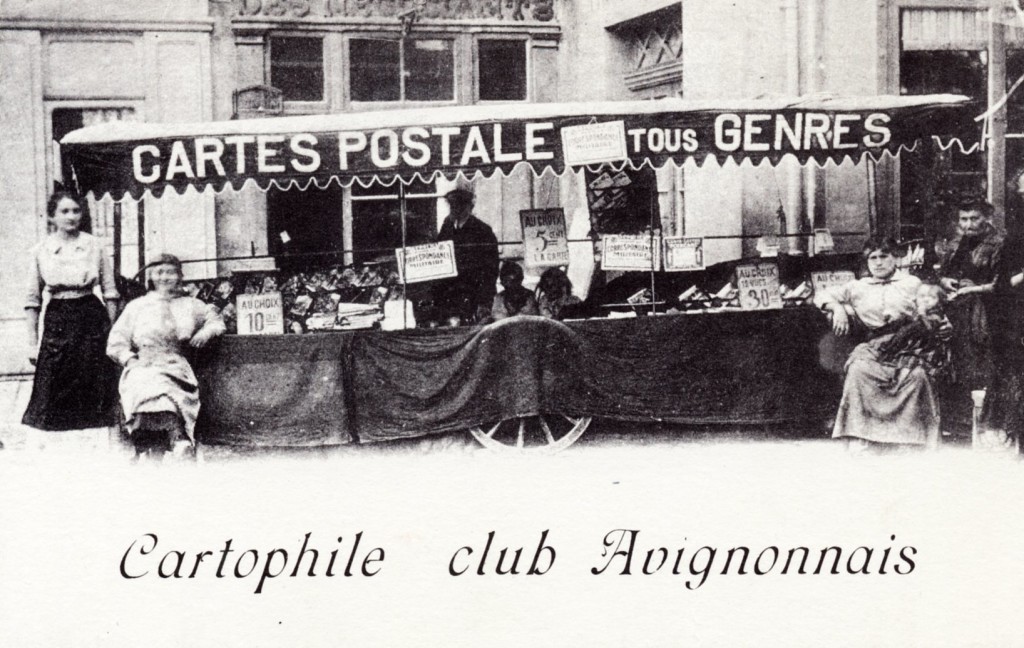 Postcard of postcard club in Avignon

The “Michelin Man” (whose name is Bibendum, I learned) was introduced to the world in the late 19th century on a postcard! Even many of the postcards that were exchanged between soldiers and their families during the First World War displayed advertisements. Some say that advertising had its start with these 5 ½ by 3 ½ inch cards. 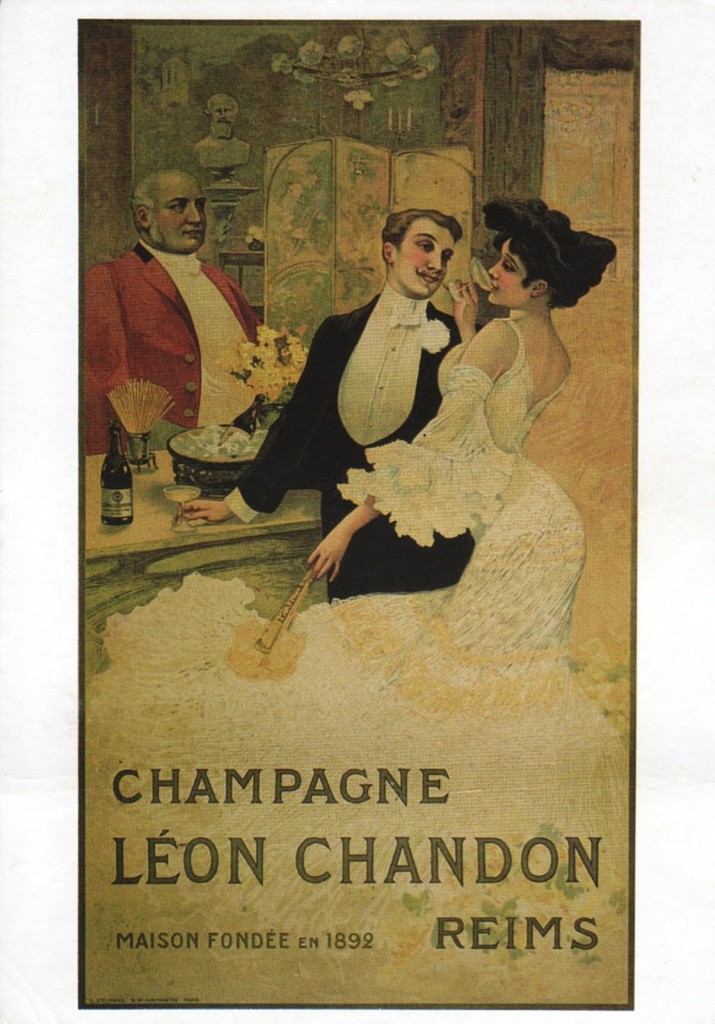 In 1902, Mr. Weiss told the audience, the British Postal System introduced the “divided back” in which one side was dedicated to an image and the other side to the address and a (longer) note. This “divided back” postcard caught on immediately and its popularity swept across Europe and the United States.
Mr. Weiss noted a similar evolution of correspondence with email. Do you recall that the first emails were short and to the point? (That seems so long ago.) Only later did they evolve into the longer (and supposedly more informative) missives that we receive nowadays. Interestingly, the correspondence via postcards was similar. In fact, apparently early 20th century critics of contemporary culture wrote about their fears that good writing and formality of communication would go by the wayside. (Sound familiar today?)
In 1903, 1 billion cards were processed by the German Postal system, according to Mr. Weiss, and in 1909, the British sold 833 million postcard stamps. People were mad about postcards—there were even postcards of pictures depicting people who were mad about postcards. They were already widely used for advertising and, because, after the turn of the century, they could be produced so quickly, they were often a more effective medium than newspapers to pass news long distances. There were photo postcards, for example, of the 1910 flood in Paris that got to people before newspapers did.
But, mostly, postcards back then, as now, were used by people like you and me who, when traveling, want friends and family to know that they are in our thoughts.

Postcard from La Chapelle of Cousson

The MFA exhibition includes postcards from the late 19th to the early 20thy century and reflects the issues of that period—industrialization, technology, urbanization, immigration, and women’s roles—as well as the changing attitudes about culture, class, and money; women’s rights; fashion; and even physical fitness. World War I is largely responsible for squelching the world’s passion for postcards: the mood turned gloomy but the war also created supply shortages and halted production. Many postcards were produced in German (as is evident in the exhibition) and their factories were destroyed in the war. Postcard popularity reemerged after the war, but never to the extent seen before the first WorLd War.
Maybe as a backlash to the rather dull medium of email, now widely used to share news of travel and to express personal sentiments to family and friends, postcards will regain popularity. Ah, but they are expensive to mail. In France, strangely, it is less expensive to mail a postcard in an envelope….is that still a postcard? 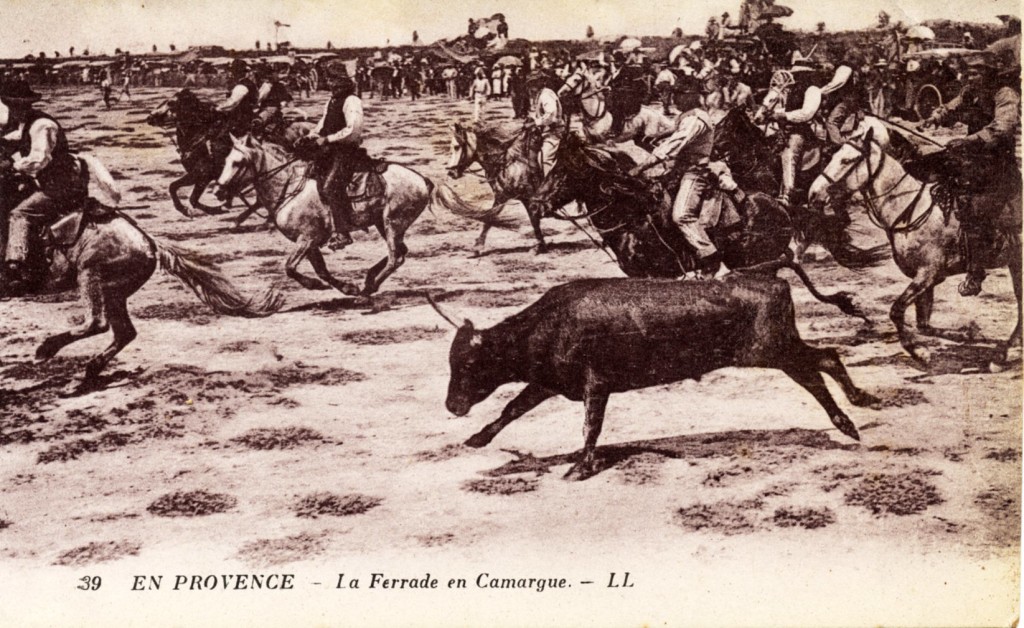 Postcard depicting the “branding” of the bulls in Camargue

Come back next week for more wonderful postcards from France!
If you live near Boston, the show runs through April 14, 2013. Mr. Lauder will speak about his collection on March 6th. It’s a fun and informative exhibition.

Click on the postcard below to see a slideshow of postcards we might have sent from Marseille in the early 1900’s: 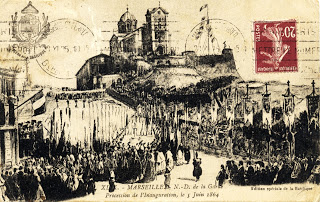 Click on the postcard below to see a slideshow of postcards we might have sent from the Cote d’Azur in the early 1900’s: