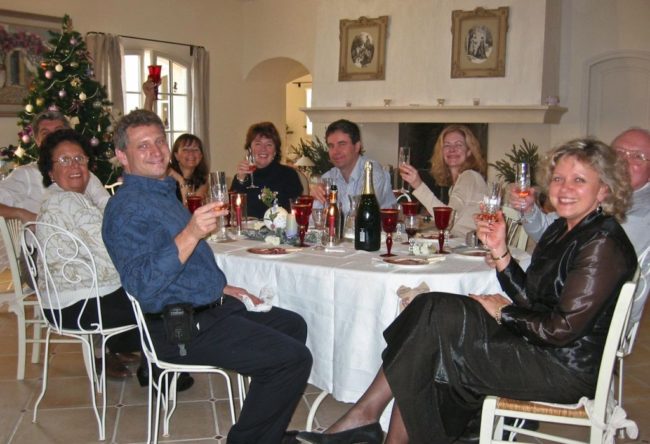 At some point, midway through the procession of holiday dinners at our home this year, the subject of ‘bon appétit’ raised its controvertible head. (Again.) You may not even have known, until now, that it had a controvertible head. You, dear reader, are likely part of the majority of people who merely thought of the phrase—to the extent that you gave it any thought at all—as a festive salutation from the host to “enjoy the meal” and, with this pronouncement, blithely assumed it was the signal to begin the meal. Ah, but you underestimated the significance of these two little words—to some people, these seemingly innocuous words are loaded with information about your knowledge of proper etiquette and even your social status.

The last time I really thought about this topic was when we were preparing for our long stay in Lourmarin. Somewhere in my review of French manners, I read, among other things, that one’s hands should rest on the table (and not on one’s lap as any well-bred American learned) and that one never says ‘bon appétit’. 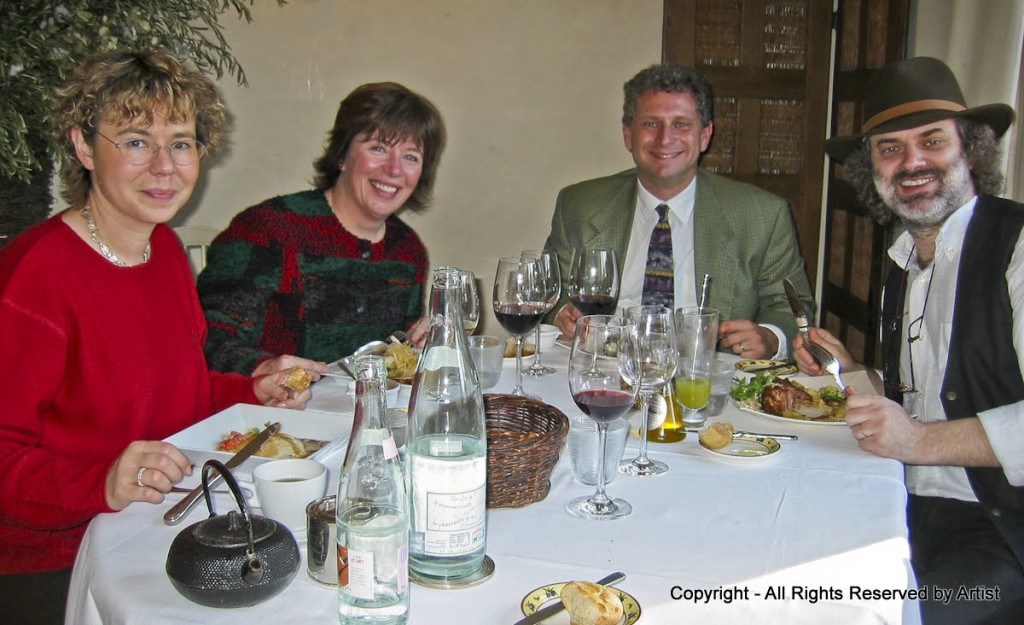 I did observe—and had confirmed in conversations over and over again—that, apparently the French harbor some concerns about what your hands might be doing under the table and therefore prefer to see them. But I was never able to find evidence in support of the ‘bon appétit’ advice. It seemed to be said at almost every table everywhere we went (by people with impeccable manners and impressive stations in life).

That uttering ‘bon appétit’ is not proper etiquette apparently has its roots in 19th-century ideas that any discussion at the table of bodily functions—assuming the two words translate to “good digestion” rather than “good appetite”–is vulgar. Furthermore, “good digestion” implies that the guests, being ravished with hunger, would eat anything set before them and that their digestion of that food required some positive thinking to successfully digest.

This would be an interesting tidbit of culinary history if it were not for the fact that people, especially journalists, seem to keep this idea alive—without any sense of context. A quick google of the offending phrase reveals that ‘they’ say that it is rude to say ‘bon appétit’ and yet many of the same articles go on to say that everyone says it. An article in The New York Times makes this point clear.

I would get to the bottom of this apparent conflict with a survey, unscientific to be sure, but one that might cast some light on the subject. I called my friends to weigh in. 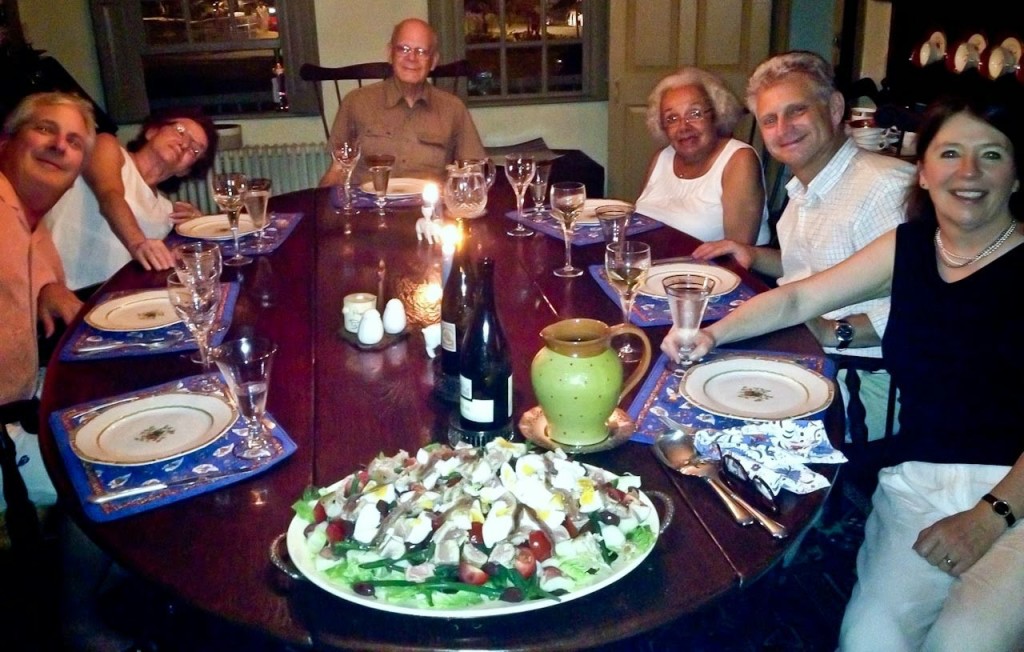 Only four people I (or my husband whose French language services I enlisted) were even aware of any controversy over the etiquette of saying “bon appétit” at the start of a meal. Admittedly, it was a small sample of French, American, and English friends—some living in France and others in the States—and the group of interviewees was certainly not randomly selected, all having some connection to me, but nonetheless, the sample comprised educated and cultured individuals that reflect a wide range of socio-economic status and age as well as both genders.

Most people we spoke with were completely unaware of any controversy about the use of the phrase. Those people felt that it was preposterous to think that wishing one’s dining mates ‘bon appétit’ was a sign of bad manners or, worse yet, an indication of lower class.

Pierre Schott, French man who lives in Provence and has long been in the hospitality business in several regions of France, said that he was completely unaware of this controversy and that it was a commonly used introduction to the meal. He said that he often says “Bon appétit” when hosting a meal.

Jacqueline Bricard, French woman who is the owner of a Galerie Jacqueline Bricard, in Lourmarin, France, said that “you hear the phrase every day.” When asked if ‘bonne degustation’ would work as an alternative—as suggested by some sources on the internet—Bricard laughed and replied, “Ça me ferai rire.” In English, “That would make me laugh.”

Jean-Christophe Barré, a French man from Normandy who now lives in Portsmouth, NH, teaches French at the school he founded, Active French School, a program that emphasizes French culture as well as language.   He has taught French in France and in the States for over twenty years. “I have never heard that ‘bon appétit’ could be anything other than a polite ‘enjoy your meal’.”

Lisa Harper, retired American Foreign Service officer, who grew up in Paris with her Foreign Service father and family and attended Couvent des Oiseaus in her adolescent years and, years later, returned to live and work in Paris, said “her school was the most chichi school in Paris and that the nuns were diligent in their teaching of etiquette.” Harper said that if saying ‘bon appétit’ was improper, it would have been drilled into her head not to say it. It was never mentioned, Harper said.

On the other hand, American Pamela O’Neill, who has lived in Cotignac, France, for over a decade, said that she learned of the issue through a good friend, Yan Nascimbene, who was raised in a family that was adamant that one does not say ‘bon appétit’ while seated at the table. Nascimbene, illustrator and photographer who died last year in Mexico, was a descendent of the Dubonnet and Coty families of France and the Pigozzi family of Italy (that founded Simca car), and said that his mother was uncompromising in her belief that it should only ever be said if passing a table in a restaurant or by the waiter.

Bradbury Kuett, American who has lived in the Vaucluse since 2008, writes Provence Ventoux: Le Blog, and dines among “la bourgeoisie terrienne,” acknowledged the issue but effectively brushed aside any significance it might still have today.

“There was an epoch when ‘bon appétit’ was out of favor…. Currently, it is used casually from time to time, most frequently when there are guests at the table or at a restaurant, or any other formal setting. Or a holiday meal.” 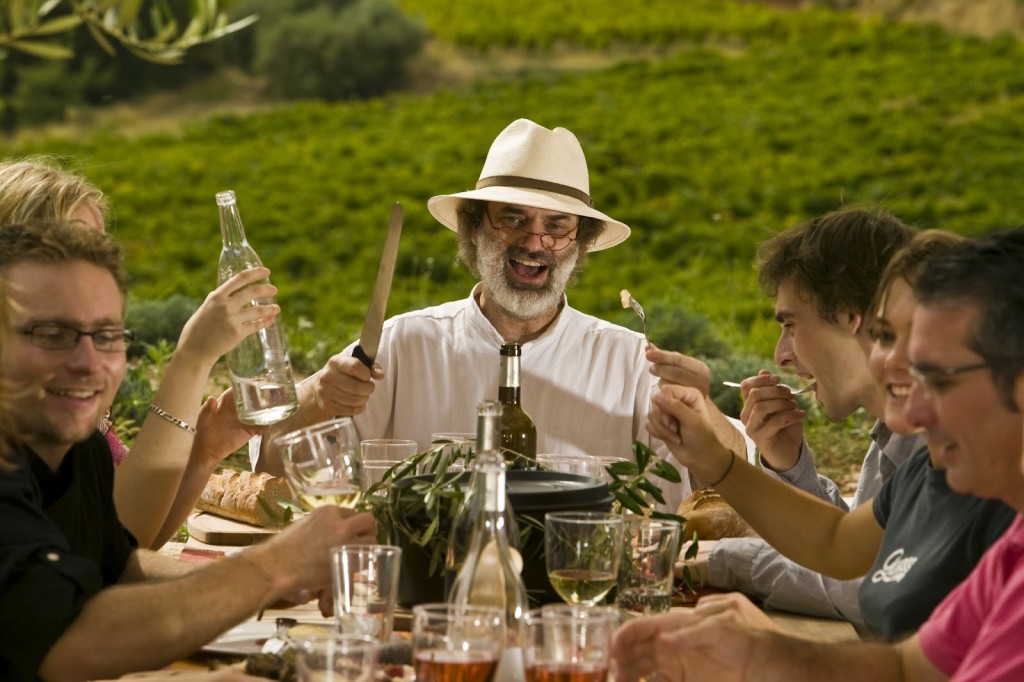 The context in which to use ‘bon appétit’ is probably the most important factor to consider before casting the phrase out to the table, according to Françoise Kinzel, French ex-pat who now lives in Fresno, California with her American husband, retired French and Linguistics professor at California State University, Fresno. Kinzel said that when she grew up, it was not said in her home but, today, it is commonly said and would be very appropriate to say with friends and family at a casual meal. Kinzel conjectured that language, especially colloquialisms such as ‘bon appétit, change over time—of course, younger people use different terms than her generation, she said. She also wondered about regional differences in France—in comparing Paris to Aix-en-Provence, for example, she said that she heard expressions in the latter city that she had not heard in Paris.

Madame Kinzel’s counsel to consider one’s context is sage advice. At our table, you might hear my husband or I say ‘bon appétit’ to commence the meal. But, depending on the guests, we might signal the start of the meal with a toast to the health of friends and family or a prayer to thank the hands that prepared the meal. Follow the lead of host or hostess. Generally, it would not be appropriate to say ‘bon appétit’ if you are seated at a table and not hosting the meal.

Today, the connection between ‘bon appétit’ and one’s knowledge of etiquette is tenuous at best.  Really, there are far more effective methods to assess another’s manners (if you are so inclined). For example, it is rude, in any country, to begin the meal before the host and hostess have taken their seats and signaled in some way to begin. Don’t say “dig in” (and don’t ask me if I am still “working on my meal”). And, really the French are right about nixing any conversation about bodily functions—“NTT,” as good friend Mark would say, “not table talk.” When in France, do keep your hands on the table and never say “Je suis plein” if you are trying to convey you are full. (While it literally means “I am full,” something one wouldn’t say anyway, it translates, “I am pregnant” or “I am drunk.”)

Likewise, the use of this phrase is not an effective barometer of one’s social status…although looking down on its use may reveal a certain snobbery.

I say if the world’s favorite French chef can say “bon appétit,” can’t the rest of us?