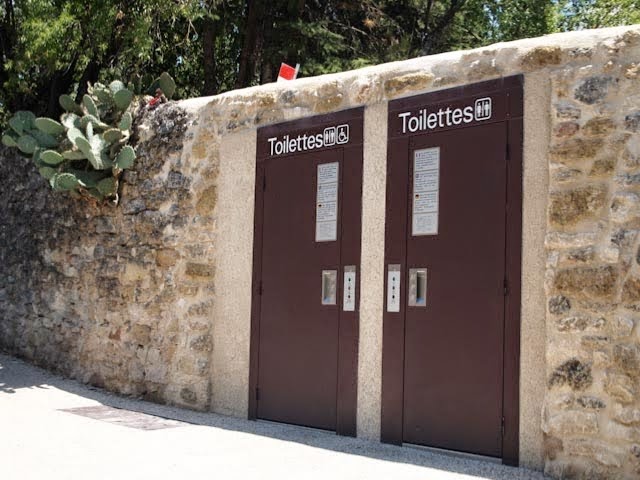 It’s August and, as tourist season moves into full throttle in little Lourmarin—crowds bulging at the seams by mid-morning in the Friday market and bonnes tables harder and harder to snag—it’s good to know there is relief in one area. Lourmarin has some new public bathrooms and, all snickering aside, this is un grand soulagement!  (That is, a big relief!)

Two free public toilets with automatic cleaning—one with handicap accessibility—opened in May. They are conveniently located near the main parking area (called Parking des Cerisiers) and La Place Henri Barthélémy. 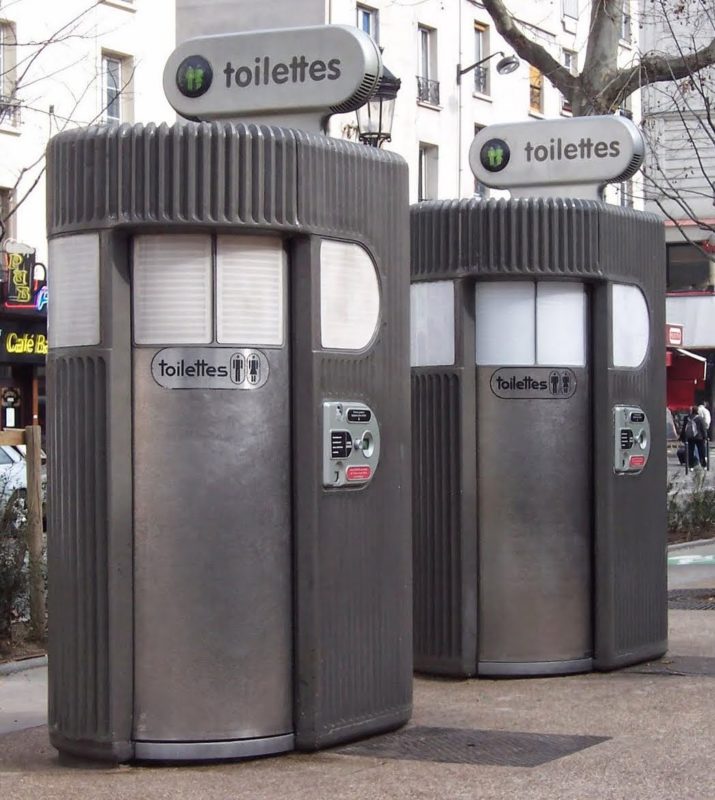 You may have seen this type of toilet in larger cities (in France and elsewhere) and in public places (the Aix-en-Provence TGV station, for example) where they look like something plucked out of the Jetson’s version of the space-age. These pod-style toilets were, at least to me, rather intimidating at first glance.It had been our experience that these are often out-of-order, as indicated by “hors service” but, in Lourmarin, they seem to be regularly open. If it is not occupied, as indicated by “libre” or a green color near the door handle, open the door and go in. When finished, open the door and go out. (If you haven’t opened the door in 15 minutes, typically, the door will automatically open although I did not test this feature out in the Lourmarin toilets). Once you close the door on your way out (or, in other places, once it automatically closes) the inside is sprayed with a disinfectant.

So, do make sure that once you open the door to leave the bathroom, you do vacate the facility. A friend of mine, who used the aforementioned facility in the Aix-en-Provence TGV station, told me that, having finished her business, she opened the door and started to leave, realized she had something else to do, and closed the door which prompted the disinfecting process to begin, completely soaking her! (This was not Lourmarin, but I would be mindful not to open the door until you are ready to leave!)

The Lourmarin toilets were very clean, were equipped with toilet paper and soap, functioned perfectly, and, again are free of charge (unlike these facilities in other cities and public places).

As long as we are on the subject of toilets and because I have discovered that, snickers notwithstanding, most people have a modicum of interest in porcelain bowls and many people are so unfamiliar with the range of possibilities in this category, they find themselves unprepared to use some of the toilets they encounter in France. I will take this opportunity to review them or refresh your memory, as the case may be. 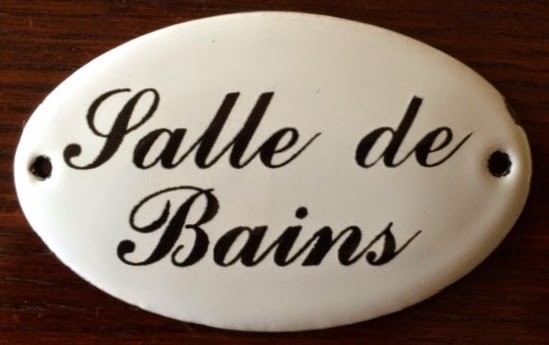 First, the salle de bains (French for “bathroom”) usually refers to the bathroom in someone’s home and, in any case, does not necessarily have a toilet in it. Look for Toilettes or W.C. (“Water Closet”).

Second, lights are often on timers. So, there are no switches; instead you must close the door to activate the light.
Third, toilet paper is reportedly considered an amenity although, in our experience, it has usually been there. It was in both bathrooms in Lourmarin (but, best to carry your own to be sure). 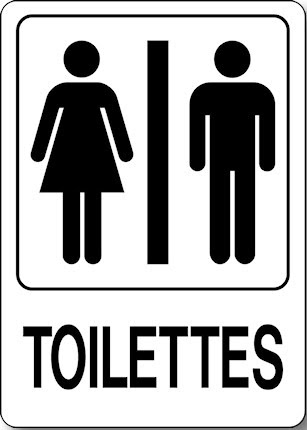 Fourth, unisex facilities are common in bars and cafés. Unlike what one finds in the States in which one individual bathroom is shared by all, one at a time, these are a row of toilets, side by side, for men and women (with doors, bien sûr) and with one sink to be shared by both. Occasionally, it may be necessary to walk by the urinals to get to the toilets.

Fifth, “squat” toilets (a.k.a. “Turkish toilets”) are still occasionally found in public facilities, bars, and cafés. These are essentially a large porcelain basin with a hole near the center and two shoe-shaped platforms on either side for your feet. Carefully place each foot in its designated position, squat, and go. Sometimes, there’s something to hang on to, in order to maintain your balance. When you flush, make sure that you are as far away as possible because these toilets are notorious for a wide swath of spray. Although intimidating at first, they are not as difficult as they appear and are, arguably, more sanitary.Sixth, regarding the subject of flushing, the French have a large repertoire of mechanisms to initiate the flushing process–and these are found in a variety of places. Look on the top of the tank for something to push or to pull; above the toilet for a chain to yank; behind the toilet for a very large circular- or rectangular-shaped button to press; toward the base of the toilet for a peddle to press; on the floor for a large button to step on; or, alas, alongside the tank of the toilet, for a familiar lever to push or pull. The buttons or bars may be divided into two parts, with the smaller one devoted to flushing urine and the larger part to be used for business that requires more water. 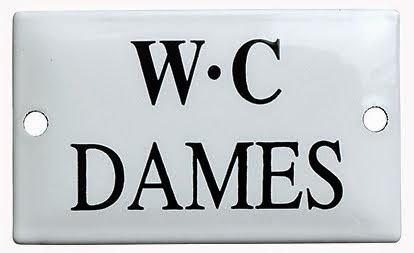 Seventh, using the toilet may cost a little money. In nicer restaurants, especially in cities larger than Lourmarin, there may be an attendant outside the restroom door who may even hand you a towel to dry your hands and would expect a tip of around 50 cents. (A euro would make her day and isn’t it nice to make someone’s day?) In other settings, there is an obligatory fee to use the toilet, collected either by the attendant or by inserting coins in the door. (I haven’t seen this in a long time.) In fast food establishments, apparently there is a code found on your receipt that can be used to open the door to the toilet (although we have never seen this).

Finally, France is also home to some of the most attractive bathrooms with the most modern conveniences we have ever found. I hope you find some of these facilities, too.

There are two other public toilets in Lourmarin.  Let’s just say that you won’t find the most attractive facilities in the public toilets near the boules courts on Boulevard du Rayol in Lourmarin, but if you are in a pinch at that end of the village, it’s good to know they are there.  There are also public bathrooms alongside the stairs going up to  Place Henri Barthélémy from Avenue Raoul Dautry….but, if you are there, you can probably walk a little further to try out the new toilets!