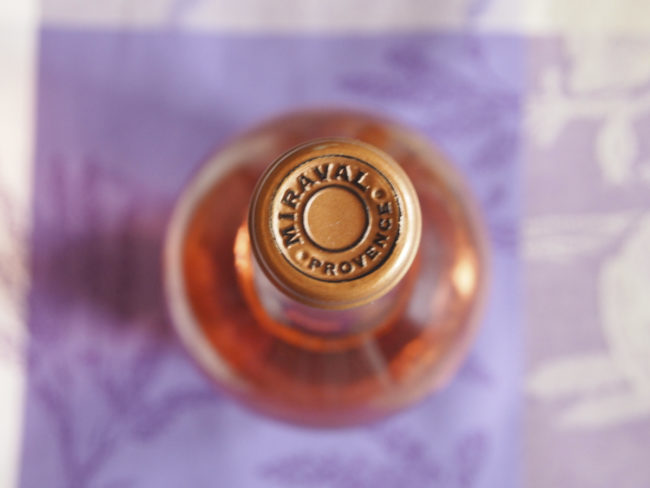 This morning I received an email from Marc Perrin, from Famille Perrin (the well-known multi-generational wine family from Châteauneuf-de-Pape that is now in partnership with Château Miraval). As readers of Sunday’s TMT post (10/13/13) about Miraval’s grapes are aware, I had written to him but had not received a response prior to posting “The Curious Case of Miraval’s Grapes.” For those of you who are curious, I have answers.

A little background: Famille Perrin, according to their website, is “the leading organic wine grower of the Southern Rhone Valley” and, although they produce a range of wines from various estates, they are probably best known for their legendary Château de Beaucastel and, at the other end of the spectrum, the ubiquitous La Vieille Ferme. In between, there are many other wines including, as of 2012, those from Château Miraval.

In my earlier post, I expressed my curiosity about the provenance of  the Miraval grapes, as the title suggests, and mused over the possibilities. Now, with input from Perrin, we have some answers.

First, the “organic” status of the Miraval grapes used in the 2012 rosé. Given that Château Miraval vineyards are 100% organic; that the Château ’s early rosé, Pink Floyd, was “organic;” that the 2012 vintage was advertised as being “organic;” and that Famille Perrin had long been champions of organic viticulture, we wondered why the rosé—the first Jolie-Pitt & Perrin wine—was not identified as “organic” on the bottle. Second, we wondered where the grapes came from, if not from the estate. Third, we wondered where the white wines were, as they were scheduled for release at the end of the summer, and whether those wines would be bio. Fourth, where was the rosé produced and where will future wines (all colors) be produced?

Perrin responded that yes…”the viticulture on the [Miraval] estate is and will remain 100% organic,” but “they don’t claim organic status” for any of the wines. In the case of the rosé, they do “blend the estate grapes with some grapes from other vineyards nearby.” (For the most persnickety readers, I did not ascertain whether these grapes are organically grown or not.)

In the case of the white wines, Perrin wrote that “the grapes come 100% from the estate.” Still, they won’t be labeled biologique “[m]ostly, because we want to keep our options open in the future, both in terms of grape[s] sourcing (for the rosé) and in terms of [the] winemaking process.”

They are producing two white wines: a Coteaux Varois en Provence, which was released in early October, and a Côtes de Provence, which will be released in March or April 2014. The Coteaux Varois will be a blend of Rolle (95%) and Grenache blanc (5%). The Côtes de Provence will be 100% Rolle. As mentioned above, all the grapes will come from the estate and are organic.

With regard to where the wines are produced—at Château Miraval or Famille Perrin—Perrin responded that all the wines—white, red, and rosé—are vinified (essentially meaning the grapes are crushed and turned into fermented juice) at Château Miraval. In fact, they essentially added “a new winery” that, in addition to the one previously used, “included stainless steel tanks, inertys press…and all new state of the art equipment, specifically for the rosé.”

Perrin said, “Once the wines are ‘finished,’ they are shipped [to] Famille Perrin for elevage and bottling. He added, “The specific form of the bottle (and magnum and jeroboam) also [required] some heavy investment that were not manageable on the estate’s prior bottling line.” At Famille Perrin (in Orange), there is “a state-of-the-art bottling line and a quality control system and team which is top notch.”

“Elevage” is, according to the Wine Spectator glossary, the “French term for the progression of wine between fermentation and bottling….The raw fermented juice is shaped during this period into something resembling its final form, through techniques such as barrel aging, filtering and fining.” It is this stage that “the juice [can] achieve its full potential.”

Well, I think that settles all curious matters raised in the first post. As I wrote in that post, I am a big fan of Miraval rosé (as are the other folks who have tasted and otherwise enjoyed the wine with us). We were just curious about a few things and are appreciative of the answers. A good wine’s story is always interesting to know.

And just in case you are curious, you can taste the Coteaux Varois white at Famille Perrin in Orange. Or, if you are not in Provence, the first orders of that wine are being shipped to the US right now (although export quantities are small).