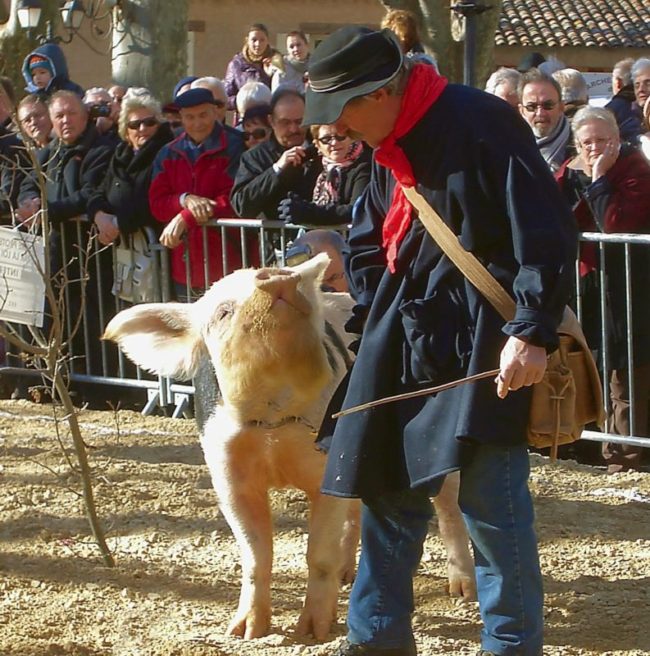 I am immensely grateful to Pamela J. O’Neill for her reporting and photographs of this event.

Aups, the small Provence village renowned for its weekly truffle market (every Thursday morning from mid-November through February), was the place to be last Sunday—it was the site of the 21st annual “Journée de la Truffe Noire d’Aups.” Held the fourth Sunday of January each year, this truffle festival draws hundreds of people who come to eat, drink, and “root” for their favorite dog in the truffle hunting contest. This year, attendees also had the pleasure of meeting one of the Var’s last remaining truffle-hunting pigs. 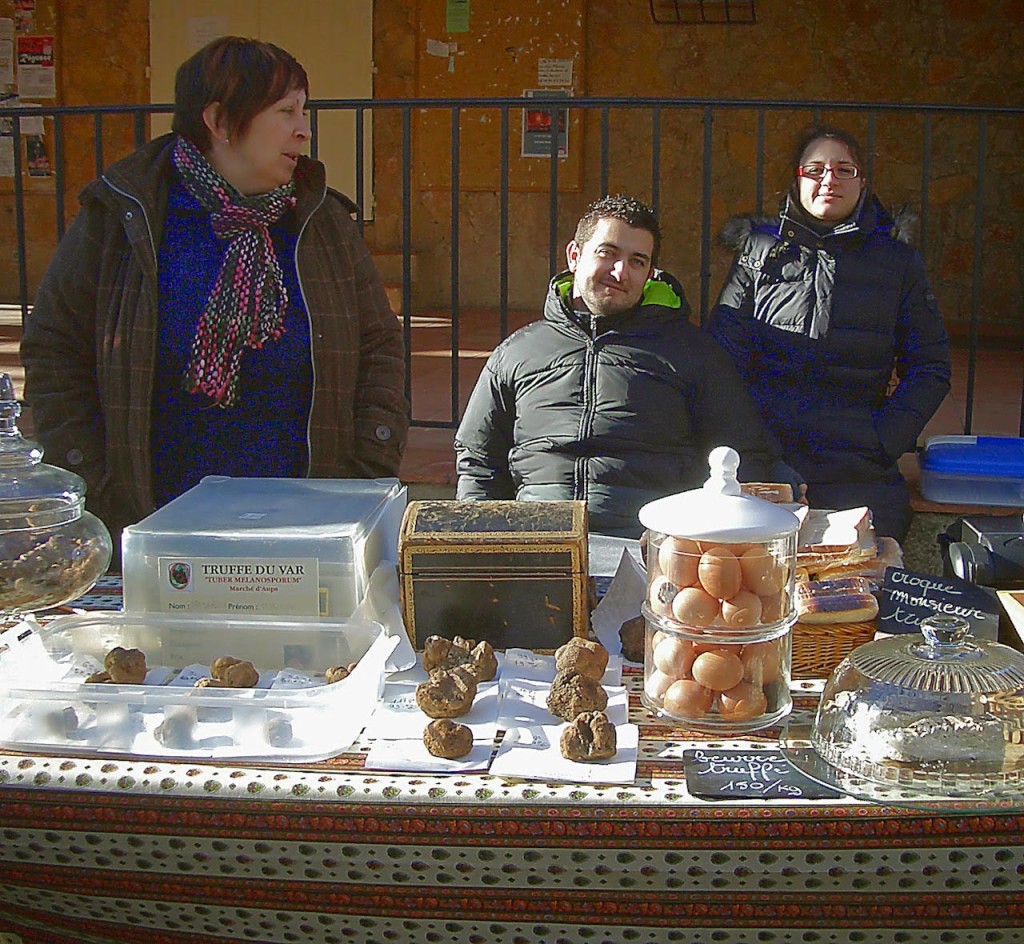 Fresh truffles are, of course, for sale but also available for your perusal (and to take home) is a smorgasbord of nearly every food you might ever have imagined stuffed with truffles or imbued with their distinctive scent: truffle ravioli, truffle butter, truffle cheese, truffle confit, truffle pâté, truffle oil, truffle vinegar, truffle honey, truffle salt, truffles preserved in oil, and even an apéritif of truffles. 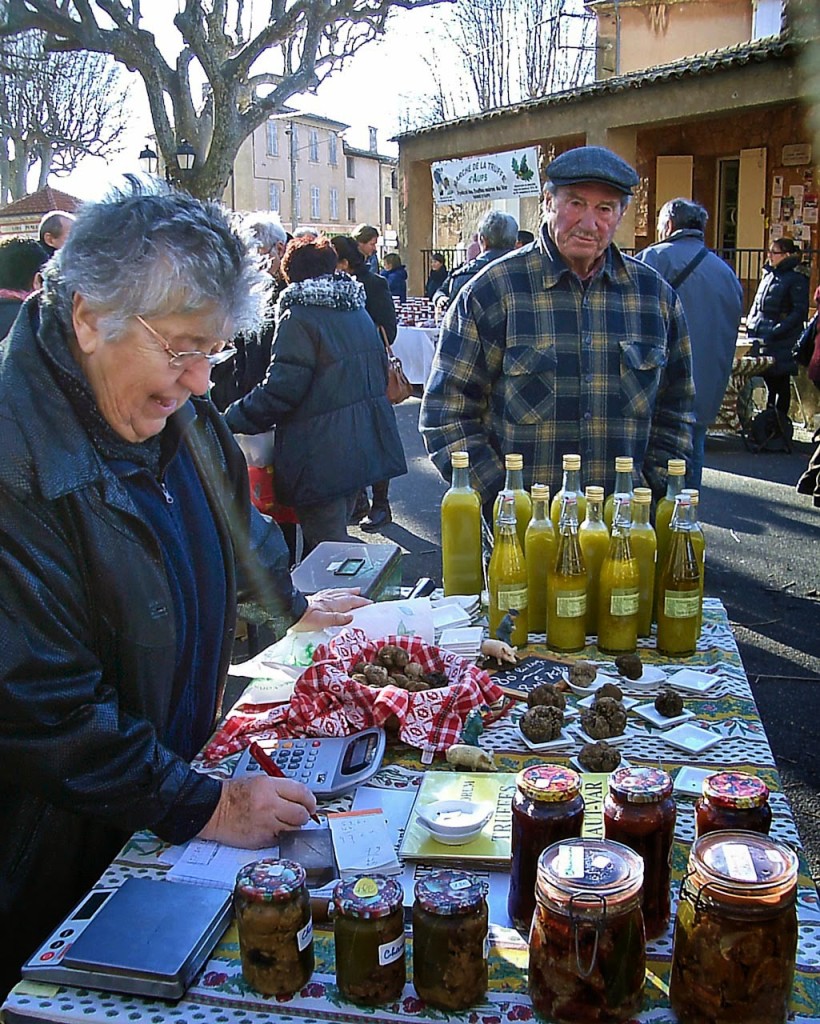 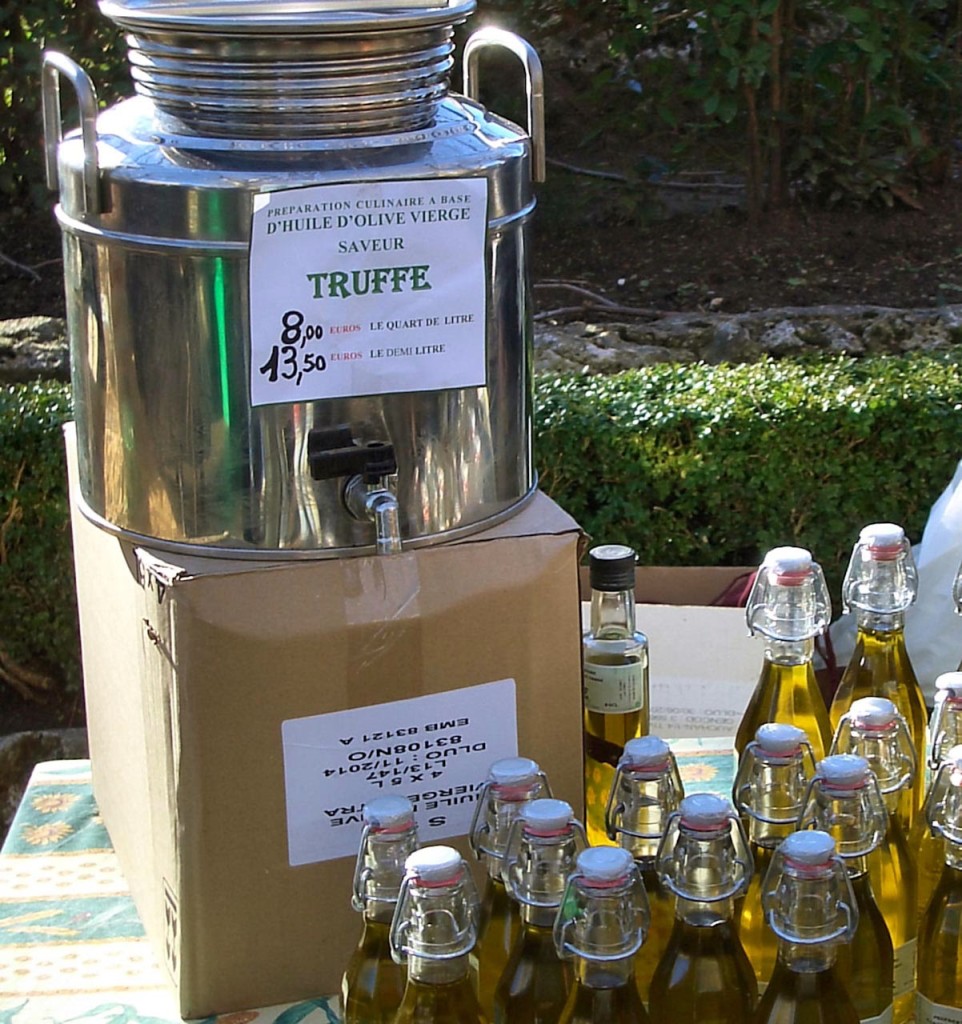 A true truffe gourmand can imagine other foods to stuff or imbue but you get the idea—there’s a lot to choose from at Aups’ Festival of Truffles. And there are more offerings from vendors who freshly prepare food— for example, scrambled eggs with shaved truffles, a dish called brouillade de truffe—or from village restaurants that serve special truffle menus for the day. 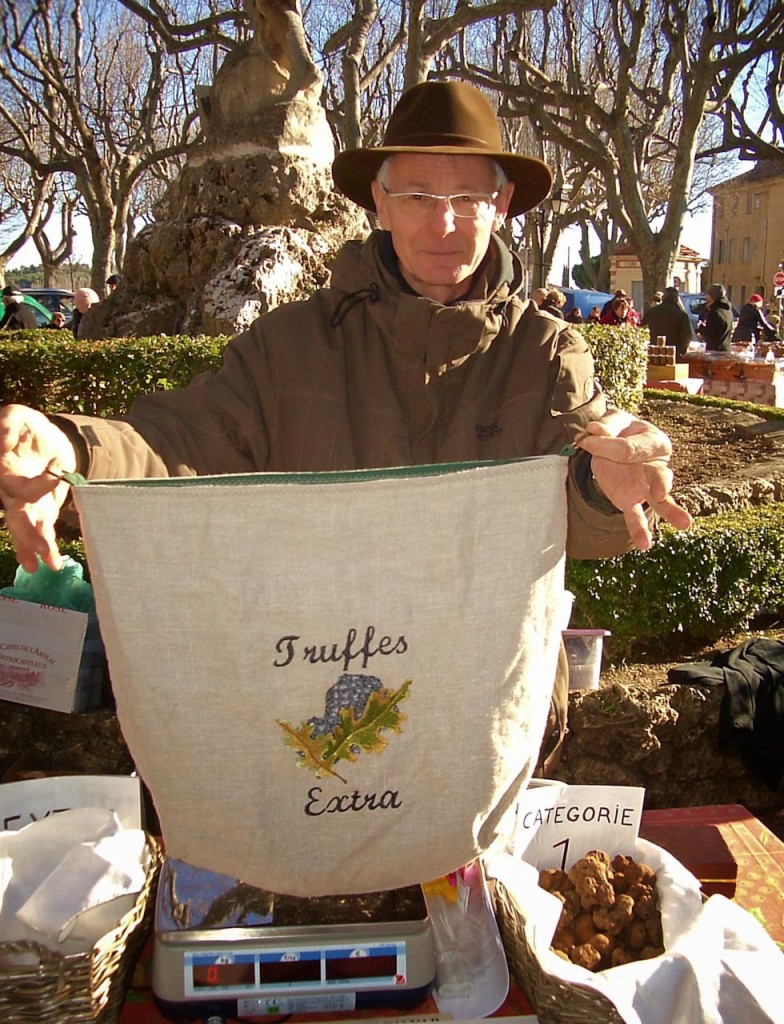 Let’s not overlook the many accessories for the truffle lover: truffle brushes, truffle bags, truffle slicers, and the like.

Provence, as TMT readers know well, is legendary in the world of tuber melanosporum, the scientific name for the species of truffle known as the French black truffle, black truffle, or Périgord truffle. The word ‘truffle’ probably stems from the Latin word “tuber” which refers to a “rounded swelling or protuberant part.” In French, the word is “truffe” and in Provence, the word “rabasse” may still be heard every once in a while. “Périgord” is often used because these truffles are native to the oak forests in an area in southwestern France in what is now called the Dordogne département (in the Aquitane region—not the region of Provence). Confusing, I know, but truffles have a long culinary history, going back, according to Wikipedia, as far as the 20th century BC.

France produces nearly half of the world production of black truffles, with around 80% of that production coming from the southeast part of France (upper Provence, the Languedoc département of Gard, and the Rhone département of Drôme). This same truffle also hails from Spain (about 35%) and Italy (about 20%) and in lesser amounts from Australia, New Zealand, and North America, where it is cultivated. 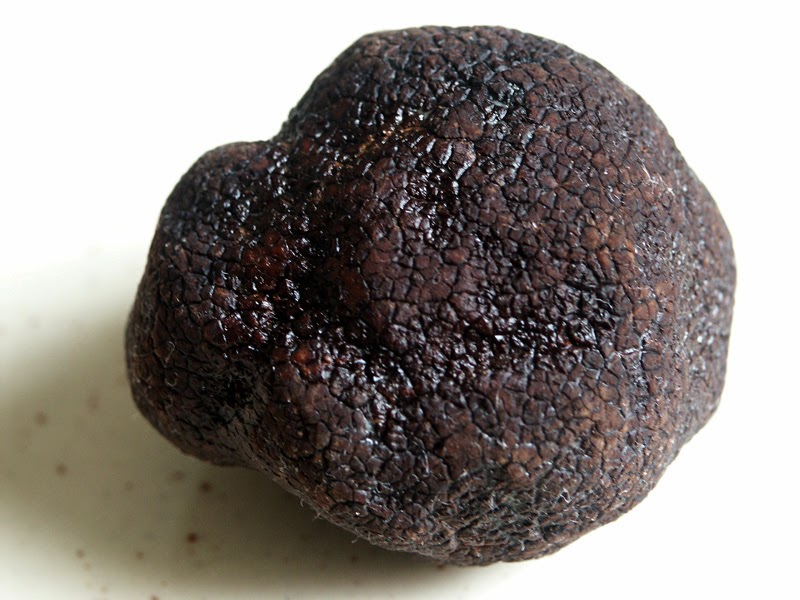 Tuber melanosporum are happiest growing near the roots of Oak trees (although they will grow near the roots of poplars, hazels, pines, lindens, hornbeams, and willows). Truffles have a symbiotic relationship with these trees. They form networks of fungi (about four inches or so under the ground) that are mycorrhizal; that is, they help supply essential nutrients and water to the tree and, in turn, receive sugars from the tree (a sort of indirect photosynthesis). Animals, such as squirrels, depend on truffles as a food source and truffles depend on those animals (as well as those who prey on those animals, like the owl who eats the squirrel) for spore distribution (via their feces). And, the animals depend on the trees to live in. (It is a really cool eco-system!) To grow best, they prefer relatively cool seasons punctuated by moderately hot summers with electrical storms and, most importantly, rain though out the year. 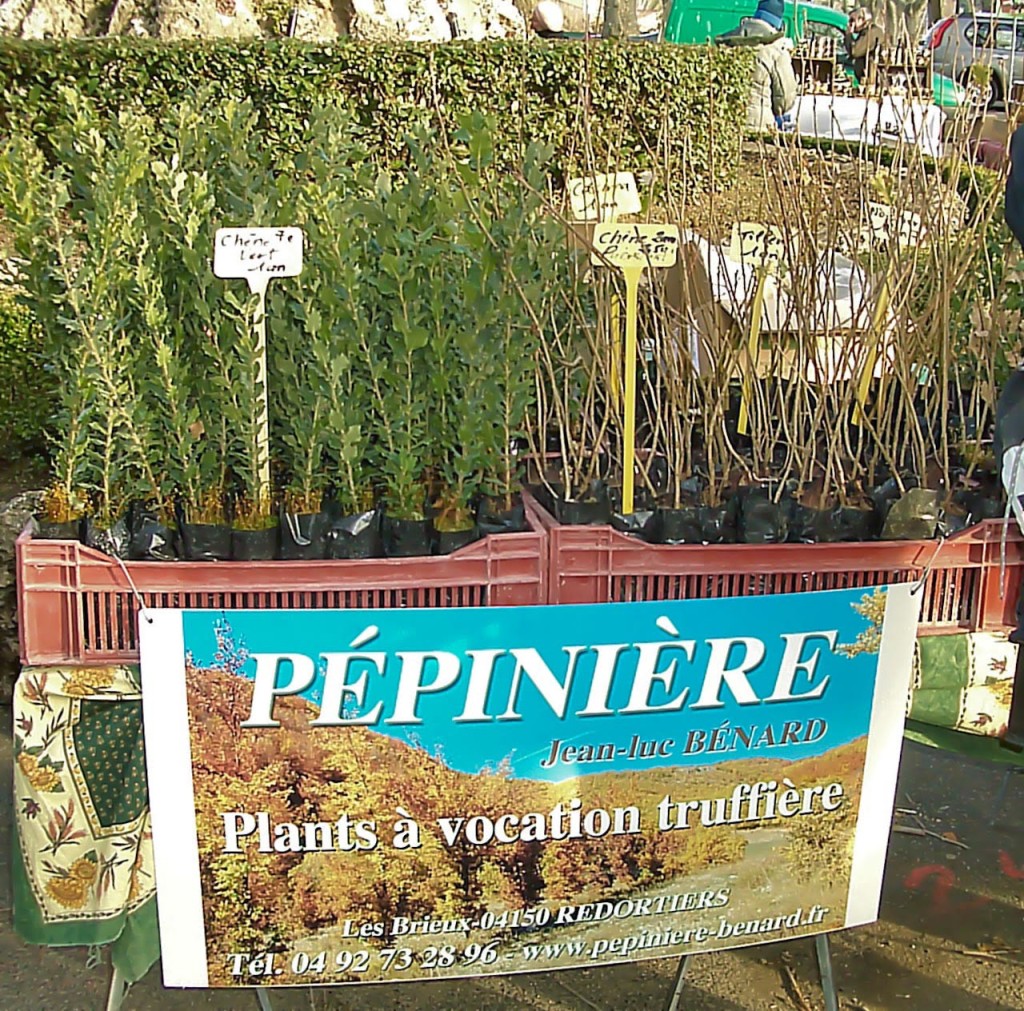 Aups certainly has what it takes to grow truffles although, as is the case throughout Provence, climatic conditions are changing and truffle production in France has dropped from an annual rate of about 1000 tons in the early 1900s to around 30 or 40 tons now. As a result, prices have climbed, thievery has increased, and other species have come on the market, legitimately, as alternative truffles, and illegitimately, posing as Tuber melanosporum. 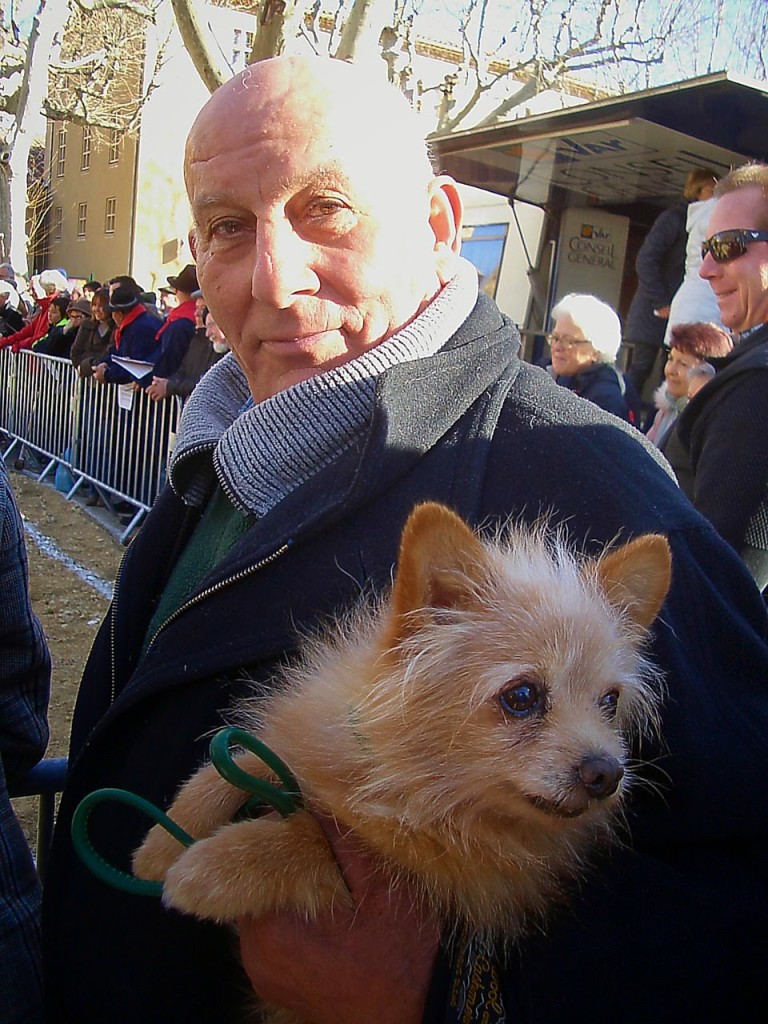 Although the black truffle harvest is the impetus for the festival, one of the most popular attractions of the event are the dogs—les chiens truffiers—that compete in the “Concours de Chiens Truffiers.” This year, around ten dogs vied for the title of best truffle hunter. The contest goes something like this: an enclosed ring is divided into quadrants and four truffles are buried in each one; each dog (and his master or mistress) enters their respective quadrant and “hunts” for the four truffles. The winner is the one who is fastest at unearthing the truffles. 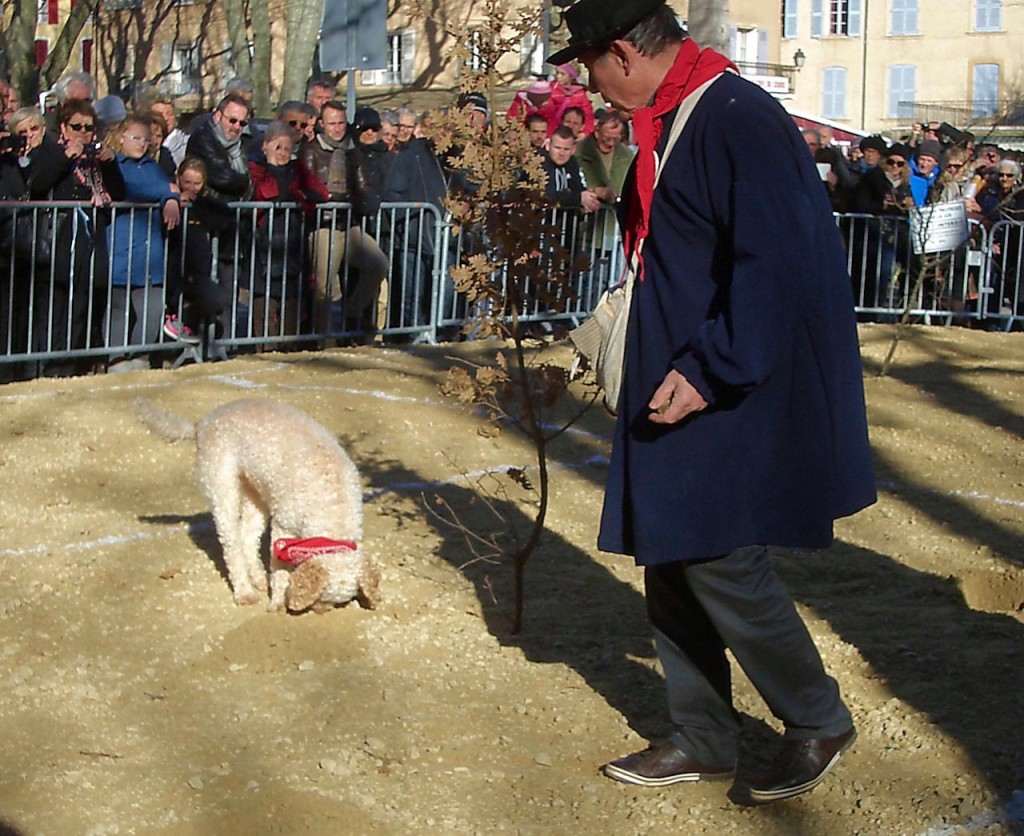 Specifically, the title is claimed on the basis of the dog’s average time of the finding the four truffles.  This year’s winner was Chika. Scuttlebutt from the crowd is that Chika, a mix of “a little Yorkie and something else black” is just 14 months old and said to weigh “one kilo and some dust, proving that only the nose is important.” 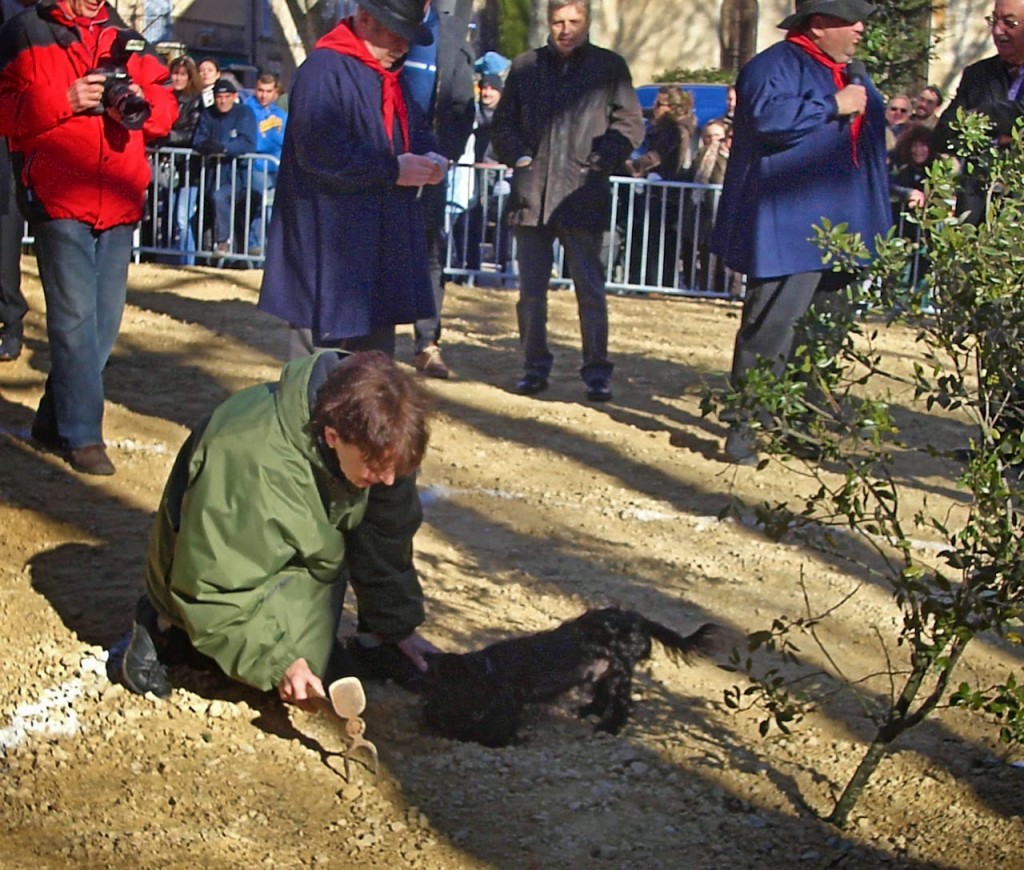 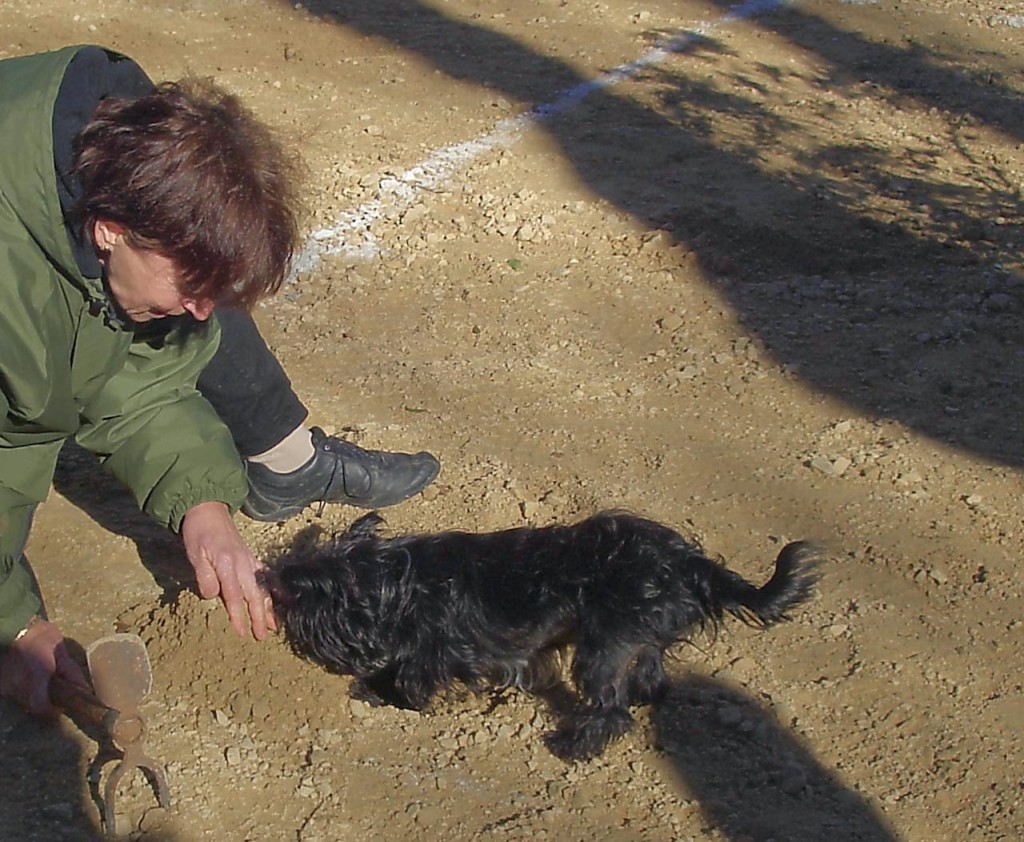 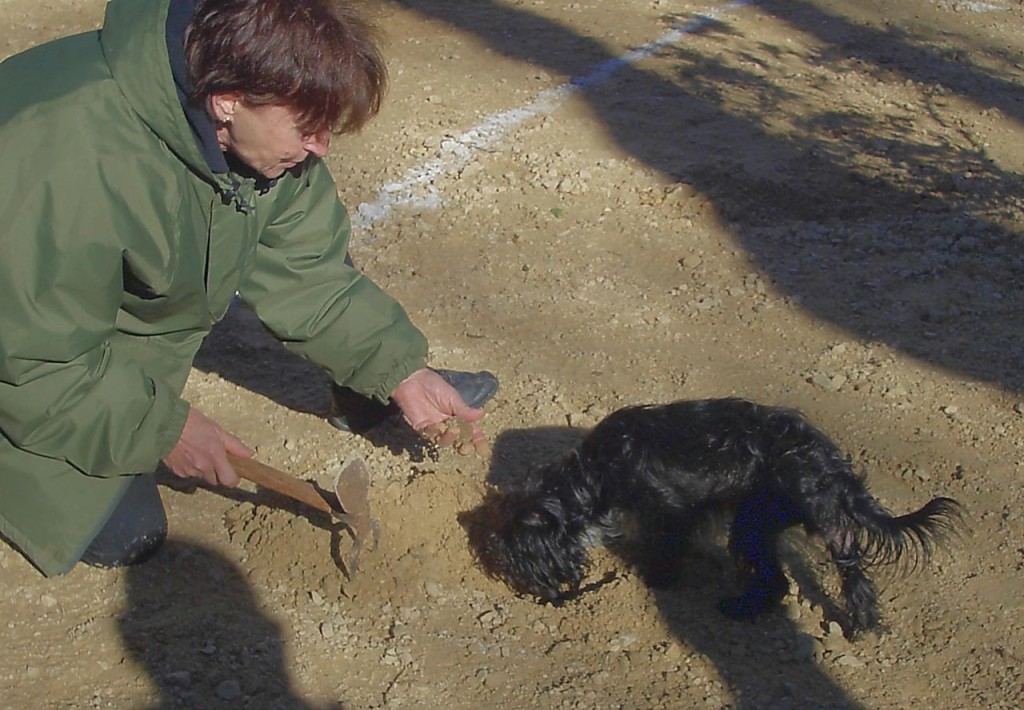 Chika was an instant celebrity but it was the pig who stole the show. Said to be the last of the truffle hunting pigs anywhere around, thus eliminating the possibility of a competition among pigs, this sentimental favorite demonstrated how truffle hunting used to be in the days of yore when pigs were the chief truffle hunters. 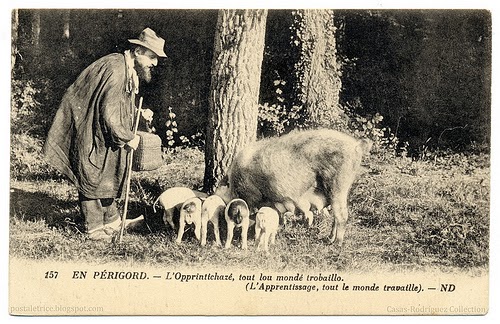 You see, the human nose is simply not sensitive enough for the task of sniffing out truffles several inches underground; but it was known that wild boar were very good at this, so farmers took their pigs into the forests to find the truffles (before the boar got to them!). Somewhere along the line, it was learned that the scent of truffles is remarkably similar to the male boar’s sex pheromone so female pigs came to be the desired sex to train for the job of truffle hunting. 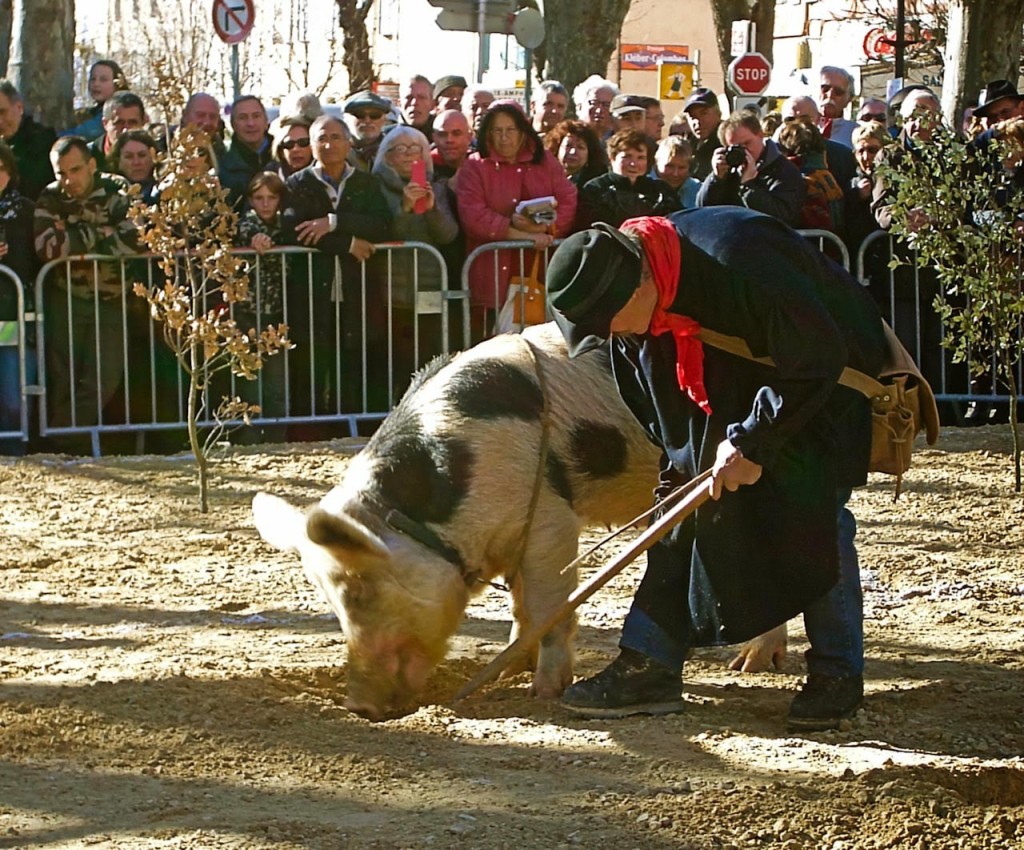 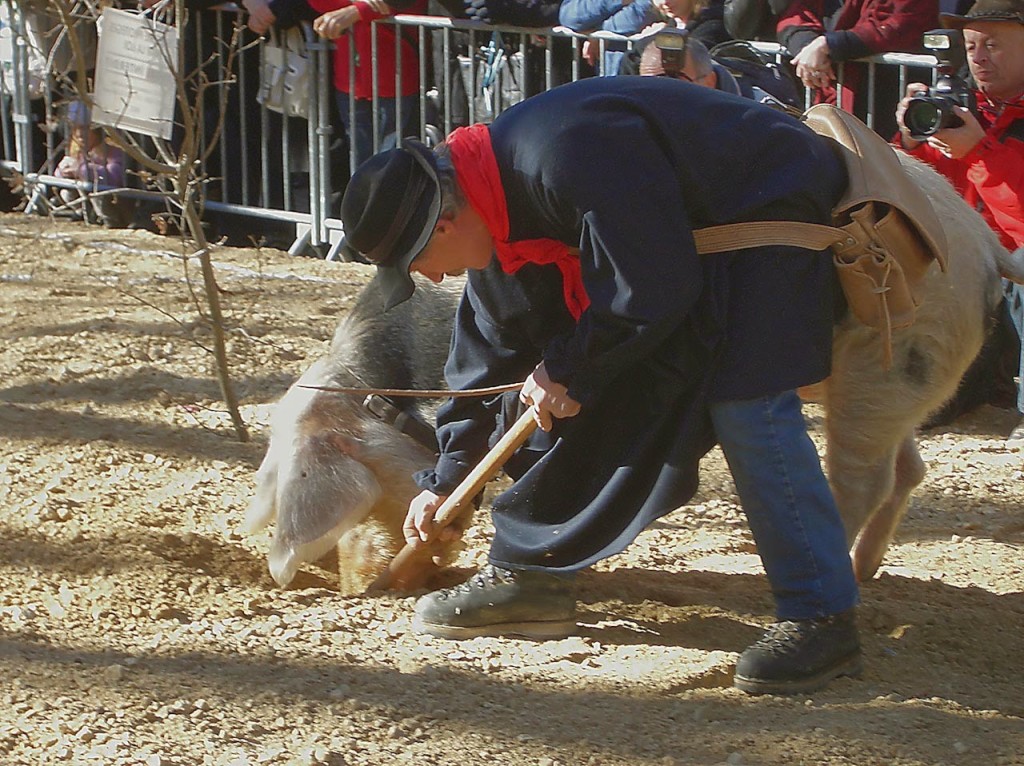 Pépette demonstrates how to root for truffles. Photos by Pamela J. O’Neill

But pigs, like their cousin boars, love truffles and it was always a battle for the human to retrieve the truffle before the pig ate it. (That’s why truffle hunters carry the big stick—to block the pig from damaging or, worse yet, devouring the truffle.) Dogs, it turned out, could be easily trained to hunt for truffles (and were a lot easier to put in the car to get to the oak forest!). The only advantage to using a pig, I once read, was that, at the end of her truffle hunting career, she could be turned into cassoulet (a heart-rending thought for someone as smitten with pigs as I am).

The introduction of dogs to the truffle hunt has encouraged more people to romp through the forests of Provence of search of black diamonds. If you are thinking of giving it a go, Pamela O’Neill who, when she moved to Cotignac had dreams of her toy poodle D’Agneau bringing truffles home, collected some advice from truffle hunters at the Aups festival. 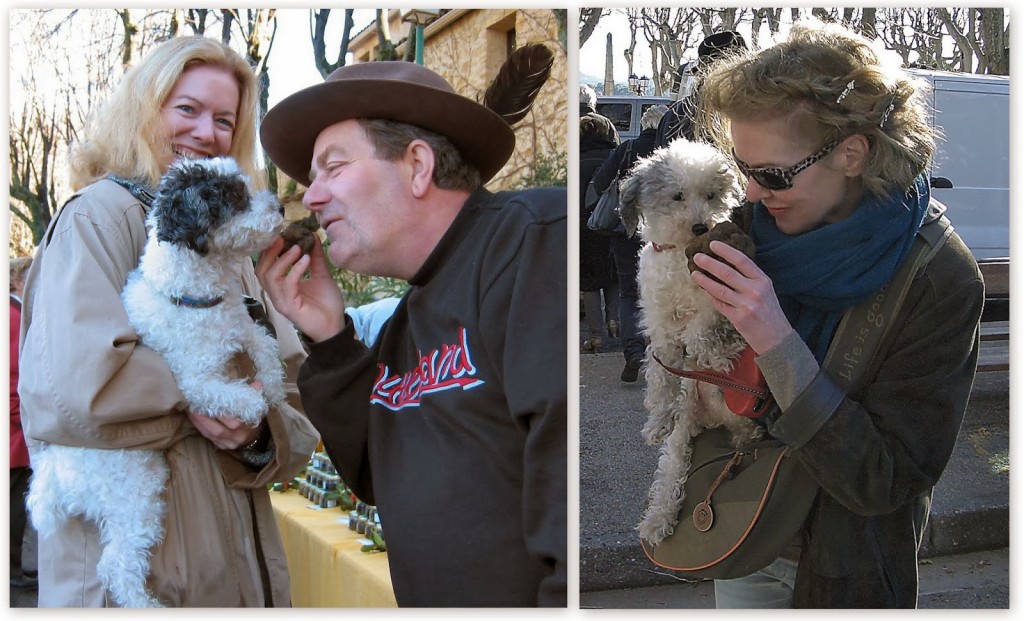 Pamela O’Neill introduces her dog D’Agneau to truffles in Lourmarin (2002) and again in Aups (2014)
Photos by S. Manfull and Pamela J. O’Neill

“There’s no real agreement,” about what to do early on, she said. “Some people said to rub the mother dog’s nipples with truffle and others said to play with the puppies with a truffle in a sock.”

Everyone agreed that the best candidates are “affectionate dogs that love to be rewarded and to please their owner.”

“Start with burying a piece of cheese such as gruyere,” she was told. “Then, use a cheese with a truffle scent and when the dog finds it, reward him with a piece of salami,” she continued. “Then hide cheese and truffle, and, finally, just a truffle, always taking away the cheese or truffle and rewarding the dog with the salami.” 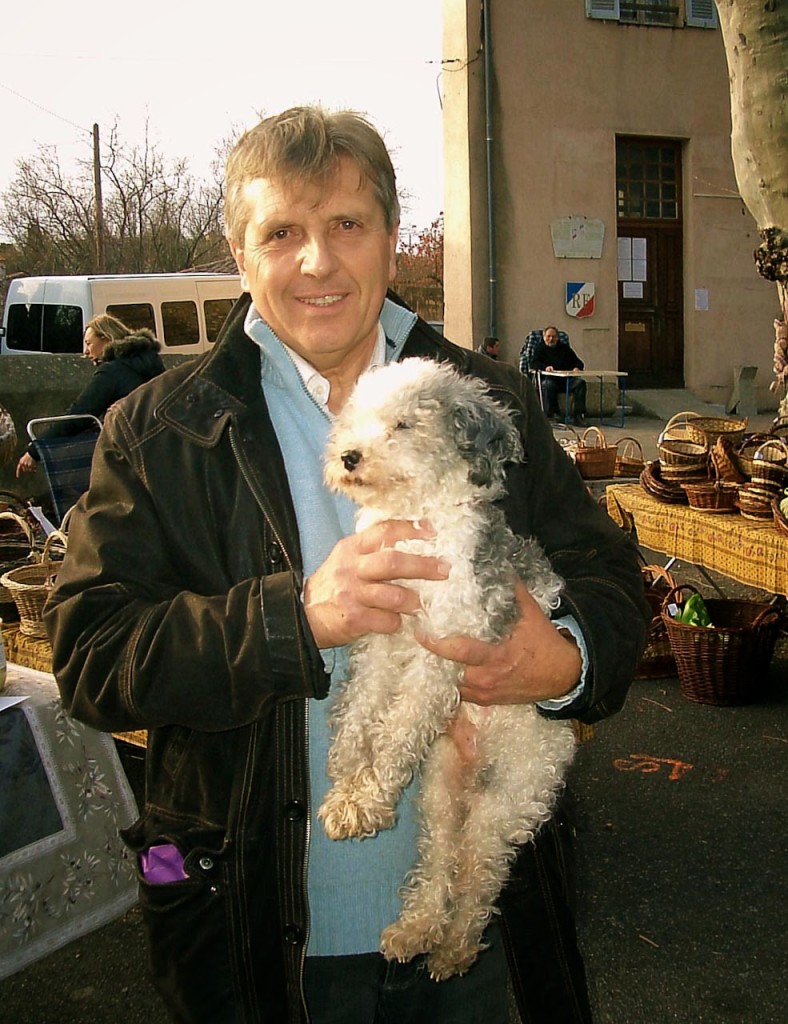 A good chien truffier can command a price of €2000 to €3000 (or can bring home a lot of truffles). If you start now, maybe you and your chien can compete in the Concours de Chiens Truffiers next year. 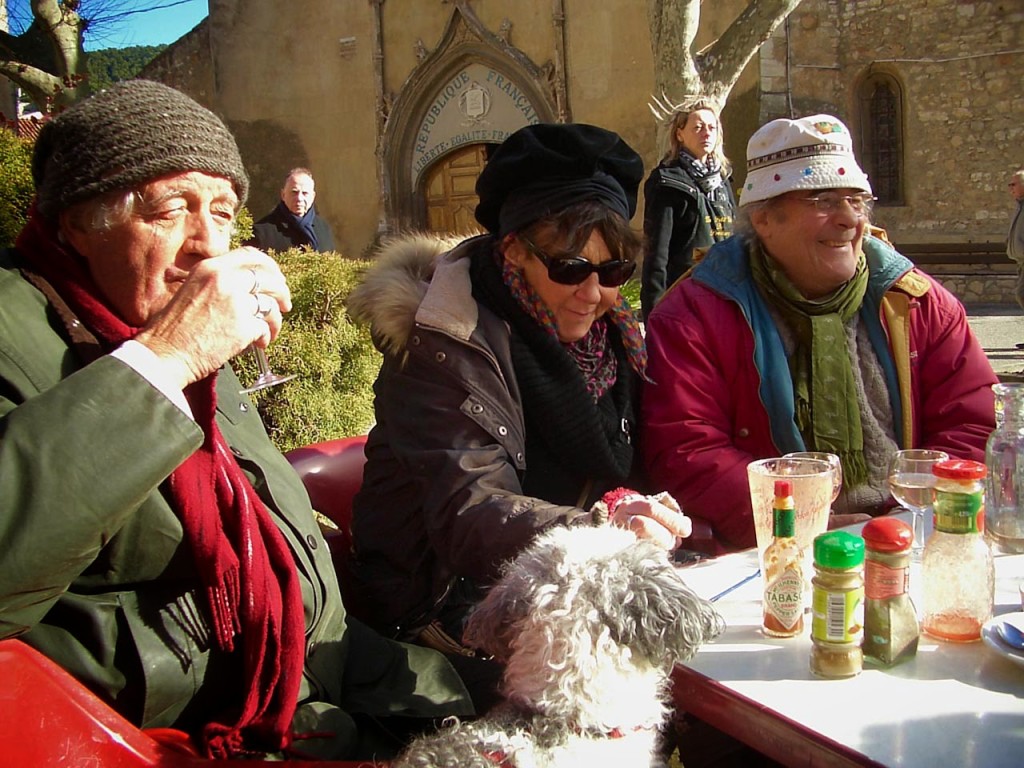 For those of us who love truffles, a day of black truffles stimulates the palate as well as a lot of conversation. O’Neill’s table multiplied as more and more friends from surrounding villages happened to pass by and decided to join the conversation.

“Can truffles be frozen?” asked one person. “Yes,” argued another, “brush them clean, don’t use water, and wrap in aluminum foil.” “But, making truffle butter and freezing that is a better way to maximize taste,” said Geoffrey Luff of Cotignac. 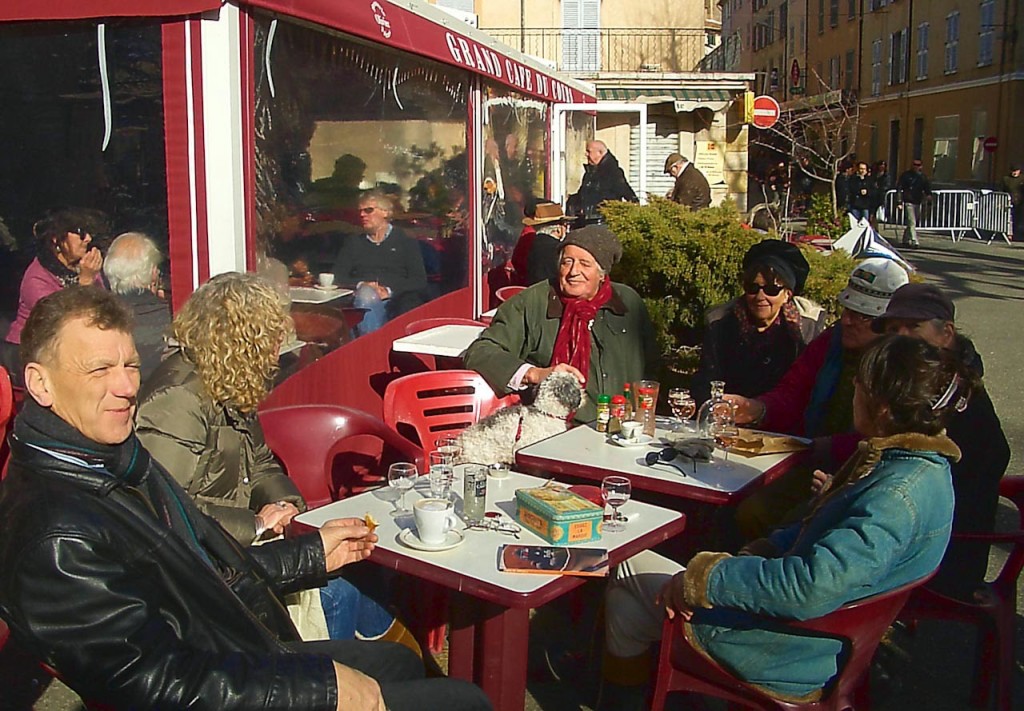 “Did you know that Bruno [chef and proprietor of Lorgue’s famous Chez Bruno] prefers to use tuber brumale for his baked Camembert ?” According to this fan of Chez Bruno, tuber brumale grow in the Var and, although less fragrant than the beloved black truffle, they are much less expensive. (None would be sold at the Aups truffle market, though.) 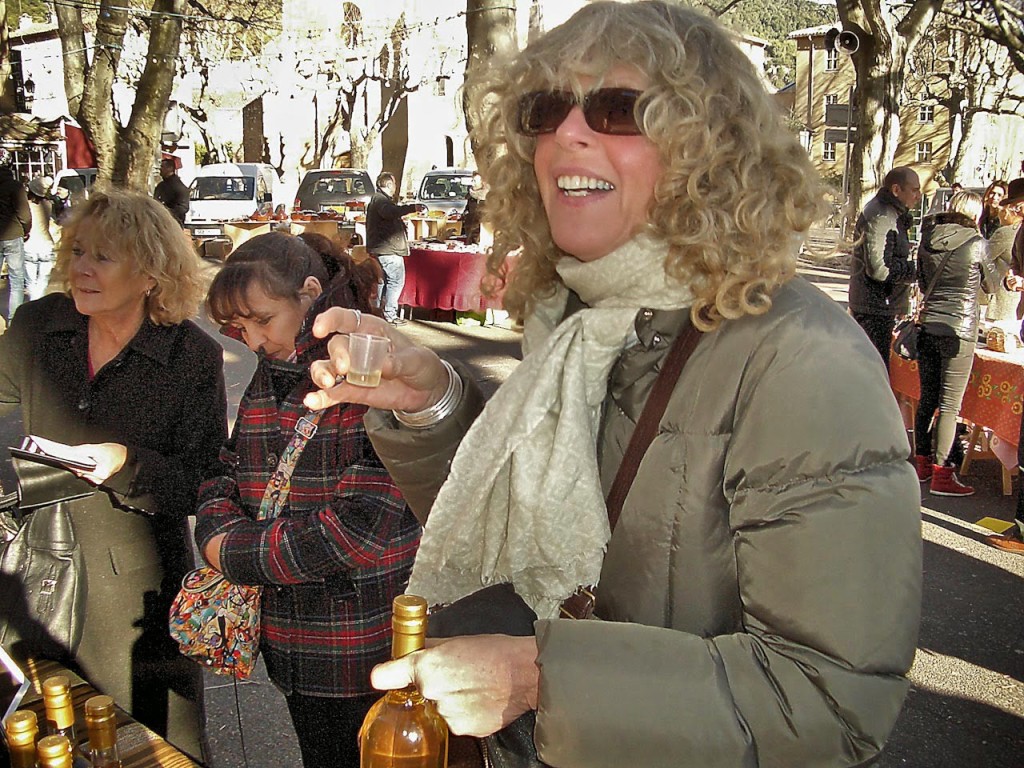 “What would you serve with the truffle Apéritif?”  “Foie gras or soft cheeses.” “In Tiramisu.” “Vraiment?”

“Have you ever heard of ‘La Poularde Demi-Deuil’?” “The half-mourning chicken?” “It’s buried in the ground for four days to two weeks, depending on the temperature, before cooking….” “I thought the ‘half-mourning’ referred to being buried in the ground in a shroud.” “Turned out that the ‘half-mourning’ refers to the effect of the thinly sliced truffles tucked under the skin of the chicken…they come to resemble a black lace veil covering the bird!”

What an interesting day! 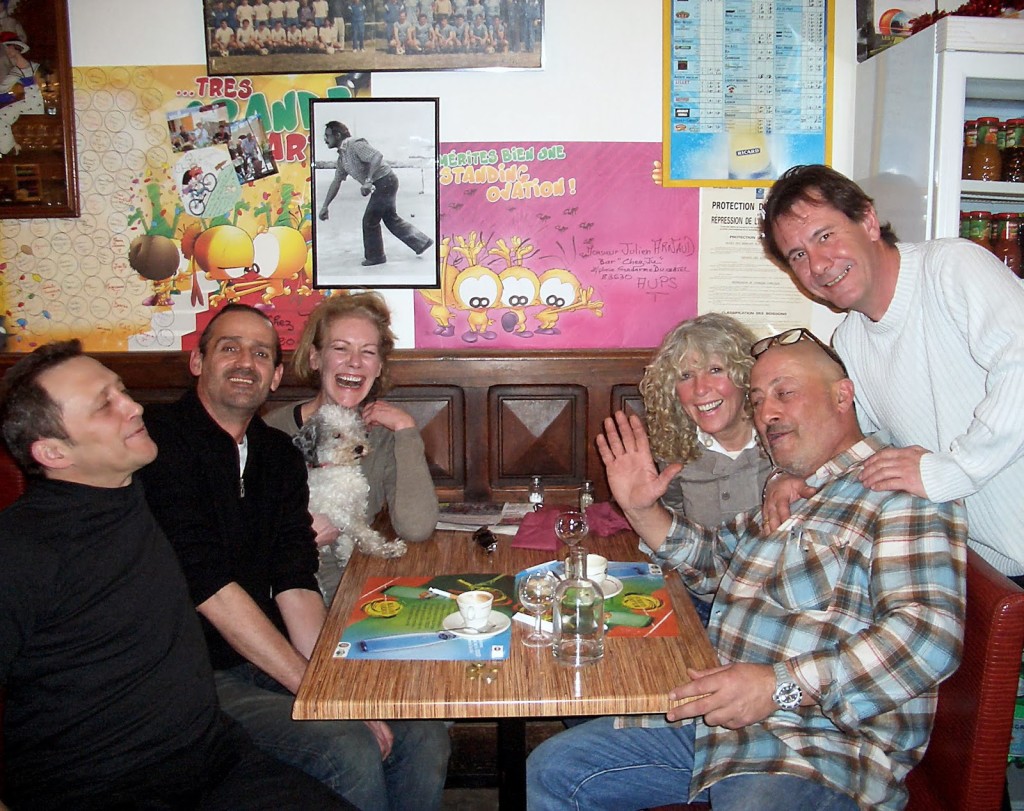