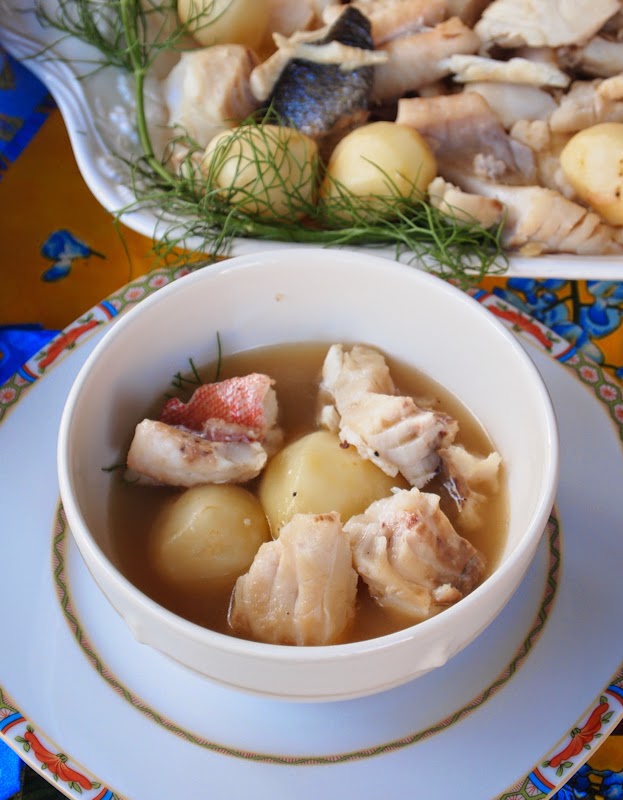 Bouillabaisse begins with a bowl of fish and potatoes topped with fish broth. Photo by W.T. Manfull

Today’s post is coordinated with my friend David’s current Cocoa & Lavender post. David and I each chose a recipe from Provence Food and Wine: The Art of Living, a new cookbook by François Millo and Viktorija Todorovska. I went with the main meal and David went with dessert, a Tarte au Citron.

“Bouillabaisse is a party,” said Viktorija Todorovska*. “It creates a party.”

Yes it does! This luscious “fish stew” may have come from humble origins–it was a “plat des pauvres,” said François Millo**. But, today, the very word is much more likely to conjure up festivity, celebration, and fun. It certainly did for our guests!

Back in March, when a blanket of snow covered all of New England and temperatures hadn’t climbed higher than freezing for weeks, I attended a rosé tasting organized by the Provence Wine Council. It was like a beacon of hope in the middle of a polar vortex (otherwise known as Boston), signaling that the warm sun would surely return to New England (and to Provence, too, where it was also pretty cold). 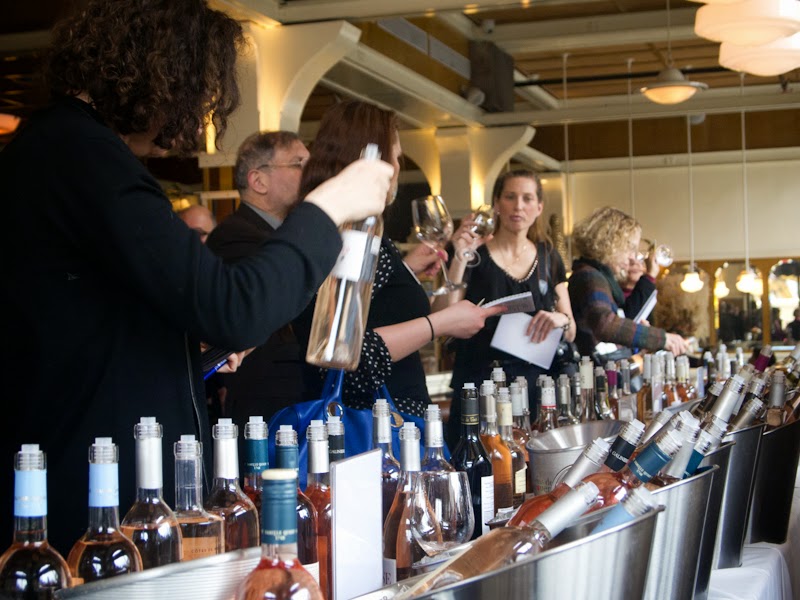 Not only did I taste wonderful wines from Provence and meet many of the winemakers, I also received a lovely new book, Provence Food and Wine:The Art of Living, and had the pleasure of meeting the authors, Millo and Todorovska.
Their book is filled with mouth-watering recipes from the heart of Provence, beautiful photographs that jump right off the page, lots of information about Provençal…
cuisine and wine, and some thoughts about how this region’s food and wine contribute to the art of living for which Provence is so famous.
My book fell open to “Bouillabaisse,” a recipe that looked so simple and delicious that I decided right there, surrounded by a veritable sea of Provence rosé, that I would make this dish just as soon as I could dig out our outdoor table to set it for the meal. That day happened recently.
What is bouillabaisse? “Fish stew” simply does not capture this wonderful meal. Some people, according to Peter Mayle in Provence: A – Z, have described it as “the reason God invented fish.” (I thought this was hyperbole until I met a few people who meant it, literally.)

The word bouillabaisse itself stems from its simple beginnings. Fishermen, upon returning to their ports along the Mediterranean Sea, would make their suppers out of the leftover fish–that is, whatever they couldn’t sell. Into a cauldron of boiling water, would go the fish, along with some garlic and whatever spices they had around. According to Millo and Todorovska, “When the liquid started to reduce, they’d cry “bouille baisse!” which, in English, means “It’s boiling down!”

Gradually, other more expensive ingredients were added, such as saffron. Today, a fish broth is usually made first–out of small fish and assorted vegetables–and the fish to be served are later cooked quickly in that hot broth. (Details to follow.) Beyond this general agreement, there is great disagreement about what exactly goes into the pot and what accompanies the fish and broth.
The recipe in Provence Food and Wine: The Art of Living comes from Millo’s family, dating back at least to his grandmother. Millo grew up along Provence’s Côte d’Azur in St. Raphael where, as a young boy, he remembers helping his mother make the soup. Today, Millo still lives in St Raphael where he now enjoys going out to sea with his son to catch the small fish for the broth (and then going to the local market for the larger fish, choosing whatever is freshest!).
While there is no consensus about what all goes in the pot, everyone agrees the fish must be fresh. (In restaurants, the fish for your bouillabaisse will be brought to your table so that you can see that their eyes are clear!)

In Millo’s family recipe, you begin by making the fish soup broth which consists of the small whole fish, olive oil to sauté onion, fennel, bay leaf, tomatoes, garlic, saffron, and, at the very end, just a little bit of pastis is added. Some recipes call for leeks instead of onions and maybe a little parsley and cumin.

Once the broth is made, the bouillabaisse itself is made.  This recipe calls for four pounds of fish, small potatoes, garlic, saffron and, of course, salt and pepper. (Other recipes say no potatoes and some say to add white wine. Some say to add shell fish and others say no.)

What kind of fish? The freshest, naturally! A vrai bouillabaisse is, by definition, made only from fish from the Mediterranean. Rascasse (part of the Scorpaenidae family) is “the backbone of Marseille bouillabaisse,” according to Millo and Todorovska. But we are not all fortunate enough to live in Provence.
“This is where ‘cooking is an art’ comes in,” Todorovsky told me. The recipe lists eight different fish  (that are similar to those in the Mediterranean) and suggests you consult your local fishmonger (if you are lucky enough to have one).
“Try to find a variety of fish and to include both fatty and lean fish,” Todorovsky advises, “and go with the freshest!” 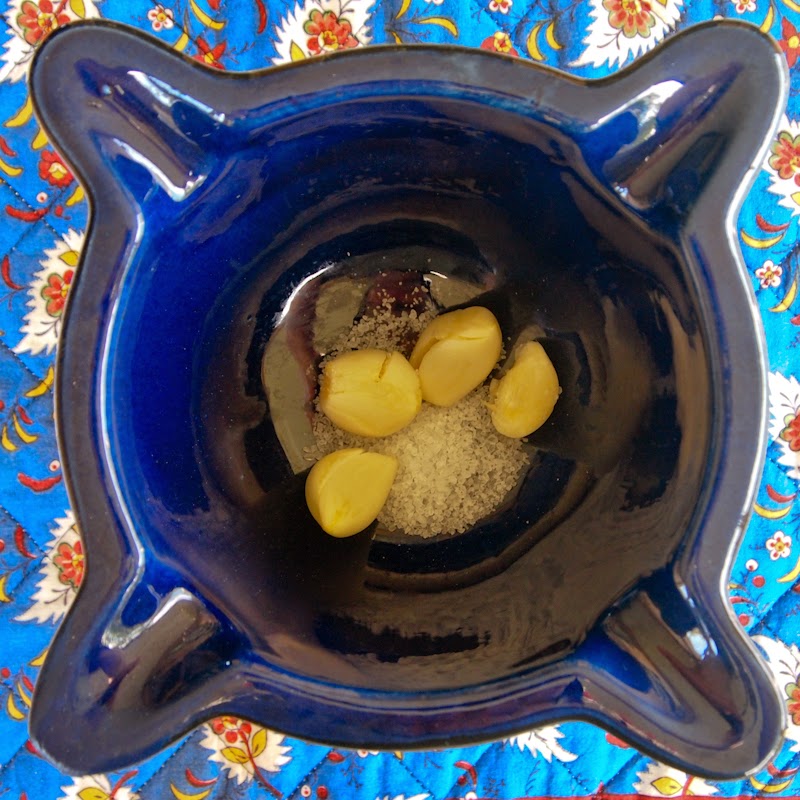 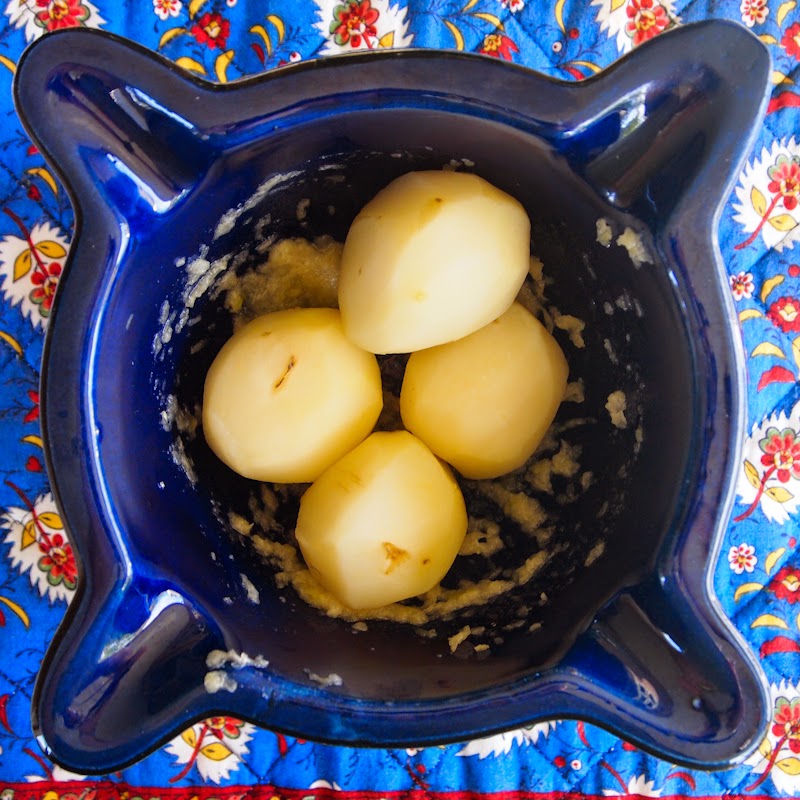 The piece de resistance is Millo’s grandmother’s recipe for the rouille, a sauce that is spread on toasted slices of baguette and served as part of the bouillabaisse. Not any old sauce, though–it is similar to aioli but with saffron added and, in the case of this true Provençal rouille, potatoes are added too (that were cooked in the broth). No egg yolks (which is the way the Parisians do it…need I say more?).
This rouille must be made by hand, using a mortar and pestle. The recipe states that it takes longer to make and is more work, but everyone who enjoyed our bouillabaisse agreed that, henceforth, we would not make rouille any other way!
Rosé, in my mind, is the only wine to accompany bouillabaisse. Todorovsky recommended a rosé from a vineyard near the sea, adding that its minerality and salinity would nicely compliment this meal from the sea.
“As they say, ‘what grows together, goes together,” Todorovsky said.
We went with a Tourbillon, a new style, organic rosé (2013) from Domaine du Gard Temps in Cotes-de-Provence. This medium-bodied, nicely balanced rosé was made under the watchful eyes of négociant Michel Tardieu and winemaker Philipp Cambie. Made from old vines–60% Cinsault, 30% Grenache, 10% Mourvedre–this wine is full of character with just the right minerality for our bouillabaisse.
Although we drink rosé throughout the year (pourquoi pas?).  During those frigid days of New England’s winter, there are few pleasures I look forward to more than the first glass of rosé under a warm sun. It reminds me of why I love the change of seasons.

Bouillabaisse was the perfect companion to our first rosé. Like Provence, enjoy it without hurry. Serve it informally and eat it leisurely. Bring everything to the table. Fill each bowl with fish and potatoes, followed by the fish broth. Tell each (uninitiated) guest to spread a healthy helping of rouille atop a toasted baguette and cover it with Gruyère cheese and then put it in your soup or just dunk and eat!

*Viktorija Todorovska, author of several Mediterranean food cookbooks, wears many hats. She is also a food and wine educator, sommelier, and U.S. Armagnac Ambassador, to mention just a few of her interesting roles. Todorovska has a Ph.D. in Rhetoric and Linguistics. She currently lives in Chicago, but hails from Macedonia where she learned about making wine early in her life–her family made their own wine and she got to stomp on the grapes! (Some kids have all the luck!)
Ratatouille is one of Todorovsky’s go-to recipes in Provence Food and Wine: The Art of Living.
**François Millo, Director of the Provence Wine Council (in French, the Counseil Interprofessionnel des Vins de Provence) is author of several books on rosé (including a comprehensive technical manual on rose, Le Rosé) and on French cuisine. In addition to wearing the aforementioned hats, Millo is an award-winning photographer–all of the photographs that grace the pages of this book were taken by Millo. Earlier in his career, Millo studied agricultural engineering and marketing and worked internationally. He also directed the Regional Union on Bordeaux Wines. Born and raised in Provence, Millo currently lives in St. Raphael.
Pissaladière and Mini Légumes Farcis (Mini Stuffed Vegetables) are two of François’s favorites in Provence Food and Wine: The Art of Living.

Provence Food and Wine: The Art of Living

can be ordered at Amazon.com