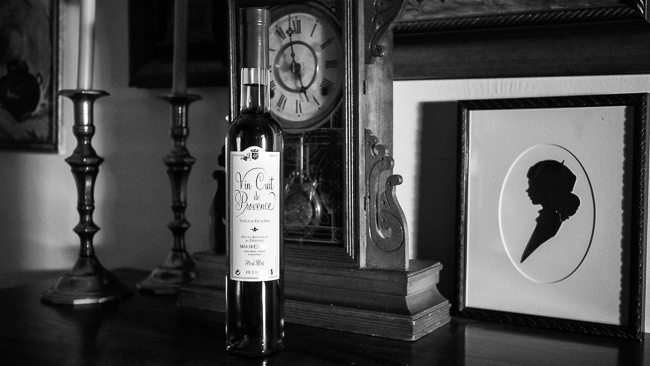 It’s that time of year again. Some people think of Christmas trees, beautifully wrapped presents tucked under the tree, and stockings by the chimney. We think of wine and food: what will we prepare, and which bottle of wine will marry best with our meal on Christmas Eve? And, of course, we have visions of vin cuit dancing in our heads.

Vin cuit is a “cooked wine” that is traditionally enjoyed during the Christmas season in Provence. Made from a blend of the juices from, for example, Rolle, Grenache, Cinsault, and Syrah grapes, this juice is cooked in a huge open cauldron over an oak fire until it is reduced by about half. It is then put into vats for a long fermentation and then into old oak barrels where it is aged for two years. (It is not fortified.) The result is an elegant dessert wine with a gorgeous, deep golden amber color; intense and complex flavors from the first wave of aromas to the lingering finish; and a silky mouthfeel.

Although most of this holiday dessert wine never makes it out of the small village in which it is made, it is made and sold to a wider audience by a handful of wine producers in Provence. You are lucky if you can find a bottle!

Our bottle of vin cuit from Mas de Cadenet has been patiently waiting since September when three of the fabulous people on our Modern Trobadors Provence Tour surprised us with a bottle of this delicious elixir. It was a serendipitous find, they told us, in a tiny wine store on one of the narrow winding streets in the Vieille Ville (Old Town) part of Aix-en-Provence, on the north side of Cours Mirabeau

The back story is that these three people had been on previous Modern Trobadors Tours which, on those particular years, had included a visit to Mas de Cadenet, a lovely domain located near the base of Mont Sainte Victoire in the heart of the Var department in Provence. On one of those visits, Matthieu Négrel, seventh-generation winemaker and co-proprietor of this 200+ year-old estate, told us that they were bottling the vin cuit. Would we like a taste, he wondered.

Like most people who try vin cuit, they were enticed by the wafting aromas and captivated by the uniquely pleasant taste.  As I remember, each person bought at least one bottle.  When Christmas rolled around later that year, they each shared their bottle with friends and family and, later, shared their stories with us about introducing this Provençal specialty to those around their holiday table. (My husband and I already knew and loved vin cuit, having met it years earlier in Provence and then again in New York City when we tasted the coveted Mas de Cadenet version.)

Fast forward to September 2019 when these three travelers returned to Provence on our tour:  they were disappointed to learn that Mas de Cadenet was not on the itinerary. We, thinking that our return visitors would want to visit different estates from those they had been to on earlier trips, had not included Mas de Cadenet on the schedule (even though it is also one of our favorite stops…for the vin cuit, certainly, but also for the other excellent wines they produce, in all three colors). 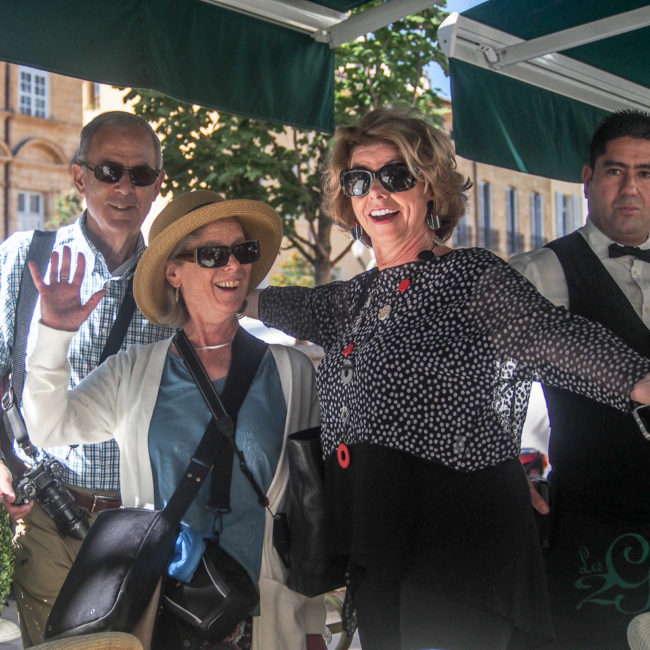 Michael Sterling, Paula Sonnino, and Virginia Holden express their delight while a waiter from Les Deux Garçons looks on. Photo by WT Manfull

So, you can imagine their delight when, on our excursion in Aix-en-Provence, they spotted the distinctive vin cuit bottle in a small wine store as they made their way from the marché aux fleurs to Les Deux Garçons where they were meeting us for a mid-morning café. And, perhaps, you can imagine our delight — and surprise — when they gave us this gift.

Now, as it nears Christmas Eve and we begin to count our many blessings, we do hark back to important questions of wine and food: which dessert shall we serve the vin cuit with? There are at least 13 desserts from which to seek inspiration!  Should you secure a bottle of vin cuit from Gary’s Wine and Marketplace, I have reposted an earlier article with more detail about the history of vin cuit.  À votre santé!

PROVENCE’S VIN CUIT: WINE COOKED IN A CAULDRON, AGED IN OLD OAK, AND STEEPED IN TRADITION 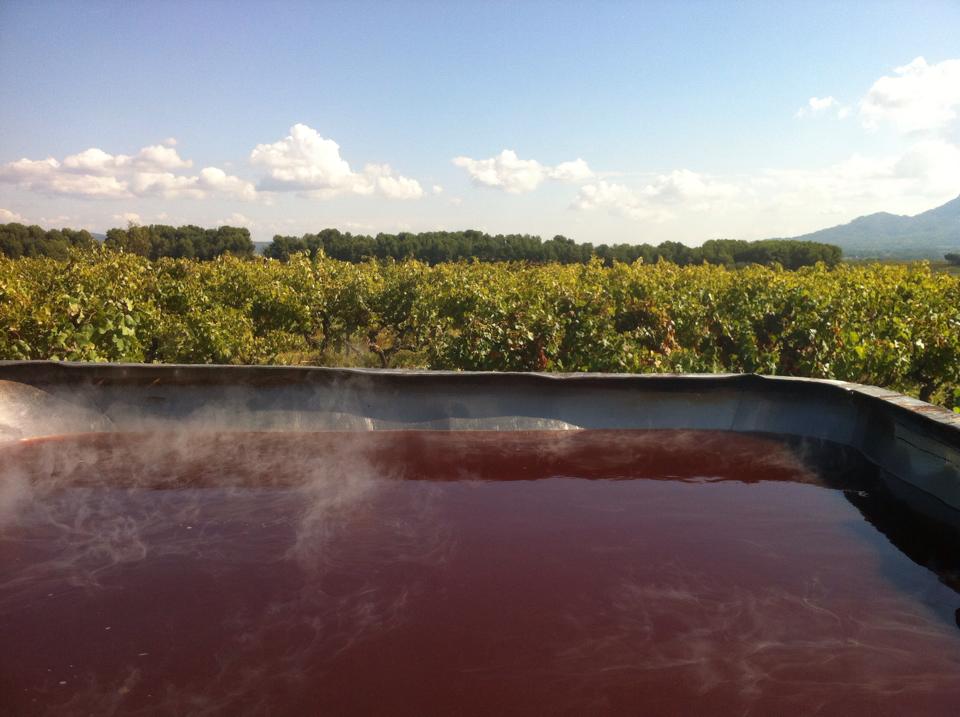 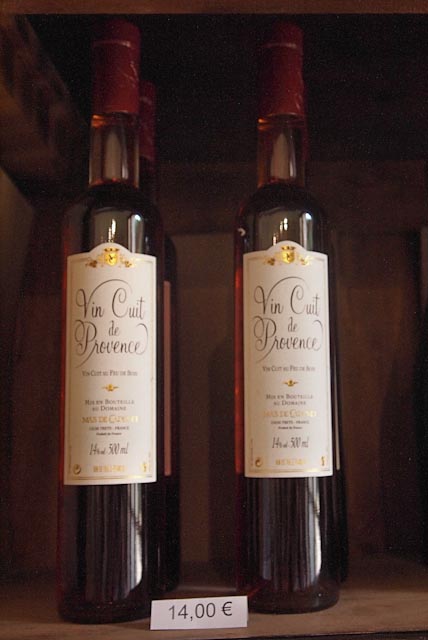 I am thrilled that this vin cuit de Provence from Mas de Cadenet is available for the first time in the United States. It just arrived in New York in early December-–in time for Christmas, as it is an integral part of the old Provençal Christmas traditions but it is a wonderful addition to any dinner this winter. (I suppose it would work well on a chilly early spring day but don’t count on having any left by then!) 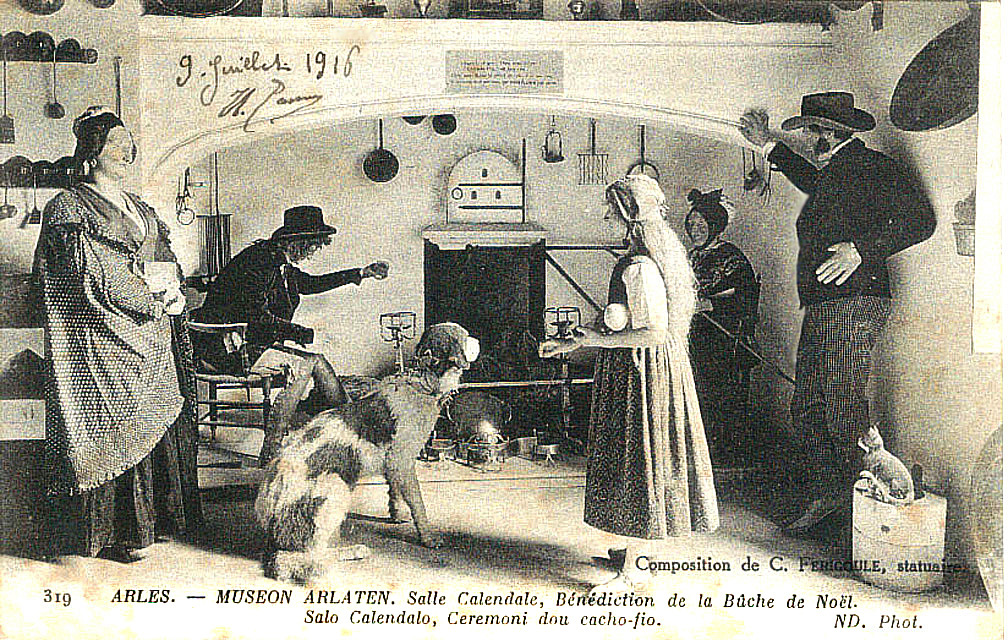 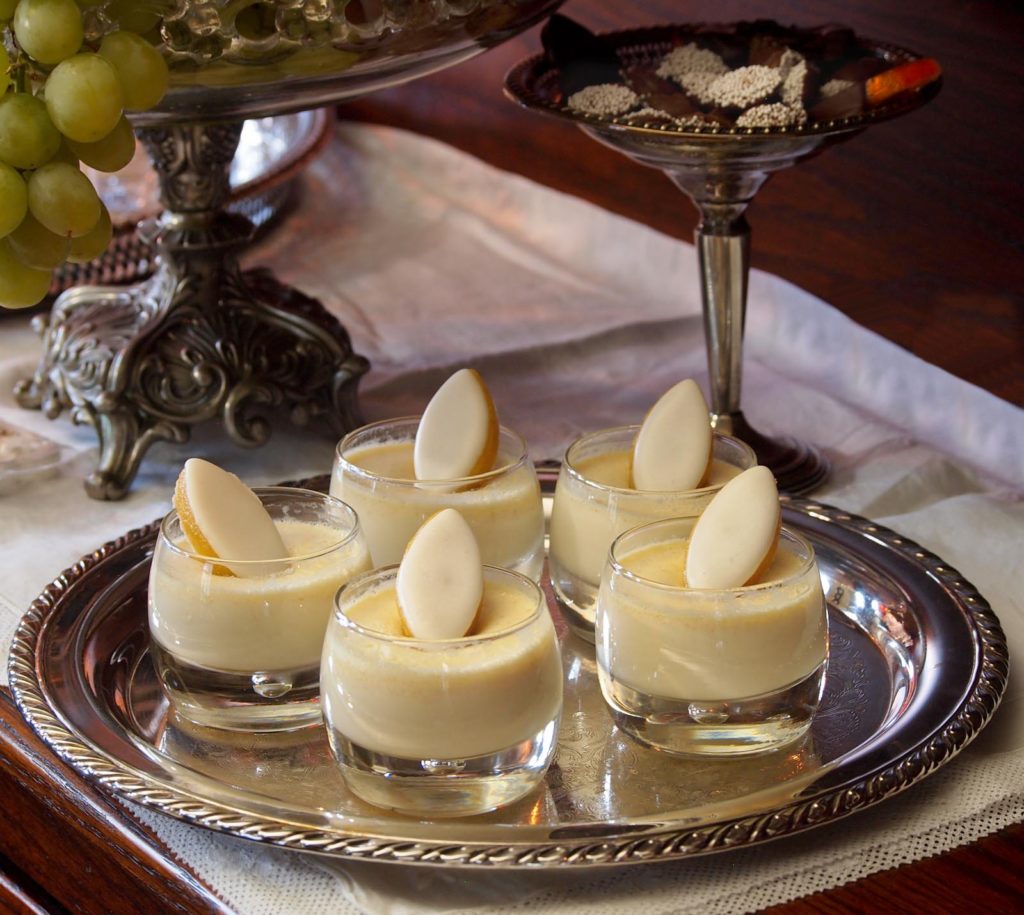 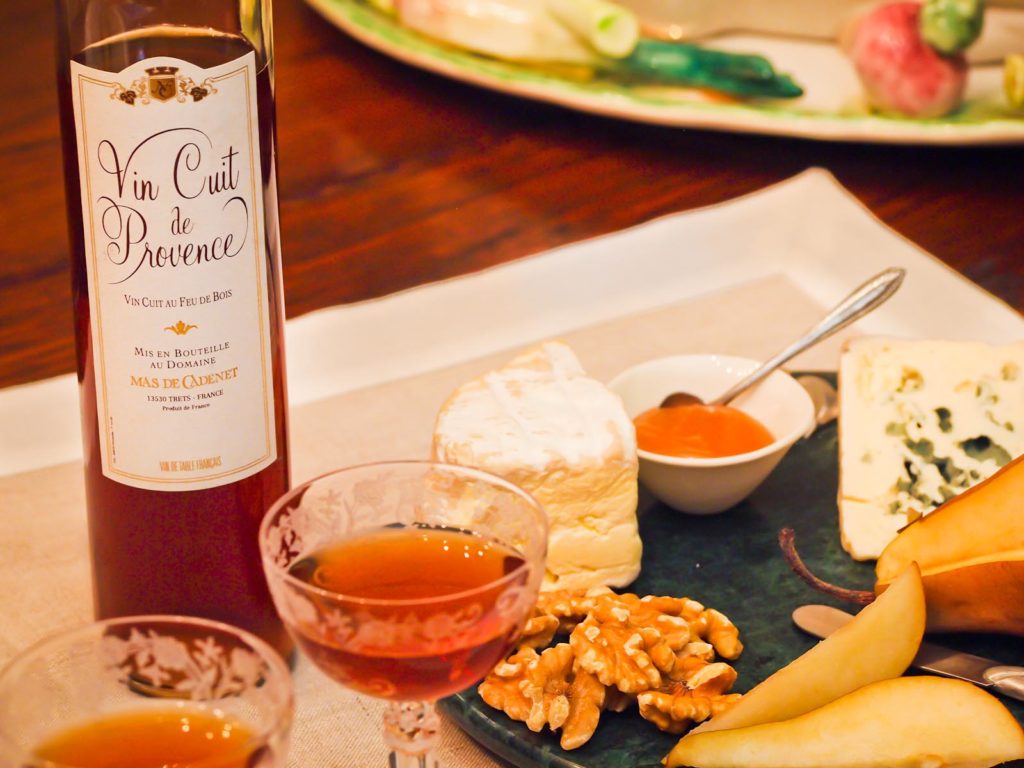 Notes:
If you would like to purchase a bottle, try Garys Wine in New Jersey who, apparently, will ship to other states (where permitted). It is a fairly new item for stateside marketing, so the list of retailers is just developing. The retail price at Gary’s is $34.99,  but it is currently on sale for $26.99! It is also expected to be available in some restaurants in New York City.  It’s worth your effort to track some down. Serve at 57° F (14° C).