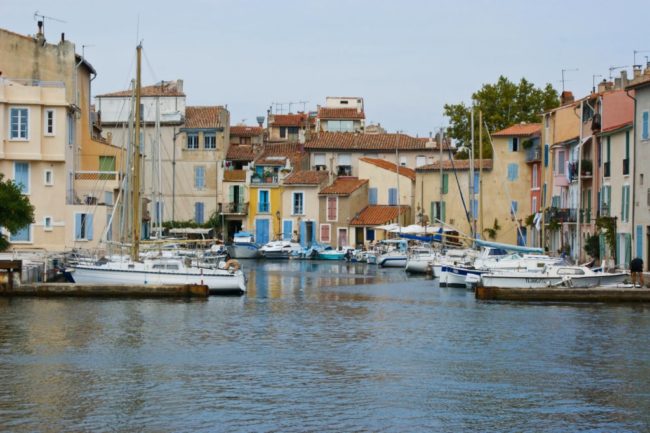 Martigues was a magnet for painters in the 19th- and early 20th-century. Painters from the schools of French Romanticism, Barbizon, and even Fauvism were drawn to the charm of this picturesque port and its luminous colors. Today, the “Venice of Provence,” still lovely and luminous and now also known for its flowers and gardens, may capture your heart, too. It is off the beaten path of the typical tourist, but well worth a stop if you are in the area. 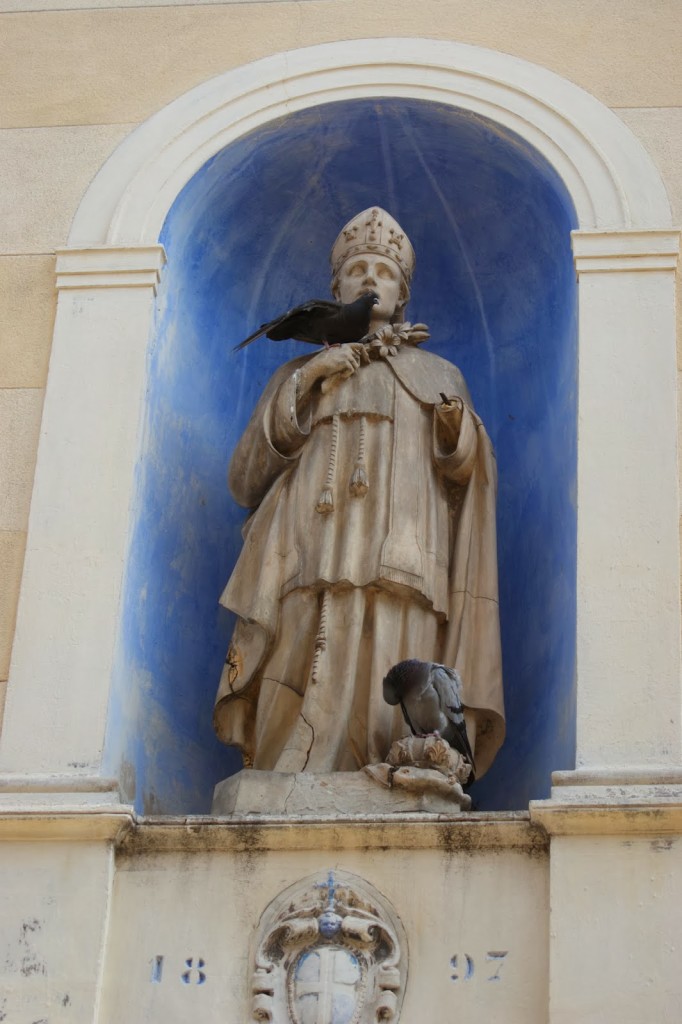 Located just 21 kilometers (15 miles) from Marseilles-Provence Airport in Marignane, we were in the area one August day after dropping our daughter off for a mid-morning flight. So, we decided to go see where Eugéne Delacroix, Jean-Baptiste-Camille Corot, Pierre-Auguste Renoir, Félix Ziem and, especially, Raoul Dufy hung out to create their now famous paintings, inspiring other painters to come and set up their easels in Martigues, too. 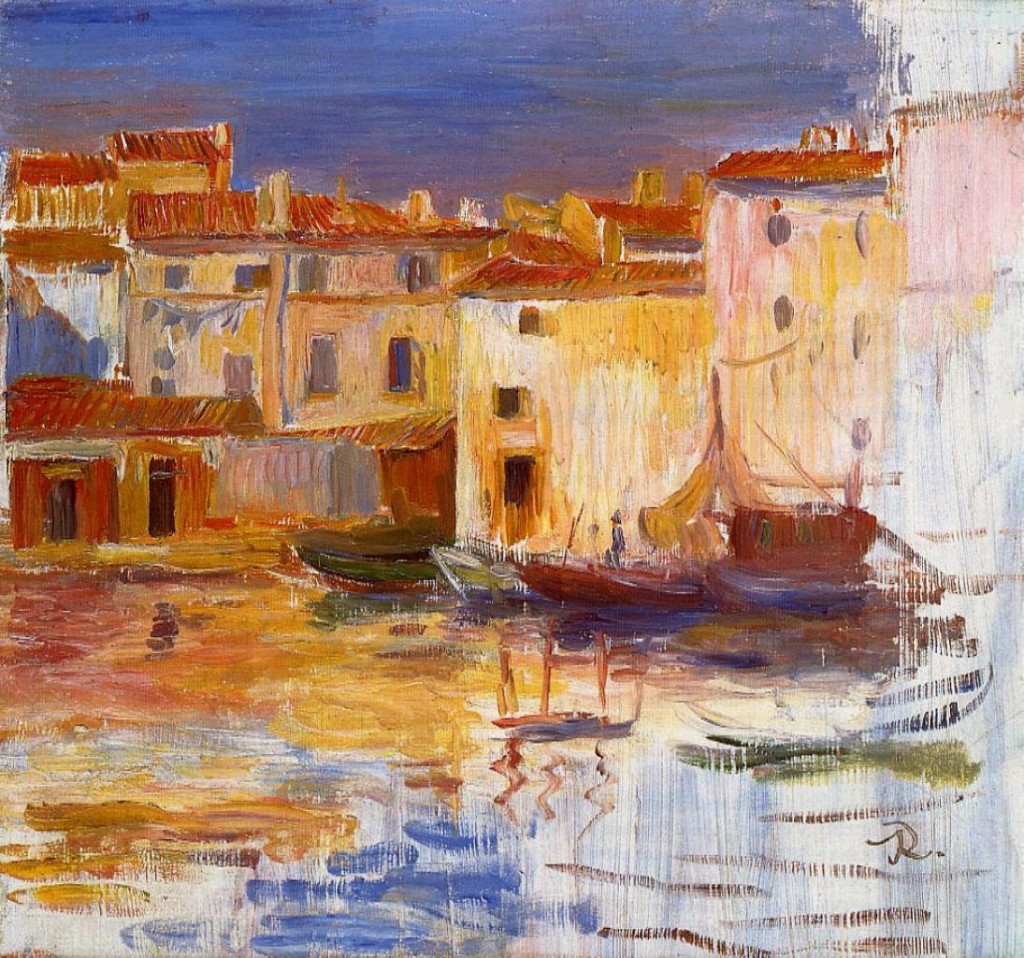 The Port of Martigues by Pierre-Auguste Renoir 1888

Martigues is located on the southwest banks of the Étang de Berre* where the Channel de Caronte connects the Étang with the Golfe de Fos and the Mediterranean Sea. 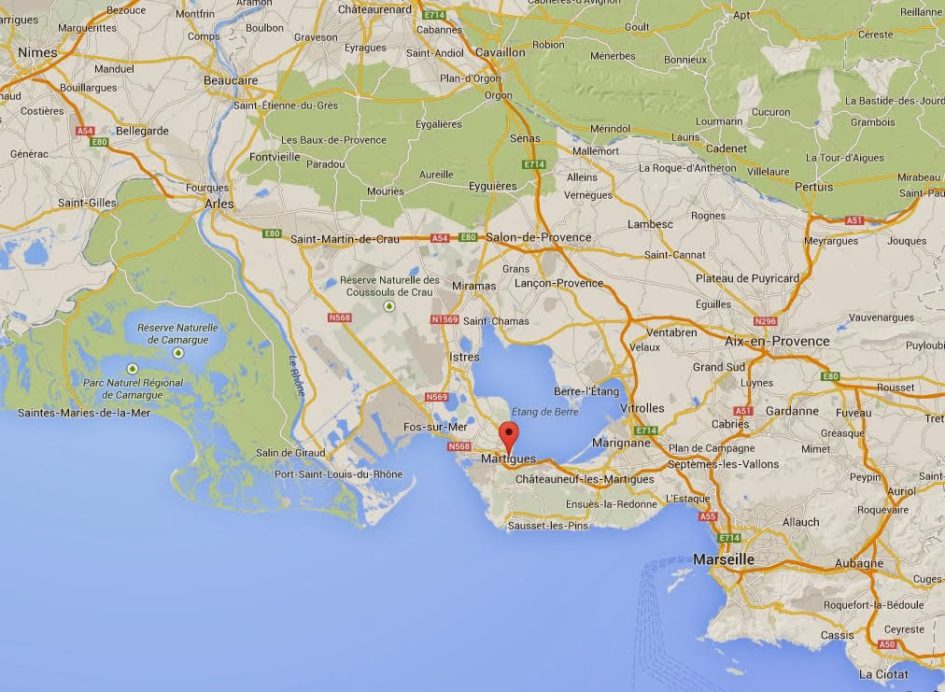 Martigues is located 21 km west of Marseille (click to enlarge)

Like most of this area, evidence of habitation dates back to the Neolithic era (beginning about 9500 BC) and the Romans came in around the 5th century BC. In the 16th century, Martigues was formed by joining the three…
separate villages of Ferruères, I’Ile Brescon and Jonquières; it was a strategic effort by King Henri III to preserve unity among the villages and to protect this important Mediterranean seaport against the Spanish. (As you walk around Martigues, you’ll no doubt notice that each original village has retained its own character.) 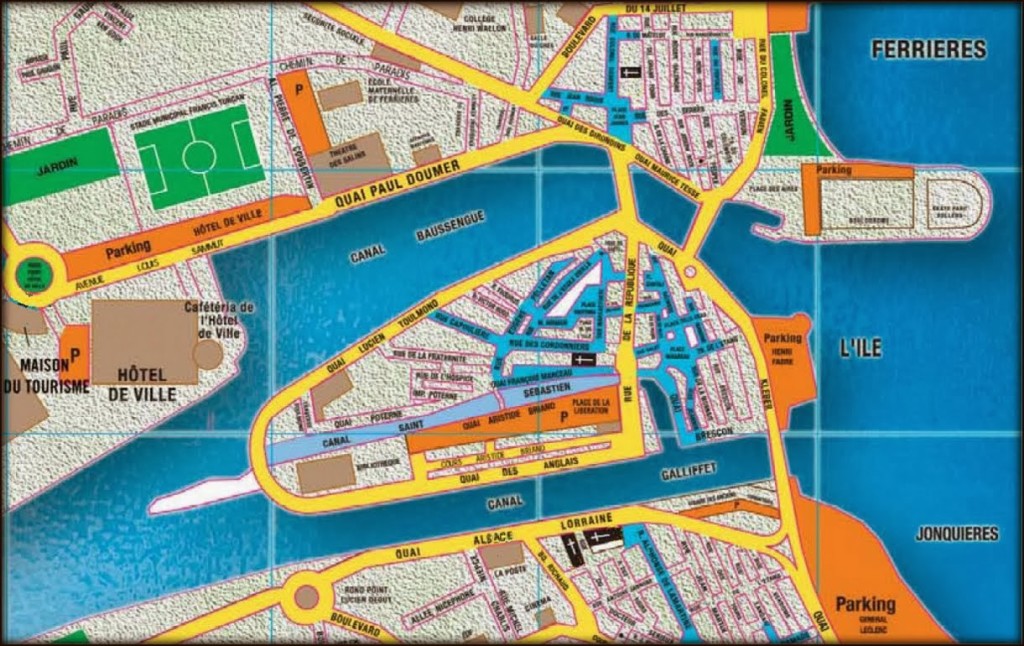 I’Ile is where you will want to spend most of your time. It has always been the most prosperous and most populous—it still is—and the beautiful houses and squares, now bedecked with pots and window boxes of perfectly arranged flowers, remain as evidence. It all seems so perfectly kept that one could have the gnawing feeling, as my husband did, that he inadvertently stepped into a movie set. 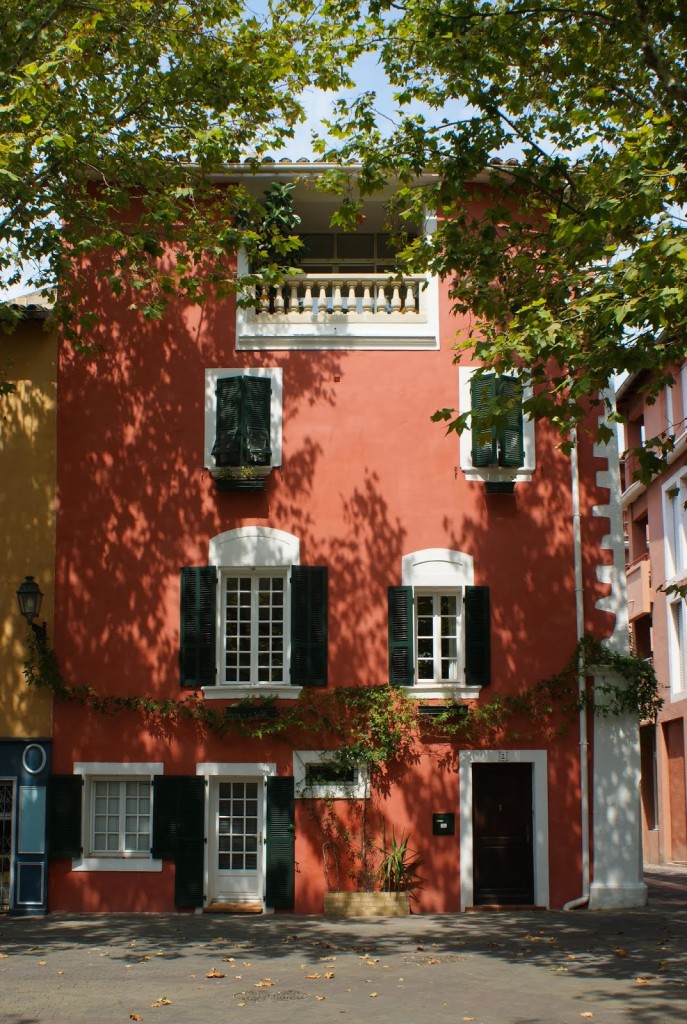 This is the “Venice” part of Martigues. Head to the Canal Saint-Sébastien which bisects two-thirds of the island on its way to the Canal Galliffet. The colorful, old homes that line the canal once housed the fishermen and their families—apparently they painted their houses with whatever colors were left over from painting their boats. 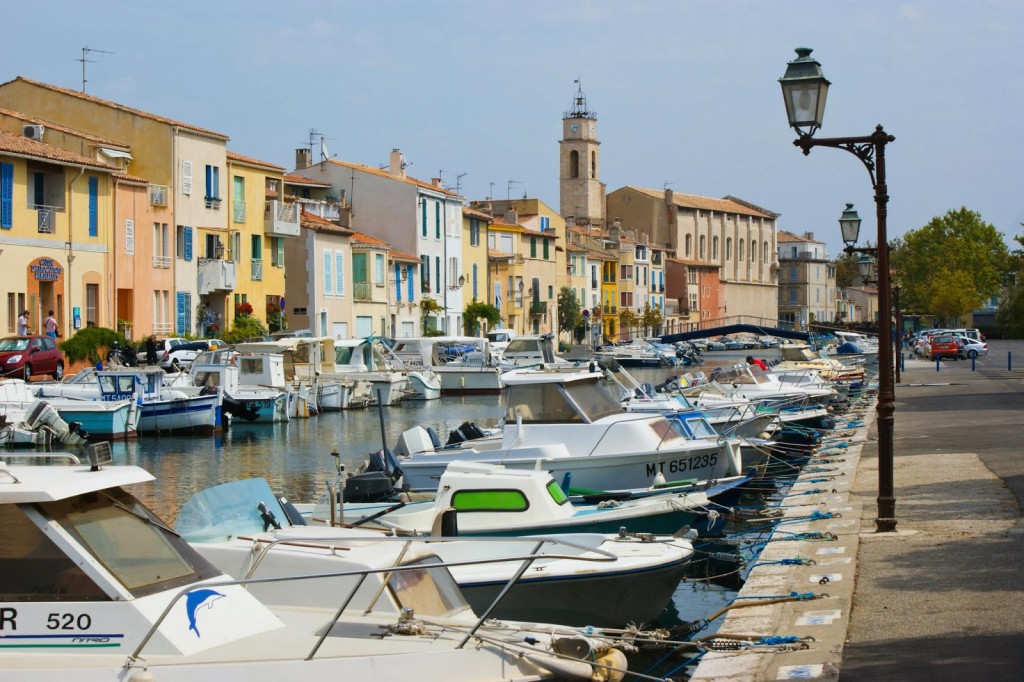 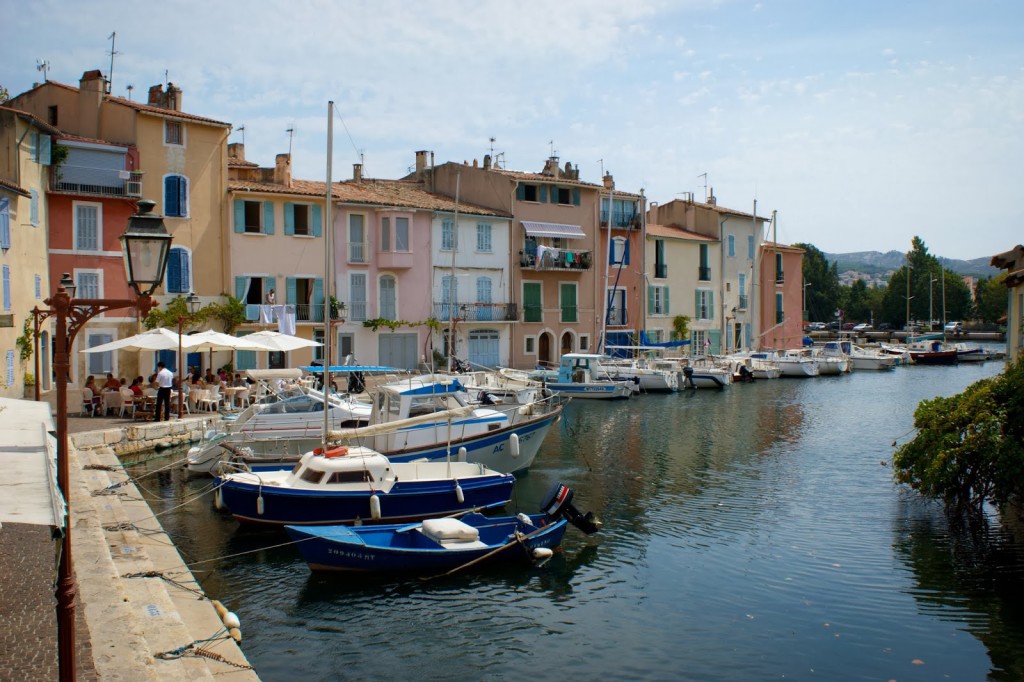 Take a stroll around this area, called the “quartier des pêcheurs” (or the quarter of fishermen), to fully appreciate the Venice moniker. Look for l’Eglise de Sainte Madeline (1670) and its beautifully carved Baroque façade and go inside to see a gorgeous interior, including an organ made in 1851 in Montpellier by Moitessier and said to be one of the most famous in Provence (although I have to confess I am not entirely sure why). 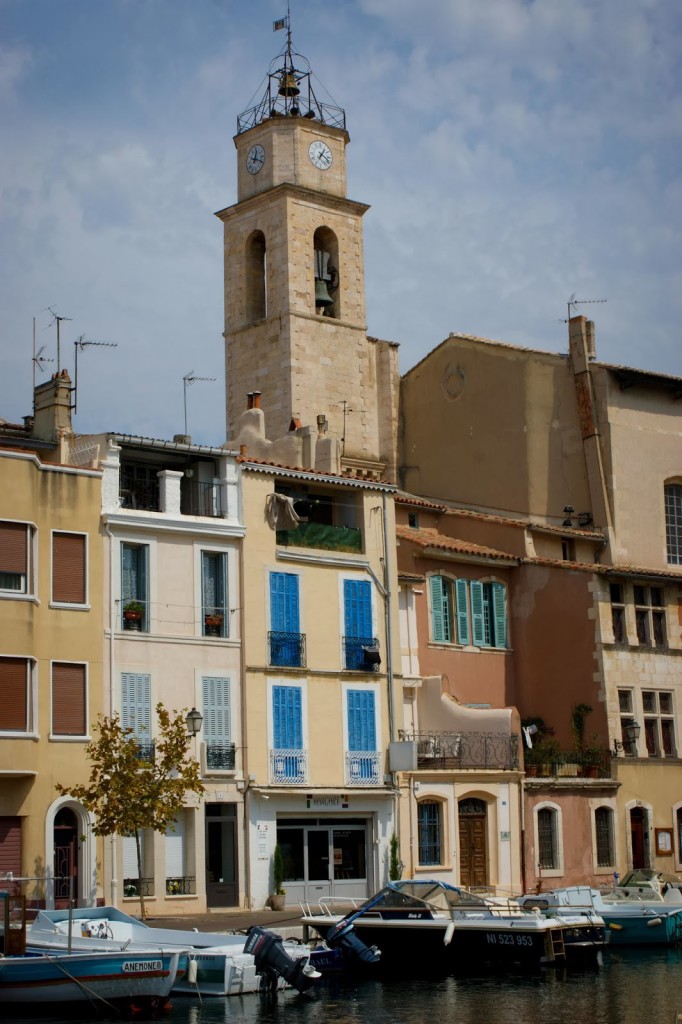 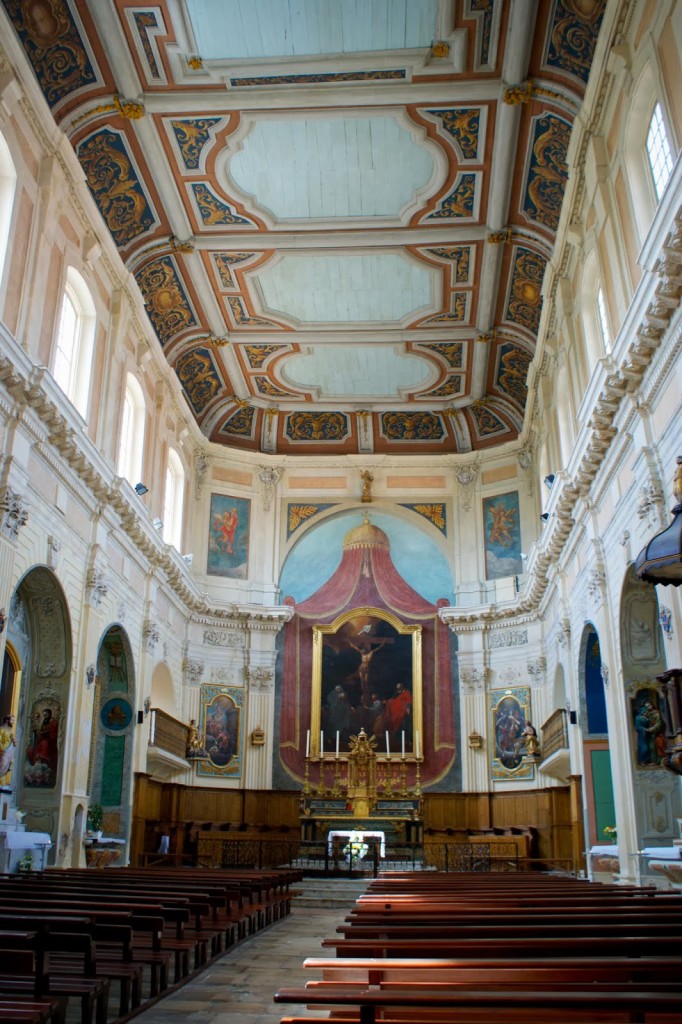 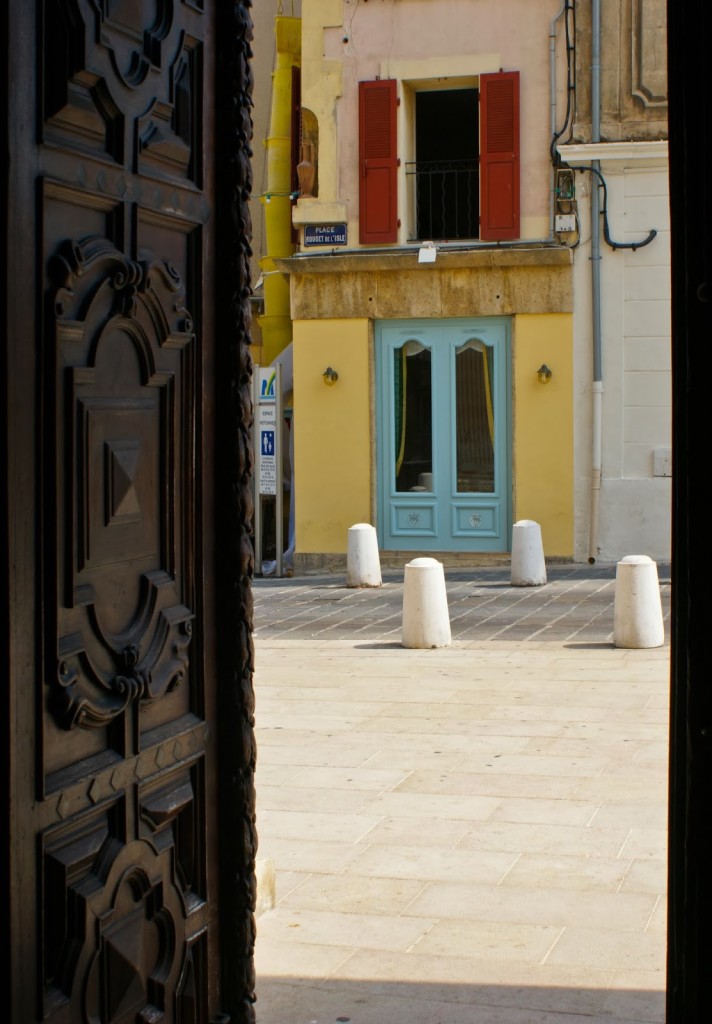 Other points of interest are a “Gallo-Roman house” that was reconstructed on its original 5th-century BC foundation; the medieval Palais Comtal (Counts’ Palace); the 18th-century Maison du Chapeau de Gendarme, a house named so because it resembles a French policeman’s hat; and the pointe San Christ, an artificial peninsula where children can enjoy the spurts of water on a hot day and adults can enjoy the view, especially of the Viaduc de Caronte. 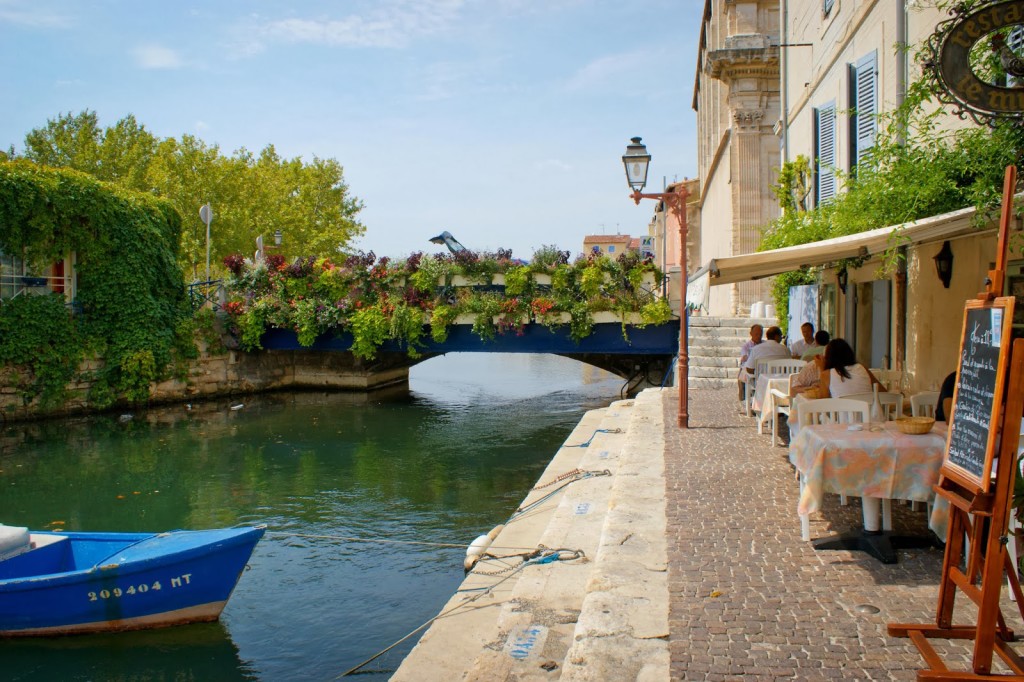 Saving the best of l’Ile—and indeed Martigues—for last, follow the Canal Saint-Sébastien toward the Canal Galliffet. Just before you reach that canal, you will find what is officially called “le quai Brenscon” but what is known by all as le Miroir aux Oiseaux . In English, this means “the bird mirror,” underscoring that the reflections are so brilliant that even the birds can see their images. 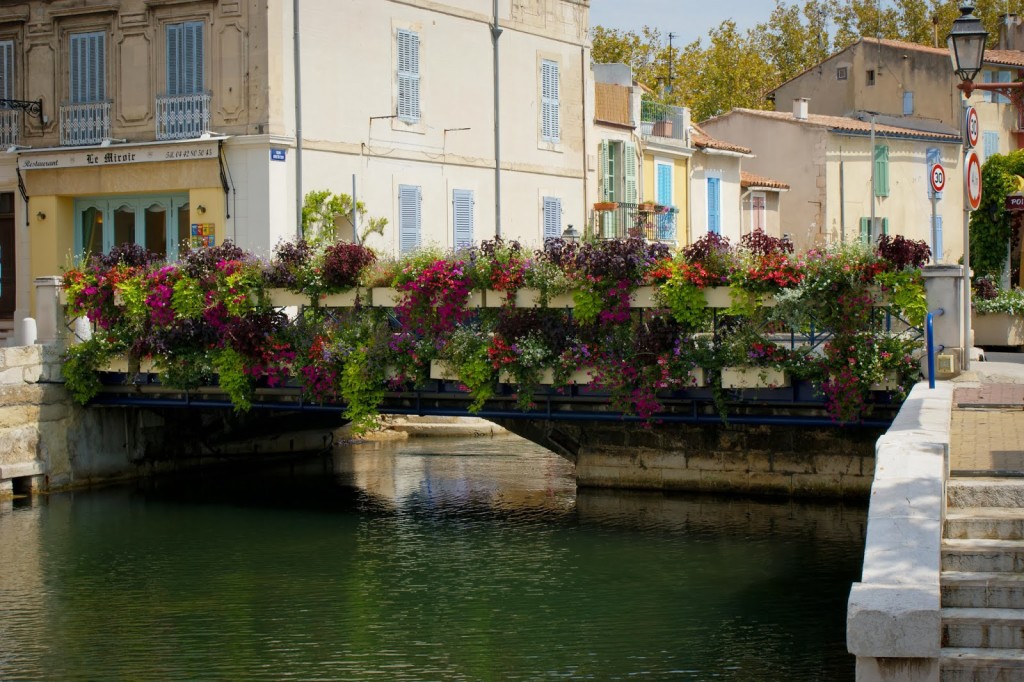 Pont Saint-Sébastien, typically adorned with a stunning array of flowers on both sides of the bridge, offers a perfect vista of this area. Although pleasure crafts have largely replaced the fishing boats, you can imagine what the painters saw over a hundred years ago. 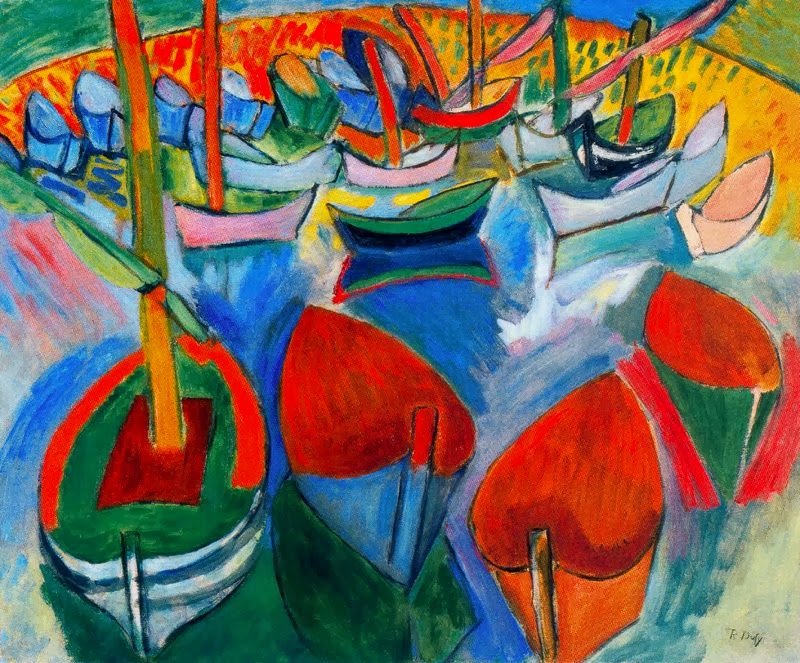 Boats at Martigues by Raoul Dufy, 1908

This area also offers a splendid view of Jonquieres, the oldest area of Martigues where a labyrinth of tiny lanes leads to restaurants, shops and, on Thursday and Sunday mornings, to markets. The Chapelle de l’Annonciade des Pénitents Blancs (1664-1671) is worth a stop—it is registered as a historic monument of France—for its very pretty Baroque interior, including trompe-l’oeils and graffiti dating back to the Revolution. It adjoins l’Eglise Saint-Géniès, built in the 17th century for the Order of Malta (but not in good shape when we saw it). 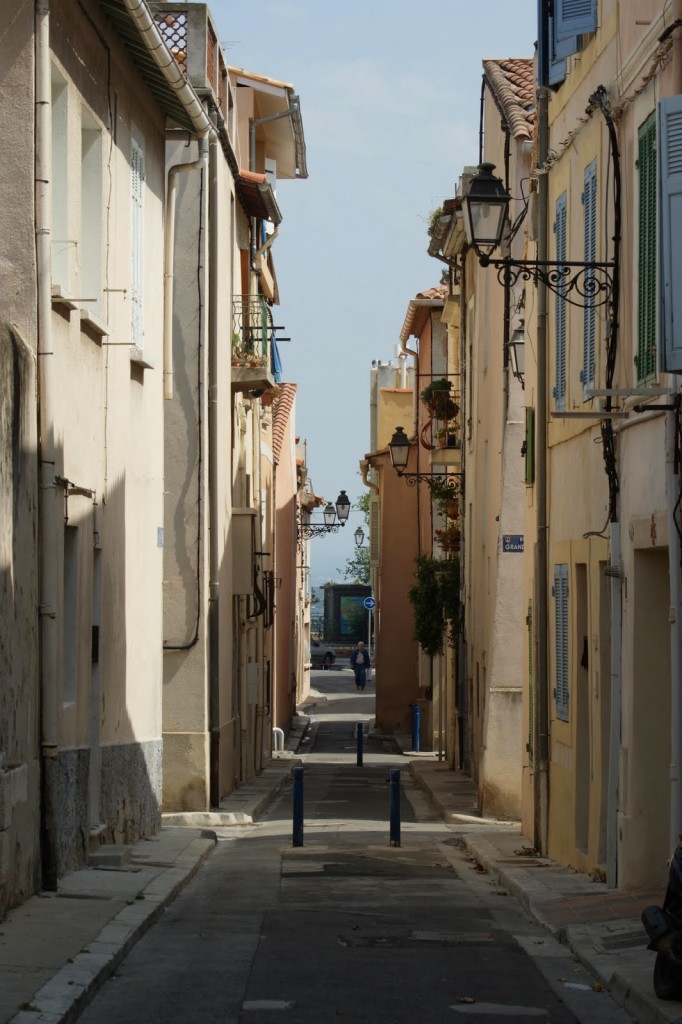 In Ferruères, you’ll find the tourist office—so some people would argue that you should have started here first—and the Musée Félix Ziem where you will find impressionist and contemporary art—including, of course, paintings by Ziem—as well as archaeological finds from the area. 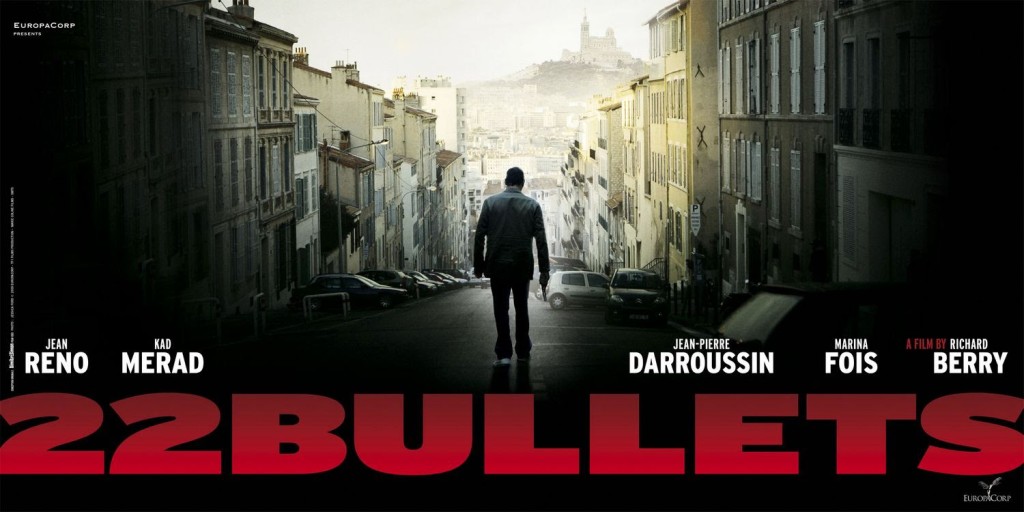 Originally entitled “L’Immortel,” this movie was filmed, in part, in Martigues (released in France in 2010 and in the US in 2013)

A relatively new addition to Ferruères is Espace Cinéma Prosper Gnidzaz, a collection of everything related to film making, including film prints of movies shot in Martigues such as Jean Renoir’s Toni , Grangier’s La Cuisine au Beurre, Robert Guédiguian’s À la Vie, à la Mort! and the very recent movie, 22 Bullets, directed by Richard Berry and starring Jean Reno. (Who knew there were so many movies made in Martigues?)
Likewise, who knew there were so many bonne addresses for lunch? We went to Martigues with thoughts that we would have lunch at Le Bouchon à la Mer or Le Miroir, but for reasons I cannot recall, our plans did not come to fruition. I had read that Le Miroir was the place for Poutargue. (That is “Bottargo” in English….Still don’t know what that is? Neither did I.) 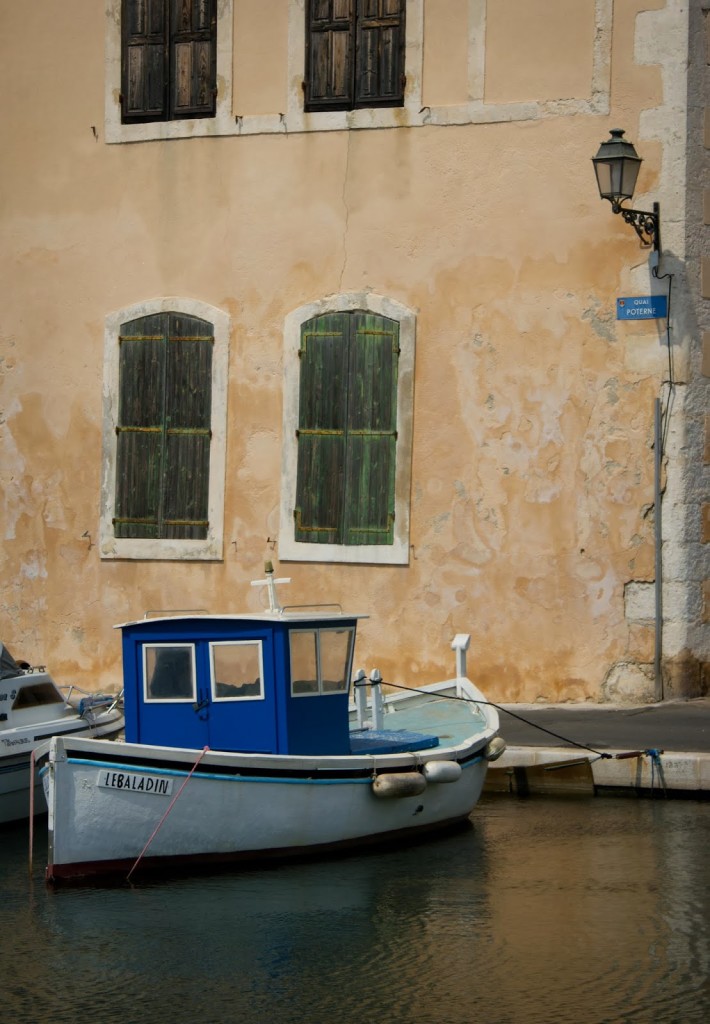 Poutargue is a Mediterranean delicacy of dried, pressed, and salted fish eggs, usually from grey mullet and sometimes from tuna or swordfish. Referred to as caviar martégal (Martigues caviar), some sort of secret preparation, passed on from generation to generation, is followed to produce what is ultimately a sausage. No, I had no intentions of ordering this specialty of the region—I was counting on my husband to do so and further counting on him to let me have a taste. He’s always up for daring culinary adventures. (In another post, I will write about his Civet de Lièvre à l’Ancienne  in a gastronomic restaurant in Paris—later that night, I was immensely relieved that I had resisted his offer of even a bite.)
We ended up in an unpretentious Chinese-Vietnamese restaurant in Jonquieres called Tien-Thanh  —the meal was authentic, fresh, and delicious and the service was excellent and very friendly. I would return in a heartbeat. Since then, friends have recommended two other restaurants: Le Station Bar  and Le Garage 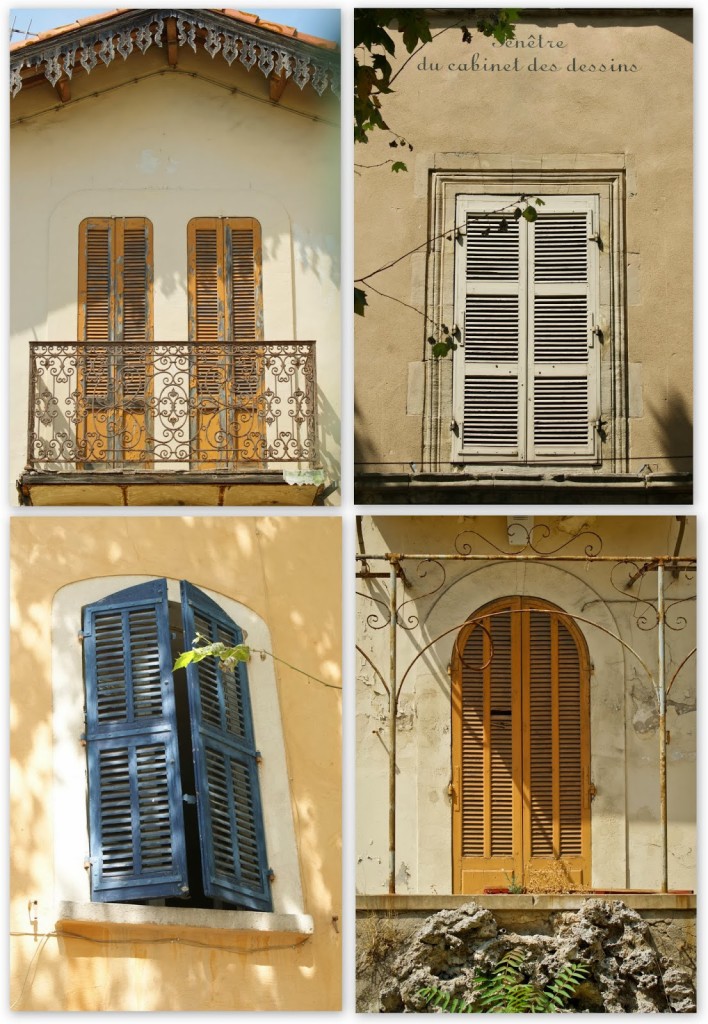 It was dusk when we left Martigues for our home base in Lourmarin. This visit had whetted my appetite to explore more of this area—the beaches and fishing ports that lie along the coast from Martigues to Marseille, collectively referred to as La Côte Bleue. L’Estaque, part of La Côte Bleue and now effectively absorbed by Marseille, was another enclave for painters of the 19th- and early 20th-century and is place I would especially like to visit. One can follow the D5 by car or board a train and enjoy the view of La Côte Bleue. Martigues hosts enticing festivals in March, June, July, and August—another reason to return. And, okay, there’s the Poutargue I didn’t get to try.
If you only have a week in Provence, I do not recommend a visit to Martigues. But, if you have a little more time and especially if you are looking for a picturesque village off the beaten tourist path—read no tour buses—Martigues is worth considering. 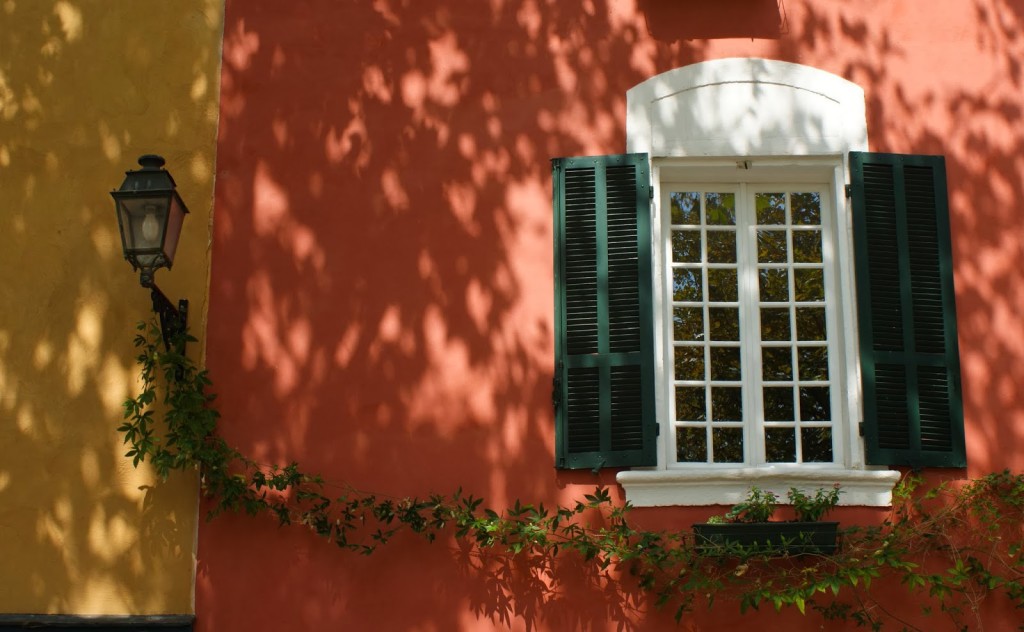 The tourist office is located in Ferruères , on rond-point de l’Hôtel de Ville, 13500 Martigues (tel +33 4 42 42 31 10  +33 4 42 42 31 10).
From Marseille-Provence Airport at Marignane, take the A7, then the A55. We found parking on the street the day we visited Martigues (in August!) but you may not be as lucky.
*In case you are curious, the word “étang” refers to a pond although English translations of “Étang de Berre” variously refer to it as pond, lake, and lagoon. I was always curious about this. My five-minute visit to the internet suggests that the discrepancy probably stems from the size and salinity content of this body of water—it is very large for a pond and it is composed of some salt water. Now you know!
Call
Send SMS
Add to Skype
You’ll need Skype CreditFree via Skype