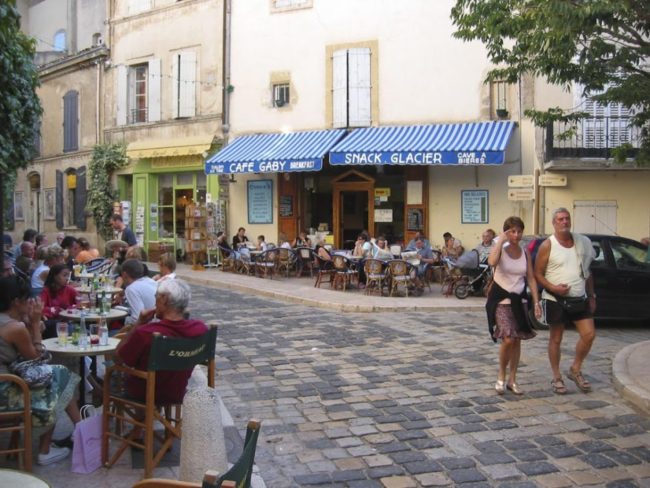 If you have been to Lourmarin, you know Café Gaby. Located in the center of the village on Place de l’Ormeau, where main street Rue Henri de Savornin meets Rue du Temple, Café Gaby is the hub of this charming Luberon village.

Men meet at the bar when the sun first rises, parents gather for coffee after dropping their children at school, vacationers come for lunch, young folks come for wifi to text, locals take their pastis as the day comes to a close, and regulars rendezvous for dinner. Deals are consummated here, real estate is sold, heated debates occasionally turn to fisticuffs, paintings capture café scenes, and chance meetings have led to friendships and even wedding bells.

On any given day, you are likely to meet Australians, Scots, Germans, Belgians, South Africans, Asians, Russians, Americans, and, of course, French.  Mostly French.  You might see the mayor of Lourmarin or British author Peter Mayle, who lived in Lourmarin until two years ago when he and his wife moved to the neighboring village of Vaugines.  When we are in town, you are very likely to find me at Gaby’s.

Every day, you are likely to see Marco Vincent, proprietor of Café Gaby, taking orders, balancing trays of café crêmes, opening umbrellas to shade patrons from the sun and closing umbrellas to protect patrons from the Mistral, moving chairs, welcoming regulars with des bises, and greeting everyone alike in a gentle, unassuming manner, “bonjour”  or “bonsoir.”

Marco usually arrives between eight and nine o’clock in the morning and rarely goes home before the village clocks strike midnight. “C’est dur,” he said, matter-of-factly. 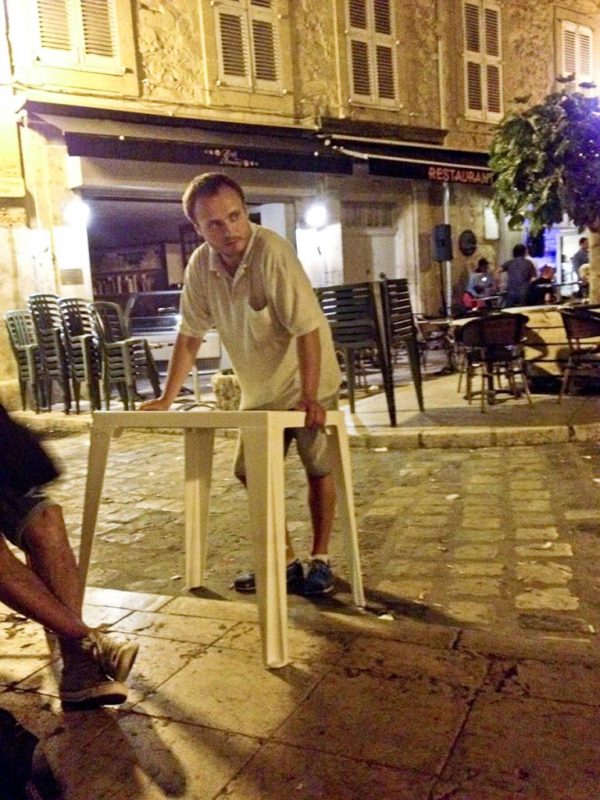 As Marco tells the story, his parents’ non sequitur response to his news was “Why don’t you work at Café Gaby?” 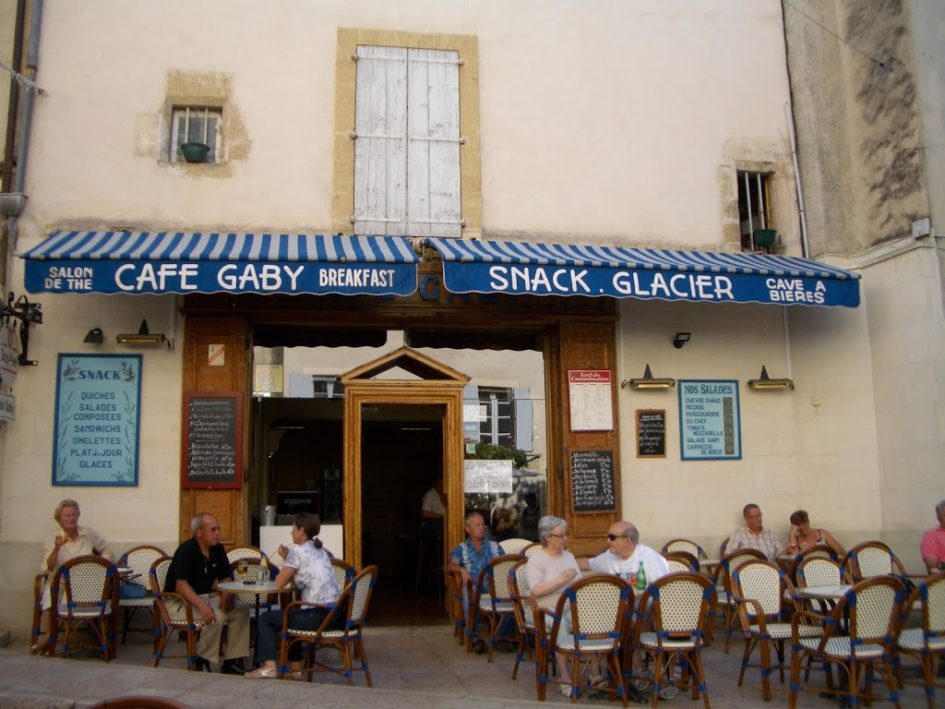 The next day, the owner of Gaby’s called Marco to further encourage him, saying he was in dire straits for the weekend because he was missing a waiter.  Marco, being the kind-hearted individual I’ve come to learn he is, agreed to work the two days while he continued to look for (affordable) airline tickets to Hawaii.

Airfares are expensive to our westernmost state, as Marco discovered, but the weekend must have been a pretty good in the summer of 2003 at Café Gaby because, by the end of the agreed-upon two days, Marco told the owner he would work for the rest of the season and called Hawaii to decline that job. 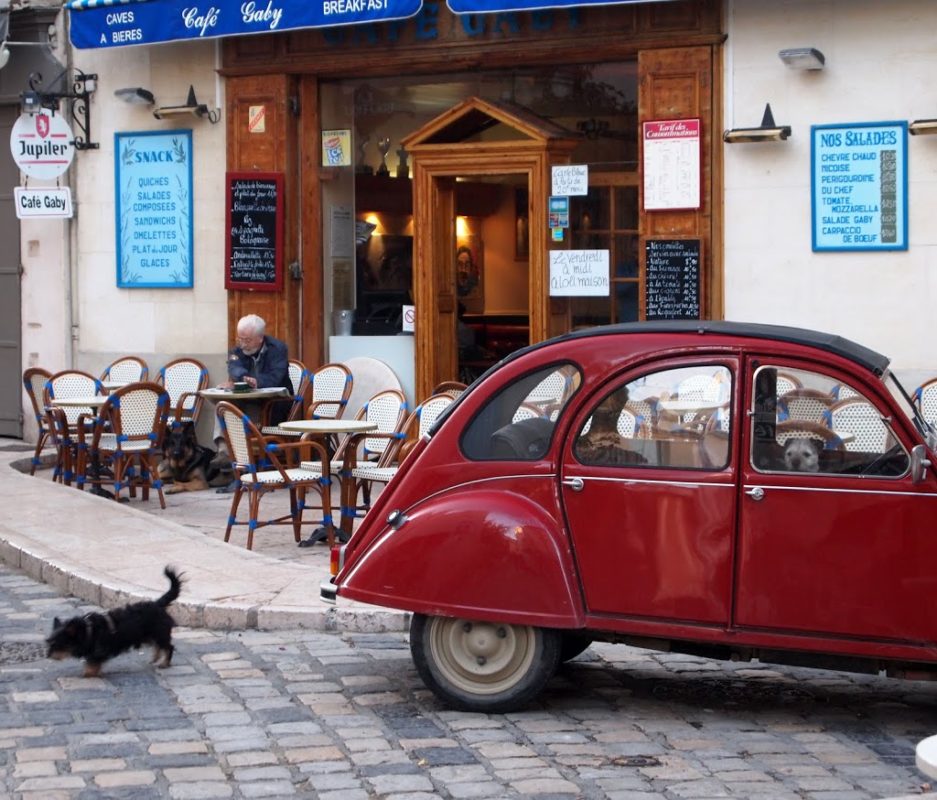 We had been sitting ‘round tables at Café Gaby before Marco arrived.  It was our go-to café since we first came to Lourmarin in the late 1990s, when le tabac was still directly across from Gaby’s and the International Herald Tribune was still in print.  We’d stop off at le tabac for the paper and La Maison du Gibassier Riquier  for croissants before we ordered our café crêmes and settled in for a session of people watching unsurpassed in any other Provence village.  I am biased, I confess, about this particular café—one of three back then and one of four self-described cafes today—but  I am not alone in reporting that one feels as if he or she has inadvertently stumbled onto a movie set when one takes their seat outside at Café Gaby. The back drop is quintessentially Provence and the cast of characters that strolls by is exceptional. 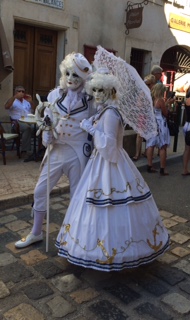 In the mornings, from the mother with her children in tow—they with book bags in hand—heading to school to the handsome French man, Gauloise dangling from his mouth and several baguettes tucked under his arm,  all the while deliveries arrive, locals kiss cheeks, and dogs wait patiently. 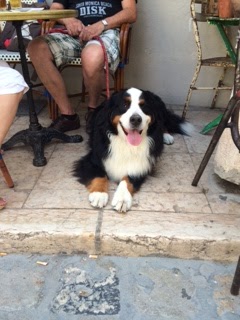 One time we saw one of the local, older and very colorful characters, known for his curmudgeonly behavior—rumor has it he locked a health inspector in the walk-in refrigerator of his small store—take a swing at another store owner. The incident was over before locals could put down their coffees to intervene. Shoulders shrugged and the hum of conversation quickly returned.

On Saturday afternoons in the summer, it’s not unusual to see a bride and groom pass by, wedding party and guests trailing behind. 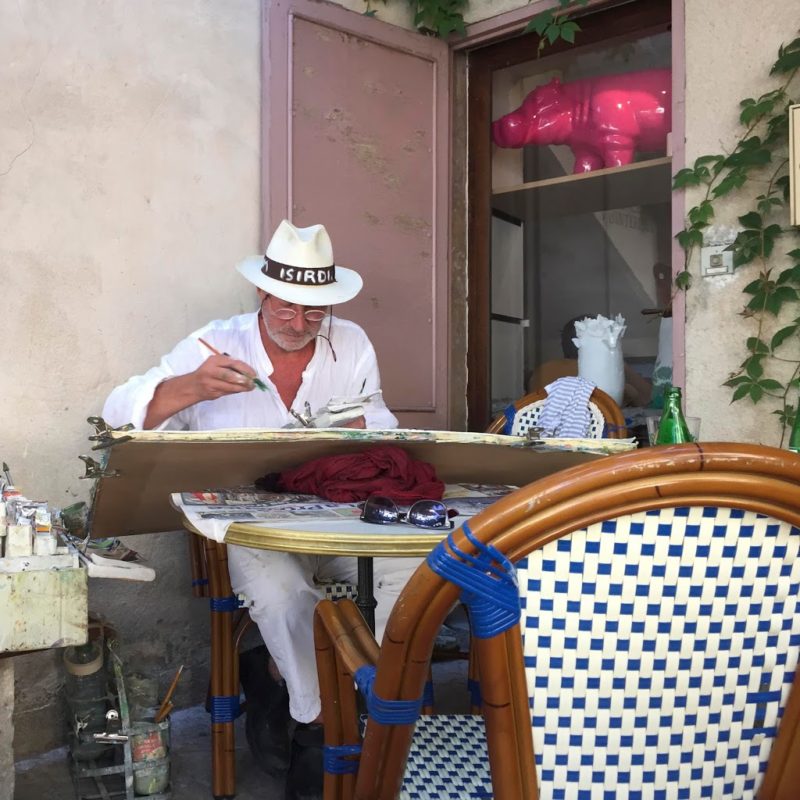 Occasionally, in the morning, you might find internationally celebrated artist Gérard Isirdi, painting the café scene from the corner of Gaby’s terrace, across from the café.  His atelier, located just a few doors down from Gaby’s, is filled with paintings and prints immortalizing the café scenes of Lourmain, especially those of Gaby’s.

Today, nearly twenty years later, the scene on Place l’Ormeau has changed very little from the vantage point of Café Gaby.  A few shops have moved around—most notably, le tabac moved slightly uptown in 2005 to the new Place Henri Barthelemy  and  a gelato parlor opened in its place. The croissants that accompany our cafés crêmes come from the same bakery and remain as buttery and flaky as they’ve always been and the people-watching continues to be top notch. 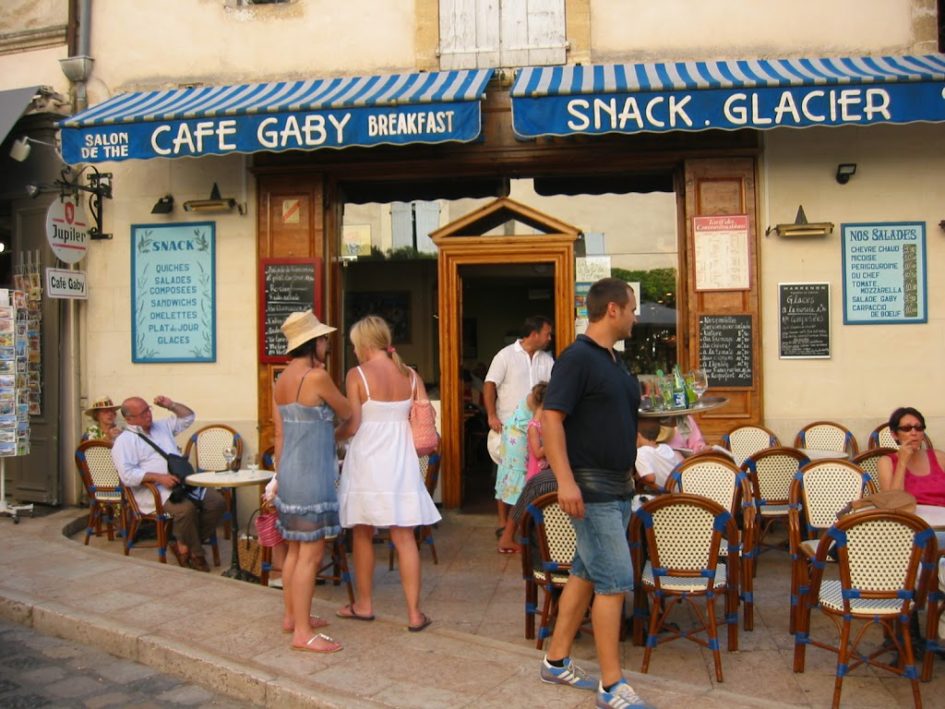 I don’t recall when we first saw Marco at Café Gaby which, I suppose, underscores how easily he slipped into the local scene, becoming part of the tightly woven fabric of this medieval village, embraced by residents as if he’d been born a Lourmarinois. 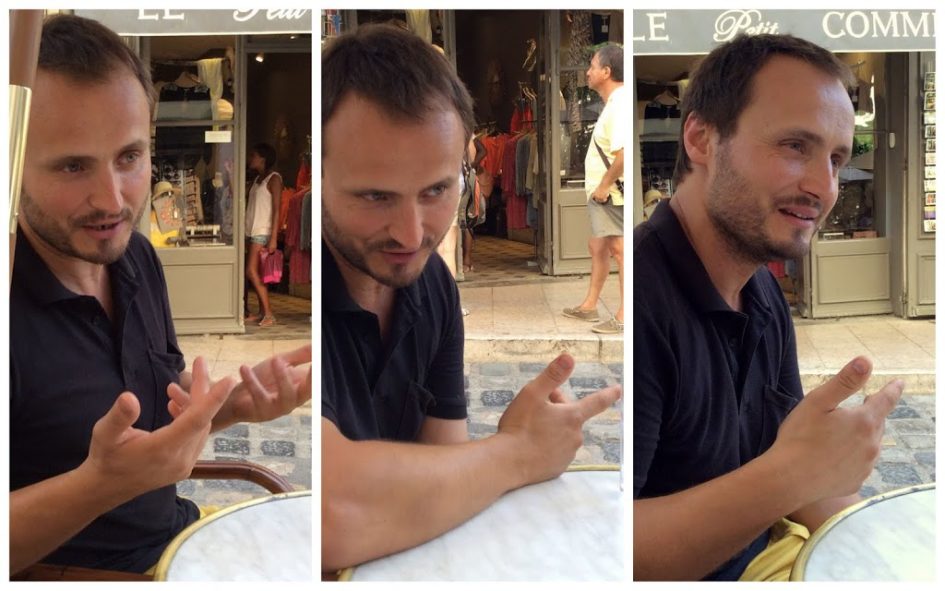 “When customers heard that I wanted to buy the café, they came to me and said ‘we heard you you’d like to buy it and we will lend you some money,’” Marco told us and added that some people who had only a little work gave him small amounts and others who had more money gave him €1000, €2,000 and €3000. (He paid them all back in two years, a year before he told them he would.) 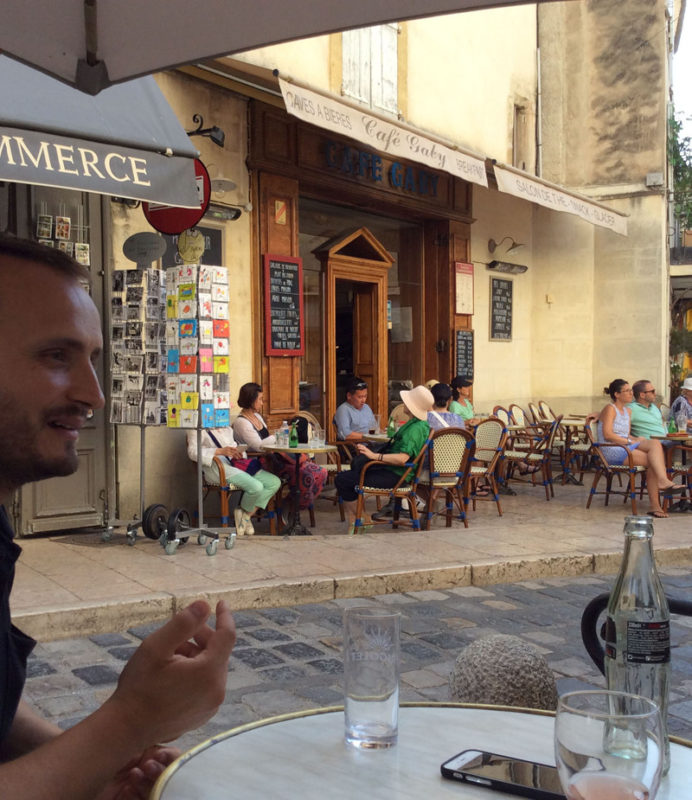 Marco never imagined he would own Gaby. But once he took the reins in 2012, he dove right in. Beginning with the dining area, he refurbished the floor and brightened the décor with some new artwork.  Outside, he replaced the signature blue-and-white-striped awning with the earth-tone-colored one seen today (in deference, at least in part, to the mayor who had been encouraging shop owners to move away from loud colors).  In the kitchen, he added more fresh produce to the menu and sought to capture the spirit of the village in the dishes. Marco continues to take an active role in determining the Plats du Jour.

One of my favorite lunches is the Salade Chêvre Chaud, a bountiful plate of fresh lettuce and tomatoes adorned with toasted baguette slices, topped with warm goat cheese. Add a glass of rosé and I am a happy customer, especially when the bill totals less than €15. 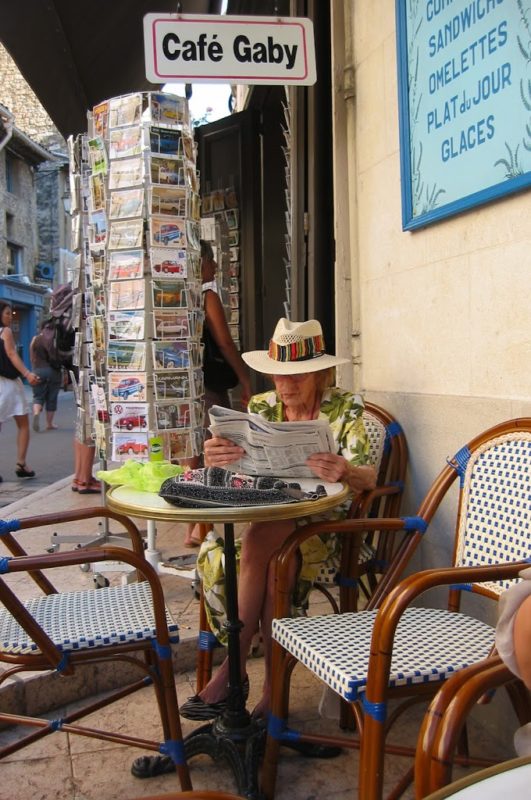 Many friends plan their Friday lunch—after the weekly Lourmarin market—around the house specialty, Aïoli Maison.  A feast of aïoli, haricots vert, potatoes, tomatoes, baby carrots, snails, eggs, and cod fish, one could never complain about a meatless Friday again.  (It is only served on Fridays and is priced around €13.) 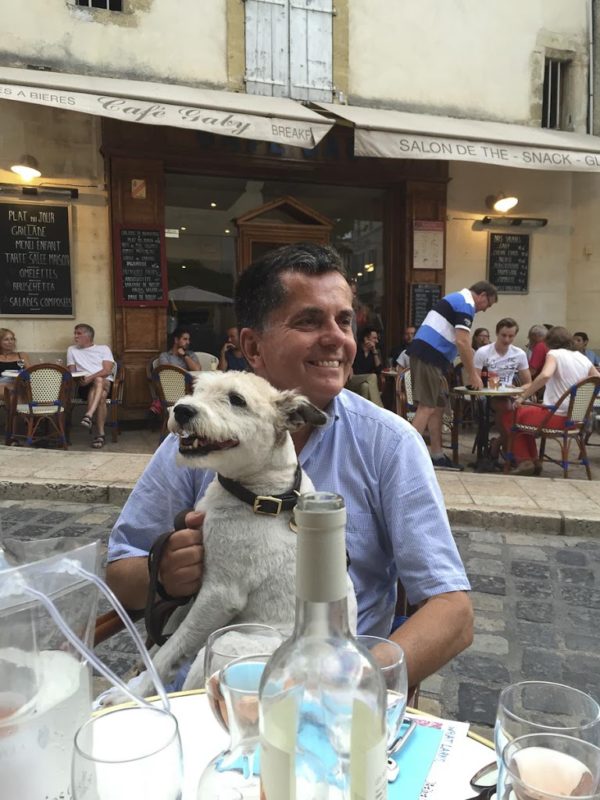 The best part about his job, Marco shared, is connecting with the clients.  “The way I see it, it’s up to us to make [our customers] have a good experience,” Marco said.  And that they do.  “There are clients who come every year.” There are locals who come every day. 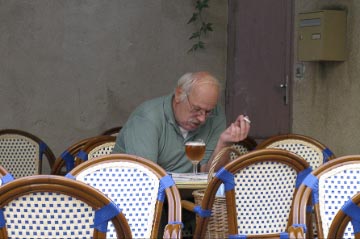 Marco told us that some of his customers—who met at Café Gaby—ended up at the altar.  There was the newly-divorced Belgian man who came here with his son and happened to be seated next to a woman, also from Belgium, who was dining alone.  They later married.  And, lo and behold, Marco himself waited on a customer who would later become his wife!

Not surprisingly, Marco is good to his customers but his generosity exceeds what most of us would imagine.  A trip to Scotland, Ireland or England? Every year, he invites a handful of clients (who wouldn’t otherwise be able to go) to a rugby game in the UK. 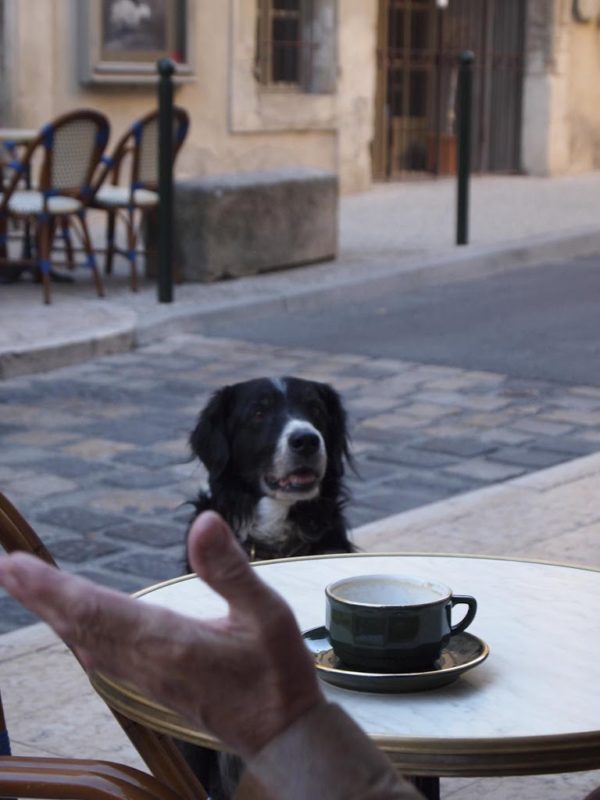 In a village of just 2000 or so people, we can be sure that the owner of one of the most popular cafés has his finger on the pulse of the village and is privy to its secrets.  Oh, the stories he could tell.

Do tell him “coucou” for me the next time you drop by Café Gaby. 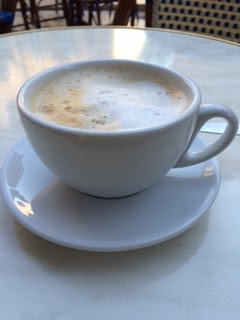 Un gran merci to daughter Alexandra Manfull who acted as the translator for this interview.

Marco lives in Cadenet with his wife and son.