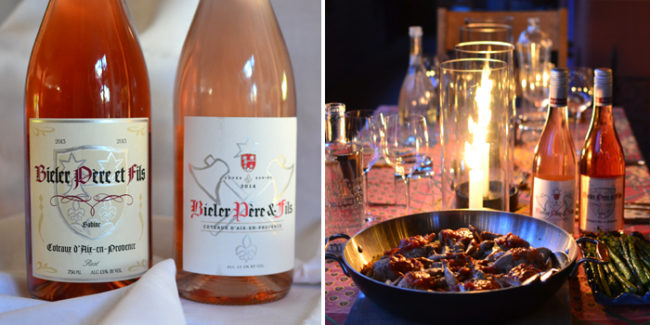 The battle began in a civilized fashion. The candles were lit; the table was set with a Provençal cloth. A large platter of Cailles aux Riz à la Provençale was set down in the center, and the guests were poured a glass of each vintage. Then, the gloves came off. I have been drinking Bieler Père at Fils rosé for quite a few years now. It has been reliable, easily found, and – in our most expensive stores – at a price point that makes me happy. This is, however, the first time I have done a side-by-side tasting of two vintages. My first note is on the color. The 2013 is a much deeper shade of pink than the 2014. I have had light rosés that have been incredibly full-bodied, and deep ones that were bland. Upon tasting, we all found the 2014 was, indeed, lighter in flavor to match its lighter hue, even though it comprises a more complex grape blend (five in the 2014 vs. three in the 2013).

We agreed that both were fine and drinkable, but that we would prefer the 2014 with a lighter meal – perhaps the lighter fish and seafood end of the spectrum. We all enjoyed the 2013 with the Cailles aux Riz à la Provençale. It was a lovely pairing for the gaminess of the quail. (For the Cailles aux Riz recipe, visit Cocoa & Lavender.) The 2013 brought us strawberry, banana, vanilla, and grapefruit, while we all struggled a bit to identify the lightness of the 2014: grassiness with citrus, but no one particular citrus flavor came to mind. It was, all in all, a pleasant wine. When talking this over, we wondered if the depth of color in 2013 could have been from oxidation, and that the 2014 would darken with time. Perhaps, but I don’t think the flavors will develop to give the 2014 the oomph that its predecessors had. We need to test the 2014 again, with different foods. All that pondering took me to the winery’s website and, as they say in France, «Ça explique tout!» “While in 2013 we had an unusually tiny grenache crop and quite a powerful syrah component which resulted in a dark and fuller bodied rosé, 2014 is back to our more traditional Bieler style. It’s driven by more delicate grenache, cinsault and rolle aromas and flavors with the syrah bringing body and cabernet sauvignon adding spice.” One final non-tasting note. The label changed this year. Is that significant? Does it forecast a change in the vintages we will see? Not that we are traditionalists, but each of us preferred the old label. The new one, with ifs hatchets crossed, just didn’t have the elegance of the older label. What do you think? Let us know.

Pairings: The 2013 works well with game, lamb, chicken, heavier fish and seafood, as well as egg and custard dishes. The 2014 should be reserved for light, poached or roasted white fish – delicate dishes like poached chicken and braised vegetables.