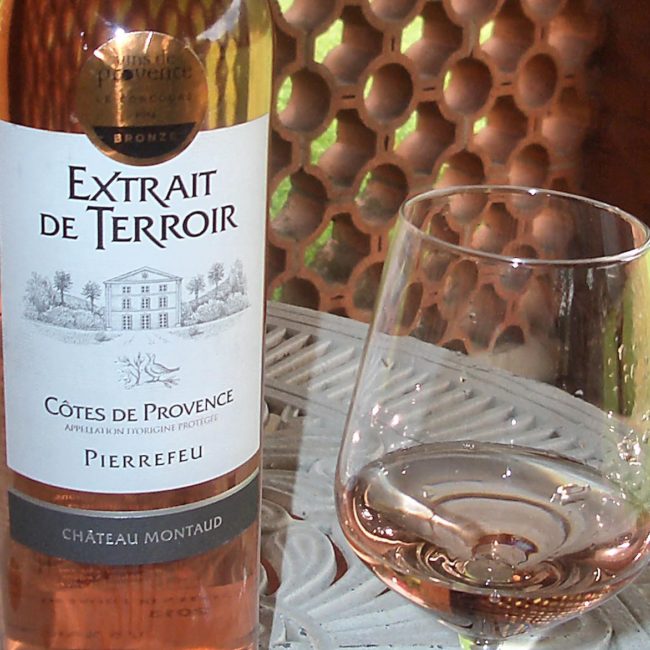 Much cause for celebration at Château Montaud last week as their long anticipated 2013 AOP Côtes de Provence Pierrefeu hit the shelves. This new offering from owner and winemaker Frédéric Ravel represents eleven years of perseverance, as president of the region’s winemaking association, in designating Pierrefeu the newest among four denominations de terroir within the Côtes de Provence AOP. This official decree recognizes the unique terroir-driven character of its wines. Aptly named “Extrait de Terrior,”their rosé, which we were treated to a sneak preview of this summer during a visit to the domaine, is a blend of Grenache, Cinsault, Syrah, and Mourvèdre.

And kudos to Frédéric and his team for being rewarded with a Recommendation from Decanter magazine (August 2014) in their recent tasting of 2013 Côtes de Provence rosés. The panel of judges were stingy with their praise of this year’s selection “with all three judges disappointed by a trend toward pale and flavorless wines.” Château Montaud rosé, however, received an admirable 87 out of 100, commensurate with the ratings given to the much touted Whispering Angel from Sacha Lichine’s Château d’Esclans and the popular Jolie-Pitt & Perrin’s Miraval, both with significantly heftier price tags. Well done.