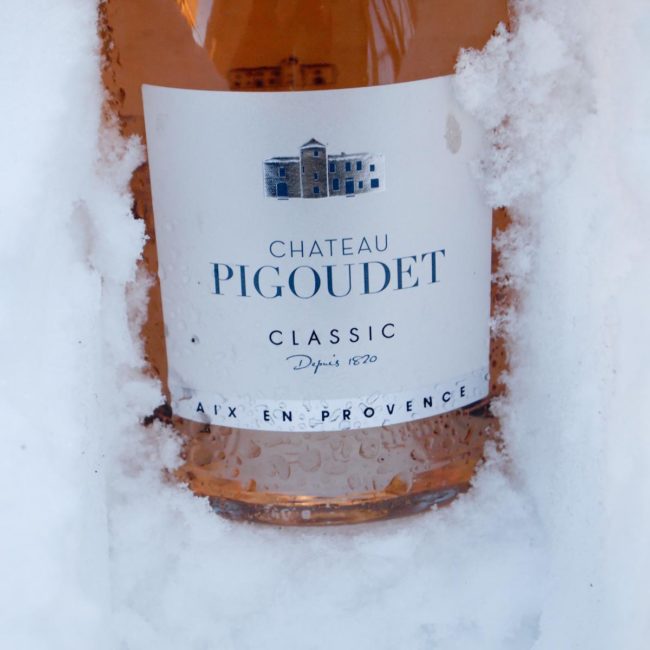 The snow is over three-feet deep in some places around our home in coastal New England.  The wind is howling, shaking the loose window panes of this 18th-century house and causing a shrill whistling noise. A “Winter Storm Watch” is in effect for tonight, when an additional twelve inches of snow may begin to fall. Even parts of Provence may see a dusting of snow by the end of the week.   It is the first day of February and summer seems a long way away.

However, in my cellar—and in all caves in Provence—there lies an invincible summer.  Sealed with corks in various shaped bottles, is a pink elixir with potent transportive qualities—rosé from Provence, the quintessential summer beverage in the South of France and, increasingly, around the world.

Growth of the Provence rosé market has increased at an unparalleled rate compared to red and white wines.  Exports of the dry, very pale pink beverage for which Provence has long been famous, grew 40% on both volume and value from 2012 to 2013. A 41% increase in export volumes was observed in 2012 and 62% in 2011.  In the U.S., double-digit growth in imports has been apparent every year since 2003 and in countries as disparate as Russia and Brazil, Provence rosé is climbing in popularity.

Popularity notwithstanding, rosé remains a summer beverage, titillating palates and beguiling the hours away only when the sun is shining and the weather is warm.   Not for me, though, and not for a growing number of rosé enthusiasts. 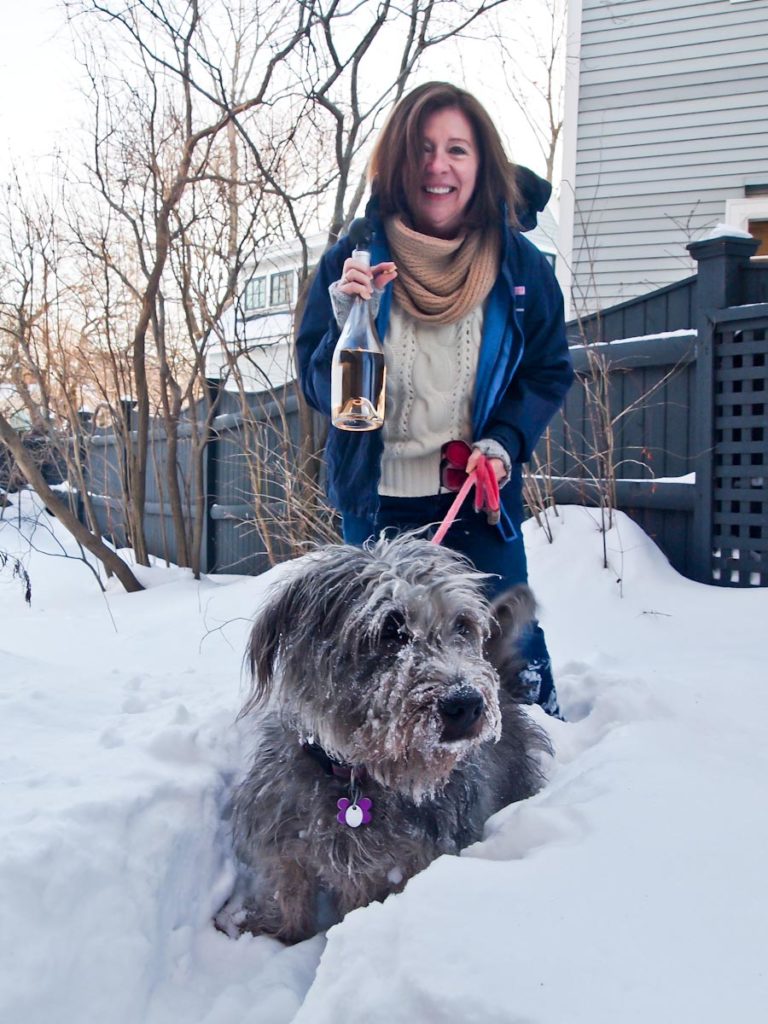 Susan and Redd with a bottle of Château Pigoudet Classic Rosé (2013). Photo by W.T. Manfull

As I stood shivering with cold, having just walked the dogs, I decided to uncork a little summer. I slipped off my mittens, hung up my hat, unwrapped my wool scarf, jettisoned my boots, and descended the stairs to the cellar to retrieve a bottle of rosé.  Holding the bottle of Château Pigoudet Classic Rosé (2013) that I selected caused a flood of summer images to fill my mind.  I could swear I smelled the aroma of the garrigue-covered hills of the Luberon, the essence of summer in Provence for me.

Eric Asimov captured this transportive experience in a 2010 New York Times piece about rosé. “You really don’t need to see the seaside shimmering in the heat to enjoy a bottle, or smell the lavender, garlic, anise and saffron. It’s all there in the glass, along with the blues, pinks, and yellows of a pastel sky, and the sounds of the motor scooters chugging over the cobblestones. Those are my images, at least. Good rosés call forth from each of us their own.” 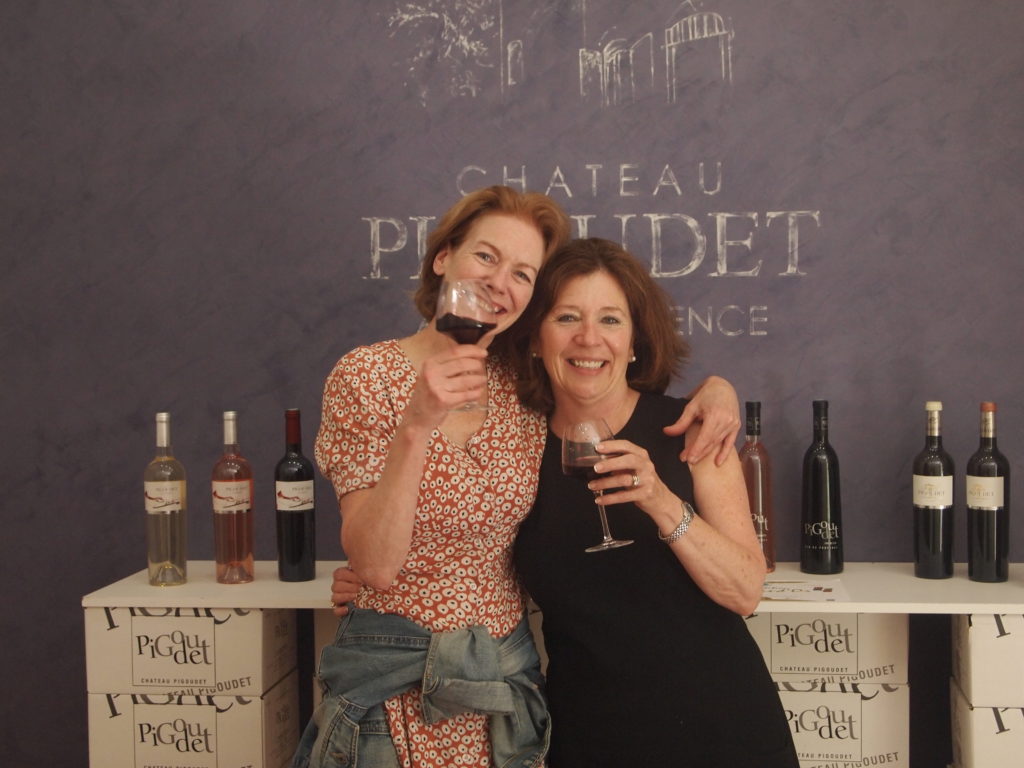 This lovely, very pale pink rosé takes me back to a particular day this summer in Provence, when photographer Pamela O’Neill and I visited Château Pigoudet.  Located far from the seaside of Asimov’s imagination—and 400 meters above sea level—in the outskirts of Rians, a village in the northeastern part of the Coteaux d’Aix-en-Provence appellation of the Provence, wine has been made on this property since the Romans were there, over 2000 years ago.

The estate dates back to the 16th century, but during the French Revolution, it was split up and sold. Since 1820, Château Pigoudet has consisted of 120 hectares, 40 of which are covered by vines on slopes facing south.  Sustainable agriculture is practiced, meaning, for example, that no pesticides are used and that practices such as planting grass between every other row of vines to harness natural resources and cutting buds of vines to control yield are used to ensure the best quality grapes.

Grapes grown include Grenache, Cinsault, Syrah, and Mouvedre for reds and rosés and Vermentino, Sauvignon Blanc, Grenache Blanc, and Ugni Blanc for Whites.  (A little Ugni Blanc is blended in the Château Pigoudet Classic Rosé also.)

Currently, the Château is owned by a German family.  Bernhard Schmidt and his wife Elke Schmidt bought the property in 1992, realizing a life-long dream of making wine.  After the death of her husband, Elke Schmidt has continued to oversee the estate with the help of her daughter and son-in-law, Sabine and Hans-Ulrich Rabe, winemaker Ivan Khougazian, and general manager Aurélien Pont. 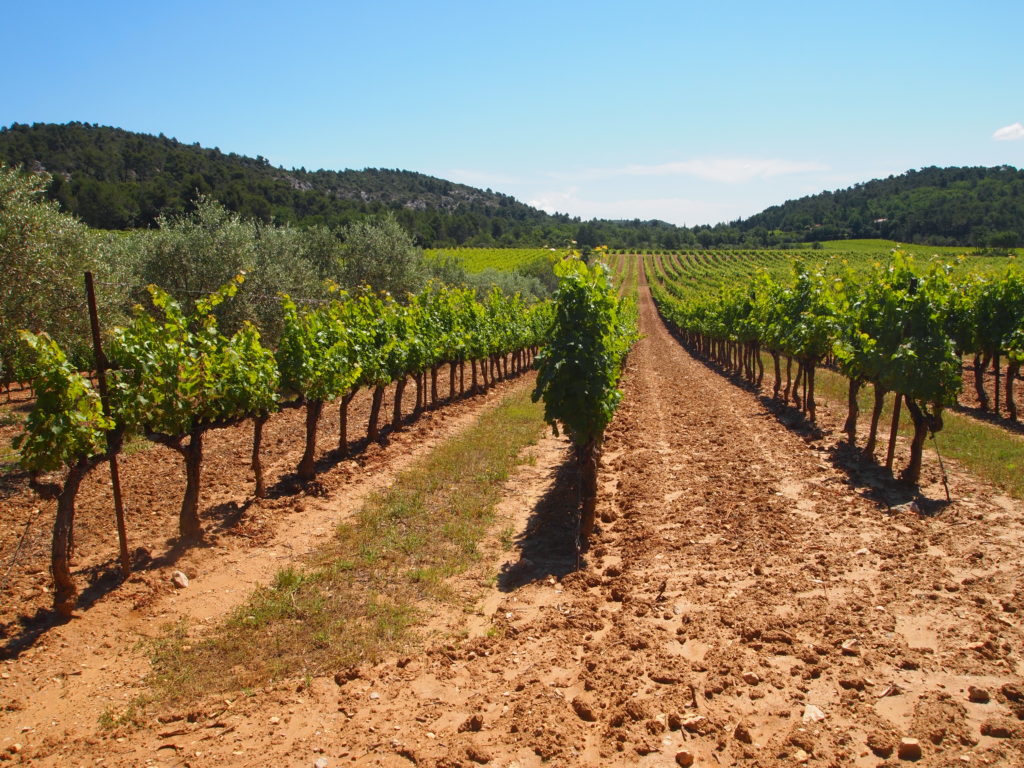 It was a perfect summer day in Provence—bright sun and brilliant blue sky dotted now and again with stray white puffs of clouds—when we caught up with Pont.  I had met him several times over the past two years, always in the depths of winter at rosé tastings hosted by Wines of Provence in Boston and New York City.  Knowing I would be near Château Pigoudet, I had made arrangements to meet him on the property he has overseen for twelve years and where two of my favorite rosés are produced.

“Ten years ago, Château Pigoudet was known for their red wines,” Pont told us as we strolled around the vineyard.  It was Pont who, recognizing the growing popularity of rosé wine, reduced the red production and increased the production of rosé.

“Our aim is to produce an elegant, easy to drink, pale rosé that can be [enjoyed] more like a Champagne,” Pont explained, one with balanced ripeness and acidity, a pleasing aromatic quality, and elegance. 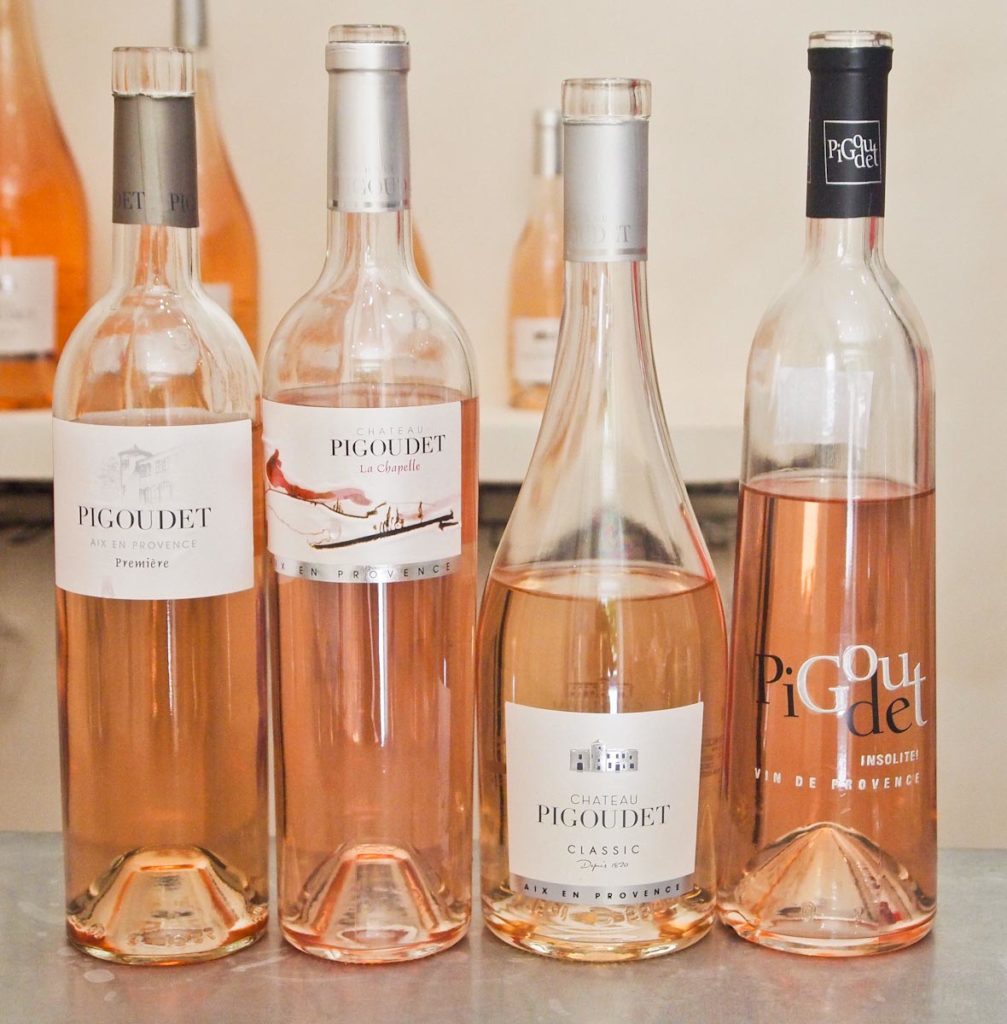 Four of the five Rosés produced by Château Pigoudet. Photo by Pamela O’Neill

It’s a very pale pink blend of Grenache (65%), Cinsault (20%), Cabernet Sauvignon (10%), and Ugni Blanc (5%) presented in a lovely bottle with a classic label befitting the elegant rosé inside.

“Grapes [from our best vineyards] are harvested only at night, beginning around 2:00 or 3:00 in the morning,” Pont told us, “because we want cool grapes [to preserve the fragile aromas].”

Free run juice is collected, followed by direct pressing as soon as possible and minimal skin contact (enough to extract aroma but not so much as to lose the pale color).  The juices are left on the lees at a low temperature for five to fifteen days during which time the juices are tasted every day. Each grape variety is fermented separately, aged in stainless steel vats, blended and bottled after a light filtration. 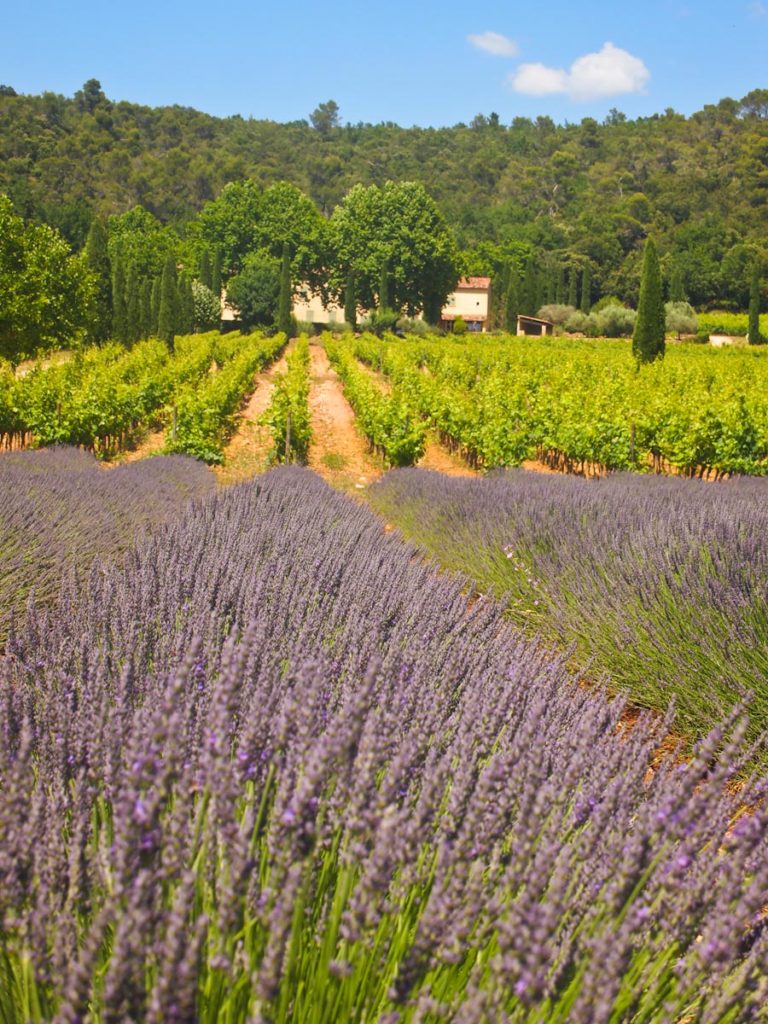 Field of lavender near Château Pigoudet. Photo by Pamela O’Neill

I hoped this rosé would evoke the languorously warm days of the past summer in Provence, the aromas of the nearby fields of lavender and wild rosemary, the carefree lambs grazing in open fields along the winding roads, outdoor dining, fragrant markets, sleeveless dresses, and endless evenings.  I hoped it would erase—if only while I sipped the contents of my glass—the images of the snow-covered pathway and steps that begged for my attention, the necessity to don the layers and layers of clothing to carry out this task, and the thoughts of even more snow to come.

Tasting this medium-bodied rosé back in the summer, I noted its peppery nose (the influence of Grenache), was struck by its silky mouthfeel (owing to the Cinsault and perhaps the chalky characteristics of the soil), and thoroughly enjoyed its lingering citrus finish.

This time around, “elegance” was what came to mind first.  I was immediately pleased to see its very pale pink color and to enjoy its complex nose, taste, finish. 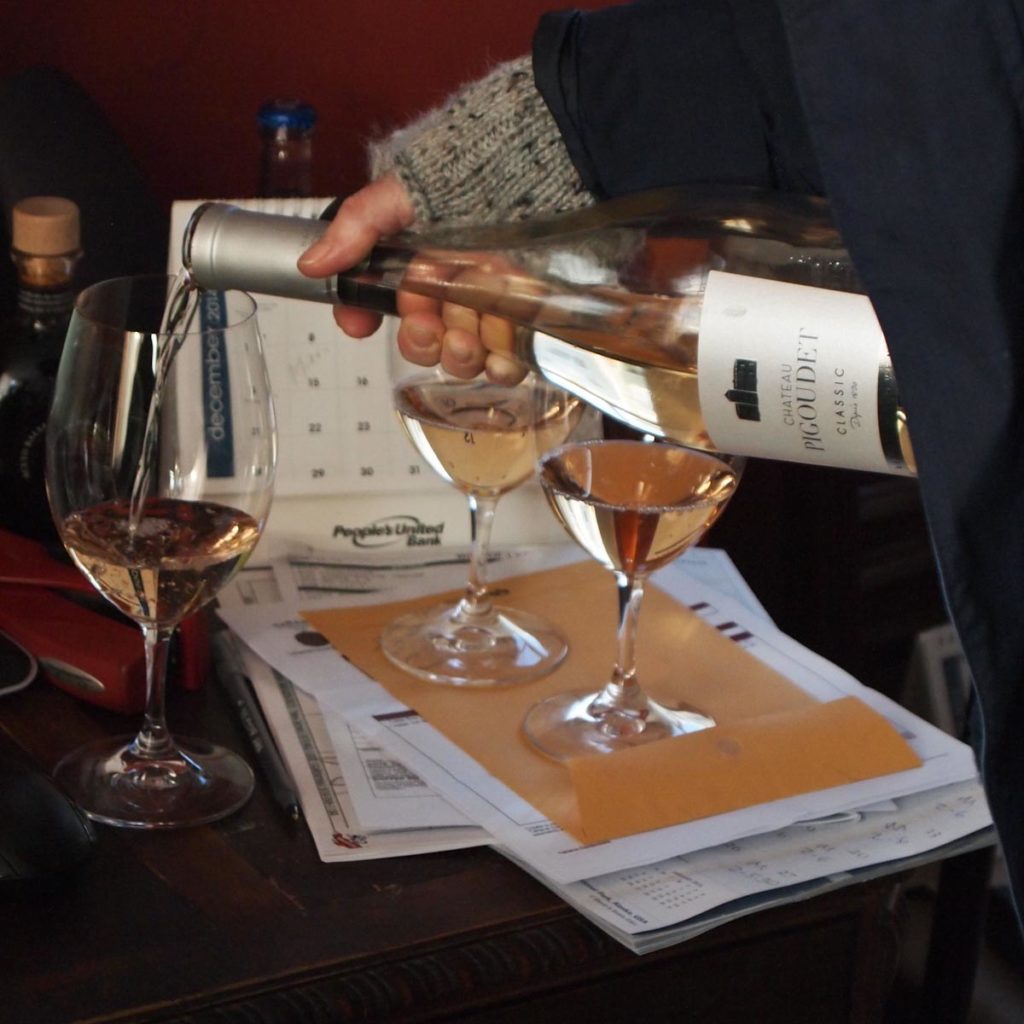 Win Rhoades, proprietor of South Street and Vine in Portsmouth, New Hampshire, smiled broadly and said that it has a “bouquet like a big white wine {such as} Chenin Blanc” and “drinks like a red wine.”  He added, “It has real presence.”

My husband Towny Manfull, clearly charmed by this wine, added that he thought it was a terrific “food rosé” and, uncharacteristically thinking ahead, said it would be great for a Valentine’s Day meal.

Unfortunately, you cannot find this bottle of rosé in the States for Valentine’s Day as it is not yet available here.  Maybe when the 2014 vintage is rolled out later this year, it will grace the shelves of stateside wine stores, Pont told us when we met this past summer.

But, other rosés from Provence—universally recognized as the gold standard of rosé—are available in some savvy wine stores right now.  Yes, rosé is crafted to be enjoyed soon after it is released but more and more producers are making rosés with longer shelf-lives and some are made to be kept in the cellar for several years. (Château d’Esclans’ Garrus has led the vanguard in this direction.)  Drinking a 2013 vintage this winter in all but the least expensive tiers will be very pleasing, I assure you.

I confess that rosé is not my go-to wine in the winter.  Summer is my favorite time to drink rosé but, depending on the mood and the meal, rosé can be an excellent choice all year round.   Tonight  I am opening a Château Pigoudet Classic Red for dinner (to be covered in an upcoming post) and, as enjoyable as I anticipate it will be, it will not evoke images of an invincible summer in the depth of winter… which is exactly what I wanted today. 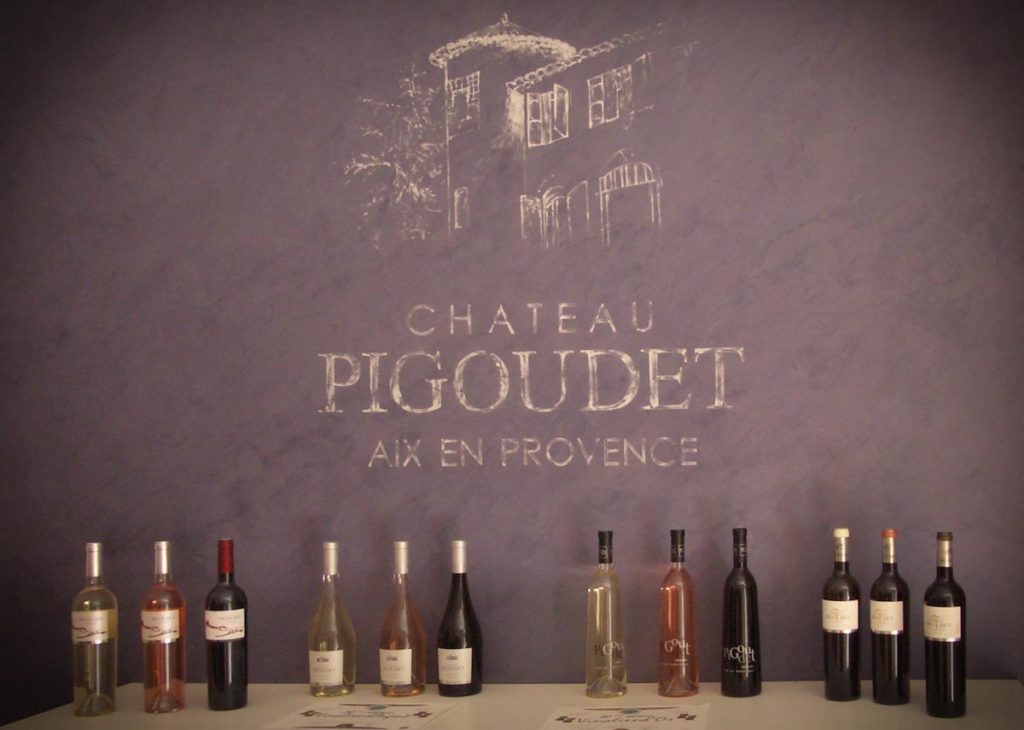 You may also be interested in the following earlier posts about Château Pigoudet:

Two Bottles of Rosé from Provence’s Château Pigoudet: One for Thanksgiving and the Other for Leftovers (My Favorite Meal!)

Provence Rose: Tasting and Travel Notes from “Provence In The City 2014”