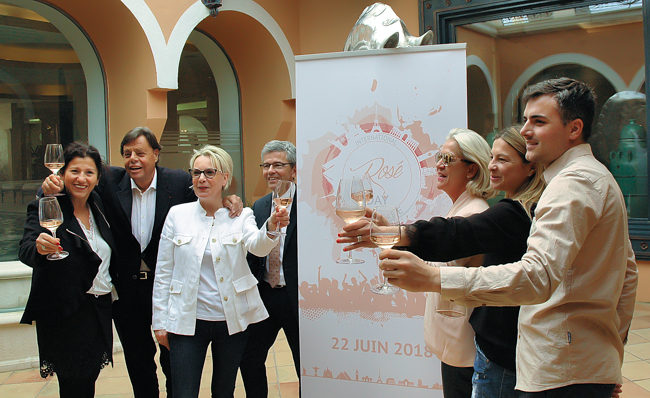 Second in a series of articles about International Rosé Day

I found myself in St. Tropez this week at the elegant Château de la Messardière, a five-star hotel overlooking the bay of Pampelonne where I attended an official press conference on the inauguration of International Rosé Day, brainchild of the Organisation Internationale du Rosé (OIR).   Despite rosé’s 2600 year history here in Provence, this newborn holiday was inspired by its much more recent and thoroughly modern makeover which has, at long last, established pink as a color that counts in the world of wine.  Although spearheaded in Provence, incontestable ambassador of pink, Rosé Day is intended as a worldwide celebration with international producers, distributors, and wine lovers encouraged to mark the day — the 22nd of June — in their own unique style. 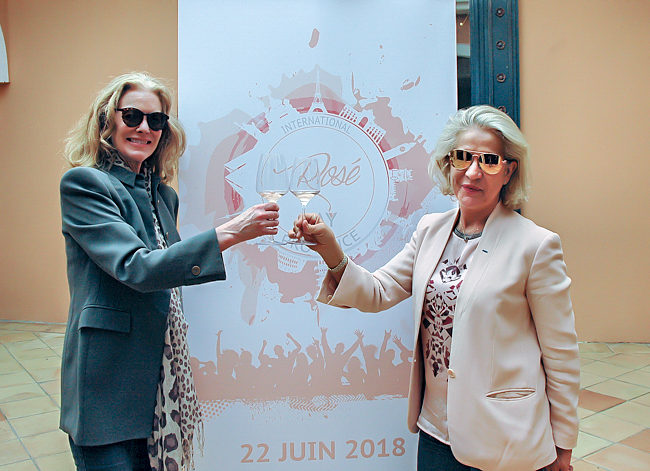 At the helm of the project, Valérie Rouselle, owner of Château Roubine and Château Sainte-Béatrice, explained the thinking behind selecting the month of June to pay tribute to a wine that, for all pink-blooded Provençaux at heart, is the pan-seasonal nectar of choice.  The answer, quite simply, is that the mere thought of rosé summons a sun blazing in azure blue skies, days that last forever, cigales a-singing, and vacation from care at any time of the year.  It is the soul of summer in a glass.  So Rosé Day will forevermore join the summer solstice (well, in the northern hemisphere) and, here in France, the Festival of Music at the end of June to herald us swinging and sipping into the heart of summer.  Rather than schedule the annual fête on a specific date, Rosé Day will be fêted on whatever date falls on the fourth Friday in June.  As Valérie put it, Friday’s “esprit after-work” aligns perfectly with the convivial personality of rosé (though, truth be known, nary a brow is raised in village cafés at a pre-work rosé).

St. Tropez has been designated Rosé Day epicenter with plans for gastronomic, vinicultural, and other activities afoot, including a gala event with a surprise celebrity DJ.  The pièce de résistance will be the lighting of the Citadel at the mouth of the Gulf of St. Tropez, where it has reigned over the village and bay since the early 1600s.  The choice of the Citadel to coronate International Rosé Day is not only befitting given its lofty position, visible for miles in all directions, but, as charismatic architectural lighting designer Alain Guillot, introduced by Valérie as “The Prince of Light,” reminded us, it also houses the tropézienne maritime history museum, which chronicles the port’s historical importance to the region’s wine trade since ancient Greek occupation.  And what were the Greeks trading?  Aye, rosé.  At precisely 7 p.m., Alain’s artistry will be revealed as the fortress is robed in 50 shades of pink while the rosé faithful, at myriad celebrations around the globe, simultaneously raise a glass in homage.  (See previous article in PWZ for some locales and watch for others to be announced.)

Fabienne Joly, president of the Centre du Rosé and vice president of the OIR, announced that the center will host a reception on the afternoon of the 22nd focused on their remarkable research, which addresses issues such as aroma and color, climate change, and vinification techniques.  Located in Vidauban in the Var, their mission has long been to share information not only with rosé producers in Provence but throughout the world.

With eight weeks still to go until kick-off, I will undoubtedly be spoiled for choice as to where to raise my glass on Rosé Day.  Thus far, there are close to 100 participants who have jumped on the bandwagon orchestrating events in village squares, vineyards, and cafés and restaurants throughout Provence.  While sipping a lovely rosé from Château Roubine and munching delectable canapés, I learned from Virginie Dubille, director of communication for Château Léoube, that a festive do is in the works down in Bormes-les-Mimosas, to be held at Café de Léoube on Pellegrin Beach.  Très tempting!  I am most excited, however, to learn where you have raised your glass, so don’t forget to post with #roséday.