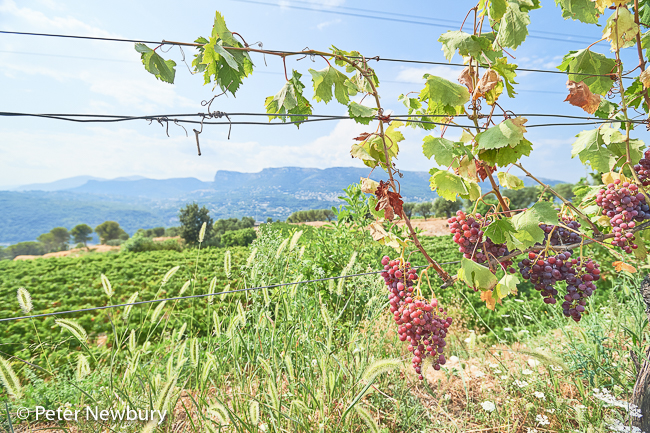 The tiny village of St. Romain de Bellet is a true oasis in the bustle of the Côte d’Azur: vegetable gardens, olive groves and patches of vineyard cling to the hills rising steeply above the city of Nice. Standing here, just a few kilometers from the gleaming blue Mediterranean, it is easy to forget that this is where the Ancient Greeks planted the first vines on French soil several centuries before the common era. During the French Revolution, this quiet hamlet was renamed Bacchus in recognition of its wine-making stature.

The vineyards around St. Romain de Bellet constitute the AOC Bellet, one of the smallest appellations in France and the only AOC located entirely within the city limits of a single town. 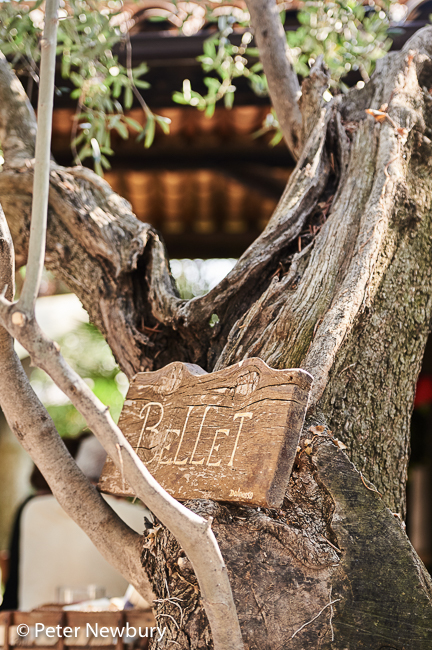 The vineyards dot the hills just West of the city of Nice, at an altitude of 200 to 400 meters above sea level, on the left bank of the Var River. The southernmost vineyards are only four kilometers from the Mediterranean Sea, enjoying long summers and cooling sea breezes.

One of the oldest appellations in France (established in 1941), Bellet has a long history of wine-making. The first vines were planted by the Phocaeans, ancient Greeks who founded Marseille and Nice several centuries before the common era. Throughout history, Bellet wines were prized by kings and presidents, but phylloxera and the two World Wars led to a steep drop in the area planted to vines, producers turning to more lucrative agricultural pursuits. 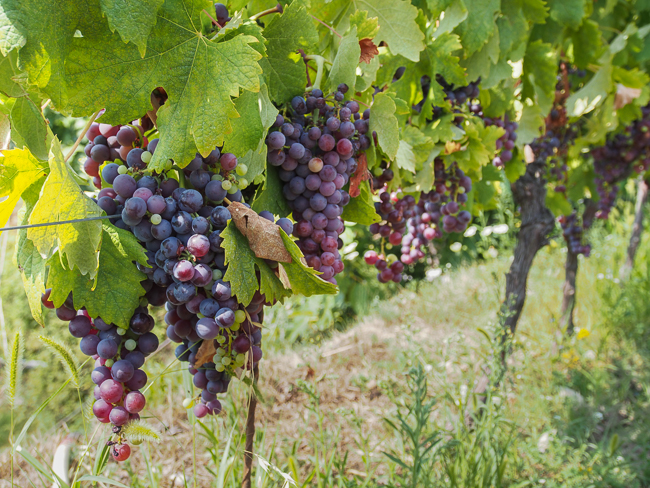 From over 200 hectares (494 acres) before World War II, the AOC significantly decreased in size and today includes just under 60 hectares (148 acres) of vineyard. In the 1990s, after decades of decline, the appellation was revitalized: new methods and techniques revitalize the wines and save the vineyards from invasion by urban development.

Today, nine producers grow a number of grape varieties—including Rolle, Chardonnay, Braquet, Grenache and Folle Noire—and make white, rosé and red wines. The production is small, only about 120,000 bottles per year, so most of the wines are consumed locally. But they are well worth seeking out: unique and memorable, they are the perfect way to experience the true art de vivre of the Côte d’Azur. 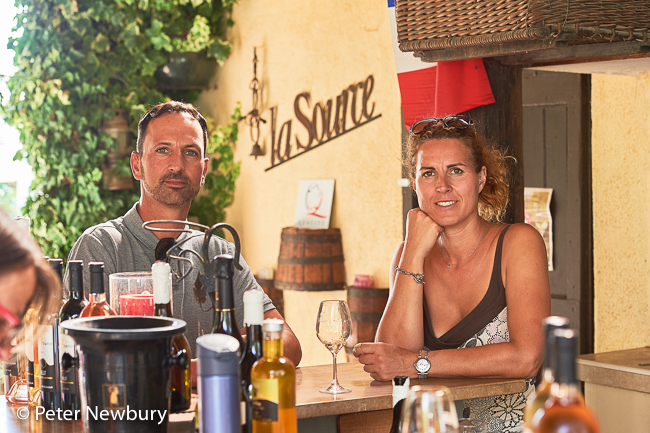 The AOC is a mix of historic estates and new ones. Carine and Eric Dalmasso, owners of Domaine de la Source, are relative newcomers to the appellation: the Dalmasso family purchased the land in 1980 and started making wine in 1991. Their passion for wine-making, spirit of innovation, and focus on quality are the hallmark of the AOC today.

On seven hectares (17 acres) of land, five of which are old vines and two new plantings, Carine and Eric Dalmasso grow several grape varietals from which they craft around 20,000 bottles of wine a year: white, rosé, and red. As Carine points out small patches of vineyard up and down the hill and explains that even the same grapes grown on different parcels ripen a week or two apart, it becomes clear that making wine in Bellet requires passion and much patience. 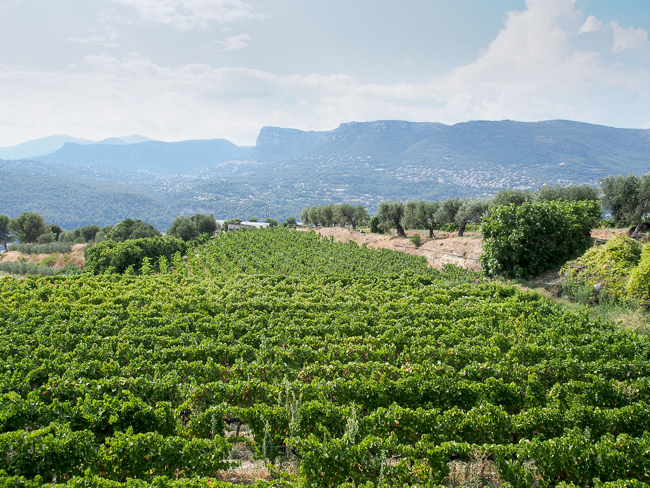 There isn’t much flat ground here: the vines cling to the sides of the hill between 200 and 400 meters above sea level, on terraced vineyards called restanques. This makes manual harvesting the only possibility, something also required by appellation law. The vineyards are dispersed among farmland and private gardens, occupying the parcels of land best suited to grape growing.

The soil, a mix of sand and round river rocks, bears the unique name of poudinge. It is loose and well-drained, allowing the water to seep in and nourish the roots of the vines even in hot Mediterranean summers.  It is also rich in minerals, giving the wines of Bellet a delightful mineral structure and persistence on the palate.

The climate here is predictably Mediterranean: sunny and dry, with hot summers and mild winters. The winds that roll down the Var River Valley from the pre-Alps (only an hour or so to the north) cool off the slopes regularly, allowing the grapes to maintain acidity even in the hot Riviera summers. The cooling breezes off the Mediterranean, which you feel when standing in the vineyards of Bellet, also contribute to the freshness necessary for wines enjoyed on the sunny Côte d’Azur.

The Bellet whites, made primarily of Rolle, are fresh and aromatic when aged in stainless steel. Some producers ferment and age the whites in oak, which gives them richness and roundness. The white of Domaine de la Source, made from Rolle, combines an astounding freshness with flavor and a smooth mouthfeel. With great acidity, it is a perfect pairing for lighter foods, the local salade niçoise and Mediterranean seabass. 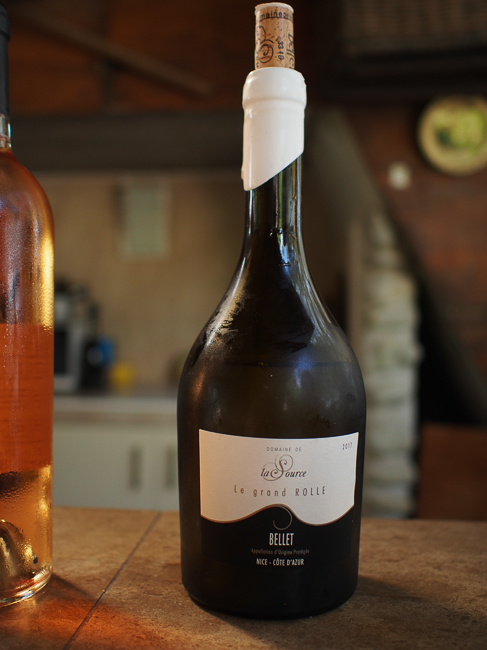 Le Grand Rolle, made from Rolle from the oldest vines on the estate, is a more serious white wine, round and complex on the palate, with a long finish and a richness that comes partly from the fact that 5% of the grapes are aged in oak barrels. Perfect with scallops or a zucchini gratin, Le Grand Rolle can rival any great white in complexity and finesse.

The rosés of Bellet tend to be more robust than typical Provence rosés and showcase rich aromas of ripe strawberries and an alcohol level often above 13%. They pair well with the specialties of Nice: socca (a chickpea pancake) and pissaladiere (a caramelized onion tart).

La Source rosé, made entirely from Braquet, is crisper and lighter than many other rosés from the appellation. It seduces with wild rose aromas that turn into peach and red fruits as it opens up. On the palate, it displays a great balance of acidity and body and the floral and fruity flavors the nose promised. It is perfect for the warm days on the Côte d’Azur but can also take you into cooler weather. 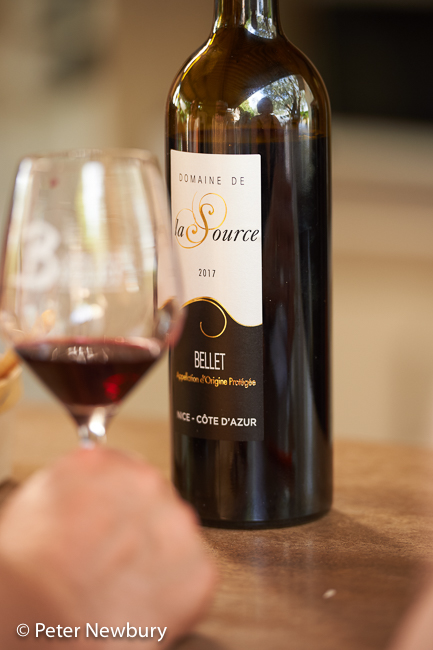 The red La Source, made from 80% Folle Noire and 20% Grenache, blends aromas of forest berries with a floral note that gives it lightness. Fruity and high in acid, it has notable but gentle tannins, making it the perfect pairing for a slice of jambon sec or a bite of rich gorgonzola.

The reds of Bellet must contain at least 60% Folle Noire, with some grenache. They tend to be fruity and floral in youth developing aromas and flavors of forest berries as they age. By law, they must be aged in oak for at least 1 year. Folle Noire tends to be quite tannic, so the reds benefit from aging both before and after bottling. With time, the tannins soften and the wine becomes more complex, keeping the structure and developing secondary aromas and flavors of candied fruit and nuts. The wines have firm acidity and a hint of minerality. 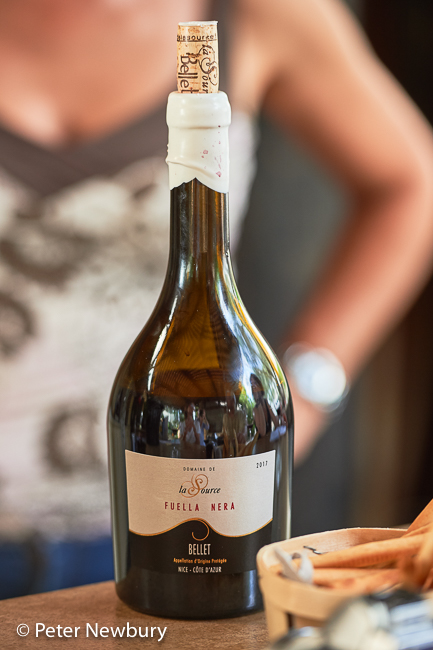 Folle Noire is a finicky grape: it is very productive but can ripen unevenly. The high tannins and acidity need to be treated carefully. And in years with very hot summers, such as 2015, the grape can stop ripening temporarily due to excessive heat. The resulting wines taste of cooked fruit and have a slightly oxidized character. The tannins become sandy, present but not harsh.

In addition to crafting the well-balanced flagship wines of the estate, Carine and Eric also like to experiment: in 2015, they made Fuella Nera, a robust yet elegant wine of pure Folle Noire, a rarity in the appellation. With a production of 700 bottles a year, the wine is a gem to be sought out. 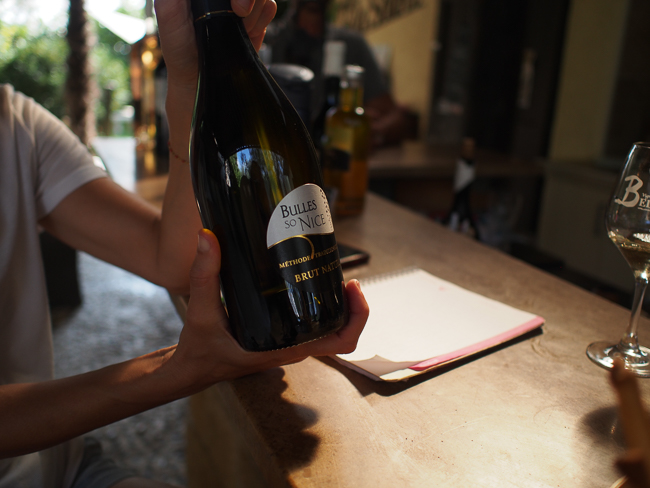 In June 2019, they released the first bottling of sparkling wine, Bulles so Nice, made from 100% Rolle. Made in the traditional method (the same method used to craft Champagne), this robust wine has no added sugar, but the ripeness of Rolle gives it a round mouthfeel and significant body. Perfect for fish fry or chicken bouillabaisse, but also lending itself to aperitif hour, the wine is fun and thought-provoking.

Carine and Eric’s passion for the wines they make is clear in everything they do, from the way the grapes are grown to the memorable wines produced. The domaine is organic both in the vineyard and in the winery and practices some of the principles of biodynamic viticulture, planting, harvesting and bottling in sync with the moon cycles so as to keep the integrity of the wines, which, as Carine points out, are living products. 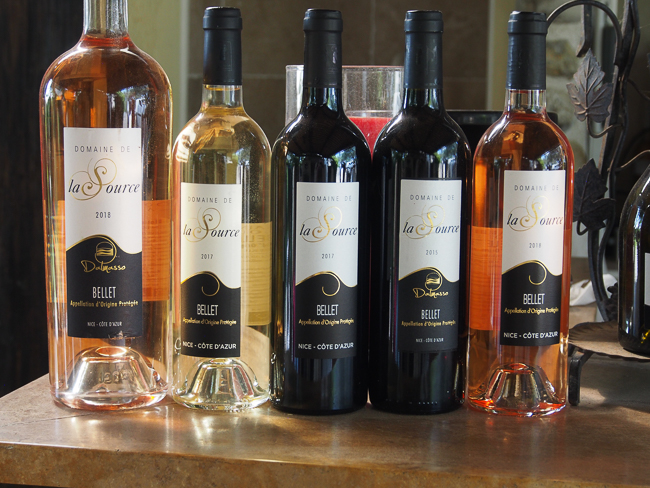 The wines of Domaine de la Source showcase marvelously the quality Bellet is capable of. They are well-balanced, fresh and easy-drinking, seducing both those familiar with them as well as visitors to the Côte d’Azur. They grace the wines lists of some of the most famous restaurants of the French Riviera and promise a bright future for this little-known appellation. 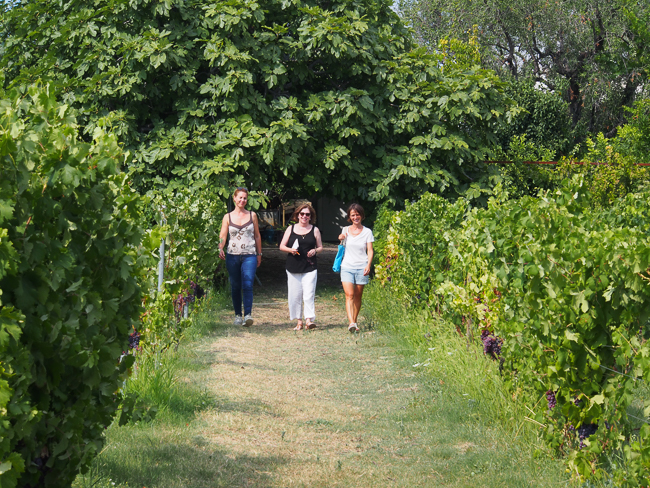 A stroll in the vineyard with Carine Dalmasso, Susan Manfull and Viktorija Todorovska. Photo by W.T. Manfull