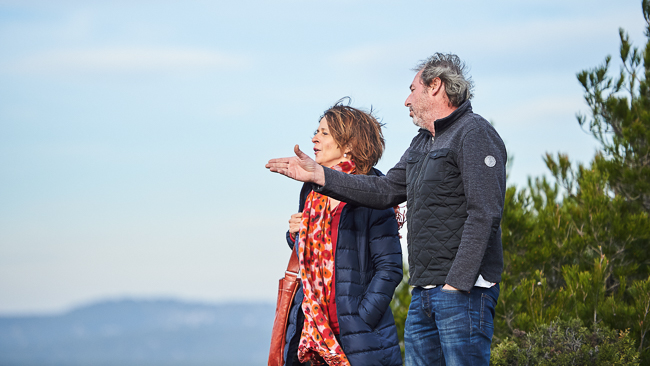 Cassis is the most beautiful AOC (appellation d’origine contrôlée) in France: the vineyards cling to the slopes of a magical amphitheater that plunges towards the shimmering Mediterranean. The Phocaeans (ancient Greeks from Asia Minor) must have been enchanted with these slopes when they first saw them 2,600 years ago. And they did well to plant them to the vine. The perfect exposure, dry and nutrient-poor soils and the cooling Mediterranean breezes still give rise to some of the most expressive wines of the Mediterranean. The wines of Cassis have made this tiny seafaring village tucked right next to vibrant Marseille one of the references for white wine not just in France but in the world.

In the 16th century, Cassis became renowned for white wines, a unique distinction in a region that at that time produced mostly reds. Today, the Cassis AOC remains unique within Provence with white wines accounting for 67% of production. Rosé, which constitutes about 90% of the production of Provence, in Cassis accounts for 30% and reds account for only 3%. 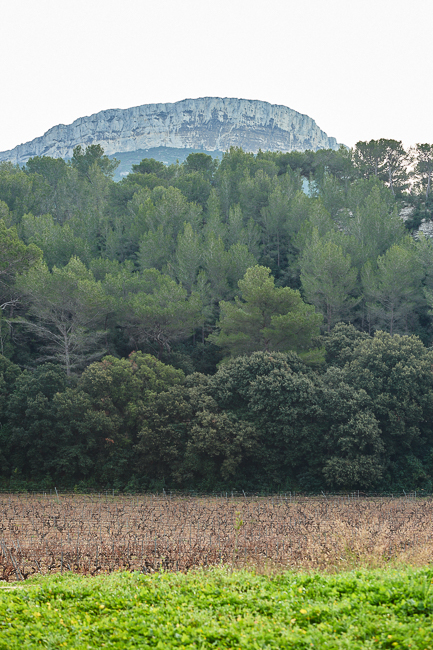 The beautiful setting of Cassis terroir. Photo by Peter Newbury

Due to its long wine-making history, Cassis was one of the first AOCs in France, established in 1936, when the AOC system was first put in place. After being decimated by the phylloxera epidemic in the early 20th century, the vineyards of Cassis recovered thanks to the dedication and passion of local producers. Believing in their terroir and the quality wines it can produce, the wine producers worked tirelessly and today enjoy the recognition that is their due. Cassis remains a reference in the wine world, making wines that travel way beyond its little corner of the world.

Today, the entire vineyard area of Cassis, which covers a little over 200 ha, is part of the Calanques National Park, a series of limestone inlets unique to this part of the Mediterranean coast. Cassis is the only AOC in France to be included within a national park in its entirety. Twelve wineries produce AOC wines, many of them still owned by the historic families of this area. One of those families is Bodin, whose wines were the first AOC Cassis wines to be sold in bottle. Nicolas Bontoux, the current owner and great-grandson of the founder, works side-by-side with his young son to carry the torch of this small but resilient AOC. 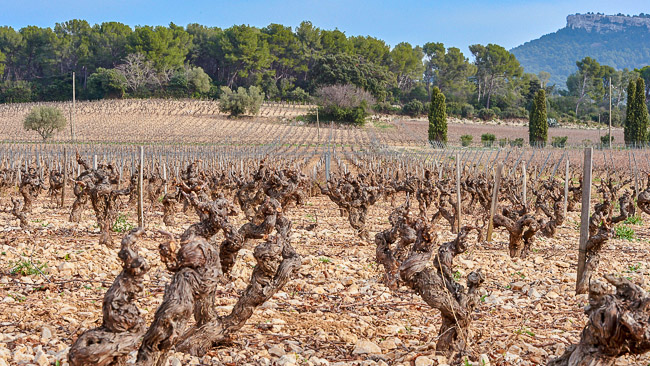 Nicolas’ great-grandfather, Emile Bodin, was instrumental in establishing the Cassis AOC and also in protecting the Cassis vineyards from the encroachment of development. As industrialization advanced in the early 20th century, progress led to plans for a cement factory to be built in the middle of the Cassis vineyards in order to take advantage of the rich clay soils. Emile Bodin foresaw the danger to this historic wine-making area and fought against the factory, even founding a newspaper to influence public opinion against this development that could threaten the vineyards.

Today, his descendants continue the traditions of Cassis even re-planting less popular grapes, such as Muscat, which thrived in these vineyards before phylloxera but was afterwards replaced by grape varietals that produce dry and minerally whites. Nicolas sees much value in tradition and also wants to experiment and have fun with some innovative projects.

The Greeks first planted the vineyards that now constitute the AOC Cassis with Ugni Blanc. Today, the leading white varietals are Marsanne and Clairette and each vineyard must be planted with at least 60% of these varietals. Marsanne, renowned for the whites of the Northern Rhone, has found its second home in Cassis. Here, next to the cool waters of the Mediterranean, it gives elegant and delicate wines, contributing aromas of white flowers and a long finish. Clairette, native to the area, has always thrived in the dry limestone soils. It gives the wines of Cassis freshness and also body, contributing aromas of acacia, white fruits, and a touch of garrigue, the unmistakable aroma of herbs of Provence. 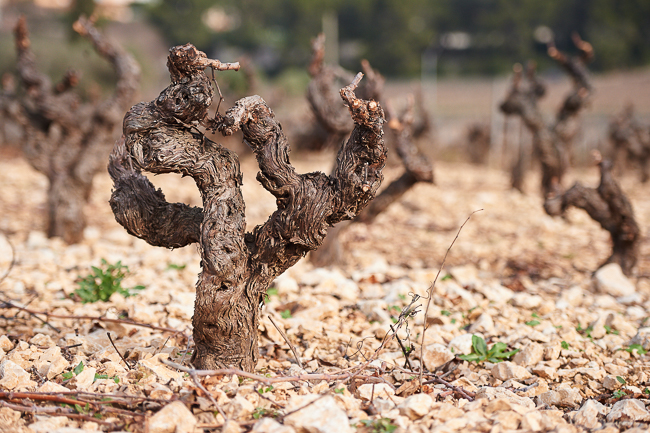 In the vineyard at Bodin wines. Photo by Peter Newbury

Ugni Blanc, now a secondary variety for the whites of Cassis, contributes an important element: the acidity that Cassis whites need in order to age (and Cassis whites are some of the best aging wines in France). Those fortunate enough to have old vine Ugni Blanc can count on its adding aromatic complexity to the wine as it ages.  Bourboulenc, Sauvignon and Pascal Blanc round off the palette of secondary grape varietals, each adding a unique element and contributing to the magic that makes Cassis whites memorable.

Grenache Noir, Cinsault, and Mourvèdre are the leading varietals for rosé and red wines. Each is well-adapted to the dry soils of the Cassis slopes. Cinsault, used mostly in rosé, contributes finesse and a floral character. Grenache Noir’s signature fruity flavors and aromas can round out a rosé, adding body and color, or make a red more supple and unctuous, with fruit and a roundness on the palate. Mourvèdre, the signature grape of Bandol, also thrives in Cassis, and gives the reds tannin and body, contributing darker fruit aromas and notes of spice.

Today, the whites of Cassis are prized not only as a pairing for bouillabaisse but also as delightful aperitif wines and perfect accompaniments for many fish and seafood dishes.

Several important factors make Cassis the perfect terroir for exceptional white wines despite the strong Mediterranean influence and the abundant sunshine. Much of the land under vine is at higher elevation, on slopes that often have to be propped by stone walls to keep the meager soil and the vines in place. The predominantly limestone soils are rich in iron oxide and well-drained. Underground springs provide adequate water supply for the vine, which has to grow long roots to reach this supply. The deep roots also allow the vines to benefit from the mineral content of the deeper layers, thus lending the whites an exceptional minerality. The sea breezes from the Mediterranean provide a relief from the intense sunshine and also deposit sea salt on the grapes, which gives the whites of Cassis their recognizable iodine character. These are wines that taste like the sea. 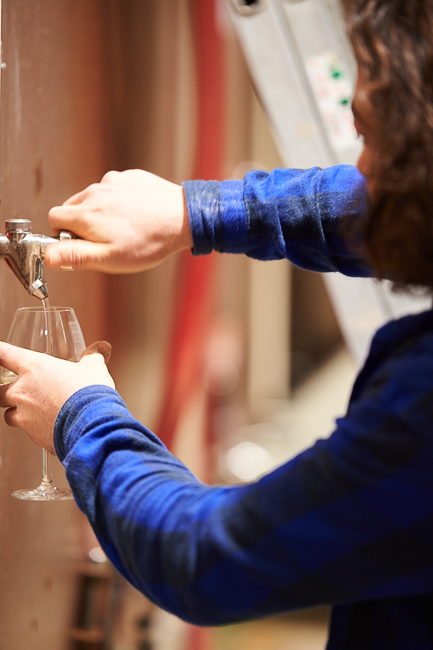 The white Cassis of Bodin—a blend of 40% Marsanne, 30% Clairette, and 30% Ugni Blanc—is redolent of white flower aromas, with a strong mineral note both on the nose and on the palate. It is aged partly in acacia and oak barrels, very lightly toasted so as not to overwhelm the wine. The Bontoux’s work with a cooper who uses steam to toast the barrels—not fire, as is more common—giving the inside a sweeter, less burnt flavor. The higher end Cassis AOC white is made purely from free run juice (no pressed wine) and gets its roundness and finesse from the Marsanne.

Perfect for bouillabaisse and other seafood dishes this wine is easy to understand and even easier to love.

Bodin also makes fruity light rosés and surprising reds. The younger-drinking one not aged in oak is mostly Grenache: fruity and aromatic, it is best served slightly chilled with light foods such as pasta with fresh vegetables or a picnic.

The more serious red from Grenache and Mourvedre spends time in oak barrels and has a more significant structure and tannin base, so needs aging. It pairs best with more robust foods, meat dishes and aged cheese. It is perfect for cold winter days or a sunny spring picnic in the hills above Cassis when the cold winds coming from the sea make you want to warm up.

The Bontoux’s are re-planting Muscat for a fun side project: a naturally sparkling wine (in the style of Moscato d’Asti), with no CO2 added: an easy-drinking wine perfectly suited to this sunny corner of Provence. The AOC regulations do not allow Muscat, so this wine will not be an AOC Cassis, but Nicolas thinks it’s important to experiment and have fun, especially since Muscat is one of the traditional grape varietals of this area. For Nicolas, the pleasure of making wine comes from taking risks and innovating, looking towards the future and experimenting in order to learn. 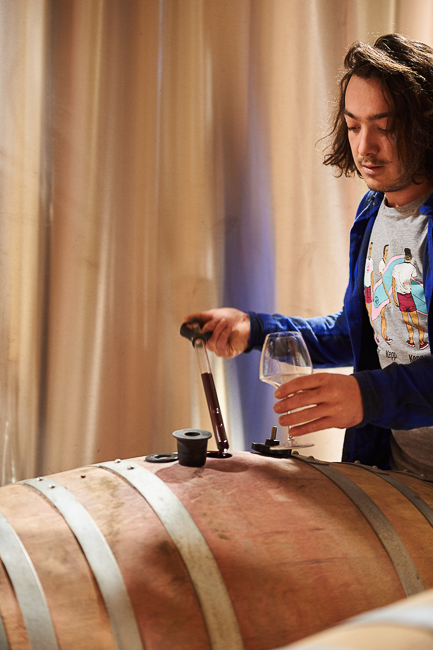 Nicolas’ son, Emile, took over vinification 2 years ago. After leaving home to study in the north and then to work in Switzerland, Emile came back to help his father during an illness and fell in love with the work on the domaine. Now, his father focuses on managing the vineyards and Emile is learning to become a wine-maker with the help of a consulting enologist. He is curious, eager and enthusiastic to show his first results. Humble and open to feedback, he is confident enough to let someone like me (a stranger) taste the wines straight from tank and barrel before the assemblage.

As we walk through the cave, Emile shows me his pride and joy, a cement egg for fermenting Ugni Blanc. He explains that the cement allows limited aeration, letting the wine develop. The unfiltered Ugni Blanc tasted straight out of the cement egg is impressive: powerful, very minerally and with a long finish. It will provide a great backbone to any blend.

The Bontoux’s are quick to point out that nature has been generous to the winemakers of Cassis: the Mediterranean breezes dry the vines and prevent most illnesses. The sun shines here more than in most other vineyard areas, allowing the grapes to ripen reliably. And the wines go well with the local food, most notably bouillabaisse. Cassis is close to Marseille, the second largest city in France, and benefits from the size of the wine market.

But this area faces some important challenges. In recent years, the appellation has suffered from severe droughts. While the vines are well adapted to dry conditions, excessive drought stresses the vine to such an extent that photosynthesis stops and the vine shuts down. This interrupts the ripening of the grapes and can lead to high amounts of acid in the wines, creating wines that are out of balance.

In 2019, the drought was such that the vignerons of Cassis successfully lobbied to be permitted to irrigate their vines. This, of course, is a major undertaking as drip irrigation—the most efficient way of delivering to the vine the amount of water it needs without wasting any—requires an infrastructure that is costly and takes time to install. But to stay viable for the future, the wineries of Cassis are investing.

Another challenge for the wine producers of Cassis remains urban development. Land is precious here and each new plot that becomes a house changes the landscape of this historic vineyard area. Concerned about the environment, Cassis winemakers are turning more towards organic farming practices and sustainable management.

Despite these significant challenges, father and son smile confidently when reflecting on the future. Nicolas, one of the more passionate but also most humble wine-makers I have ever talked to, tells me that his dream would be to continue confidently in the steps of the previous generations of his family, crafting good wines and providing pleasure to his customers. Sounds simple, no? Maybe not simple, but with the passion and dedication of wine makers like the Bontoux’s, certainly possible.