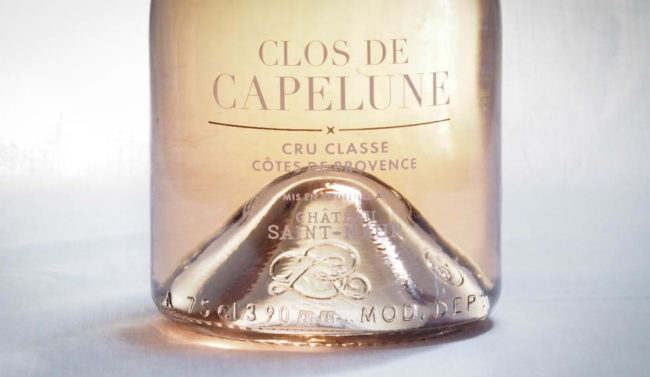 It’s official. Even though here at Chez Manfull, we’ve been enjoying rosé throughout the deep-freeze months of December, January and February, there is something about Memorial Day weekend (in the U.S., at least) that not only ushers in white attire but heralds the start of rosé season.

My email box is filled with links to articles with headlines like “Now is a Fine Time for rosé wine,” “The 25 Best Rosés Under $25,” “Rosé Wine is the Ideal Summer Wine,” “Your Next Lesson: Rosé from Provence.” The shelves at my favorite wine stores are filled with pink wine. The weather is warm (well, warmer than it has been, here in New England). And a week from today, we will be landing in Provence where we will be visiting several châteaux, including Château Saint-Maur Cru Classé. What better time to have our first blind tasting of the latest vintage of rosés? 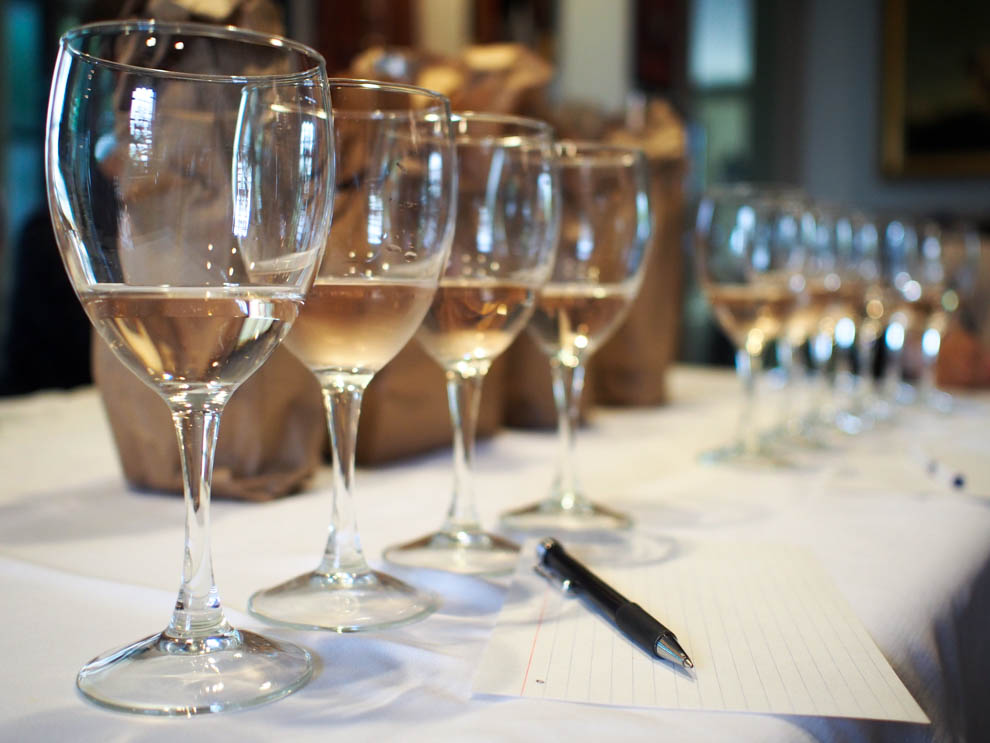 I was introduced to two of these three rosés in 2015 at a Provence in the City Tasting in New York City. By the time my path crossed with these rosés at the tasting, I had already swilled a lot of wine, almost all of which was pink and most of which I would unhesitatingly add to my cellar.  But few of which had stopped my heart. The 2014 vintage of both Clos de Capelune and L’Excellence rosés did.

My pithy notes from that afternoon read, “crisp, fresh, fab minerality, elegant, harmony, complex, second vintage” and an additional notation that the Clos de Capelune was clearly gastronomic, all reflecting what I thought but perhaps not capturing what I felt:  I was immediately smitten. The huge hearts and stars on the margins of the Château Saint-Maur page in my tasting notes, however, did sum up my experience. 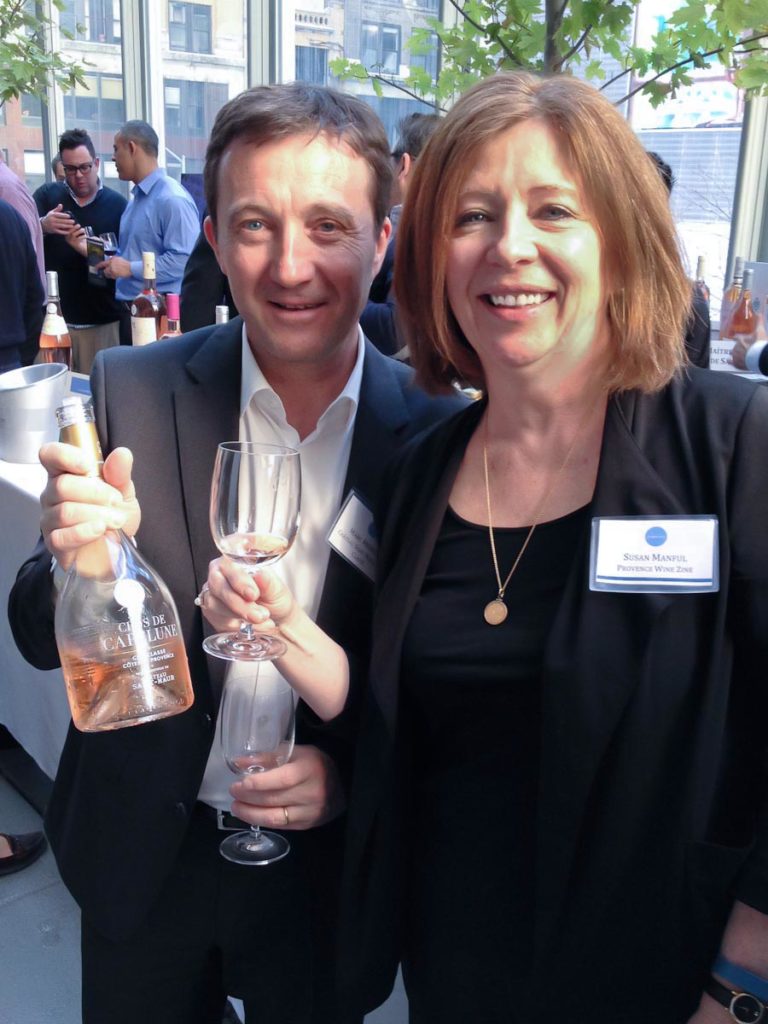 While I was still grappling for words to describe these two rosés in a way that decidedly set them apart from the pack–and probably looking a bit dazed by my discovery of these two stellar rosés—I was introduced to the General Manager of Château Saint-Maur, Marc Monrose.  Although new to Provence, Monrose and father-in-law Roger Zannier, who owns Saint-Maur, were not new to winemaking as Zannier has owned the Quinta do Pessegueiro in the Douro in Portugal for over 25 years now and Monrose has worked with him since 2006.  Clearly their standards are heavenly high but the details of how (and why) they created these wines will have to wait to June when I will meet with them at Château Saint-Maur.

Château Saint-Maur is a “Cru Classé” winery, one of 14 wine estates in Provence that were designated as such in July, 1955, over two decades before Côtes de Provence was designated Appellation d’Origine Contrôlée (AOC, now called Appellation d’Origine Protégée or simply AOP). The Cru Classé designation was based on factors such as the history of the estate, various aspects of viticulture and viniculture, cellar reputation, and overall quality.   Aside from Bordeaux, Provence is the only wine region in France where classification is based on the estate (as opposed to the vineyard area, as is done in Burgundy, Champagne, and Alsace).

Château Saint-Maur is located 10 kilometers (6.2 miles) from Saint-Tropez, between the foothills of the Massif des Maures mountain range and the Mediterranean Sea in the commune of Cogolin. In this stunningly beautiful area of the southernmost part of Côtes de Provence, lie the 54 or so hectares (133 acres) that comprise Château Saint-Maur, about three-quarters of which are devoted to vines and much of the rest of the land blanketed by scrub-land and cork oaks. Protected from the fiercest winds of the mistral, the vines benefit from the cooling breezes of the sea—mitigating hot summer temperatures and helping to prevent powdery mildew and other diseases—and the east-west orientation of the vineyards, ensuring maximum ventilation and further protection from disease (and pests). The roots enjoy a soil of varying amounts of clay-limestone and mica-schist.

Dating back to 600 BCE, the Phoenicians, and the Romans after them, recognized that the confluence of characteristics (e.g., geography, microclimate, soil) in this particular area was ideal for viticulture. The remains of both civilizations have been unearthed across the years, revealing agricultural and winemaking activity dating back over 2000 years.  The Château itself dates back to the 19th century and had been the home of many vignerons until the current owner, Roger Zannier purchased the property in 2011.

After my upcoming visit to the Château in June, I will fill in the historical (and technical) details in a second article; suffice to say now that, by the time Zannier found the property, both the vineyards and the vinification operations had significantly deteriorated. Zannier and Monrose rebuilt vineyards and brought cellar operations into the 21stcentury in a miraculously short period, producing their first vintage in 2013. 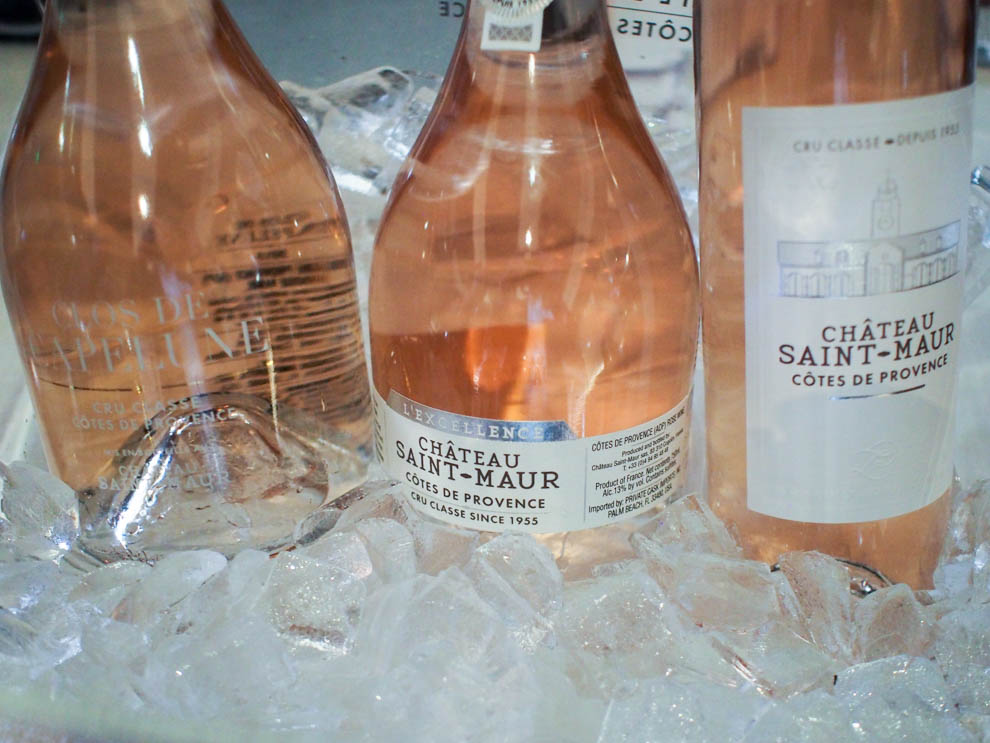 In 2012, “an exceptional 12 hectare plot” was acquired.  Located on the highest part of the property (449 meters/ 1473 feet), it is the highest vineyard in Côtes de Provence and it is the home of the vines dedicated to Clos de Capelune, the top-tier rosé of this trio of top-tier rosés. 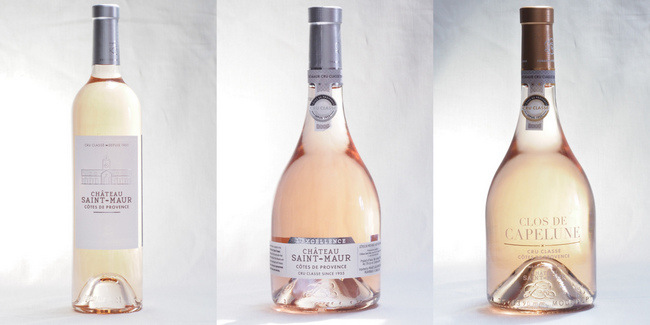 A trio of rosés from Château Saint-Maur. Photo by W.T. Manfull

This was a blind tasting for everyone but me. All of the tasters could be described as people who enjoy a good bottle of rosé—some have had prestige rosés such as Léoube, Les Clans, and Garrus—but no one described him- or herself as a wine buff. We tasted the brown-bagged rosés in ascending order of quality (and price). All are dry rosés, representative of the premium and prestige rosés of Provence. 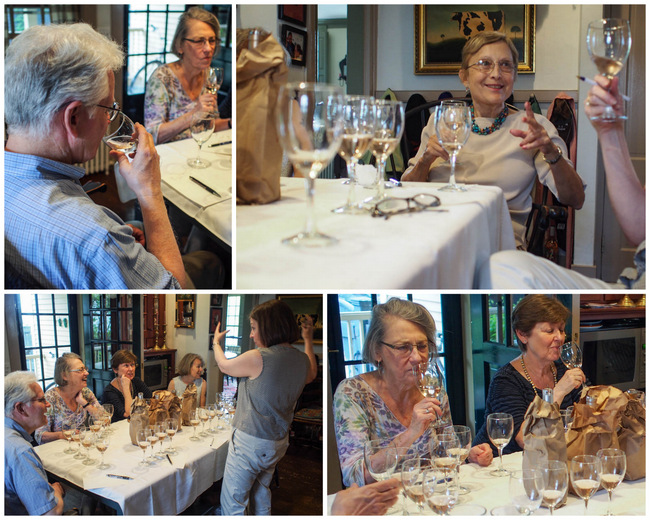 2015 Château Saint-Maur Cru Classé Côtes de Provence (AOP).   This very pale peach-colored rosé is a blend of predominantly Grenache (54%), Cinsault (26%), and Carignan (13%) with a couple of dashes of Mourvèdre and Cabernet Sauvignon (2% each) and a sprinkle of Syrah, Ugni Blanc, and Rolle (1% each). Its freshness wafted from the glass as it waited on the table. Other characteristics of the nose include minerality, white fruits such as peaches, and floral notes, including rose.  As it opened up, the bouquet broadened to include the flavors of honey and citrus which were also detected on the palate as well as the lovely freshness and minerality initially experienced on the nose.  Elegance and exceptional balance with a striking but well integrated acidity. The finish was shorter than expected, but that can be forgiven as the overall experience was exceptional. 13% ABV (Suggested retail price: $25)

2015 Château Saint-Maur Cru Classé L’Excellence Côtes de Provence (AOP). The palest of the flight, it is a very pale pink, shimmering with a very, very pale shade of grey in the glass.  The cépage was predominantly Grenache (45%), Cinsault (30%) and Syrah (25%). The nose was ”quiet,” in the words of one taster; all concurred that it was initially much less fragrant than the first rosé although it opened up as the tasting continued. Perhaps given the quiet nose, we were taken aback by the explosion of flavors on the palate; there are citrus, nectarine, peach, honey and floral notes that provided layers of delicate flavors and a complexity that all tasters felt was not present in the first wine. The mouth was full and round and immensely pleasing. Exceptionally well balanced with crisp acidity.  Lovely as an aperitif but perfect with food, especially seafood. As its name suggests, it is an excellent rosé. 13% ABV (Suggested retail price: $45)

2015 Château Saint-Maur Cru Classé Clos de Capelune Côtes de Provence (AOP).  This very pale peach-colored rosé is an exquisite blend of Cinsault (45%), Syrah (40%), and Grenache (15%) that truly represents all that a prestige rosé can be.  The flavors are not unlike the first two rosés—citrus, stone fruits, minerality, flowers, and honey—but they have even greater elegance and complexity in this wine, like a symphony of flavors flawlessly flowing from inviting start to lingering finish. The mouth was full with traces of unctuousness that begged to be married with food. Well-balanced, elegant, perfect acidity. Limited production and worth seeking. (Suggest retail price: $65) 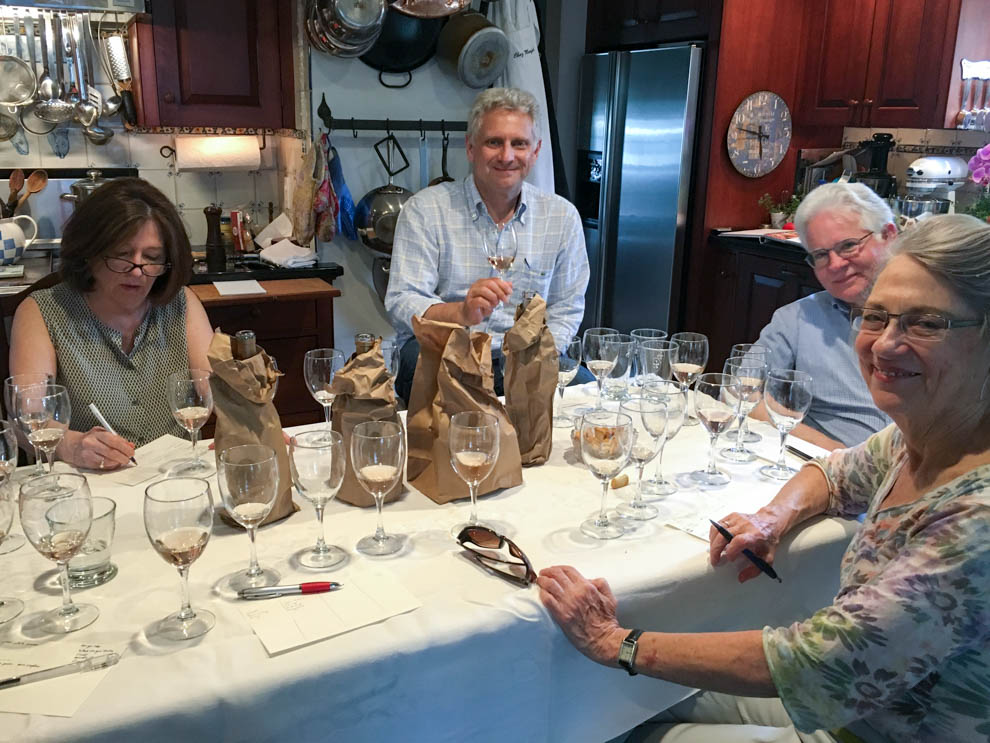 We later served these wines with a Bouillabaisse hot off our stove.  All three rosés worked very well but L’Excellence was a better match than the entry level wine and Clos de Capelune was a match made in heaven. The wines were lively without food but, as is often the case, they were infused with even greater life with a well-paired meal.  Bouillabaisse and rosés from Provence were meant for each other!

For most of us, the top two cuvées are special occasion wines.  Don your white linen pants and start looking for those occasions now! 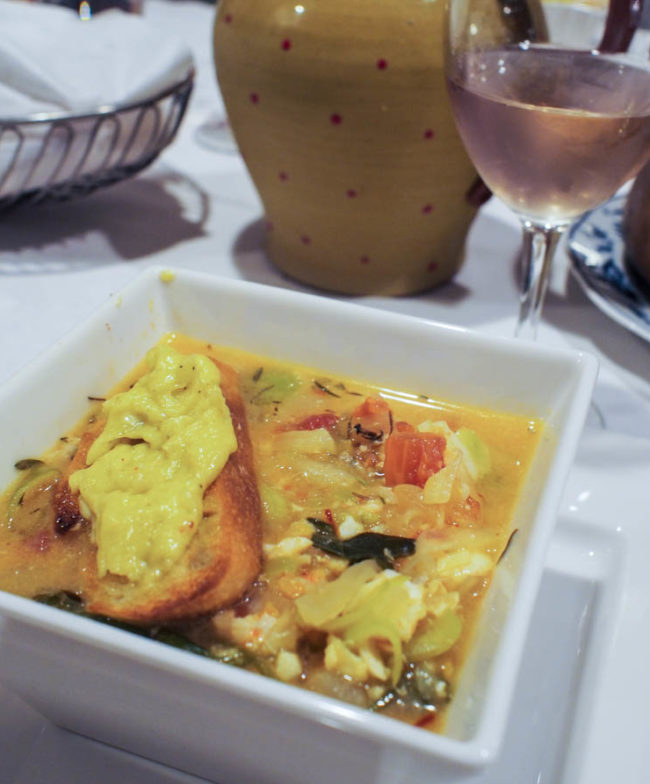 As mentioned above, I will be visiting Château Saint-Maur soon and will report back what I learned. I wonder how their reds and whites are. 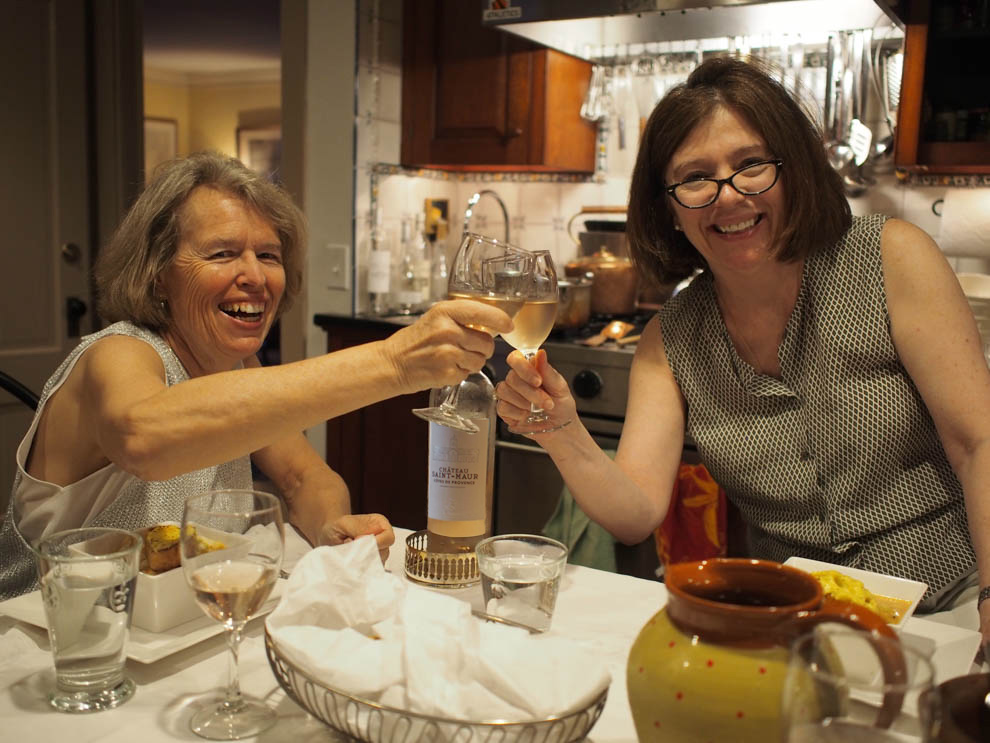