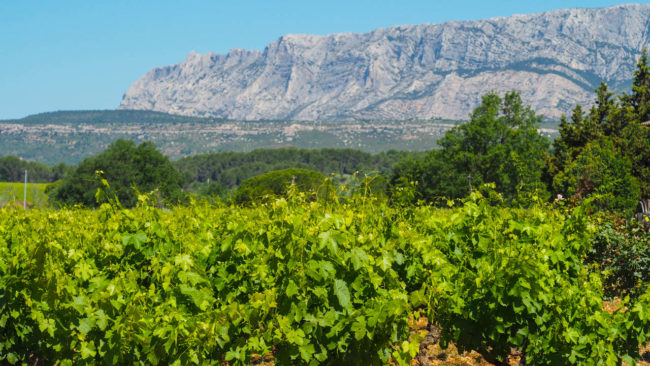 Vineyards at the foot of Mont Sainte Victoire

A Wine Star has become to wine what a Grammy is to music, an Oscar to film. Since their inaugural Wine Star Awards event in 2001, Wine Enthusiast Magazine has each year honored worldwide excellence and the exceptional achievements of men and women in all facets of the wine & beverage industry, from growers to retail outlets. This annual awards ceremony and lavish banquet is the hottest ticket in wine town with its stars being the legends, the innovators, the movers and shakers of the wine world.

September marked the eagerly awaited unveiling of this year’s five distinguished nominees in each of the 14 award categories, bringing the heady news that Provence has been nominated for Wine Region of the Year along with Champagne, France; Crete, Greece; Sonoma County, California; and Willamette Valley, Oregon.

Although criteria for inclusion in this category is a bit fuzzy, characteristics sought by Wine Enthusiast’s international panel of jurors are said to include not only excellence in wine quality but innovation, enthusiasm, creativity, drive, courage to succeed, and achievements that have left their mark on the monde du vin. The nomination announcement cited the meteoric rise in the quality and global popularity of Provence rosés over the past decade – with a stunning 58% sales volume increase in the U.S. last year alone – establishing them as the “gold standard” of pink and Provence as a region to watch.

This is not the first time Provence has been in the running for a coveted Wine Star. Also a nominated region in 2011, the trophy ultimately went to Prosecco, Italy. And, in 2014, Provence winemaker Sacha Lichine, of Chateau d’Esclans, took home the prize for European Winery of the Year.  Neighboring Rhône Valley was the first French wine region to be recognized with an award in 2010, for its “recent string of top vintages” and “growing environmental stewardship.”

It remains to be seen whether the community of Provence winemakers, researchers, marketers, and educators will cinch top honors for their gallant undertaking and its efficacy in revitalizing the caliber of the region’s wines as well as awareness and perception of quality in the eyes of the world. We do know that their spotlight has brightened.

Here at PWZ we will continue to pop our favorite Provence corks until the winners are announced in the special December 31st “Best of Year” Wine Star Awards issue of Wine Enthusiast.  The gourmet gala awards ceremony, traditionally held at the Beaux-Arts landmark New York Public Library on Fifth Avenue, is flying south to Miami (rosé territory!) this year to be held at Nobu Eden Roc at the end of January.