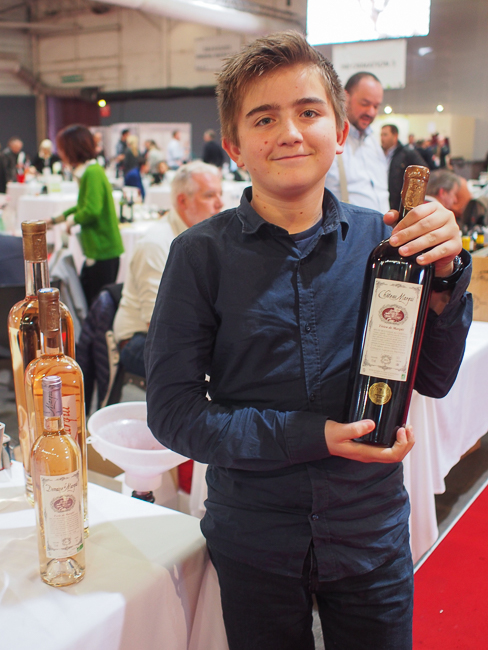 It’s not everyday one meets a handsome garçon who already has a bottle of wine named after him. Photo by W.T. Manfull

In early February, at Millesime Bio in Marseille, I had the pleasure of meeting Titien, 14-year-old son of Philippe Guillanton and Marie-Christine Baylet-Guillanton, who, with a little cajoling from his father and a couple of strange Americans, introduced the award-winning wine that bears his name to my husband and me. Neither the awkwardness of the moment nor his apparent bashfulness could conceal the deep-seated pride he felt holding his gorgeous bottle adorned with the label his parents helped design and filled with the wine produced in the château where he has spent most of his childhood.  He and his siblings may even have romped through the vines that bore the fruit for this cuvée.

Titien de Margüi is an AOP Côteaux Varois en Provence red blend of about two-thirds Syrah and, depending on the vintage, another third Cabernet Sauvignon or equal parts Cabernet Sauvignon and Grenache. Some of these grapes see a little oak while the others go into stainless steel for as much as 18 months. I am very fond of this wine.

Younger sister, Perle, also has a namesake bottle—Perle de Margüi—that is a splendid blend of Cinsault (40%) and Grenache (40%) topped off with equivalent parts of Syrah and Rolle. To me, this bottle is quintessentially Provence and, with its pleasing balance of fruit and acidity, goes equally well in the garden as an apéritif or on a linen-covered table for dinner.

Now, his older sister, Toscane, has her own wine. Toscane de Margüi, a perky rosé debuted at Millesime Bio 2017 where we had the pleasure of tasting it.   The palest pink in color, it is light and lively with just the right amount of red fruit on the palate and perhaps even some touches of minerality. The cepage of the new cuvée is Syrah (70%), Grenache (20%), and Rolle (10%).

Guillanton told me that Toscane got the news that her name will grace the label of a new cuvée on her 16th birthday in mid-February. She got to see a mock-up of the bottle (a new style for Château Margüi) and the  label (more contemporary in style) . “She was thrilled,” Guillanton told me. After bottling in April, new images will be unveiled for all of us to see.

I asked Guillanton whether they would be christening any other bottles of wine for their two oldest children, Florian and Roman.  “I don’t think so for now,” he told me. “The elder ones are happy drinking on someone else’s account!”

By the way, Château Margüi is located in the village of Châteauvert, just north of Brignoles in the Var department of Provence. It is an organic estate and, right now, all the wines are AOP Coteaux Varois en Provence. It is a great place to visit!