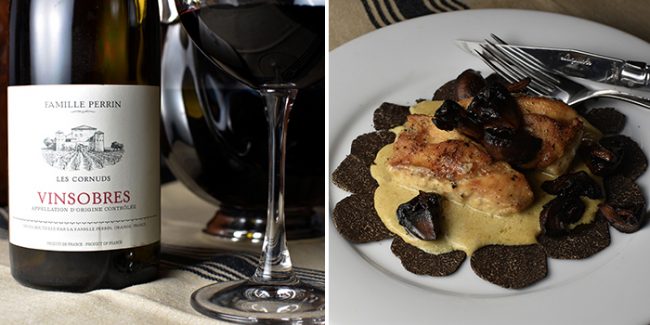 Somehow, almost every time I’ve attended a Broadway show, I ended up seeing an understudy in a major role. My disappointment prior to the show was generally palpable. Yet, once into the first act of these shows, I completely forgot I was watching the second string and always enjoyed the production thoroughly. Now that I think about it, of course the understudy is good… would they actually put in a less-than-stellar actor? No. And I wouldn’t do that for wine, either.

My “Broadway show” this week was Chicken with Truffles and Mushrooms (you can get the recipe on Cocoa & Lavender this week). One of the leading characters of the show was the truffle from Les Pastras in Provence, and the other a 2016 Domaine Les Hauts de Mercurol Crozes Hermitage. What a show that was to be; what a duet. Until the Crozes Hermitage came down with a serious case of cork taint. But, as they say in the business, “the show must go on.” Call in the understudy!

Checking my stock, I came across a 2016 Famille Perrin Vinsobres “Les Cornuds.” Comprised of half Grenache and half Syrah, I decided that this would be the best possible stand in for the Crozes Hermitage. While I am confident the Hermitage would have been a stellar pairing for my meal, the Vinsobres paired quite nicely with the recipe. (I ended up making two different sauces to make the pairing perfect. The first contained Madeira, which did not pair well with the wine.)

The color of the Vinsobres was a light ruby red and the nose, while pleasant, was not remarkable and bore the aromas of dark fruits. However, on the palate, the wine was quite complex with notes of blackberry, black cherry, licorice, pine, and leather. I would consider this a medium-bodied wine, and found it quite elegant with the chicken, and not overpowering for the delicate flavor of the truffle.

While this meal was prepared just for the two of us, had it been a dinner party, I might have been rather upset to have gotten to the “show” only to find the wine was corked. My new rule is to make sure that I have back ups ready for every occasion. This could happen to any wine, at any time — no matter how well you cared for the bottle. Who knows what happened beforehand? The other thing I learned is that one single ingredient — in this case the Madeira — can throw off a pairing quite easily. That was a surprise for me, as I had just assumed it would work. The sweetness of the Madeira really threw the Vinsobres off. Cognac might have worked but, in the end, I used some rosé to deglaze the pan and some chicken stock in place of the Madeira. It worked perfectly.

While not my very favorite wine, it is really quite good and a nice value for the price. Another bonus is that it seems pretty widely available in the U.S.