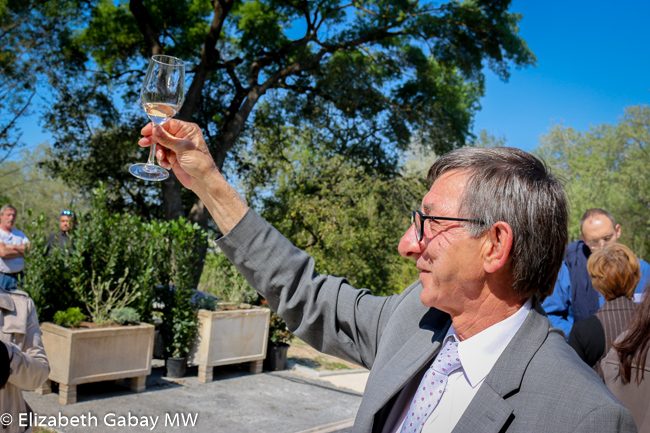 On the 6th of April, I joined in the celebrations for the opening of the refurbished Maison des Vins de Côtes de Provence on the route national 7 in Les Arcs in central Provence, and the start of the 40th anniversary for the Côtes de Provence appellation.

While Provence has been making wine for over 2000 years, its wine has not always had the fame it has today. Wine needs to reach foreign shores to be recognised, to be drunk by people who will write and praise the wine, to be acknowledged. For 2000 years the wines of Provence have been consumed, largely by locals. During the past 200 years it has been appreciated increasingly by tourists and over the past 20 years, thanks to the boom in rosé sales, it is highly regarded internationally. 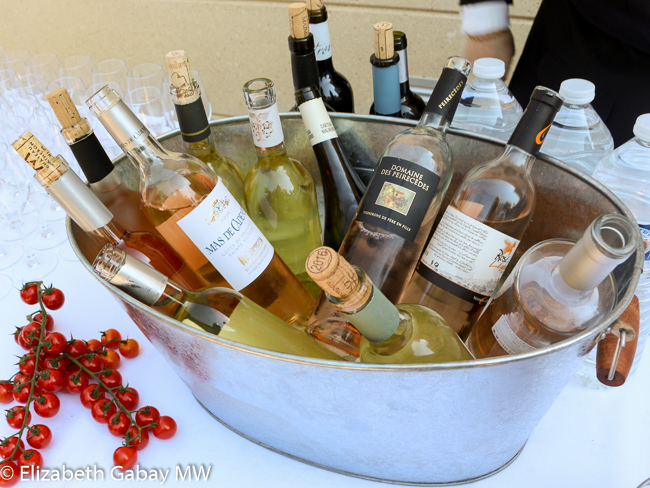 One of the many buckets of wine at the buffet at Maison des Vins de Côtes de Provence. Photo by Elizabeth Gabay MW

Back in 1933, a group of young winemakers, including Baron Henri Rasque de Laval, owner of Château Ste Roseline, came together to form the ‘Syndicat des propriétaires vignerons du Var’. Three years later, in 1936, the first five French appellations, Tavel, Châteauneuf-du-Pape, Monbazillac, Arbois and Cassis, were created. It seems quite fitting that the current trio of posters advertising the wines of Provence have a 1930s feel, harking back to the naissance of the modern appellation.

In 1977, the vast majority of winemakers came from local families. Names like Sumeire, Négrel, Ott, Gavoty, Gasquet, Savatier, Fabre, amongst others, with only a few outsiders, were investing money in viticultural properties. It is very different today where there are fewer and fewer small, family owned estates. Today there are more and more Hollywood stars, champagne houses, retired bankers and foreign investors owning domaines. 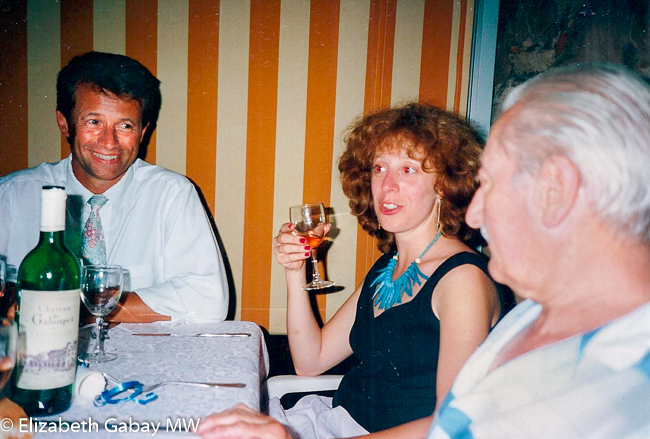 François Millo (left) and Baron Rasque de Laval (right) and me in 1992. Photo by Elizabeth Gabay

The 40th anniversary of the appellation is not just the celebration of the signing of the appellation by the INAO (Institut National des Appellations d’Origine) but the witnessing of the evolution of the region into one of considerable market importance, producing the market-leading rosés of Provence. The Conseil Interprofessionnel de Vins de Provence (CIVP) has grown too, largely under the leadership of François Millo from 1990 to 2015. Eric Dufavet led the bureau for two years and now a new director, Brice Eymard former manager of  Inter Rhône, is taking on the position of leading the region.

The CIVP represents over 600 wine producers and 40 négociants from the three main appellations of Provence: Côtes de Provence, Coteaux d’ Aix-en-Provence, and Coteaux Varois en Provence. The organisation’s members produce 96% of Provence’s Appellation d’Origine Protégée (AOP) wines. The total production in 2016 was about 176 million bottles, 88.5% of which was rosé.

As a fitting start to the celebrations, the showcase for the wines of the Côtes de Provence at the Maison des Vins in les Arcs was refurbished, with a grand opening ceremony on 6th April.

The Maison des Vins de Côtes de Provence was first opened in 1986, reflecting the importance of the growing number of tourists visiting the region. André Garnoux of La Vidaubanaise Coopérative Vinicole was President of the Syndicat at that time.  It was one of the oldest wine showcases in the country; in striking contrast to today’s showcase, just fifteen wines were displayed on rotation, changing every fortnight, with the winemakers available to sell their wines.

In the late 1980s, the publication of books such as A Year in Provence by Peter Mayle and release of films such as Jean de Florette and Manon des Sources based on Marcel Pagnol’s 1963 novels, served to further boost the number of tourists to the region. In 1992, Louis Fabre was elected president and he decided to enlarge the centre to create a showcase for 700 wines from the region. In 1994, the new centre was opened with a wine cellar, a tasting counter and shop where the wines could be purchased at cellar prices. Fabre, an active enthusiast for local gastronomy, added a restaurant (now closed) on the first floor, La Table à Vignes with chefs Jacques Chibois and Christian Boeuf. 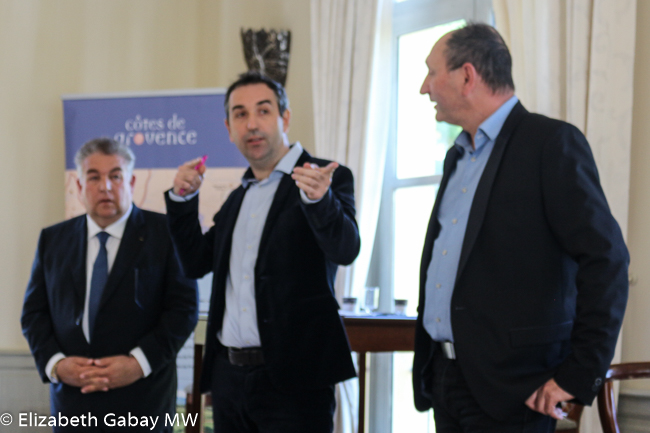 The April 6th opening started with a press conference, held by the Syndicat des Vins Côtes de Provence and led by President Eric Pastorino, Director Nicolas Garcia and Chairman Alain Baccino, in the former restaurant upstairs. (Plans for this space are still under discussion.) A brief summary of the history of the appellation and the role of the Maison des Vins put the importance of the newly refurbished space into context. We then went on to discuss the current market. 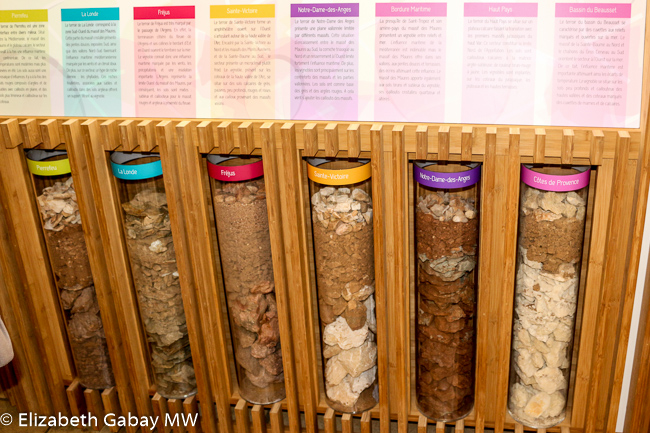 Display of the different terroirs of Côtes de Provence. Photo by Elizabeth Gabay

While there is a known ‘Provence style’, the growing importance of the denominations de terroir: Ste Victoire, Frejus, La Londe and Pierrefeu and future Notre Dame des Anges and their distinctive regional styles are being increasingly promoted. The wines in the Maison des Vins are displayed by geographic zone and an educational section shows a map and examples of the different terroirs.

We also discovered that Provence rosé has become a victim of its own success, with a growing number of rosés from other places including the word ‘Provence’ on the label, wrongly suggesting a connection. In an effort to defend the name and reputation of rosés from Provence, a new legal department was created in September 2016. Anaïs Huysmans, who heads this department, talked with me during the lunch and I was surprised at how many wines, sadly to say many in the US, are using the name of Provence on the label, causing customer confusion as to the origin of the wine. 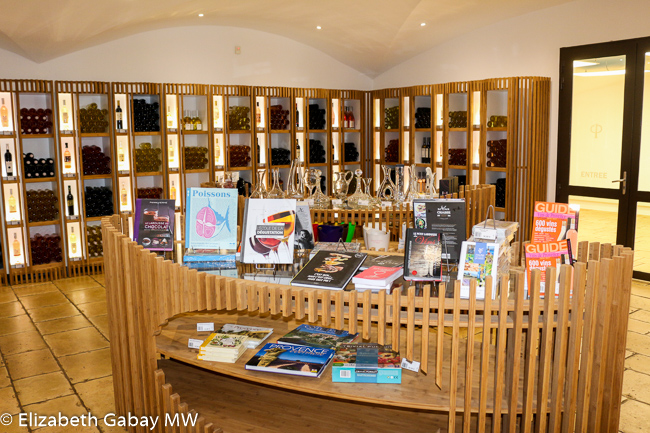 The new refurbishment, by Massimo Ambrosio of Design Divino, at a cost of €400,000, has kept to the same basic principle of the original wine centre, but instead of using only one half of the ground floor, the showroom fills the whole ground floor level. The idea behind this new centre has shifted slightly. No longer there just to welcome visitors and sell wine, there is a growing emphasis on education and information. 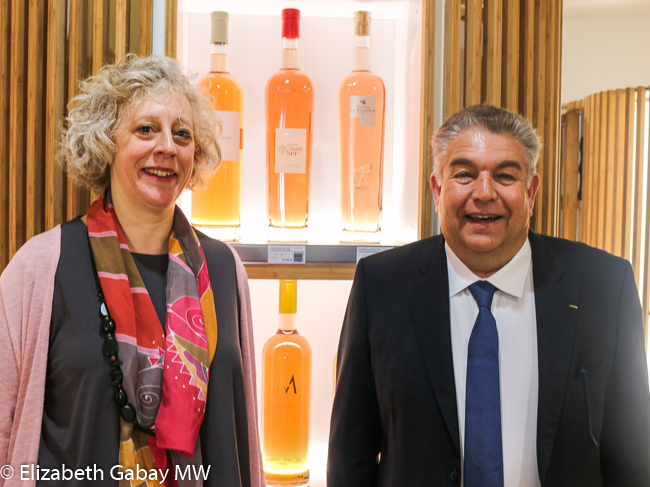 Me with Eric Pastorino, President of the Syndicat des Vins Côtes de Provence. Note the display of rosé in magnum in the background.

There are still over seven hundred wines on offer — up to three wines allowed per estate — now arranged geographically so that visitors can see other wines available in a similar style. A section for more mature red wines is located at the back and another section for wines available in magnum. The colours of the rosé and white wines are highlighted by careful lighting. At the tasting counter, a rotating selection of five wines in each colour can be tasted each week. Five sommeliers will be working at the centre to serve the wine and answer any questions. I particularly liked the use of wood for the display units which gave a warmth and natural feel to the space. 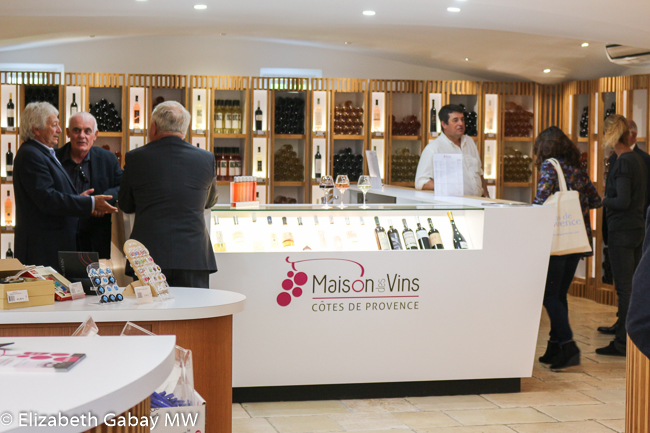 Design Divino has a portfolio covering the whole design process for anything within the world of wine from every element of packaging to the spaces in which wine is present and on the internet. This holistic approach is evident in the way the space is laid out which encourages visitors to walk round and explore.

The new centre certainly looks like it will fulfil its function of reflecting the current dynamic atmosphere of Provence and welcoming people who wish to learn more about the wines of the region. For properties without the facilities to welcome visitors, this showcase is vital. 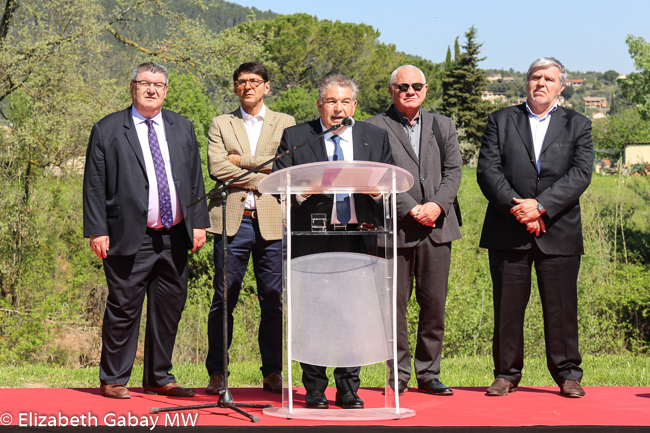 After the press conference and an exploration of the new centre, we spilled out into the bright April sunshine. A garden is going to be created for visitors to sit and enjoy the wines available at the centre. We listened to local politicians, including the mayor of Les Arcs and regional leaders, talk with enthusiasm of the importance of viticulture and tourism in Provence, and then the celebratory party started. 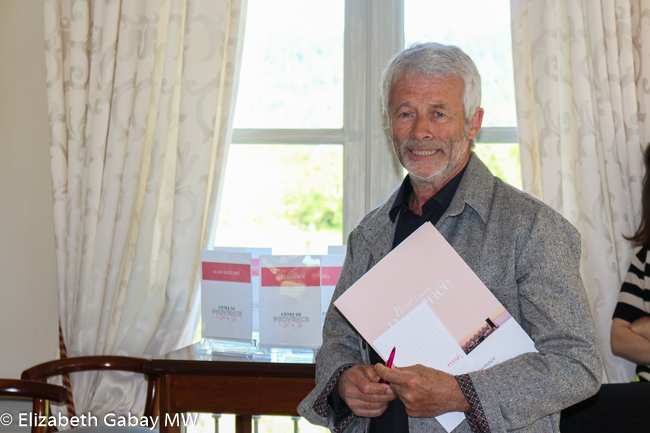 Winemakers, staff from the CIVP, past director François Millo and current director Brice Eymard, journalists, and politicians mingled until the early afternoon. François Millo’s new book on the history of the appellation, to be called simply Côtes de Provence, will be launched at the end of June. Although currently there are only plans to publish this in French, 75% of the book will be in photographs. 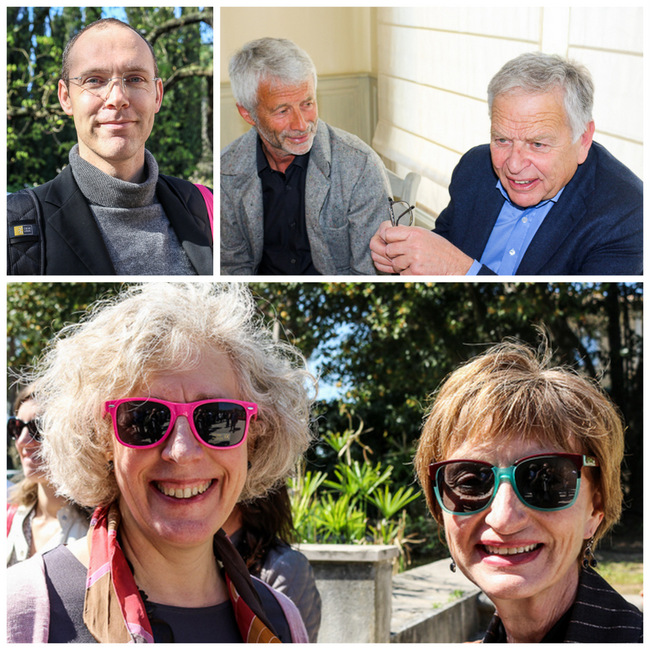 It was good to catch up with Esther Laushway, member of the Bouches du Rhône Sommelier Association and contributor to the Guide Gantie; Guy Négrel, owner of Mas de Cadenet and former president of the Syndicat; Mireille Conrath from the Syndicat who is responsible for the technical details of the appellation concerning terroir and grape varieties; and Michel Couderc, from the CIVP, responsible for fascinating statistics and analyses of the Provence rosé market; amongst others.

For anyone visiting Provence and interested in wine from the region, The Maison des Vins de Côtes de Provence is a great place to visit to discover more about the region. Another good stop is  Maison des Vins Coteaux Varois, located in the old monastery building next to the Alain Ducasse restaurant in l’Hostellerie de l’Abbaye de la Celle, near Brignoles.  (According to Rachel Renault, who works at this wine showcase, a refurbishment is also due at this centre.) A smaller centre for the wines of Côtes de Provence Sainte-Victoire is located in the Castle of Trets. 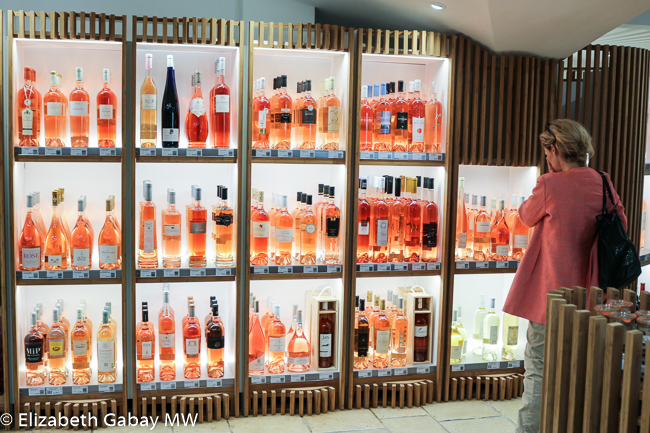 Ah, the choices: Rosés on display at Maison des Vins, where there are over 700 bottles of Côtes de Provence rosés. Photo by Elizabeth Gabay