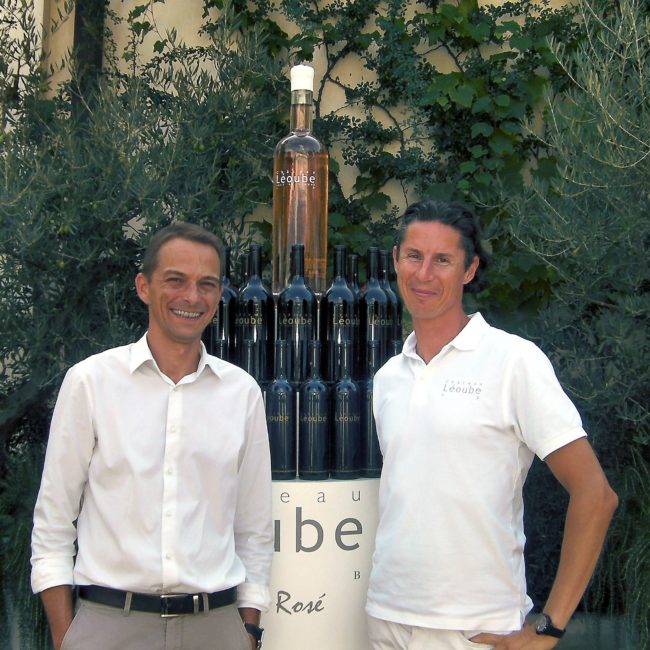 Red wine grabbed the spotlight from their much-lauded rosés at Château Léoube’s recent portes ouvertes on the Cap Bénat peninsula in Bormes-les-Mimosas. The star of the show was the first official vintage of Léoube Collector, a single varietal Cabernet Franc, a first of its kind in Provence. The event, which reportedly attracted 400 wine lovers (including yours truly) to the stunning 560-hectare (1383-acre) domaine hugging the shores of the Mediterranean, invited guests to taste red and white wines, sparkling rosé, and estate olive oils as well as tour the grounds and wine cave.

Upon arrival, with two friends on a picture perfect Côtes d’Azur afternoon, we were whisked off on a visit to the pristine state-of-the-art winery, completely renovated in 2009, by caviste Frederick Perotto, who would later describe to us the vinification process from pressing through maturation. A tasting followed of the vineyard’s three red wine cuvées, representing 20% of their annual production.

We began with a 2010 Rouge de Léoube Côtes de Provence (60% Syrah with equal amounts of Grenache and Cinsault), which is their lighter offering meant to be enjoyed in warm weather as well as cold. Les Forts de Léoube was next. Aged in wood for a minimum of nine months and a blend of equal parts Syrah, Grenache, Cinsault, and Cabernet Sauvignon, it had a rounder and more complex fruitiness with light tannins and minerality. The final red, and guest of honor, was the Léoube Collector, aged in new 600-liter French oak barrels for at least 16 months. Robust and silky with rich blackberry flavor and a peppery finish, it was definitely my favorite, recalling some of my best-loved Tuscan reds. Not to leave any glass unturned, we also sipped the elegant, light, and fruity Sparkling de Léoube, just conjured for a summer day and also, surprisingly, made from Cabernet Franc.

We tasted Léoube’s two superb olive oils while hobnobbing with the charming Export Director Jérôme Pernot. Also on hand was Romain Ott, the vineyard’s Operations Director and oenologist, fourth generation of the illustrious Domaines Ott family, who has modeled the château’s all organic vintage and philosophy since his arrival in 2000. Evidently lacking the requisite chutzpah, I was unable to wriggle my way through the many ardent and sometimes tenacious admirers encircling Ott for a tête-à-tête of snoop-worthy repartie. With Jérôme’s assistance, however, I was able to snatch a fetching photo of the Léoube duo.

I’ll be back. Perchance in the spring, when the rosé flows anew, to déjeuner at Café de Léoube on the sands of Pellegrin Beach. Oh but life is good!